Thursday I dropped off a small gift for my daughter, Principal of a Middle School in the school district I live in. It was a 2017-18 computer produced calendar from the always popular Education Minnesota booth at the Minnesota State Fair. “Happy New Year” I said. Teacher workshop week was about over, and school begins (in almost all Minnesota school districts) the day after Labor Day. Here’s the Education Minnesota “welcome back” ad for 2017. Here’s more. 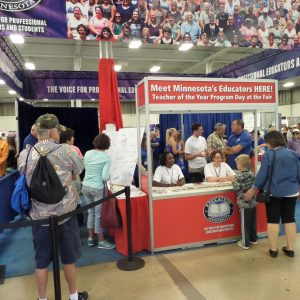 Education Minnesota booth at Minnesota State Fair. Corey Bulman, 2017 Teacher of the Year, was guest in the booth.

(Best as I recall, the photo calendar idea began as an expensive experiment in about 1990, which was the first year digital imaging connected to computer became commercially available (see history of digital imaging here). Back then, the organization was named Minnesota Education Association. It was, as stated, an expensive experiment, but as best I know every year since the photo calendars have become very popular, a tradition for many, and, I suppose, less expensive, too. It is a great connection of educators with the community.)

In one way or another over 50 million students are beginning their public school year (in Minnesota, this happens tomorrow). Here’s another view of the same data. Another 5 million or more public school employees (teachers, administrators, secretaries, cooks, bus drivers….) enter school with them. In all, that’s about one of five Americans.

All, beginning with school bus drivers, will have (or already have had) the annual nervous night before the first day of school as they arrive at their assigned places of work. Remember your own first days of the school year: new everything, starting a new year.

Of course, many other students attend parochial, or charter, or home school…but by far the largest, always, is the public school whose charter is to serve everyone, never a simple task.

Daughter Joni (referred to in first paragraph) is beginning her 14th year as a school administrator. Time flies. One of her major tasks, in addition to being Principal, is to supervise the completion of a new Middle School, which will replace her 1951 building in 2018. She’s equal to the task.

Such a huge institution as “public education” is easy to criticize. All you need is a spotlight and a single someone on which to focus criticism, and a microphone to publicize it. With over 50,000,000 potential targets, there is someone there who will be in the negative spotlight.

But look at the totality before embracing the criticism….

Public education is a noble institution whose mission is to take all, and do the best they can given scarce resources: often too large class sizes, infinite varieties of individual differences and dilemmas, from family crises, to differing abilities, and even personality conflicts between human beings (teachers and students and other school employees are human beings too, after all).

Welcome back. Our country is a richer place because of public education.

As noted, I have been very fortunate to be associated with public education my entire life.

A down side of this, as one ages, is to be witness at endings. Within the last month, I attended three memorials of public school teachers I knew, each unique persons. About seven people I knew were at the most recent reunion of the junior high school at which I taught in the 1960s and early 70s. The most recent death, Jim Peterson, former Fridley teacher, was the teacher I knew the least. His wife preceded him in death by a year, and he was felled quickly by a disease lurking inside him, so he didn’t have much time to say goodbyes.

I wrote the family afterwards that I had been to many memorials, but Jim’s, which he planned himself, was the most memorable, in all sorts of ways which don’t need to be described, except for the final song at the time we processed out of the sanctuary for the church ladies lunch.

The singer, who said she knew Jim as a neighbor and almost like a Dad, said he’d given her two songs to sing at dismissal.

The one I’ll always remember was the last, a delightful rendition of the “Sha na na” song. Not familiar with Sha Na Na? Here’s the YouTube version sung by the composer of the song back in 1969, and here’s the wiki story about Sha na na.

Imagine yourself walking out of church after a memorial service with this send off!

Do you know a teacher or a school employee or a student or one who has been? Wish them well, as this New Year begins.

POSTNOTE: My message to public schools, from “outside the walls”, remains on-line as it has been for many years. Read the message at Rethinking Community here.