Yesterday at Mass at Basilica of St. Mary visiting Priest, Fr. Pat Griffin, in his homily, included a snippet of Martin Luther King’s writing: “We are caught in an inescapable network of mutuality, tied in a single garment of destiny. Whatever affects one directly, affects all indirectly….”
I wrote enough snippets of the quote so that I could source it, and at home went to the search engine and, sure enough, there the exact quote was in his famous “Letter from Birmingham Jail”, written April 16, 1963.
That letter was primarily to religious leaders, Bishops and like rank, who were not, shall we say, being very supportive of efforts to end injustice against the Negroes, one hundred years after the Emancipation Proclamation was signed. Such change disrupted their notion of temporal influence.
Preceding Father Pat’s pull quote was this phrase by King: “I am cognizant of the interrelatedness of all communities and states….” and so on.
My takeaway from his message is that we’re all in this together, not gangs of individuals protecting our narrow interests, however righteous those interests seem to be.
I pulled my quote, above, from my copy of Martin Luther King’s “Why We Can’t Wait”, published early in 1964, primarily about the watershed Civil Rights year of 1963.* At the time, Dr. King was 34 years old.
The book remains in print, and I recommend it as required reading for anyone who wants to make a difference. 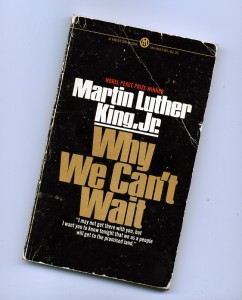 The book outlines how difficult it was, even then, to make a difference, and it emphasizes (at least so I saw) many things that most people don’t take time to acknowledge.
Dr. King’s hero and model, apparently, was someone most of us have never heard of: Fred Shuttlesworth.
And the Civil Rights Movement had difficulty convincing the Middle and Upper Class Negroes of the value of its mission to bring justice to those with less power and influence. Negroes who had by some chance or another risen above their “place” (say, owning a business) were reluctant to jeopardize their own perceived success to an uncertain cause. They were torn and too often they went with the status quo.
The most important chapter for me was the last one in the book, “The Days to Come”, in which Dr. King talked about the realities of the political process, including his personal acquaintance with three Presidents (Lyndon Johnson had just become President of the United States when the book was published. The others were Eisenhower and Kennedy.)
MLK was a rarity among us: not only was he a gifted and charismatic leader; but he recognized the reality leaders, including Presidents of the United States, face.
Most of King’s 1963 centered on Sheriff Bull Connors Birmingham AL. And at page 132 of Why We Can’t Wait he says this, recounting a comment by President Kennedy (then 46 years old) followed by his own commentary:
“Our Judgment of Bull Connor should not be too harsh,” he commented. “After all, in his way, he has done a good deal for civil rights legislation this year.”
King’s next sentence bears our attention: “It was the people who moved their leaders, not the leaders who moved the people,” King says.
Today, on the celebration of Martin Luther Kings birthday, and the public inauguration of President Obama, his words take on special meaning to all of us who care.
The ball is in OUR court.
* POSTNOTE:
My copy of Why We Can’t Wait came as a surprise gift from my friend, Lydia Howell, in Dec. 2006. It was a well-used copy, which I have even more well-used over the last six years.
Lydia’s note says “Now, more than ever, I find the life, work and words of Dr. King one of my deepest inspirations. I hope you…find [Why We Can’t Wait] useful….”
I surely have, Lydia.
I decided to first read the book one chapter each day, sitting in a pew at the Cathedral of St. Paul.
My book notes that I read the chapter “Letter From Birmingham Jail” on April 14, 2007, at 2 p.m., during a wedding. At the quotation cited by Father Griffin on Sunday, I have handwritten in the margin, “Bridal Procession”….
I have no idea who got married that day, or how they’re doing, but I can tell you this juxtaposition of thoughtfulness and words inspire continuing action.