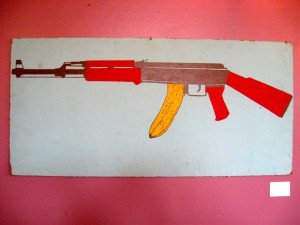 Dick Bernard: The Gun Issue is on the table, and that is good. Unfortunately, much of the conversation is as much based on reality as the above painting, which I saw in the Seward Cafe on Franklin Avenue in Minneapolis today. The painting does get at a reality, however…. The ladies in the below photo (same place and time) were having a civil conversation “under the gun” so to speak. If only we all could approach the gun conversation in the same civil manner.
There is lots of good information available, if one is interested in learning. The following is an example.
Recently I had occasion to send around to my own e-list a “Was the Second Amendment Adopted for Slaveholders?“, by MinnPost columnist and long-time well respected writer on Government issues Eric Black. The column links to a longer academic paper by Carl Bogus.
Both are worth a read. At minimum, read the last two paragraphs of Black’s commentary.
Greg Halbert, a good friend, fellow church usher and retired prosecutor, is on my list, and read the items, and provided his own summary view, in a note to Mr. Black.
Here is Greg’s note to Eric, with an appended additional note to myself.
I encourage you to read the Eric Black column and his accompanying links as well.
Greg Halbert to Eric Black Jan 19:
Very much enjoyed your article on the Second Amendment; you educated me greatly, as I am sure it educated many other people who read your piece.
There is another point regarding the right to possess firearms that troubles me. I receive numerous emails from conservative people who claim they have a right to possess a firearm for possible use if and when government becomes tyrannical.
Nothing much, that I have come across, is discussed regarding this claim. Our Revolutionary leaders believed the British government had become tyrannical so they launched the Revolutionary War. But, in doing so they committed treason against the king. Fortunately they won the war and gained independence from Great Britain. Had the British won the war, George Washington and others could well have been executed.
So here we sit in 2013 with certain citizens of the United States fearful the U. S. government will become tyrannical, so they possess firearms and ammunition for use if such tyranny develops.
The difficulty I have is just how is this tyranny defined? How will you, me and others know when our government becomes tyrannical? It is left unsaid, but I presume gun toters think they as individuals will determine when the government has become tyrannical. Then what?
Do these Second amendment worshippers actually think they will take on city police departments, county sheriffs, the national guard, FBI, etc?
Do people who assert this right to possess firearms for use against a tyrannical government understand that treason is another word to describe their actions if they ever come to that?
This tortured line of thinking has escaped any careful examination.
Greg Halbert to Dick Bernard Jan 19:
These so-called super patriots fail to appreciate they are really contemplating treason with this talk that they need arms and ammo to be prepared for response to a tyrannical government. Who determines the government is tyrannical? Anyone? Isn’t that anarchy? Sorry, I am running low on question marks so will close. 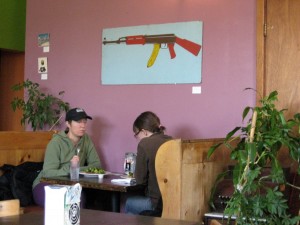