My friend, Lynn Elling, founder of World Citizen, is fond of a particular quotation of Gandhi: “If we are to teach real peace in this world, and if we are to carry on a real war against war, we shall have to begin with the children.”
I kept thinking of that phrase, and looking at the young people in the audience, when former student Jamie Nabozny gave a powerful presentation on his youthful experience of being bullied, as a student, years ago in Wisconsin.
(click on all photos to enlarge them) 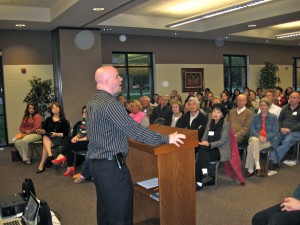 The Gandhi statement became all the more relevant when one member of the Panel, a State Senator, was unable to attend the Saturday night event because the State Legislature was in session – and lawmaking these days has become a public war of sorts over how to deal with issues, controversial or not. He could not be absent from the legislature because politics these days is not a matter of truly resolving disputes, rather of who “wins” and who “loses”, or who can be pinned with the loss.
It’s not “bullying”, of course, but we do have a societal pattern of waging war as a preferable option to seeking peace….
The Senator was there only by name and empty chair.
His was definitely an appropriately excused absence, but it emphasized for me the essence of our problem as a society. We Big People can be terrible role models for getting along and resolving issues, and if we’re going to learn a new way, it will have to be Little People, the children, who will do the teaching. And their teachers, not only in the classroom, who will have to role model. World Citizen is one of those working with helping teachers teach more constructive behaviors.
There were perhaps 150 of us in attendance at the gathering in Roseville. Joining Jamie was an expert panel: Julie Blaha, president of the Anoka-Hennepin Education Minnesota teacher’s union; Heather Kilgore, PACER/National Bullying Prevention Center; and Shiloh O’Rourke, Senior, Bloomington Jefferson HS. 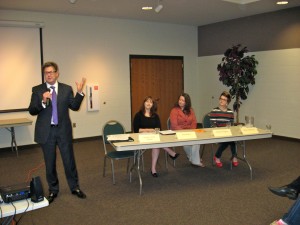 The difference between bullying now and when Jamie Nabozny went through his times of terror in Middle and High School is that a spotlight is now on the problem and it will not go away.
And todays kids and those associated directly with them are the ones who will diminish the problem, which will probably always exist, so long as our society continues to talk, as it does, in warfare terms about most everything including, for just one example, whether or not there will be a Vikings Stadium bill, and who will be blamed for it if it passes, or doesn’t (probably a main reason the State Senator couldn’t be with us.)
With Jamie, we watched the film, Bullied, which is his story. At one point he mentioned that over 90,000 copies of the film have been distributed. Schools can get a copy of the DVD free from the organization Teaching Tolerance.
We were reminded that in every bullying scenario there is a victim, perpetrator(s), and bystanders. Bystanders do not get a pass, whether adults or children.
We were also reminded that to ‘win’ at bullying is in the long run to ‘lose’: one of the main actors in Jamie’s trials at school has been in prison three separate times for the kind of behavior that he got away with in high school.
As the q&a session was about to end, two educators from Clear Springs Elementary School in Minnetonka rose to surprise Jamie and all of us, and gave Jamie several gifts including the shirt shown in the below photo. The saying is simple, and cleverly stated: “I stand tall. And you?” 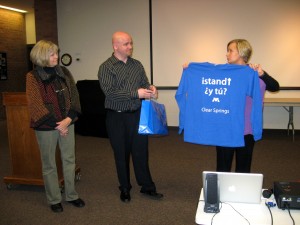 Sandy Curry (at left) and Melanie DeWitt present Jamie with a shirt saying "I stand tall. And you?" 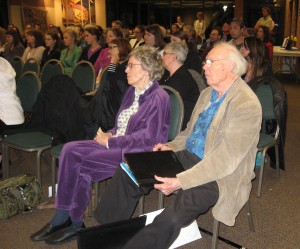 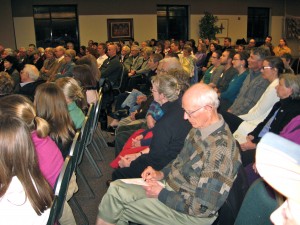