Back on April 1, my daughter Joni sent me an iPhone photo of her sister (and my daughter) Heather.
(click on photos to enlarge) 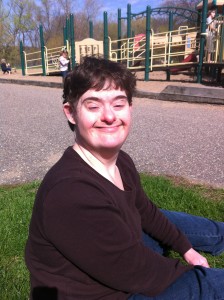 Yesterday Heather and I went bowling. We did two lines. She got a strike on her first frame. She won the first line, I won the second. No need to do the third (or for you to know the score, either!) Suffice to say that I didn’t take a dive to lose, and she didn’t cheat to win. It was all fair and square on Lane 11 at Mattie’s Lanes in South St. Paul MN. We were the only folks in the place. It was fun.
Today* Heather is having a new Pacemaker installed at Children’s Hospital in Minneapolis. She has lived with a Pacemaker for over 30 of her 36 years. This makes her a pretty exceptional individual in the realm of pacemaker survival rates, I’m told.
Heather, Down Syndrome, has seen a lot of life in her 36 years.
And she’s brought a lot of joy to a lot of lives in those years. Kids like her with exceptional abilities can and do have that affect on people who know them. Those with special abilities look at life a bit differently than we so-called ‘normals’.
When I was young, kids like Heather were people nobody knew much what to do with.
I remember Johnny in a tiny town in which I lived for several years. He was, they would likely say, retarded, or some less polite word: moron, idiot, imbecile…. He was older than we younger kids, and he lived at home. We’d taunt him in the assorted ways kids can, and sooner or later he’d get very angry, and because he was so big he could be dangerous.
We’d run, and he’d go home, and the next day he’d be back.
No special education in those days.
My grandparents lived in the town that had what they used to call the “State School for the Feeble Minded”, and in those years, while awareness was beginning to raise (this was in the 1940s), these folks were warehoused and when we came to visit, and went to the local park, we went by the school and on a summer day they were warehoused behind a fence, sort of like animals in a zoo, no deal differentiation that I knew of.
Things have changed now, of course, and kids like Heather in all their exceptionalness add richness to many lives, not to mention aiding the economy of which they are a part in many different ways.
Heather spends her weekdays at Proact Inc, an extraordinary partnership in Eagan MN. Earlier this week I took her there, and she was proudly wearing her Twins shirt. 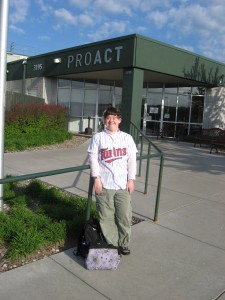 The technology she’ll have implanted today is a far cry from the technology of over 30 years ago. In those years, the Pacemaker had one heart rate; the current technology allows Heather to do things unimaginable in those early years, such as playing softball in a Special Olympics league called RAVE in which parents and others give and receive the joy of participation.
I can put Heather in the middle of many “circles”.
To each, she brings more gifts than she takes. 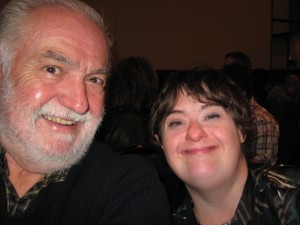 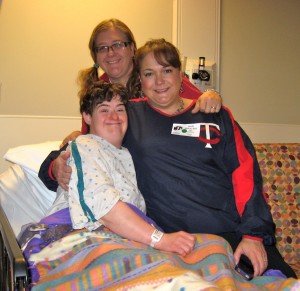