Towards the end of yesterday’s most stimulating conference of Parents United for Public Schools, a slide appeared on the screen:
“I skate to where the puck will be,
not to where it has been.”
Wayne Gretzky
Gretzky was the almost superhuman hockey player who made it all look easy. I had the privilege of seeing him in person, one time, at the old Bloomington Met Center in the mid-1980s. We were at center ice perhaps a half dozen rows up, and when Wayne Gretzky was in the neighborhood, you knew you were in the presence of greatness, even amongst other great National Hockey League players.
“I skate to where the puck will be….” What a great metaphor for success in anything. Possibility replaces impossibility.
Our guest speakers were truly a dynamic duo: Dr. Tom Gillaspy and Dr. Tom Stinson. They’ve been advisors to the high and mighty in Minnesota and even folks like me have been privileged to hear them speak in other settings. Their specialties tend to make the eyes of mere mortals glaze over: economics and demography. But like Gretzky and his hockey puck, they make it all make sense, and make it interesting to boot!
In fact, much to my surprise, this mornings Minneapolis Star Tribune gave Tom Gillaspy page one treatment in the Variety Section. Imagine that: a demographer featured on page one of the entertainment section of the newspaper! (And I can say that Tom Stinson deserves equal time and treatment.)
I wish their message were on film. But it isn’t.
(click on photos to enlarge them) 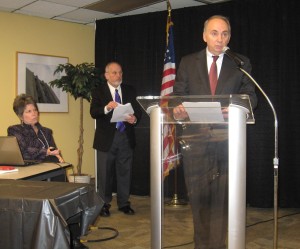 Second best is that their entire Power Point presentation is accessible at the Parents United website. It is here (click on “keynote presentation”), and very well worth your time.
We were also privileged to hear brief and inspiring messages from MN Gov. Mark Dayton and Education Commissioner Brenda Casselius. Sen Al Franken appeared on video. 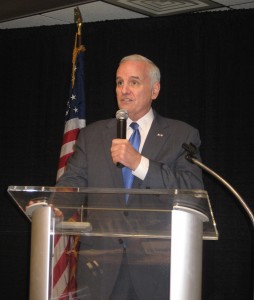 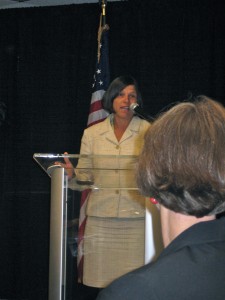 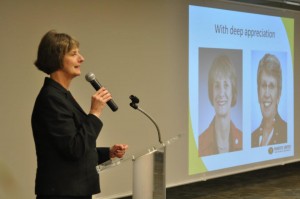 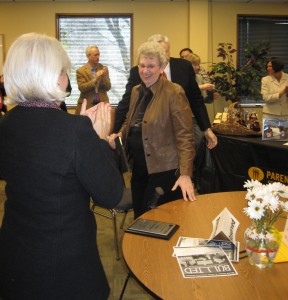 It is always interesting to watch how people like these leaders, who we in the public are taught to view as combatants, treat each other: with respect. Senator Olson, who I knew as a public educator in long ago Anoka-Hennepin days, received her Award from former Democrat Senator and current lobbyist Kathy Saltzman (my former Senator); and Rep Greiling received her Award from Roseville School Superintendent John Thein. Sen. Olson got her start in public education; Rep Greiling got her political start on the Roseville School Board.
We saw, Monday, and we need more of, these highly visible lessons in political competition and respect as opposed to vicious political combat and loathing. There is a big difference.
We saw it in Roseville, yesterday. Absent teaching, we need to learn this skill ourselves.
https://thoughtstowardsabetterworld.org/wp-content/uploads/2022/04/thoughts-300x138-1.jpg 0 0 dickbernard https://thoughtstowardsabetterworld.org/wp-content/uploads/2022/04/thoughts-300x138-1.jpg dickbernard2012-04-17 14:24:552012-04-17 14:24:55#554 – Dick Bernard: Parents United for Public Schools, looking forward

#470 – Dick Bernard: Public Schools, and the kids in them, matter
0 replies