I’m very near 72 years of age. The people of my and my parents generation created the Middle Class, and have been huge beneficiaries of it, in endless ways, from Medicare to the GI Bill to Unions, and on an on and on. For the younger generation, as Joni Mitchell’s popular song goes, they may not “know what you’ve got ’til it’s gone….”
Still, the “Army” to destroy the Middle Class we enjoyed seems to have been recruited from the same older generation. I see this in endless hateful, destructive and dishonest “forwards” from people I know from my generation and older.
I review and respond to the “forwards” I get. The vast majority are lies, pure and simple, from manipulation of photographs to manipulation of data. So little “truth” comes around, including TV ads, talk radio and the like, that only the foolish will believe any of it.
These days I think a great deal of a book published in England in 1949 entitled “1984” by George Orwell. It is a famous book, and everyone should read it again, especially those who send those forwards. Orwell’s model apparently was the post-WWII Soviet Union of Stalin, with elements of Hitler’s Germany.
It is pretty clear to me, these days, that unfettered American Capitalism would like to achieve the same objective – easily manipulated, passive and compliant Proles – that 1984s “Big Brother” did by using the same methods.
We are todays Proles. 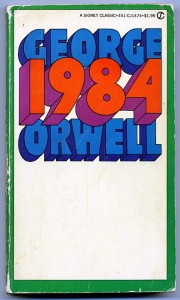 The book, 1984, first came into my life when the actual year 1984 was far in the future and television was in its infancy and still a novelty.
Computers and ease of editing of images and text was unknown at the time I first read 1984.
But 1984 was about all of these things. “Telescreens” were everywhere, broadcasting what Orwell called the “two minute hate” frequently and at any time. These also doubled as surveillance cameras, recording every persons every move.
Nobody, nothing, was safe from Big Brother.
There was even a new language: “Newspeak”:
“WAR IS PEACE”
“FREEDOM IS SLAVERY”
“IGNORANCE IS STRENGTH”.
Big Brother thrived because of cultivated fear of an unseen enemy he could describe, far away. This enemy was one to be feared and hated, and Big Brother was the only savior.
In my opinion, 1984 has become the playbook for contemporary Right Wing politics in this country of ours. The book simply reflects the exploitable weaknesses of humanity, and those don’t change.
I think of this 1984 every time I see the latest insulting and lie-filled “forward”; or see some example where information is manipulated so that some imagined “failure” of the President (or Democrats, or Unions…) is manufactured.
Indeed, since President Obama has been inaugurated, the mission of his enemies has been to make him fail by any means necessary, and then shamelessly lie about why the failure occurred. Similarly, my “class” – liberal, Union, is similarly characterized. Newspeak 2012: “Failure is Success”.
In 1984s world, the citizenry (Proles) was dominated and completely controlled and settled into a life of happy mediocrity: the housewife happily hung out the wash to dry; entertainment was getting drunk on cheap gin in the neighborhood saloon.
Nobody trusted anybody. The Two Minute Hate and “Big Brother is watching you” were very effective.
The main character, Winston, took a stab at breaking out of the mold, and for awhile seemed to be succeeding.
It is useful to remember the ending scene of 1984. Winston is personally confronted by his greatest fear. He surrenders to the fear. He “sees the light”.
The book ends with these words: “He loved Big Brother”.
POSTNOTE: Orwell died in 1950 only 46 years of age and only a year after publication of 1984. He ends his book with Big Brother still in complete control.
Is it so simple in the real world…? Well, we can read history. A long succession of “Big Brothers” learned their omnipotence was not permanent. Many of them ended up dead, and not of natural causes.
What is our fate as a nation? We American Proles will decide, beginning in November, 2012 by how we vote, or whether we vote at all.
We choose if we succeed or fail as a society.
Directly related: here and here.