It is not hard for me to remember Pearl Harbor Day. Seventy years ago my Dad’s brother, my Uncle Frank, near the end of his 6th year on the USS Arizona, lost his life aboard the ship. I’m old enough to have “met” him, in Long Beach CA, five months before he died. The caption on the photo, written by his mother, my grandmother Josephine, is succinct: “the first time we had our family together for seven years and also the last.” December 7, 1941 and the days following were chaotic. My Dad’s memories, as recorded years later, are in this single page: Bernard Frank Pearl Har001
Immediately came WWII for the U.S. Many kinfolk, including seven of his cousins from a single family in Winnipeg (one killed in action, some in U.S., others in Canadian forces), went off to war Collette boys Winnipeg001.
Last year I sent the Pearl Harbor museum all of the photos and records I have of Uncle Frank, and the photos have been posted ever since on Facebook. (The family photo referred to above is near the end of the album.)
WWII was very short for Uncle Frank. Then came the rest of it.
NOTE: I have written several posts about Uncle Frank. Here are links to the others: Dec. 7, 2009, Dec. 7, 2010, Dec. 9, 2010, Jan. 2,2011, Dec. 7, 2011, May 28, 2012.
Ah, “War”. A good friend and I recently engaged in a conversation about the complicated business called “War” and he asked this question: “What do you think are the rational lessons learned from WWII?”
It’s a fair question, and below are some thoughts on the topic from someone (myself), born on the edge of WW II (1940) who’s a military veteran from a family full of military veterans dating from at least the MN-ND Indian War of 1862-63 through, very recently, Afghanistan.
click on photo to enlarge 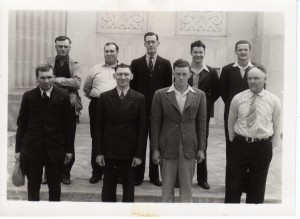 Here’s my informal list.
1. War begets more and ever worse future War. For example, the defeat, impoverishment and humiliation of the Germans at the end of WWI gave Hitler his base for seeking revenge.
2. The American isolationist attitude during Hitler’s rise was not helpful to containing the evil objectives of the Third Reich. This was both pacifist and (primarily) “me first” attitude in an unholy alliance: what was going on in Europe and the Far East during the 1930s was, supposedly, not our problem. By the time the U.S. engaged after December 7, 1941, the die was cast for a horrible, long war. Corollary: politically, spotlighting an ‘enemy’ is far better – and more deadly – than nurturing true ‘friends’.
3. War is much less about heroism than it is about fear and and the reality of death. There is a tendency to feel invincible when you’re young, but that disappears when your buddy beside you ends up dead and you’re at the mercy of the next projectile with your name on it. A very young cousin of mine, American citizen perhaps three years old, was killed in the liberation of Manila, in the supposed sanctuary of a church yard in early 1945. It will never be known whose shrapnel it was that hit her, in her mothers arms, that day. It matters not….
4. War casualties are far more than simply being killed or physically injured. PTSD and other kinds of mental illness is now a known outcome; displacement of non-combatants; homelessness, suicide, property loss and the like are also major (and largely uncounted) casualties from war.
5. Winning a war is illusory and short-term at best. Those who think they’ve won better begin preparing for the next war, which they may lose.
6. The Marshall Plan, following World War II, was a good outcome of War. But it would have been an infinitely better outcome of Peace not preceded by war.
7. War is great for business (but Peace would be even better). “Swords beaten into ploughshares” to tackle future threatening things like resource scarcity, climate change etc., would be great for business, and great for us all, but require changes that business is not inclined to make. The business rule of thumb which I believe prevails: we don’t want it until we can control it and make money off of it.
8. War enables new tyrants, each of whom thinks they’ve figured out how to avoid the mistakes of the previous vanquished victors of earlier wars.
9. The only really new developments of War post WWII are a) horrors of nuclear annihilation (the U.S. has a huge arsenal which is worthless unless we wish to annihilate ourselves); b) terrorism is a new tool, and we have far more home-grown domestic anti-government terrorists than evil others.

10. “They who live by the sword will die by the sword” is ever truer and deadlier. Mass annihilation is ever more possible. In the recent wars, Iraq and Afghanistan, the U.S. human casualty count was relatively low. This was overshadowed by huge Iraqi casualties, and population destabilization and displacement, and massive debts incurred by the U.S. to wage war. We bred resentment, not friendship. While we were not brought to our knees physically, this time, we were nearly destroyed economically. Here is the U.S. physical casualty count from past wars, from The World Almanac and Book of Facts 2007. War Casualties U.S.001
Reasonable estimates of deaths from war in all countries in the the previous century approach 100,000,000. War is usually,in the end, a creature of convenience than of necessity – an easy but deadly way to attempt to solve problems. That is another rational learning, in my opinion….
With the greatest respect for all victims of war, I urge Peace.
https://thoughtstowardsabetterworld.org/wp-content/uploads/2022/04/thoughts-300x138-1.jpg 0 0 dickbernard https://thoughtstowardsabetterworld.org/wp-content/uploads/2022/04/thoughts-300x138-1.jpg dickbernard2011-12-07 09:57:422011-12-07 09:57:42#486 -Dick Bernard: The 70th Anniversary of Pearl Harbor