“[My sister] Florence was born [Nov. 3, 1918] the year World War I ended. [Nov. 11, 1918] the hired girl and I were out in the snow chasing chickens into the coop so they wouldnt freeze when there was a great long train whistle from the Grand Rapids [ND] railroad track [5 miles away]. In the house there was a long, long telephone ringing to signify the end of World War I.”
Esther Busch Bernard memories, p. 122 of Pioneers, the Busch-Berning family history (2005).
November 11 I attended both the Armistice and Veterans Day events held one block apart, roughly halfway between the State Capitol and Cathedral of St. Paul.
That context is important.
I think I have participated in most if not all Armistice Day events since 2002.
This year I intentionally broadened my context, and distanced myself from all participants in both events. I wanted to catch more of the resonance or emotional distance between those who remember Armistice Day (reminding us of the end of WW I on the 11th hour of the 11th day of the 11th month of 1918, continuing in many countries to this day); and Veteran’s Day (which permanently replaced Armistice Day in the U.S. in 1954.) I wandered between the groups, one city block apart, easily visible to each other.
On the way to the events, yesterday, I stopped at my barber, a Marine combat veteran in Vietnam whose brother, also a Marine, was killed in Vietnam. Tom and I are long-time good friends. He angled a little towards conversation about war and peace this day; I chose to angle away. We talked of other things.
On the wall was a flat screen television tuned to the sports network, ESPN. The coverage this day included live film from a U.S. military base in Germany. Part of the coverage included a field game, similar to what kids would play, only in this case it was Hand Grenade toss, to see which GI participant could come closest to nailing a humanoid figure in the eye of a bullseye with a hand grenade facsimile. Not much focus on peace, there.
Haircut over I went to the Veterans/Armistice day field of memories.
There seemed to be roughly equal numbers of outside visitors at each, though the Veterans group was much more formal and fancier, including people in uniform, lots of flags, and what appeared to be a high school band. Both groups were heavily laced with military veterans.
I noted, really for the first time in many years coming here, a large sculpture of a soldier with what I’d call pleading outstretched arms. He stood roughly half way between the groups, primarily facing the Veterans Day event at the Vietnam Memorial Wall. 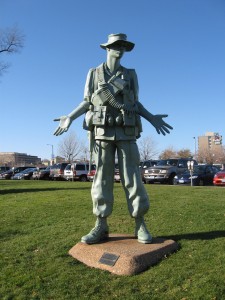 He had been standing there since 1982, the plaque said.
11:00 was approaching and I returned to the Armistice Day gathering to witness the bell-ringing, 11 times, to signify 11-11-11. The speaker holding our bell said that the Cathedral of St. Paul down the street had agreed to ring their bells 11 times this year – a first. We waited. 11:00 came and went, no bells. The group rang its own bell.
I left, and went over to the Veterans gathering just in time to see their ceremony, three men brought forth a rifle, a pair of boots and a helmet to signify a fallen soldier. The MC ordered three rifle volleys from the armed color guard.
I found myself thinking back to that sculpture between the groups. The caption said “Why do you forget us?” as the sculpted soldier faced the Veterans gathering.
Behind him, I thought to myself, was an Armistice group that might change that quotation only slightly. “Why do you forget [“the war to end all wars”]?”
I left the parking lot. 11:15 and still no bells from the Cathedral, looming over us a few short blocks away. The silence was deafening.
There is a story waiting to be told….
Regarding “the resonance or emotional distance”? Remember the distinction between 11 bells and 3 volleys of rifle fire. That catches it, in my seeing and hearing. At one site, the symbol of honor was a rifle, serving as a body of a soldier, with boots and helmet. At the other, a simple bell of peace. 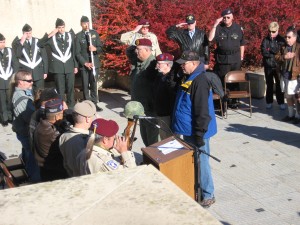 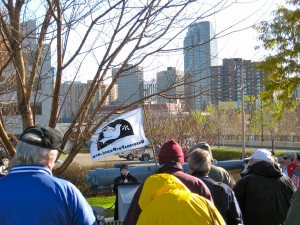