See comment at end of post
Annelee Woodstrom is 83 years young today, and what a remarkable 83 years it has been.  She’s one of my role models.  What a life.  What an example.
We saw her reading from her book “War Child, Growing Up in Adolf Hitler’s Germany” one week ago today.  We were among 75 people in a church conference room, all listening carefully.  You could “hear a pin drop”, literally.  Each time I hear her speak, her presentation is more compelling and powerful. 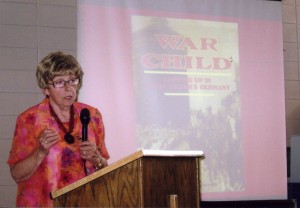 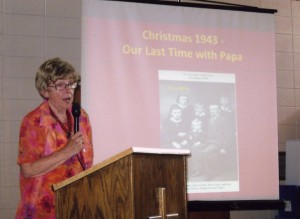 In background, Annelee's family in 1943

Annelee’s father was ultimately drafted into the German Army in a construction engineering capacity.  Except for coming home around Christmas of 1943, he was never seen again.  They believe he died in a Russian prison perhaps after the war, but no one is absolutely sure.
H.H. Busch died in 1933, the year Hitler came to power, and the Great Depression was raging in the United States.  Except for the above letter, I have no further accounts by or about him.
UPDATE SEP 20, 2009 from Jim Fuller:
A key point in the piece is that the period between WWI and WWII is a “black hole” for most people, which means that they can have no real understanding of why the Nazis in Germany and Fascists in Italy rose so readily to power in their respective countries.
A painless way to gain considerable knowledge of that era, and have a great time in the process, is to read the novels of Alan Furst.  They are superb, and beautifully written stories of spies and emigre intrigue in Europe between the world wars, but they also are filled with factual detail that one rarely, if ever, finds in history books. Another excellent novel that provides great historical insight is Erich Maria Remarque’s “Black Obelisque.”  (Remarque was the author of “All quiet On the Western Front,” which in its early chapters also tells much about that between-wars period.
https://thoughtstowardsabetterworld.org/wp-content/uploads/2022/04/thoughts-300x138-1.jpg 0 0 dickbernard https://thoughtstowardsabetterworld.org/wp-content/uploads/2022/04/thoughts-300x138-1.jpg dickbernard2009-09-20 05:46:462009-09-20 05:46:46#88 – Dick Bernard: A Happy Birthday to Annelee, and a time to reflect on War