Friday I went to a luncheon celebrating 50 years history of an organization for which I once served a one year term as President (2000-2001).
The group, Minnesota School Public Relations Association (MinnSPRA) has always been a small organization, probably never exceeding 150 members. It began in 1960, and affiliated with a national group, the National School Public Relations Association (NSPRA) which dates back to 1940. In each case, as in all cases of such grassroots organizations, some dedicated persons came together in a common interest to help each other and, in this case, public education.
I didn’t count, but it appeared that at least 20 of we former Presidents took the time to travel to this luncheon. It was an impressive turnout, a reunion for many of us, a renewal of some old esprit d’corps. A time to tell stories of the past. 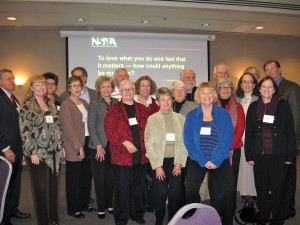 Small organizations like MinnSPRA come and go. When such a group endures for 50 years, it is a testimony to people of vision and persistence who ride the usually small waves, and often endure the cruel rip tides, which come with advocating for most anything in an organized fashion. For an organization to last 50 years is a testimony to the tenacity and dedication of many. A 50 year marriage is a great accomplishment for two people. A voluntary organization living for 50 years endures constant change every year, including in the “cast of characters” who come on ‘stage’ (like me). Survival is more than a small miracle, well worth celebrating!
At our tables we all were asked to discuss four questions about MinnSPRA: 1) Best memory; 2) Best Program All-time; 3) Person who embodies/embodied MinnSPRA; 4) why, in one particular year, we decided to change our name from M-NSPRA to MinnSPRA. (With respect to #4, I was involved, then, but I couldn’t recall exactly why – that’s what 20 years can do!)
With many tables, there came much rich feedback, bringing back long-forgotten memories of really very significant events that happened and passed into history.
I thought to myself that MinnSPRA’s history really was a series of small parts which when put together created a very substantial whole. In themselves, those small parts didn’t seem very important at the time. Those long years ago when I was sitting first on MinnSPRA’s Board, and then took a one-year turn as President, it often seemed that we weren’t accomplishing anything. But when added to all the other small accomplishments, we had accomplished a great deal. We had left a very substantial base from which to continue to build. The next generation chose to continue building.
Our Keynote speaker, Rich Bagin, Executive Director of NSPRA, took us through a very significant discussion of change in the past 50 years. In 15 segments he talked about things Public Relations (PR) people “used to believe” as contrasted to what they “now believe”. With a single exception, the reality of the other fifteen beliefs had changed very significantly in 50 years.
The essential message Mr. Bagin conveyed, it seemed to me, was “live in the past, die in the past”.
I went to the reunion today unsure what to expect.
I came home very happy that I had attended.
Best wishes to MinnSPRA for another 50 years even better than the first 50! 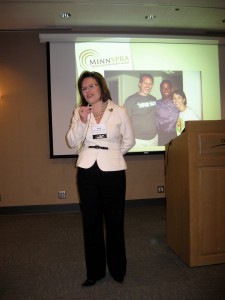 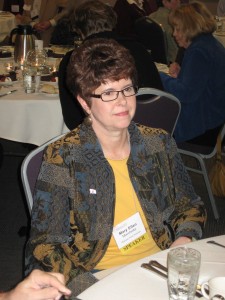 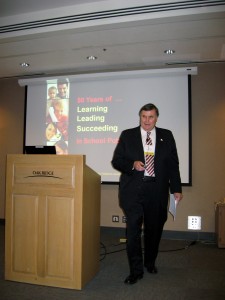