Back on September 5, 2010, I posted “A Close Encounter With a Mosque“, remembering a friendship in the 8th grade in Ross, North Dakota in 1953-54.
In the mysterious ways such things work, someone saw the blog post, liked it, and on November 13, 2010, I found myself on stage at the annual celebration and awards banquet of the Islamic Resource Group of Minnesota (IRG)*, and my blog post** printed in their program booklet. I said to the assembled group that I was both astonished, and very, very honored to be with them. The evening was a powerful and inspirational one, with very good attendance considering the first major snowstorm of the season had just struck us here in Minnesota.
“Mysterious ways” indeed. I have long believed that there is no such thing as a “coincidence”. Everything has some purpose. Some would call this “luck”, or “fate” or attribute good or bad occurrences to something caused by a higher power, using that same higher power to justify good or bad actions.
Whatever the reason, I felt very privileged and humbled to be in that hotel banquet room last night.
There is a formulaic aspect to such events as IRG’s celebration: food, speeches, awards….
These all happened last night.
I chose to notice who was in that room, and who it was that really made IRG a success. They were, by and large, young people: people in their 30s or younger. Yes, there were the ‘gray-maned’ folks like myself and my spouse, but this was a celebration by and about youth.
There was another aspect of this gathering that stood out for me. This was a group that was about understanding, not fear and division; a group whose intention is to promote dialogue rather than positioning and taking sides. To be for, not against. The “Building Bridges Awards” were for Media, Education, Interfaith, Community Leadership and the “IRG Speaker of the Year”. Four of the five Award winners were young people. 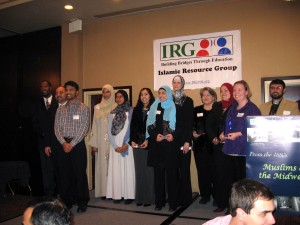 This photo and following: people recognized for their work with IRG 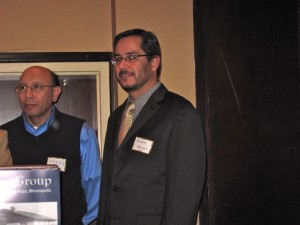 Keynote speaker Daniel Tutt, himself a young person, helped us to understand some of the reasons for the dynamics which lead to the politics of division, which in turn lead to the kinds of campaigns which exploit the issues of such as the Ground Zero Mosque (why I wrote the previously mentioned September 5 blog post), fear and loathing of “illegals”, Gays, etc., etc., etc. 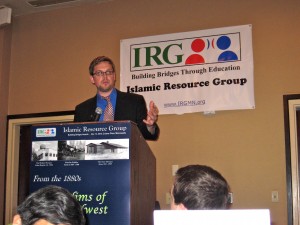 Daniel knows of what he speaks. He is program director of the national program 20,000 Dialogues, a program of Unity Productions Foundation.
As Daniel was speaking it occurred to me that the major controversial wedge issues, like the “Ground Zero Mosque”, suddenly went silent immediately after the election November 2.
Before November 2 they were eminently useful, politically. Now they aren’t, but simply put on the shelf till the next election….
There is a window of opportunity now to, as IRG emphasized, “Build Bridges”.
Indeed, as I heard last evening, those bridges are already being built, as Emmett and his family and Muslim Community in rural North Dakota were building from 1902 forward.
Whatever your issue, talking – dialogue – is a strong part of the answer of breaking down barriers. “Building Bridges”.
* – The IRG website is currently under re-construction, but still includes useful information about the group.
** – On November 13, I updated the September 5 blog post to include some additional information.
https://thoughtstowardsabetterworld.org/wp-content/uploads/2022/04/thoughts-300x138-1.jpg 0 0 dickbernard https://thoughtstowardsabetterworld.org/wp-content/uploads/2022/04/thoughts-300x138-1.jpg dickbernard2010-11-14 10:28:442010-11-14 10:28:44#278 – Dick Bernard: Muslims of the Midwest: From the 1880s to 2010