Today, my brother is 65. He’s the cherub in the blankets in the photo taken probably in very early 1946. If you could see this photo close up, even then you can imagine him squirming, hoping to break the shackles of those blankets and play in that snow! He would have been ready, that’s for sure. 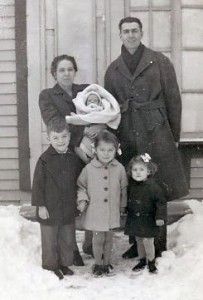 65.
I’m old enough so I can legitimately say “he’s just a kid”. And I know many people who can say, to me, that I’m “just a kid”. Strange how Time just keeps on walking.
For years, literally, I’ve done the mental exercise of remembering this or that at a certain age. It helps to give perspective.
For instance, my four grandparents were 68, 60, 59 and 58 when I was born. When I became old enough to have a notion who they were, they were really, really, really old.
65.
In our society it has been, for many years, a ‘marker’ with unusual significance. It is an appropriate marker of a transition point from the work world to the retired world. It is not a place set in stone. I know people who continue to be employed beyond 65, some because they want to be, others because they need to be. On the other hand, I recently talked to a friend who told me he became the adult in charge of most of the work on their farm when he turned 13 due to his Dad’s disability. He “grew up” rather soon.
In the end analysis the number is less significant than what one does with the time between the beginning, the present and the end.
Best, I think, that one can show that he or she contributed to making the greater world a better place because of his or her being here.
Later today we’ll be flying to visit my brother and friends in his long-time home of Salt Lake City.
Yesterday I was remembering a long-ago trip which took my then-family through Salt Lake City in June, 1971. I dug out the slides from that trip and found the one below which shows my children, then, at the Bingham Copper Mine outside of Salt Lake City. 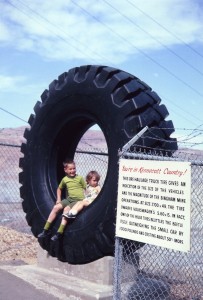 Tom and Joni June, 1971, at Kennicott Copper Mine

This day, November 17, 2010, Tom is driving his trucking route somewhere in the Great Plains outside of Denver; Joni is doing her work as a school Principal in a suburban Middle School. Tom and Jennifer have a married daughter and son-in-law “as we speak”; Joni and John have a couple of kids well up in elementary school. Time flies.
Happy Birthday, Frank.
To the rest of us, I recall one of Dad’s many admonishments as a school teacher to we reluctant scholars looking at the clock, waiting for school to end: “Time passes. Will you?”
https://thoughtstowardsabetterworld.org/wp-content/uploads/2022/04/thoughts-300x138-1.jpg 0 0 dickbernard https://thoughtstowardsabetterworld.org/wp-content/uploads/2022/04/thoughts-300x138-1.jpg dickbernard2010-11-17 06:37:422010-11-17 06:37:42#279 – Dick Bernard: On Turning 65