PRE-NOTE to everyone:  August 6 and 9 are the 77th anniversary of the atomic bombing of Hiroshima and Nagasaki.  There is a significant on-line event relating to this with segments Aug 3, 6, 10, 17, 24, 31.  Details are here.  Pre-registration is required for each segment, and early registration is recommended.  This is worth your time.

To Minnesotans, Primary Election Day is August 9.  Know the candidates and the issues and VOTE well-informed.  More information here.  Click on the box “What’s on my ballot?” if not certain of issues in your area.

(Monday and Tuesday, August 1&2 I plan to have two politics-specific posts.  Do check back.)

Following are several items.  One or more may be of interest to you.

We were enroute home July 20, and an apple beckoned, but I had nothing to cut it with.

At the time I was the passenger, and I remembered that in the glove box was Uncle Vincent’s key ring, which included the pocket knife which had given him long and faithful service.   That key ring went everywhere with him, farm and town; fishing, church….  The knife was a multi-purpose tool, not a weapon.  It would do things like cut rhubarb in the garden, and such.

I took the knife and ‘cleaned’ it like back on the farm.  A nearby ragged handkerchief did the duty.

The apple was delicious.

Why, you ask, was that key ring in the car?  Uncle Vince died over 7 years ago, the last of a large farm family which included my mother, his sister, (who was 16 when he was born).

Vince lost custody of his car keys a year earlier when his residence changed to the memory care unit of the LaMoure Nursing home.  Not an easy transition at age 89, but necessary.

I became the custodian of the keys, seldom had use for any of them. But they’ll be with me until I depart this earth, a reminder, I guess, of many rich conversations with my Uncle, and of family.  Thanks, Vince. 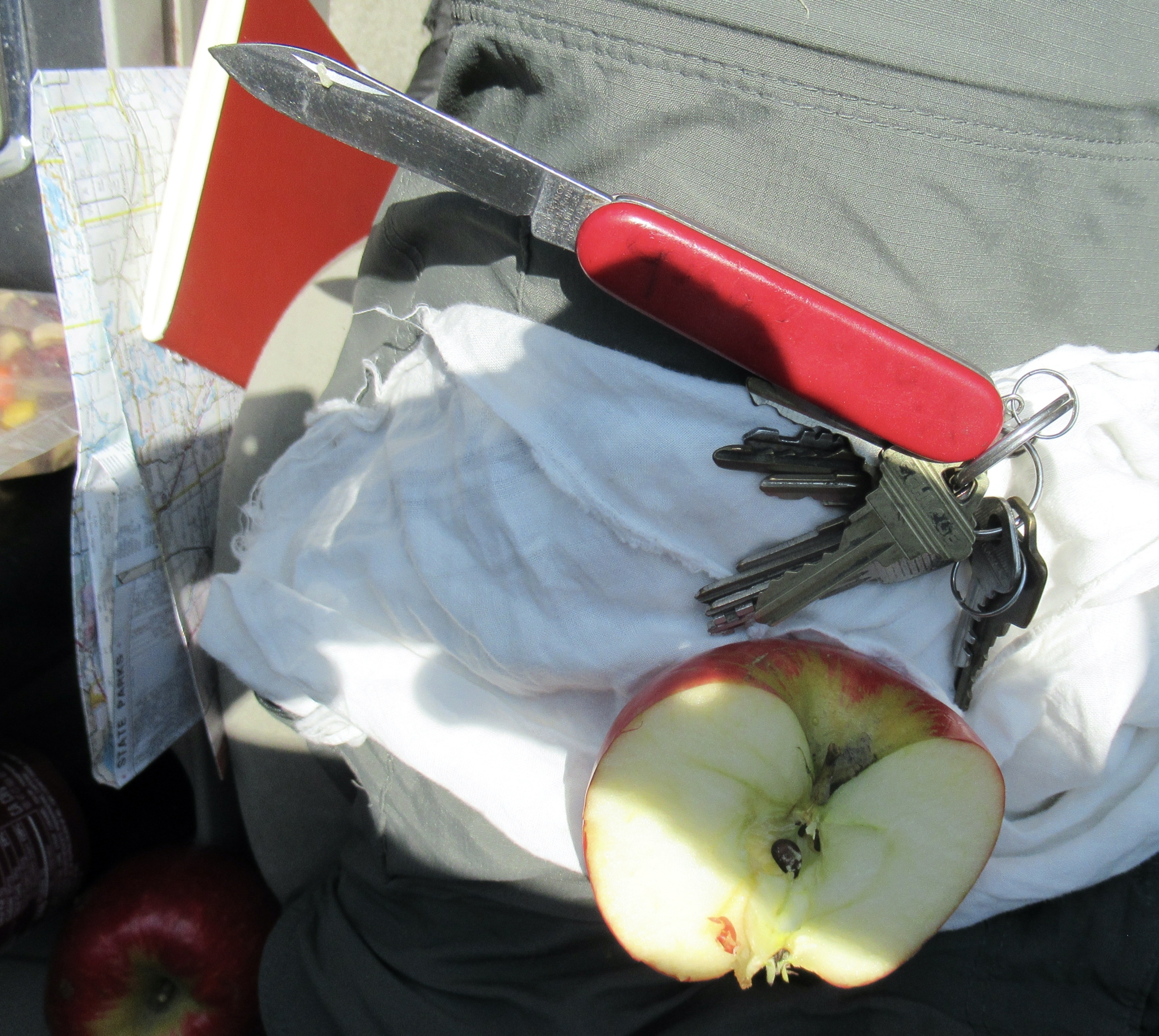 Two days earlier, I’d been up to rural Huot, near Red Lake Falls, MN, for a visit with my long time friend, retired Professor of French, and passionate French-Canadian, Virgil Benoit.

Virgil has been an advocate for over 40 years, and Oxbow at Old Crossing (new Facebook presence) is his most recent project.  Oxbow probably best conveys his true legacy, which is building community; truly crossing boundaries.

Virgil showed me the various projects in process on the oxbow.  They include tree planting and traditional gardening.  They involve more people than himself,  and the ideas are multifaceted.  Oxbow is a community working together.

Recently he sent a newsletter, with a description of the initiative.  Here is a copy for your perusal. Benoit Virgil Oxbow Fdn. 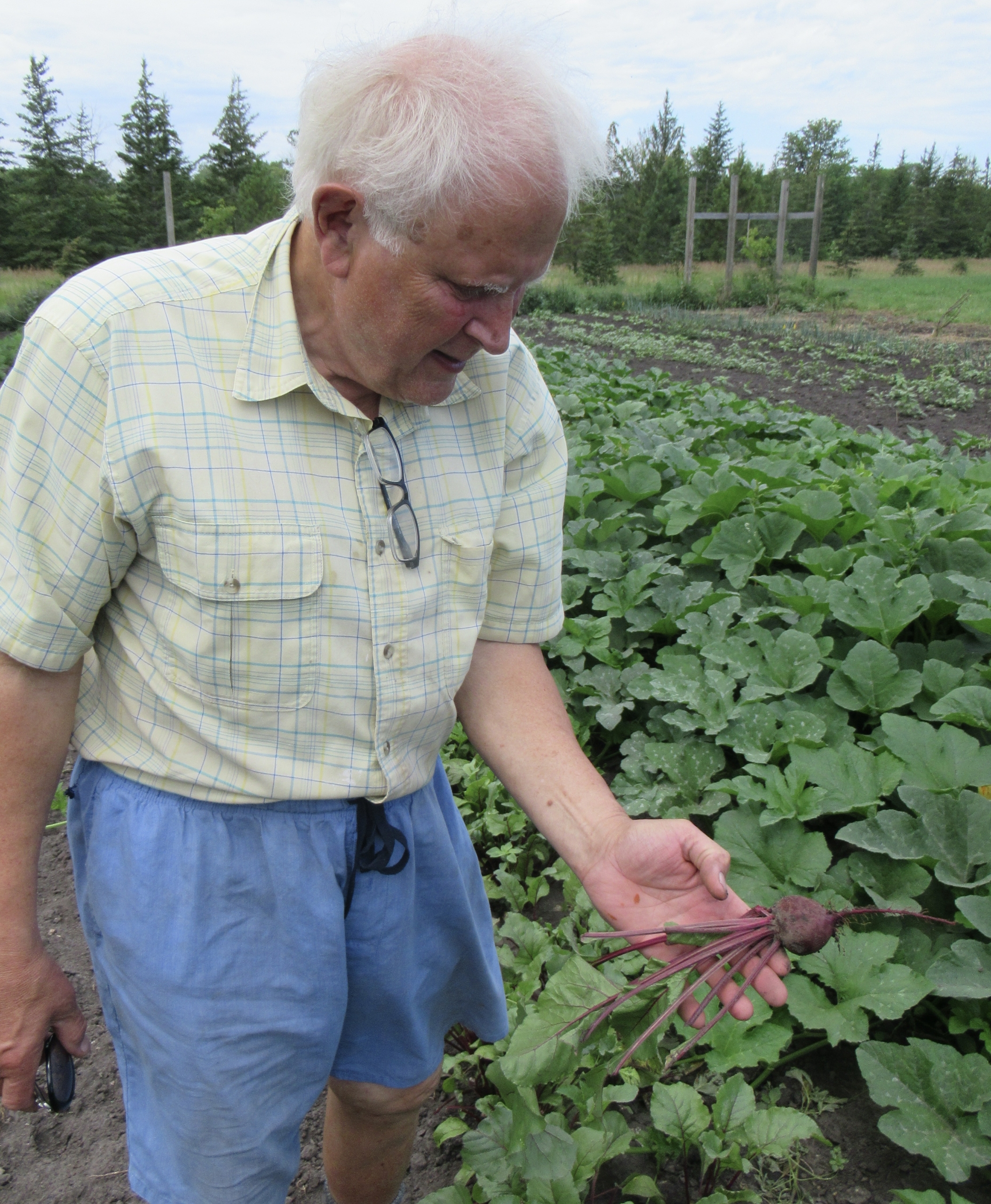 The trip north centered around our friend, Annelee, soon to be 96, in a time of transition in her own very long, productive and interesting life.

Much of her adult life, Annelee was a teacher in a northern Minnesota town.  I got a first look at her school on this trip, and found an unanticipated plaque on the wall of the school, with 13 other members of the “Hall of Fame”.  The light situation didn’t mitigate for a good photo, but here’s what I saw on the wall of the school about my friend. 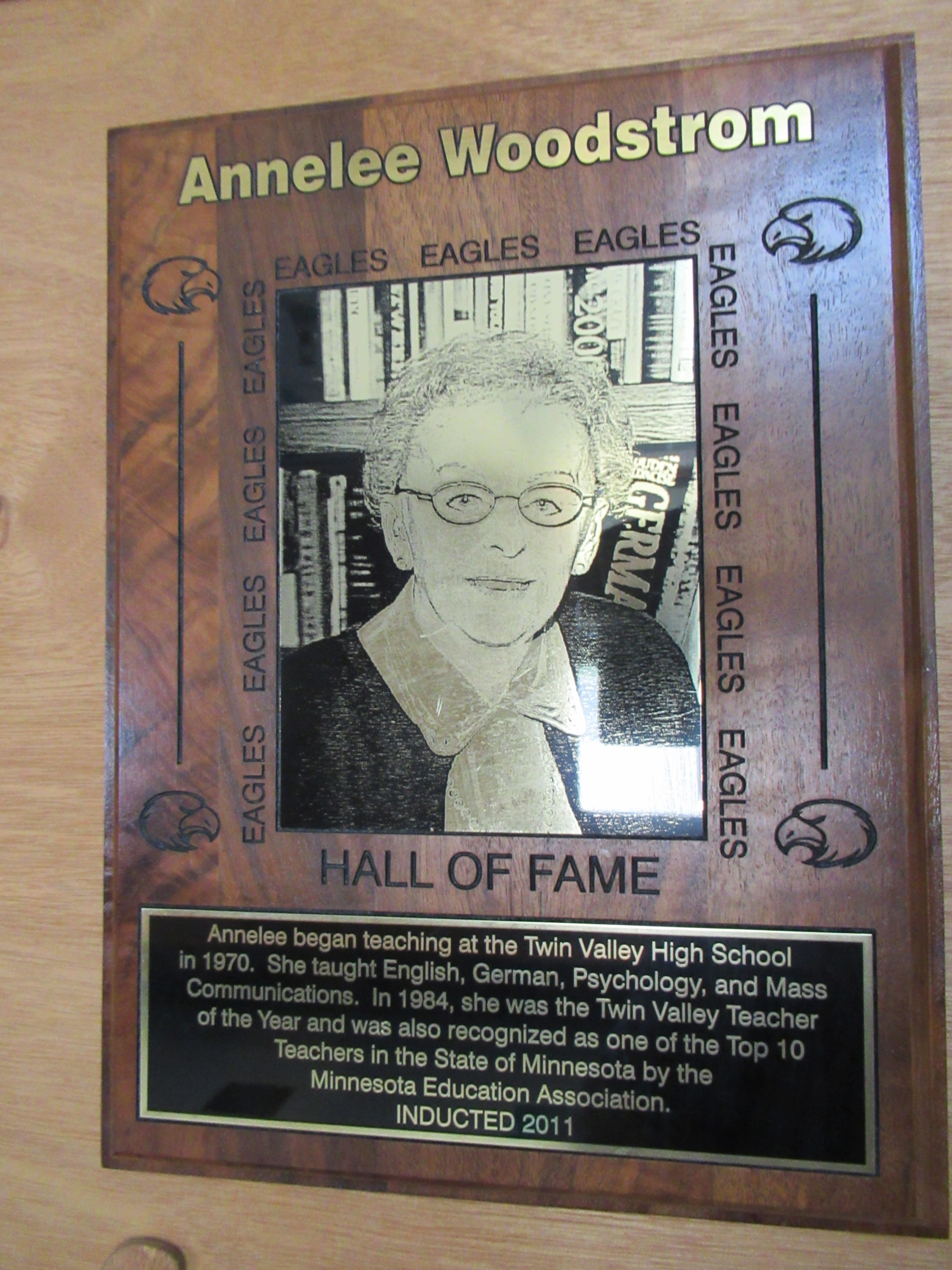 Annelee was (and still is) an outstanding teacher, another unsung hero, as is Virgil, was Vincent, and so many others, everywhere who we come across in our daily lives..

4.  A Learning Opportunity for You: A Private Universe

Back in the late 1980s, my friend, Kathy, then a 5th grade teacher, sent me a handout from some inservice she had attended.  It had spoke to her.  I read it, and I kept it.

A couple of weeks ago for whatever reason she sent me the exact same handout she’d sent years ago.  It caused me to look at it much more carefully, and it spoke to me, and I think it can speak to all of us in these days when getting stuck in our own certainty is a major problem for our very society.

I think it came to me because she and I had recently chatted about the difficulty of conversing about politics in general, even with people we know well.

This time, I looked up A Private Universe on the internet, and I invite you to do the same.  In 1987 it was a learning research project with junior high school students, which apparently endures.

I invite you to in particular watch the videos #1 (the original, featuring junior high kids) and 8 (Q&A some years later with the ‘star’ of the original), which won’t take much of your time, and then translate their topic to your own contemporary idea about communicating with people with differing opinions from your own about most anything.

I think you’ll find the time well spent, and learn something about yourself as well.

Here’s the sheet Kathy sent me, not complete, but you’ll get the idea: Private Universe 1980s.  The videos will add much more.

We learn in small and sometimes seemingly insignificant increments.  For me, simply in this post, the “teachers” have been Mom, Virgil, Kathy, Annelee and many, many more.

from Fred, re life in Russia:  Bill sent this very interesting take on the long suffering Russian people and the great writers who documented their eternal misery under despotism.

This article from the Atlantic, though less than encouraging, speaks to the hope that Russia can still overcome its long tradition of submission to despotism.
*

from Molly: Excellent and important article from Tom Snyder.  Not an upper of a piece, but important, thought-provoking,  and right on….

PS: if you’ve not read yet Snyder’s 2017 book On Tyranny, it is an important and fairly brief read…

Or: What the War in Ukraine (and the Coup in America) is Actually About

I have been particularly interested in this last post of yours. The family and rural environment that has been yours in your youth is so well described that I thought I was part of it.
Your analysis of the Ukraine/Russia war is given here a light that we don’t hear so often
Finally, your view on the US political ambiance seems easy to understand. It is precious for me as a European.
Thank you for sharing your thoughts. I read them regularly but do not always react and maybe I should.
I respect your continuous work of writing and I am honored to receive this blog of yours.
I hope you keep well as it seems.
I will be back to the US with my film over the Fall and, of course, you will be informed amongst the first since you are my friend and you are in it!!!
*
from Christina, now in her 90s:
My youngest sister spent a lot of time with us. She was only three when we got married. We had a baby one year after we were married and she was almost like one of our kids.  When  mom and dad moved to Fargo, and she was older, she spent most of her summers with us.

One day she was out bailing and had trouble with the twine string that was binding the bales and when John went to help her he said “A feller should always have a jackknife in his pocket.”  she said “but I don’t have a jack knife” and he pulled a jackknife out of his pocket.  It had a broken blade, and gave it to her and said “now you’ve got a jackknife.” Now that she’s been married and her kids are grown and married her kids found that knife in her treasury stuff.  They asked her about that knife…and she told them don’t ever touch that knife.  It’s mine.