Yesterday, literally, I was at the University of Minnesota for some more medical preliminary before surgery now set for February 17.  I went down a little early so I could take a photo of the old University Hospital as it appears today: 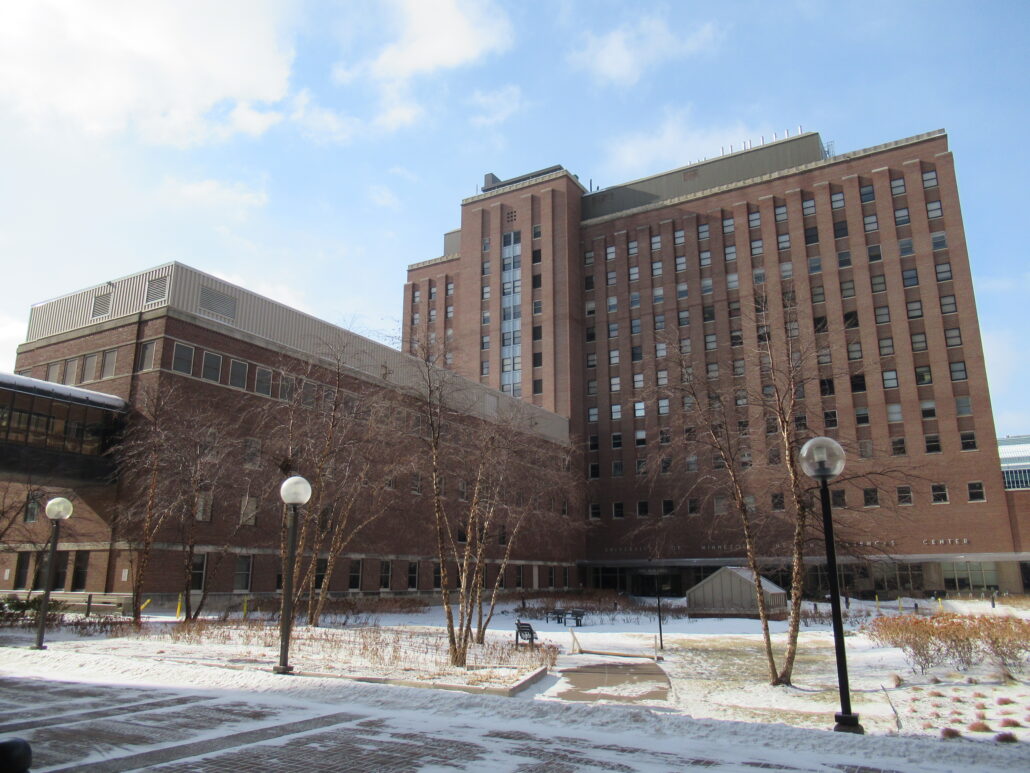 My date with the surgeon is at the old hospital.  I first saw U Hospital in late May, 1965.  The exterior remains the same.  The inside and surrounding area has changed a great deal over the years.

57 years ago I brought my then-wife to University Hospital for a hoped for kidney transplant.  She spent most of that time on the first floor of the wing to the left in the picture, and my recollection is that she died on the 8th floor of the hospital on July 24, 1965.  It was a very long two months for two young people from North Dakota, who’d never been to Minneapolis before.  Our son, then a year old, turns 58 this month.

I think my surgery is on the third floor of the wing where Barbara was hospitalized.

Memories come back from that very difficult summer.

I recall that the summer of 1965 was when a strip of homes, a couple of blocks wide and several miles long, between downtown Minneapolis and Hwy 62 to the south, were razed for the pending construction of the southbound and now old I-35W.  My minds-eye has a photo of the clear-cutting of neighborhoods to build that freeway.  The first place we visited on arrival in Minneapolis was an apartment on Clinton Ave S near Honeywell, which was one of the first to be demolished that summer.

The Foshay Tower was still the skyscraper of Minneapolis, its 28 or so floors now dwarfed by surrounding buildings.  Somewhere is a photo I have from back in that day, taken by brother John in 1968, but it’s not nearby.  Below is a family picture I took at Christmas 1969. 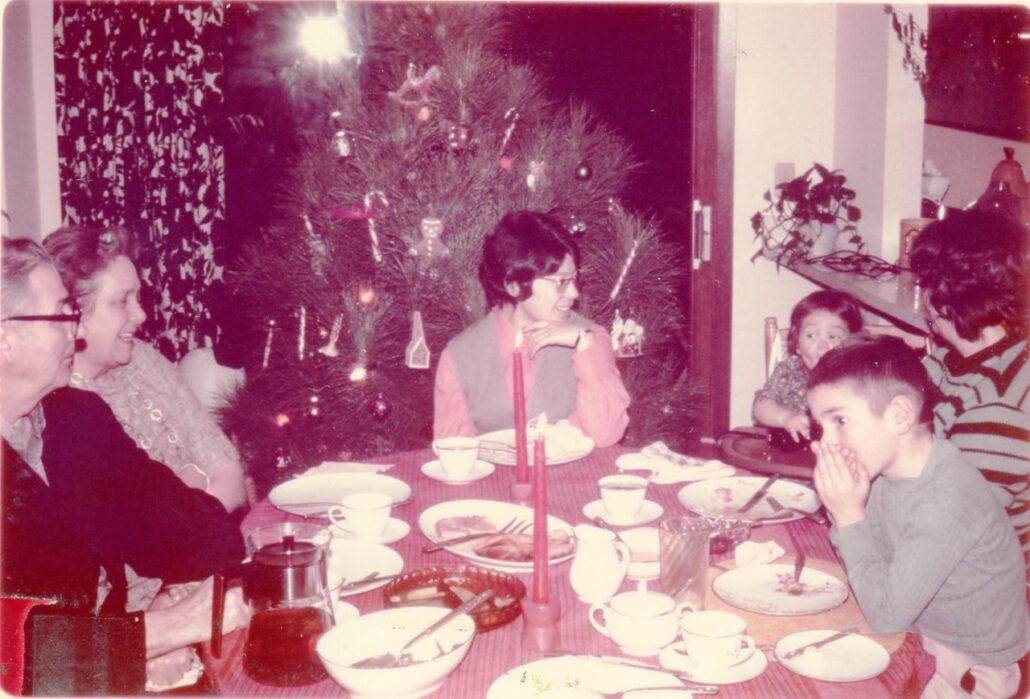 About Christmas 1970 suburban Minneapolis.  My parents, Maria, Joni, Diane and Tom. Maria Eichperger was later Joni and Lauri’s Montessori teacher.  Also at the dinner were my siblings. 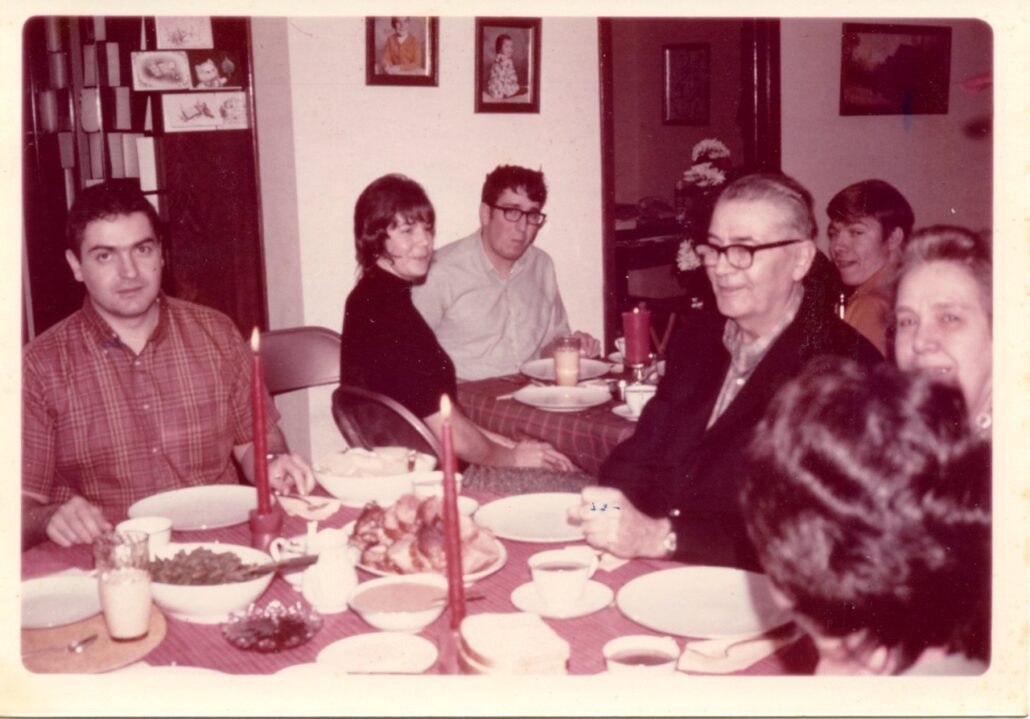 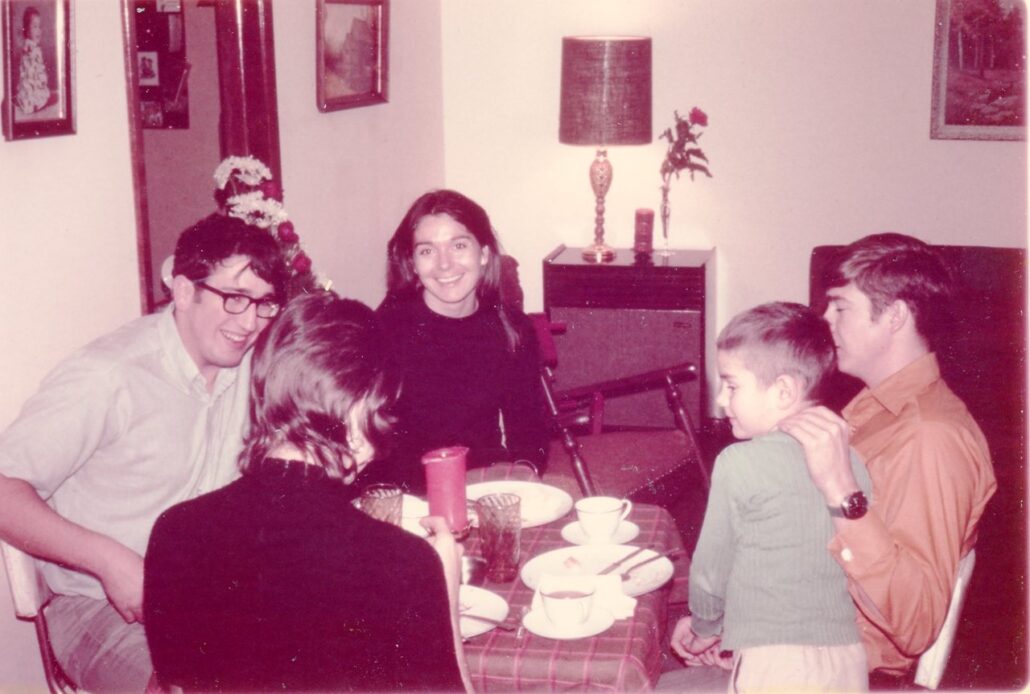 University Hospital stood out in 1965.  The surrounding area is still recognizable but barely.  Back then, it was possible to park near the hospital entrance – no more.

Back in 2015, I went back to this hospital just to look around inside the building I’d first seen in 1965.  It had changed a great deal of course, though the exterior remained the same.  There has been much more change in the last 7 years. The surrounding area I saw in 1965 is still recognizable but barely.

In the entrance area to today’s facility, which used to be the lounge area for hospital visitors, I saw a couple of signs about the history of U Hospital, now part of the large M-Health complex in Minnesota.  Here are the pictures, which speak for themselves. 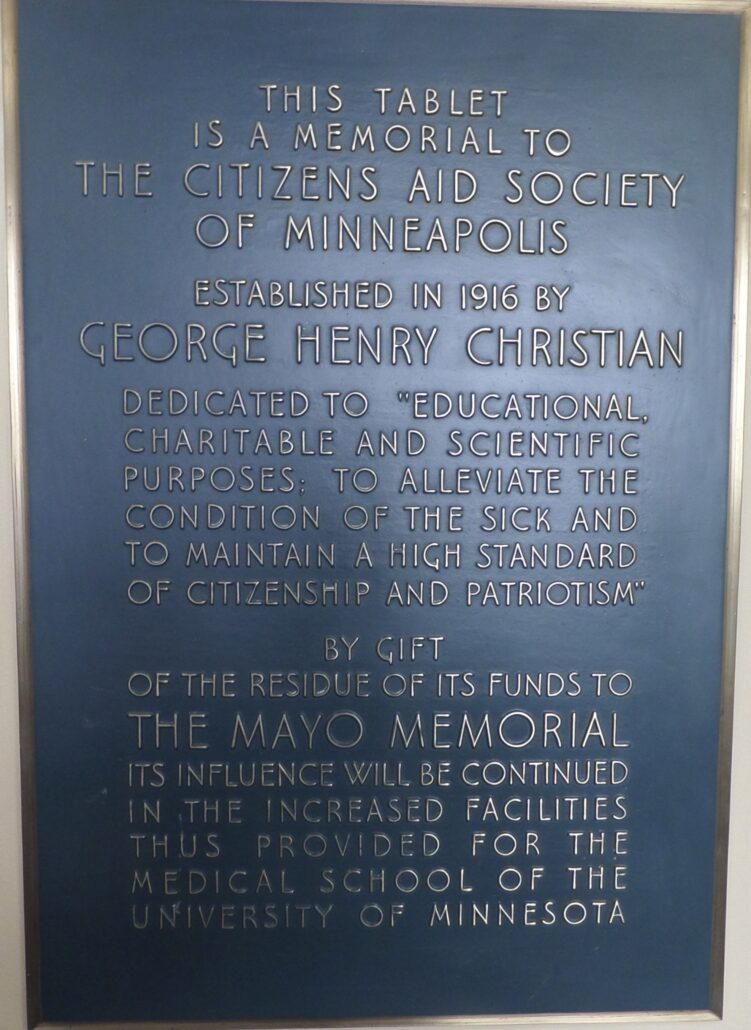 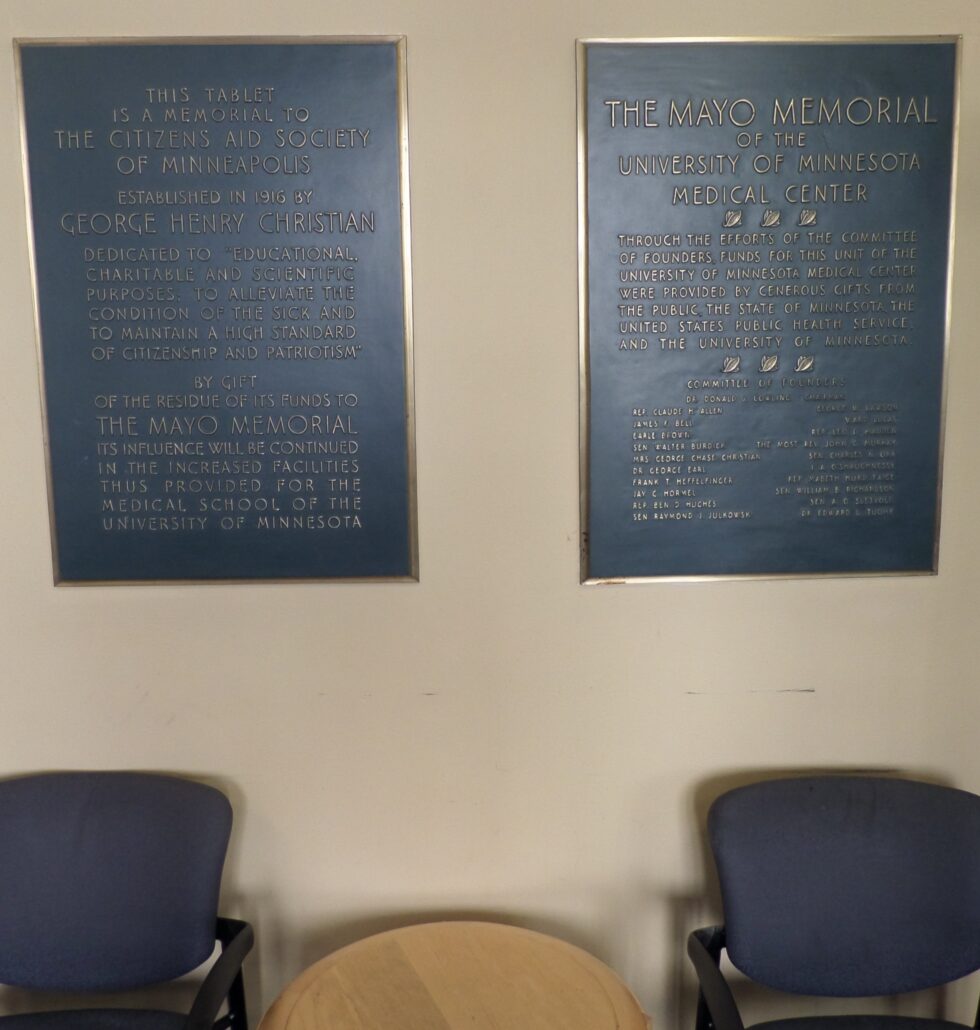 Now it’s my turn.  There’ll be a Caring Bridge portal for me which will initiate after February 17, or whenever the surgery is actually done.

An early Happy Valentine’s Day wherever you are. 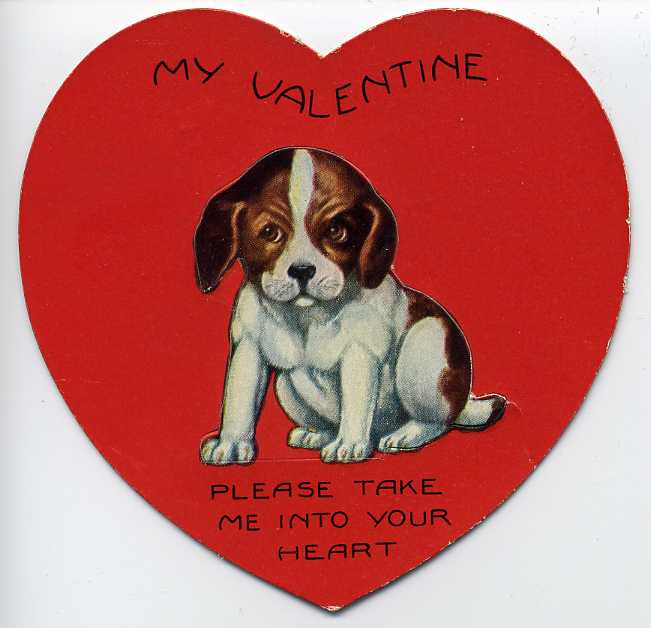 And as a gift: “Yesterday” as performed by the Beatle’s in 1965.    A couple of months ago we watched the three-part “Get Back” film about the last Beatle’s concert in 1969.  I blogged about it then.  If you have even the slightest interest in the Beatles the film is very much worth your time.  Disney Channel.  As it happens, the Beatle’s performed in Bloomington MN August 21, 1965.  At the time I was back in the Cities after my wife had died, and was working at the old Lincoln Del in St. Louis Park.  Survival was the main theme of my life at that time, so I have no recollection of the Beatle’s being almost in the neighborhood that night at the old Met Stadium in Bloomington.

PS: If you’re interested, my Caring Bridge page will be Dick Bernard-mn.  I don’t expect any content to be placed there until Feb. 17.  Many thanks to daughter, Joni, for setting it up. 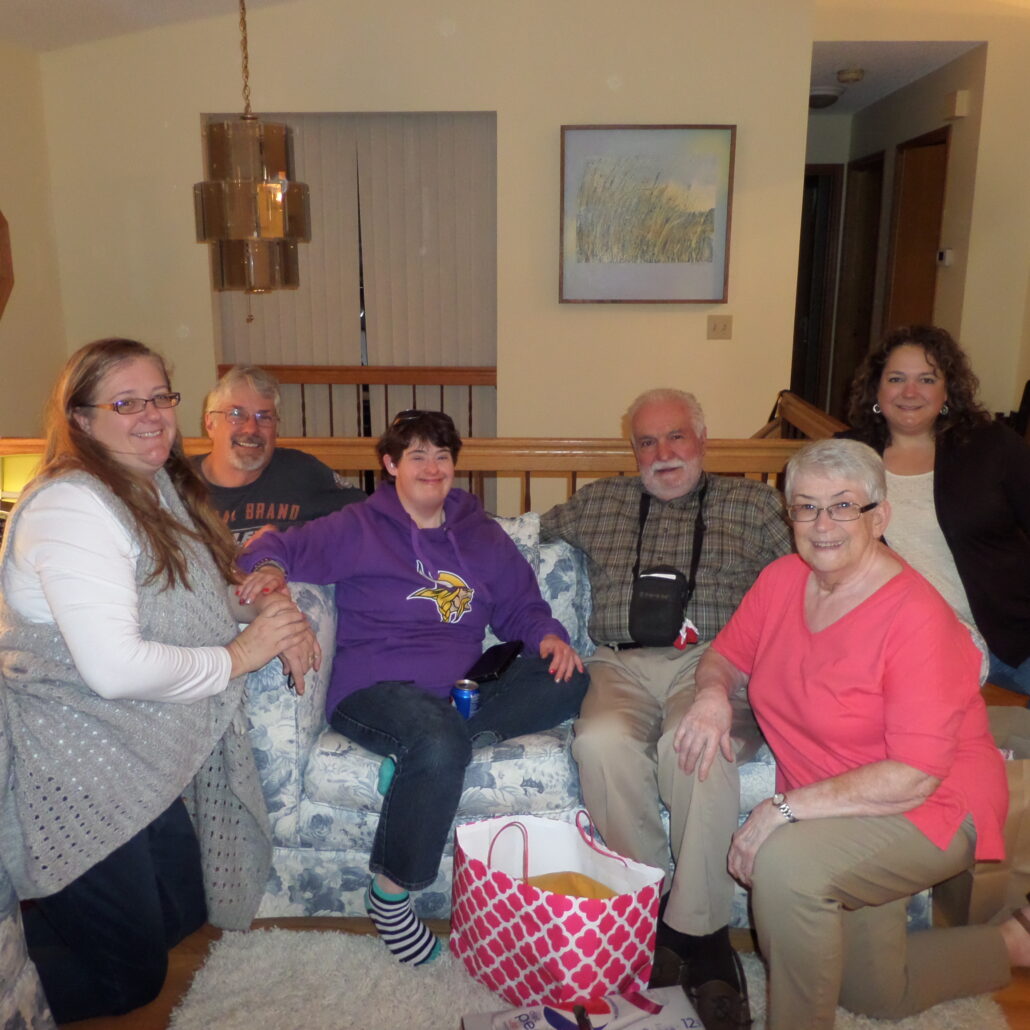 POSTNOTE: To my friend Norm, who sent “Best wishes, Dick, during your undercover review of the health care system“:  Norm,  I’m very impressed with the system I’m experiencing.

Nothing is ever perfect, of course, since there are very many moving parts when a major surgery is undertaken, and of course, nothing can be guaranteed.  There is meaning to the phrase “the practice of medicine” or practice of anything else, for that matter….

The upcoming procedure is the second major one I have personally encountered.  I think I’ve been very fortunate.  The first was Dec. 4, 2018: aortic valve replacement.  During the time period between then and now have been two major events.  The first is the Covid-19 Pandemic which began in early 2020, and has no predictable end date at this writing.  It has been a major disruption in ordinary medical practice.

The second is the continuing consolidation of medical facilities and medicine, generally, which is good and essential in many ways, but a problem in others.  Integrating systems is a long-term process; integrating large systems is not for the impatient or faint of heart.  M-Health, which I knew as Fairview has been my medical provider system for over 30 years.  When I first was a patient, it was primarily a couple of hospitals and a few more clinics.  Today it is a consolidation of hospitals systems and a large number of clinics in a metro area of nearly 3.5 million people.  What used to be a paper based record keeping system is now 100% technology driven, which presents its own set of problems.

So, is it perfect?  Absolutely not.  Is it better than it was when my 22-year old wife waited near two months for a never-to-be-realized kidney transplant at U Hospital in 1965?  Quantum leaps better.  My prospects for success are far, far greater than they were for Barbara in 1965….  And her prospects were quantum leaps better for a patient similarly situated 50 years before 1965 – ironically about the time U Hospital began in 1916.

from Vinnie: My prayers and very best wishes for a successful surgery on the 17th. Thinking of you.

from Maria: Thank you for signaling the ‘Bending the Arc’ documentary. I watched it with great interest and emotion, remembering our 2006 visit to Cange with Fondoze’. I have the Feb. 17 marked on my calendar and will be thinking of you sending waves of good wishes.

from Mary: You will do well-and of course be even more imminently able to write the next chapter of “life from the other side of the hospital bed rails”.

from Laura: You know I will have many prayers for you and of course I will check the CaringBridge.  And thank you for the Valentine. Happy Valentine’s Day to you, my friend!

from Harry: Many thanks for this email, Dick. It reminds me of the saying: “The perfect is the enemy of the good.”

from Beth: Dick, I’ll light a candle for you on the 17th.  Peace be with you, all will be well.

from Gail: Thanks for the info, Dick.  You’re much loved!  Everyone hopes things will go smoothly and you’ll be able to join us again post haste!

from Annelee: You’re much in my thoughts and prayers. I am so happy to hear that you are feeling well. Like you say, life is a journey filled with hills and valleys that we have to endure and master. With Cathy and your family beside you, and your friends being as near as we can be, with our best wishes and prayers, we  also be therein thoughts and prayers for guidance for your surgeon on the 17th, love Annelee,

from Catherine: My thoughts are with you, old friend

from Rebecca: By “big event” I guess you mean colon surgery to remove the cancer. I will be keeping you in my thoughts and prayers (even secular humanists pray–or at least I do). I will be looking forward to hearing from you whenever you are ready to get back to your blog. Best to you and your family.

from Virgil: I wish you the best. I will keep up with whatever information there is. See you on the other side of recuperation.