Back in January a mysterious e-mail appeared in my in-box from someone named Cynthia. She had googled the name Lois Phillips Hudson to see if anything would come up, and found me. More on Mrs. Hudson’s book, “Unrestorable Habitat“, “below the fold”…
(click to enlarge photos) 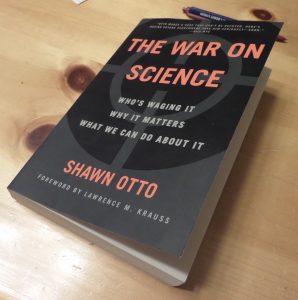 A few months later came an invitation to hear Shawn Lawrence Otto read from his new book, “The War On Science“.
I know of Shawn’s past work, always first rate, and I bought the book, and it made my summer vacation book list.
I read, and learned a great deal from, both books.
They are, on the one hand, very different; but on the other, very similar. One is by an old lady written when she was my age range. Mrs. Hudson, is a retired college professor, quite obviously grieving the loss of her daughter to illness. She writes about the deep conflict she sees between today’s natural world and technology, compared with her youthful days in the midst of the worst of the Great Depression and World War II which followed.
(The retired college professor died before she finished her book, so one has to speculate on what her ending would be, but that actually contributes to the richness of her passionate expression of feelings on her past and present, and our future.)
The other book is by an author who painstakingly and expertly documents not only the very real “war on science”, but on other areas susceptible to manipulation of public opinion. Shawn Otto expertly reviews the problem, and then devotes much of the meat of the book to ways towards solutions.
SHAWN OTTO’S “THE WAR ON SCIENCE”
I highly recommend “The War on Science” to anyone with even a tiny bit of interest in topics like science, marketing, politics, and the incessant manipulation of personal and public opinion (propaganda) in our own country. Get to know the name “Edward Bernays”…. He enters the story by name at page 257.
You don’t need to be a scientist to understand the book, which is a very interesting history of science and its not always consistent position of esteem in our society (thus “war”); in addition, The War on Science is an equally interesting history of propaganda as it has been used in America especially related to marketing of products and ideas going back as far as WWI.
There is so much interesting and well argued information in the book that I would do a disservice by simply doing a once over in a review.
You need to read the book.
Best to take a look yourself. There are many formal reviews of the book at Amazon.com. One of them is mine.
You will see the book is being very well received.
Personally, I found “The War On Science” to be unusual in a couple of respects:
1. It nicks most everyone, including scientists, who get complacent and think they have found and can sit righteously on their own truth, as they define the term “Truth”. The book is heavily footnoted: 59 pages of sources.
2. Most importantly, fully 87 pages of the book discuss ideas for how individuals and groups in our society can move toward solutions to what seem intractable problems.
The War On Science is an excellent basis for book club discussion, as is Lois Phillips Hudson’s Unrestorable Habitat (following). Give both a serious look. 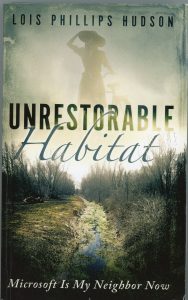 LOIS PHILLIPS HUDSON AND UNRESTORABLE HABITAT (continued)
A few days ago I was at a nearby park, completing “The War on Science“.
This day my phone rang, and on the line was long-time friend Nancy, from Hibbing, calling to comment on Unrestorable Habitat which I had sent her some months earlier and she had set aside and was just getting around to reading.
She had set it aside, but was finding it to be a marvelous book, a strong compliment coming from a retired teacher of English.
Unrestorable Habitat is one elderly woman’s reflections about her life, a certain huge business in her hometown of Redmond WA, some local fish, the loss of ability to imagine, and really, about all of us, everywhere in the so-called “developed world”.
Hudson’s book centers on an issue much on her mind as she grew older: the conflict she saw between salmon and big business in her town with lots of looks back at remembered pieces of richness flowing from her own very real hardships as a farm daughter during the worst of the Great Depression in North Dakota, then in Washington state, and forward into WWII in Washington. (She graduated from Redmond WA high school in 1945.)
Hudson died before she completed her book, but there is far more than sufficient “meat on the bones” to be published exactly as left by her: her opinions about post-9-11-01 contemporary U.S. society.
*
Some years back, I had blogged several times about aspects of Hudson’s 1962 well known book, “Bones of Plenty“, written about the worst of the Great Depression in rural North Dakota, and that is what Cynthia Anthony found in her random internet search. Cynthia, this mystery lady from New York, had become archivist for Mrs. Hudson’s papers, and asked permission to link my posts, “numbers 490, 495, and 565, which reference Lois Phillips Hudson” to her Lois Phillips Hudson Project, a website dedicated to preserving Ms Hudson’s rich but now basically unknown legacy.
It was Nancy who had earlier called my attention to “Bones of Plenty“; and now I was the one who had called Nancy’s attention to “Unrestorable Habitat“.
(Nancy had Mrs. Hudson as a teacher at North Dakota State University 50 years ago, and had vivid memories of her. She was a great teacher, Nancy said. She mentioned one quote by Hudson – at page 24 – that particularly caught her attention: “As..the mother of two daughters and the daughter of a father who frequently assured me that the brightest woman could never be as bright as your average man….” Unrestorable Habitat is peppered with such reflections.)
Once into Unrestorable Habitat, she found the book very interesting and thought-provoking.
Unrestorable Habitat so caught my attention that I purchased and distributed 100 copies, starting about 100 days ago.
Nancy was one of the recipients.
Here is the letter I enclosed with each book: Unrestorable Habitat
*
Let me leave it at that. “Unrestorable Habitat” is worth your time, as is “The War On Science“. Each can encourage you to “Do Something”.
The two books complement each other.
I hope you “take the bait”. 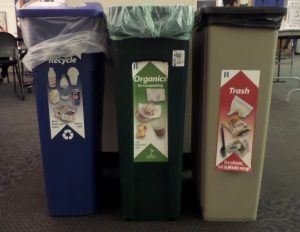 POSTNOTE:
1. Some readers might say, about “The War on Science“, that I don’t know enough about science to learn.
Not at all true. In my own review of the book (it’s probably the 22nd or so, link above) I acknowledge that I had virtually no science education in the tiny schools I attended growing up. My opportunities to know science were basically ad hoc, like watching Sputnik blink in the North Dakota night sky in 1957, or getting the Salk Vaccine not too long before. “The War On Science” is more than just a primer, but written to an audience who knows nothing about science. It is a learning tool in itself.
2. In the solutions section of “The War on Science“, Shawn Otto has a section entitled “Battle Plan 1: Do Something” (p. 371).
In her own way, Mrs. Hudson in Unrestorable Habitat was (I think) trying to begin a conversation: where can or should the new ways fit with the old, and complement, rather than compete with, each other? She wrote at least some of her draft on a laptop in a coffee shop, so what some might perceive as a rant against technology, at least part of her text was simplified because of the very technology she railed against.
There is room for conversation. She was Doing Something.
Earlier today I was at Mass at Basilica of St. Mary, and afterwards noted again the three trash containers downstairs (photo above).
This experiment goes back a couple of years, when my friend Donna and her committee got a small grant to get recyclable containers for use in the coffee area. They were Doing Something.
The experiment has never worked as it was supposed to. If one looks in the bins, there are admixtures of items, despite the verbiage on the containers. One can say it failed.
But I don’t agree. Who knows, among the hundreds of us who visit that area each Sunday, there is someone who gets an idea for use back home, maybe if only in their own home? Great ideas start with experiments that seem to fail. But to start them, someone has to “Do Something”.