Voter Registration Rules by State: here. Very useful handy guide. Share.
An appeal for a more civil political conversation from the Benedictines in Duluth MN: here. Special thanks to Molly. 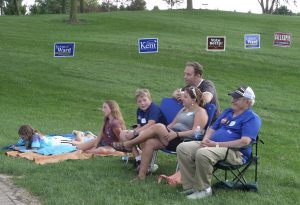 Monday’s celebration of Minnesota former Gov. Wendy Anderson‘s life was both uplifting and emotional – I attended…and I’m a person who met him only twice, and then briefly, well into the late autumn of his life. (My personal comments on the Memorial are here.)
His greatest days in the Minnesota legislature were in the early 1970s, when “people disagreed and worked together anyway” in the words of one of the speakers. This was a time when the adversaries staked out their positions, but often actually liked and respected each other, and figured out a way to negotiate to resolution of issues, even if, as Governor Mark Dayton marvelled, it took a near half year Special Session, back then, to get to “yes”.
Todays epidemic of the politics of personal destruction of the enemy other existed, I’m sure, but the combat then was child’s play compared to now.
*
But I noticed something else, Monday, since immediately after the Memorial Service, I left to go to a DFL Senate District 53 event (my home District).
By and large the crowd in the Church was of my demographic, “old white guys”, who had been through the political wars together. You probably couldn’t tell friend from adversary there: lots of handshaking, reminiscing…. Most well-dressed for the occasion, some UofM or Hillcrest neighborhood hockey alums, wearing the jersey for one of their own.
The pews were filled with the face of 1970s Minnesota, when politics was largely for successful white men who had the time and the resources to do public service. One of these, long deceased, was my best political friend: Gov. Elmer L. Andersen, a lifelong conservative, a wealthy businessman, but one who was an amazingly progressive man, largely due to having been orphaned at an early age.
He understood hardship from the ground up, and the need for civilly working together.
But my guess is that it was the rare female or ethnic minority face making government policy those long ago years. As Governor Dayton said in his remarks, among his other assets, Wendell Anderson, very proud of his Swedish ancestry, had “son” as the last three letters of his name – very, very helpful in a state like ours.
*
Back in Woodbury, there was a new “face” I saw at the DFL Senate District 53 picnic.
I took snapshots as I usually do, and two of these catch the general lay of the land better than the others (below, and leading this post).
(click to enlarge) 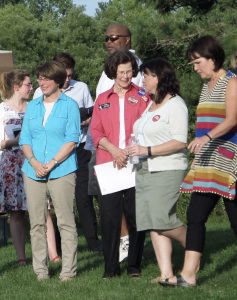 At left is U.S. Senator Amy Klobuchar, (squinting into a very bright sun); next to her, State Rep. JoAnn Ward, completing her second term, with a passion for returning civil discourse to the practice of politics; talking to her, State Senator Susan Kent, completing her first four year term, taking a leadership role on some tough issues at the legislature. Finally, walking in from the right, U.S. Congressperson Betty McCollum, in her 8th term in Congress representing the St. Paul and east suburban area.
At the same event, but not in the photo, was Alberder Gillespie, long time resident and an impressive leader who’s far more than paid her dues, now running for her first time State Representative in the east side of the Senate District.
Some of these candidates have women opponents; some men.
*
There is a very different look to politics these days, in my suburban district, and I’m very glad for that.
There are the young people who attended; and those representing other ethnic groups and religions, leaders among them, who were there. All of these are welcome players in our political conversation.
*
One might understand that some of my cohort (older white men) take exception to the change we are seeing; some struggle against it. Commanders like to stay in command.
But this is a new reality. We won’t be going back to how it was in the “good old days”, where “good old boys” ran the club. Those days have ended. We’re all more and more equally part of the group.
Personally, I am delighted at the true benefit/gift/grace of a more diverse representation in our government at all levels.
We are far from perfection, granted, but as dysfunctional as the process of seeking leaders seems to be at this moment in our history, what is happening now is normal when deep change is genuinely occurring.
We are making significant progress, which I will do everything I can to help continue.
We all need to get deeply involved.
Now. (Early voting begins in some places within the next month.)
https://thoughtstowardsabetterworld.org/wp-content/uploads/2022/04/thoughts-300x138-1.jpg 0 0 dickbernard https://thoughtstowardsabetterworld.org/wp-content/uploads/2022/04/thoughts-300x138-1.jpg dickbernard2016-08-18 02:45:202016-08-18 02:45:20#1156 – Changing the Political Conversation: Two Remarkable Events.
0 replies