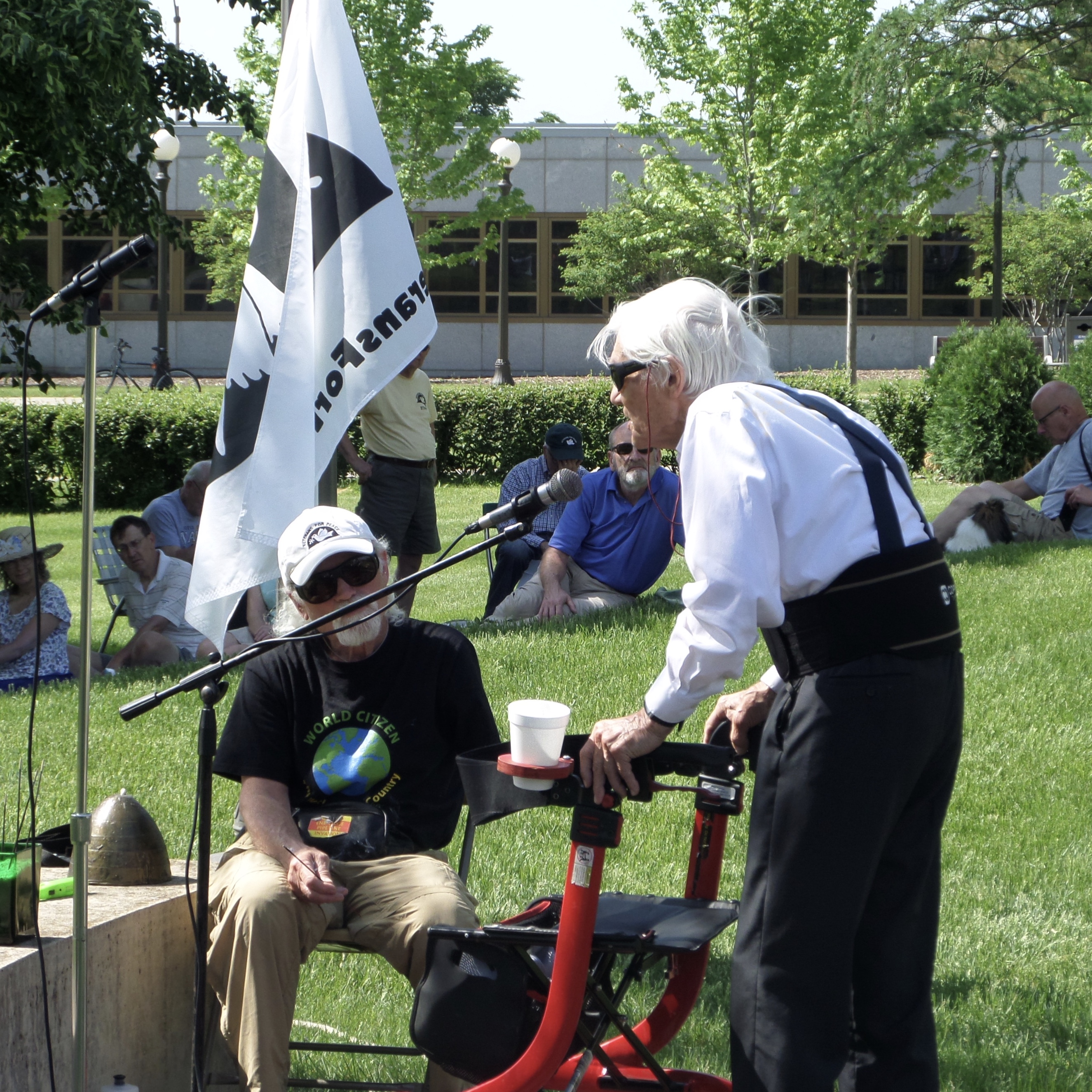 At Minnesota Vets for Peace Memorial Day May 28, 2018, near the Vietnam Memorial on State Capitol Grounds.

Today’s mail brought the first letter from Grandson Spencer, now, about three weeks into U.S. Marine Bootcamp at Camp Pendleton, California.  The contents are between he and I.  It was great to hear from him.  Next letter to him I’ll use the WWI stamps I bought this week.  The sheet headline: WORLD WAR I *TURNING THE TIDE. 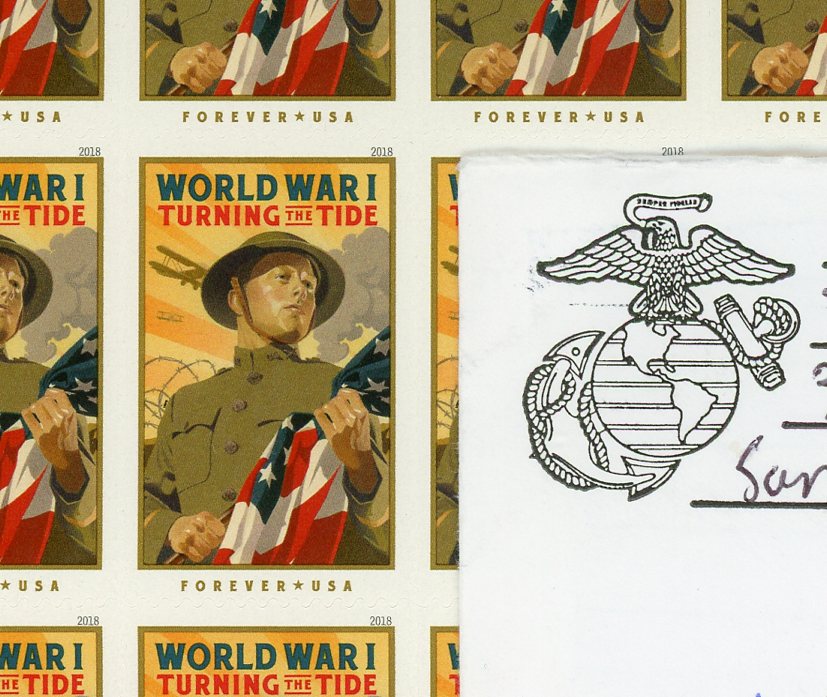 In yesterday’s e-mails came notice of the upcoming national conference of Veterans for Peace in St. Paul.  The dates are August 22-26.  I’m a long time member of Vets for Peace, and I’ll be there.  Here’s the information.

I see no contradiction at all in being very proud of Spencer as he confronts a new reality in boot camp, and being very committed to Vets for Peace, an organization largely of veterans which thinks war is insane.

War seems much more salable than peace, at least as a political point.  Enemies are useful, then deadly.  World War I which ended 100 years ago this year, was to be “The War to End All Wars”, and did nothing but spawn WWII.  The famous Kellogg-Briand Pact of 1928, whose co-author was from St. Paul, apparently penned the draft six miles from where I write, at Cedarhurst,

I don’t pretend to end war with this column, but rather hopefully one or more readers might take an interest in the following, which is, in my opinion, a romantizing of the power of war.

We each have our interests.  One of mine is a fascination with the nuances of history, family and otherwise.  It is so engrained as to be almost genetic.  So, when I found a large book in the abundant junk at the old family farm, I rescued it (cover below). 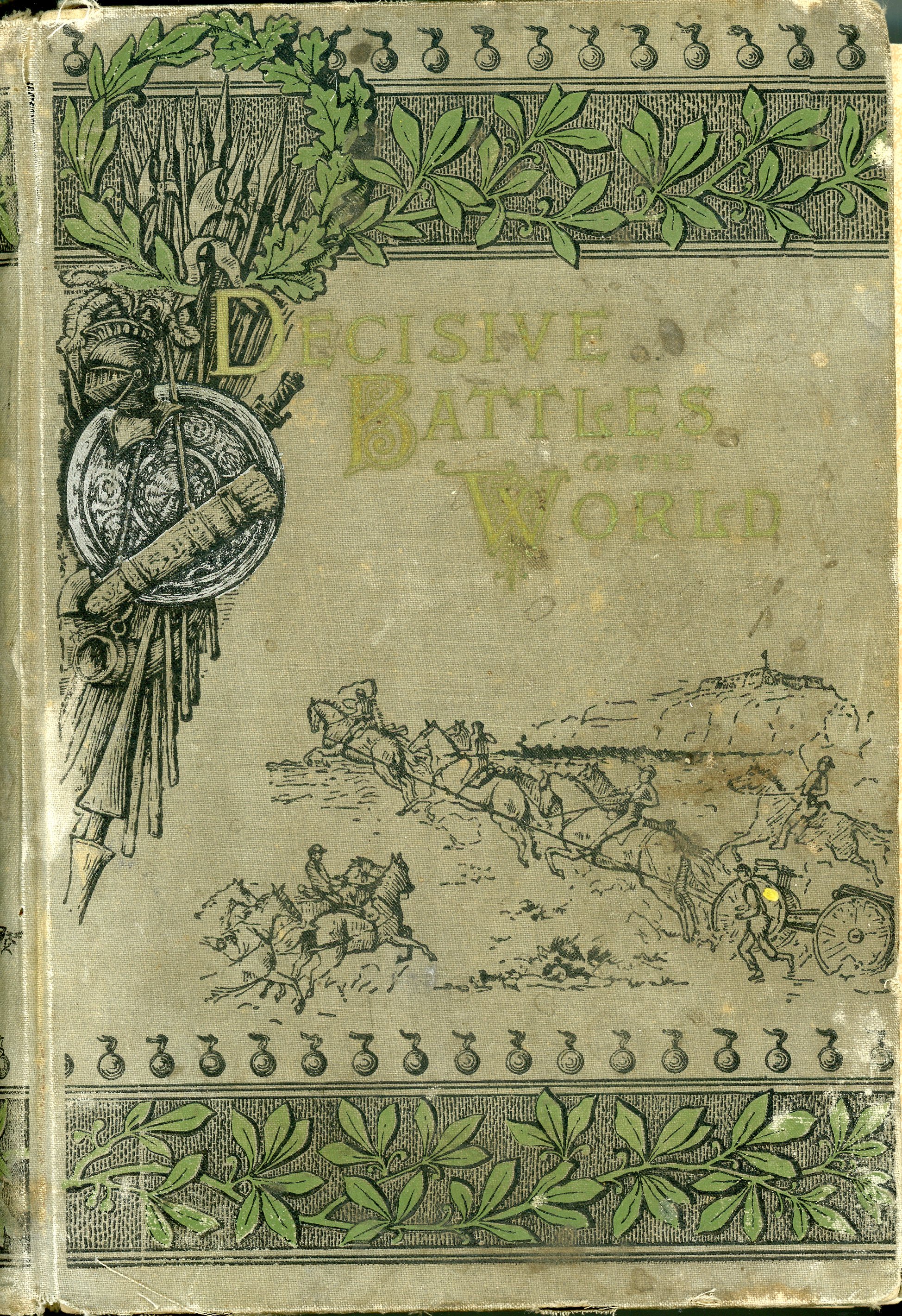 Personally, I feel we are in exceedingly dangerous times in our country, with an incompetent leader who we freely elected, whose allegiance has nothing to do with protecting and defending the Constitution of the United States of America.

We are very vulnerable to attack, and that attack will be by unconventional tactics – unknown to the person who wrote the old book you see pictured above.  We are already under such attack, but we don’t seem to care.  We will pay dearly.

Decisive Battles of the World ends with a Chapter on the battle for Santiago, Cuba, in 1898.  Compared with the other 52 battles described, Santiago wouldn’t rise to world class, but such things are the authors choice.

Succinctly, the 52 battles described are as they would have been at the time they were fought.  The first described was Marathon in 490 B.C.

(Here is the list of battles the author felt were decisive: Decisive Battles001; anyone interested in the actual book can order it here.)

Of course, the deadly 20th Century had not yet begun, with World Wars I and II, and their players in the future.  In those 20th Century wars, the rules of engagement were largely the same as in all the previous engagements, only more advanced technology each time.

Today we are exceedingly vulnerable to technology and its misuse.  We generally seem clueless to this deadly risk, and that we are not in control of it, except by choosing what to believe or not.

I’m proud of Spencer, hanging in there in what will likely be the most taxing three months of his young life.  Hopefully, he will never have to use the skills taught young Marines.

Quite frequently over the years I have found historical references at U.S. government websites, as I found Kellogg-Briand (above).  As noted at this site, history is no longer being maintained by our own government.  I believe this to be a deliberate decision to further bury history, and if so it is a dangerous decision, especially in this internet age, where people less frequently read books.

Decisive Battles had to have been my maternal grandfathers book.  He was born in 1880, and the Spanish-American War began 7 years before he and Grandma married and moved to the prairie of North Dakota in 1905.  How did this book get to the North Dakota farm?  My paternal grandfather was actually in the Spanish-American War, but the two Grandpas would not have met till Mom and Dad married 37 years later.  And I don’t recall Grandpa Bernard as being much of a reader, though he was plenty intelligent.  Who secured the book in the first place, and why, and why they saved it, will have to remain a mystery.

Author Charles King was a very interesting guy with an interesting family pedigree.  His bio says he was a commander at Pagsanjan Falls in the Philippines, and if so, he was there with my grandfather, then a private in Co. C. of the First North Dakota.  At Paete, Co. C lost four men.  I actually visited the Falls in 1994, a close call with history.