POSTNOTE:  I noticed, here, that three of my four statewide candidates won in yesterdays Minnesota Primary election.  There’s much to learn from the results for all candidates.  Now, more or less 80 days to the main event, Nov. 6.  More at the end of this post.

Before yesterday’s Primary I outlined what follows below.  Just some thoughts on political propaganda:

One of several contested DFL seats yesterday was Attorney General (AG).  There were five DFL candidates for AG on the ballot, one of them MN Congressman Keith Ellison.

Election day, a followup in the same newspaper, well hidden on page 5 of the B Section headlined “Alleged Ellison video not released“, with a paragraph nestled in the middle that the person alleging the video would not be posting it for many reasons “including that it’s traumatizing, humiliating and sets an expectation that abuse survivors must prove their stories.”  Full article here:Ellison Aug. 14001.  It’s worth reading.

So it goes in the fetid swamp of political assassination.  Timing is everything.  Make it impossible for the accused to marshal a defense.  Somewhere there is truth, but this assassination attempt was made, with the Star Tribune complicit (it didn’t have to publish the story, much less give it primary front page headline the day before the election….)

Ellison’s experience is the reality every politician, (and every one of us in some way), confronts in this day of instant assessment of guilt.  Any politician with any moxie has to anticipate the most negative bombardment close to election day – “the October surprise”, it is usually called.

We will be bombarded with this kind of stuff from now until Nov. 6, and after.  Why?  Because it works…a sad commentary on us as citizens.

So, we know it’s coming.  The only antidote is to control our impulse to judge at the moment of accusation, anything written particularly by an opponent, or unflattering photos of the other candidate, or whatever else passes for political posturing.  Yes, this is hard.  Negative stuff, like the Ellison allegation, works…because we allow it to work.  In fact, we may even find it funny.  It is not.

There’s lots to say: some personal commentary on propaganda.

In this day of Government by Tweet, propaganda is very simple.  Here’s a good-humored example between friends.

My good friend, Frederick Johnson, mentioned that a review of his most recent book could be found in the latest issue of the well-respected journal Minnesota History.

I subscribe to the journal, but hadn’t seen the review, so when I got home I looked it up.  You can read the full review here: Patriot Hearts001.

Frederick and I are good friends, so after reading the review, I wrote him with my own review of the review:  “I cut into my very busy schedule today to read the review of Patriot Hearts.  My summary, and I quote directly from the review: [your] “judgments seemed a bit off”.  But, so what else is new!?” 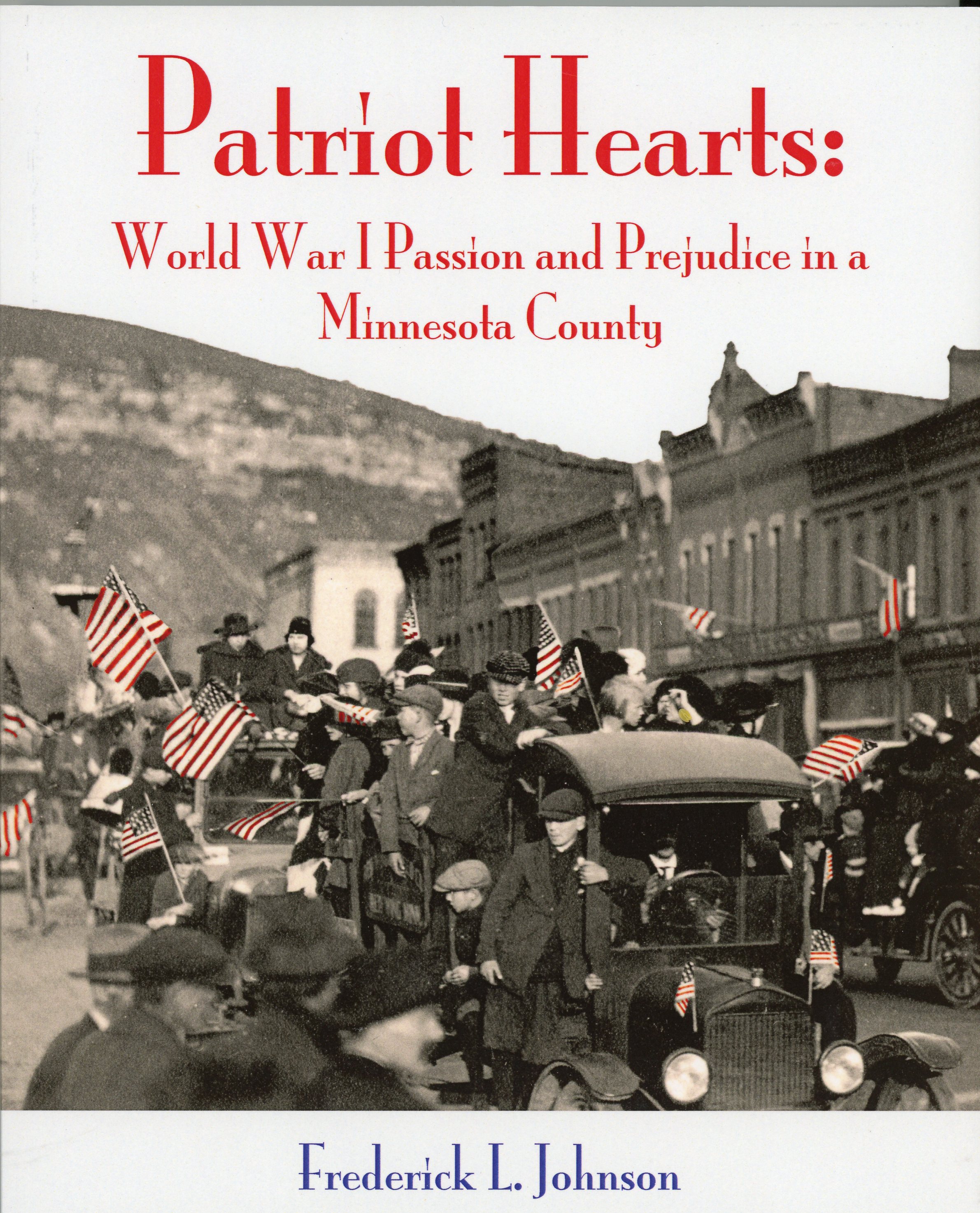 We had a good laugh.  My next sentence was “Of course, I jest.  Great job.”

Patriot Hearts was my book of choice for the annual week at the lake some weeks ago.  I highly recommend it.

But, this is about propaganda.  Yes, the reviewer of Fred’s book indeed had said “judgments seemed a bit off”  on two specifics (you can find this in the last paragraph of the actual review).  But three lines from the bottom, the reviewer concludes that Johnson’s book “Is a brilliant study in how easy it can be to use patriotism as a cover for subverting democracy for private ends.”

What I had done, of course, with my 6-word “review” in jest, was to ‘cherry pick’ the words that seemed to cast the book in the most negative light, when the totality of the review was very positive.

Of course, use or misuse of information has always been a problem.  Frederick, who is a respected historian in Minnesota, had to work with whatever documentary evidence was available.  His book is about 1917, the entrance of the U.S. into WWI, as played out in a single Minnesota County.  If you look through his 347 footnotes, they reference contemporary newspapers and such of the time.  He spent an immense amount of time in research to write his book.  Still, even historians have to go with the data that they have (which is far superior to a headline in a newspaper from two days ago…time gives context, which in Patriot Hearts case is 100 years.)

In this time in history when communication techniques are ever more sophisticated, and everything seems shorthand (Twitter, etc), it is a wonder that politicians are willing to say anything at all.  Anything can be twisted and manipulated by anyone, particularly if the audience is susceptible to the power of suggestion (think of the word “liar” which became a synonym for Hillary Clinton, when Mrs. Clinton was a world-class truth-teller compared to the Current Occupant of the Oval Office.)

Then there’s the matter of photographs.

In the good old days – say 1917 – it was hard work to take photos for publication; and hidden cameras, if they even existed, were very rare and difficult to manage.

Even then, people of note learned some tricks of the trade: if you’re going to have a glass of wine at the reception afterward, note first if there is a camera around, and if so, don’t get caught on film holding the glass.

Nowadays multiple cameras and recording devices can be and probably are everywhere in almost any room, and the owner of the photo or recording can pick and choose from amongst hundreds of possibilities showing the person in the best (or worst) possible light in a pro, or anti-piece.  It is a terrifying time for a public person, any public person.

There is plenty of room for discussion, even with just these examples.

The prudent advice is, I think, to train oneself to avoid depending on sound bites and such (of which Twitter is a main one)  to make judgements about anyone or anything.

Of course, most of us are susceptible to pitches, especially about things which resonate with our own biases, so the problem is a difficult one to control.  But it is something we can all work on.

Extra credit:  Take some time to look up the Creel Committee (Committee on Public Information), and Edward Bernays, who was part of that committee in 1917.  Bernays became one of the geniuses of propaganda (including advertising).  Bernays work helped teach Joseph Goebbels….  We are immersed in propaganda every day.  It has been perfected here in our own country.

In my previous post on the Primary Election, I listed all recognized candidates except one, Matt Pelikan, DFL endorsed for Attorney General.  There was a simple reason.  I had no context at all with him.  Nobody had said anything to me about him.

Sunday before the Primary, at a DFL Senior Caucus picnic, Matt Pelikan stopped by and talked with us for a few minutes.  His photo is below.  He is a young man and he is worth getting to know for the future.  Here’s his story.  Another young person who’s showing up, on the court.  Impressive. 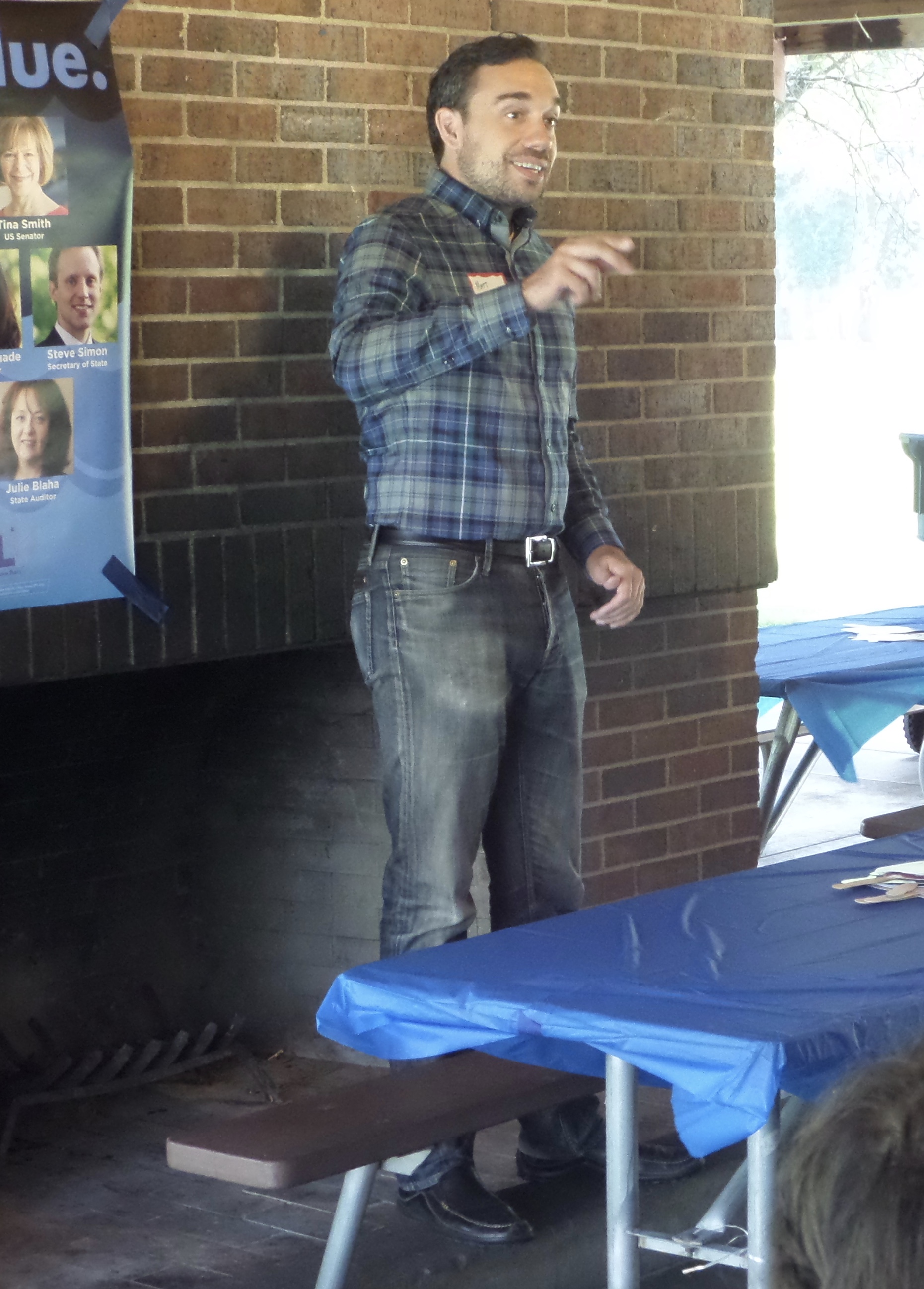 from Carol:  I disagree with your assessment of the article re Ellison.  Should papers not print something because it’s right before an election??  Then they would REALLY get accused of bias.  I’m pretty sure if Trump were accused of some horrendous deed right before the next election, we’d all want that printed…

It didn’t seem to hurt Ellison too much – since he handily won, anyhow.  Without the ton of early voters, it may have had more impact.
You DO know that this is the second woman to publicly accuse him of abuse, right?  The first was several years ago, while he was still married and she claims they had an affair.  Both the parties tried to get restraining orders on the other…
When things start piling up, then it looks more credible.  Plus, the woman’s son is the one who posted these allegations – against her wishes, apparently.
I just keep thinking of Obama, who in 8 years in office never had a whiff of sexual scandal (either present or past).  And, for that matter, neither did George W.
from Jane:  Interesting. Our History Alive show in Lanesboro the last two weekends of September is on 1918 and touches on the Commission on Public Safety and prejudice against Norwegians as a result.
from Lydia: Terrific column, Dick–& MUCH needed. Your simple & direct suggestions for how every one of us can engage in “internal” resistance to propaganda, snap judgements based on bias etc is VITAL for today’s world(especially during election seasons). Thanks! (I’ll be sharing your column)
https://thoughtstowardsabetterworld.org/wp-content/uploads/2022/04/thoughts-300x138-1.jpg 0 0 dickbernard https://thoughtstowardsabetterworld.org/wp-content/uploads/2022/04/thoughts-300x138-1.jpg dickbernard2018-08-15 17:01:102018-08-16 18:35:00Propaganda
0 replies

War and Peace After the Primary….
Scroll to top