PRENOTE: My personal views on this issue are at the end of the post.  See “Personal View”.

Previous posts this week, here and here.  There will be a few on other topics in coming days.  Check back. 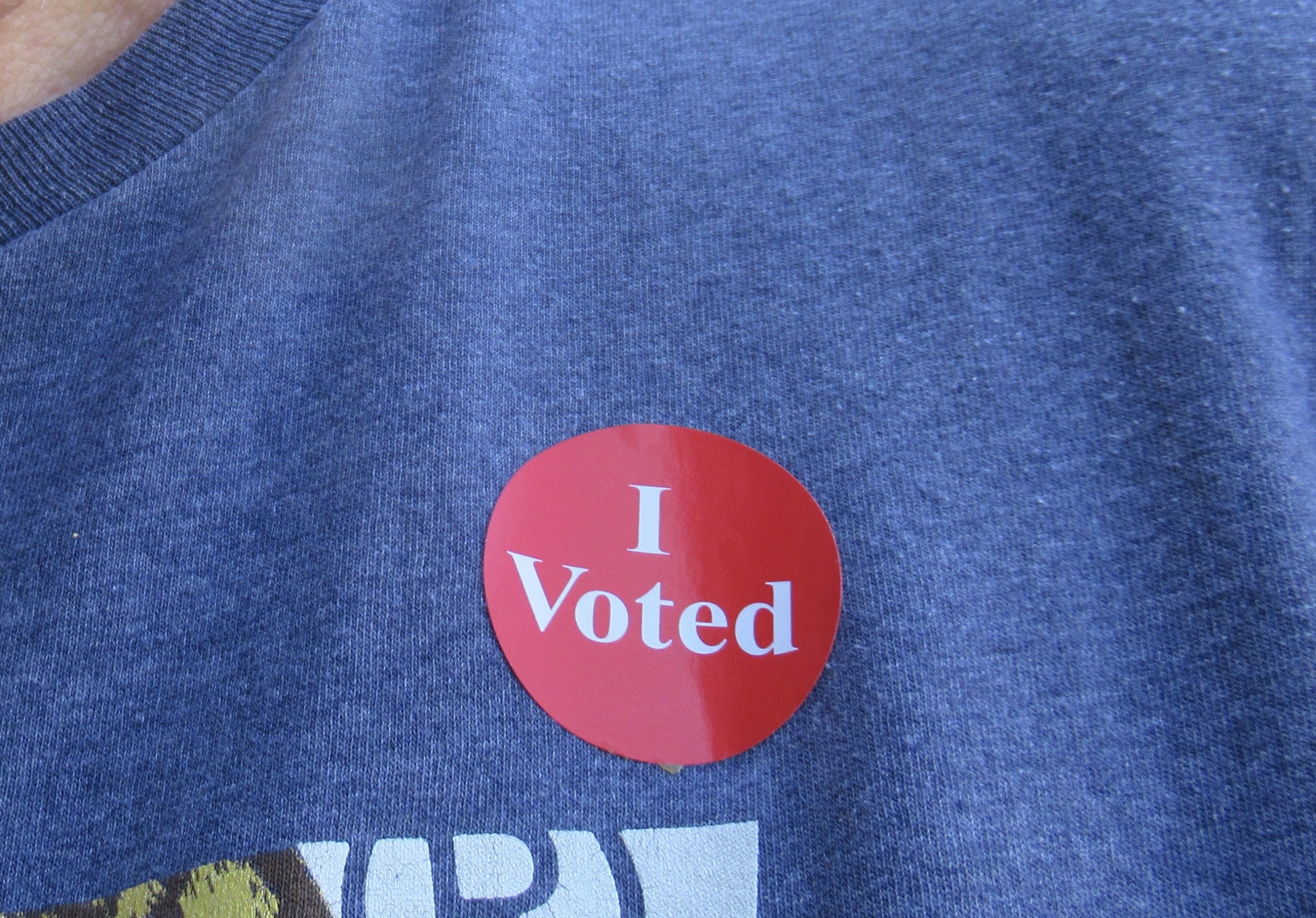 Tuesday Aug 9, 2022, was Minnesota’s Primary Election.  I voted at about 7:30 a.m. and I was very impressed with the general organization and tenor at the site.

I always vote, in every election.  I’m accustomed to a positive experience, without exception, in past elections.

I wore my “I Voted” sticker all day and it was noticed, positively, several times.

Later that morning, I had coffee with a friend who had not yet voted in her community.  I asked if she would comment back on her reactions .  She didn’t know my impressions.  Later in the afternoon came her e-mail:

“All the poll workers greeted me.  I was surprised to be asked to read and sign an acknowledgement that I was not a felon, or something like that — I wish I could remember what it said.  I don’t remember that from years past.
I voted and thanked everyone for working the polls.  It was a very cordial atmosphere.  I put my red “I Voted” sticker on my car’s visor.  It is always in the down position so is visible when anyone looks at my car!”
I, too, had noted the “acknowledgment” form: “The acknowledgement is, I suppose, directed to the ’stop the steal’ folks.  A waste of paper, but I understand it.”
For this particular election and this post I decided to focus on the single non-candidate issue on the ballot: a major school referendum in my school district.  (In the Minnesota primary, the ballot is partisan – you can only vote the column for your party preferences.  The school election was separate, non-partisan, and open to all voters.)
FACTS:
According to the school district website: “The population of the district is approximately 98,100 people, including the more than 18,400 students who attend district schools.”  There are three high schools.  There  is an unknown number of home and parochial school population in the district.
Here are the results of the Referendum , linked in the school district report post-election:
70, 429  was the potential # of Eligible Voters (100%)
7,782  Voted Yes
14,834  Voted N0
47,813  did not Vote (68%)
What this means is very significant, about “we, the people”.
Of most concern to me, but typical of past non-presidential-year elections, was the low voter turnout.  Minnesota is very friendly to voters and voting.  There are few impediments to voting.  August 9 in my town was a perfect weather day.
But unless you voted, you have no say in outcomes.
There is little for winners to celebrate.  Those who won got about 20% of the eligible votes.  Two-thirds of those eligible to vote didn’t vote at all.  Where were they?
The need articulated by the proposal doesn’t end on August 9.  The costs will increase when the same changes come up again.
*
Below is essentially the only communication about this issue on the street or in my mailbox before I voted.  There were a few “Vote Yes” signs, but they were few in comparison.  School districts as public entities aren’t supposed to campaign for the issue, even though it would make sense that our public officials who made the decision for referendum could speak out publicly in favor of it. 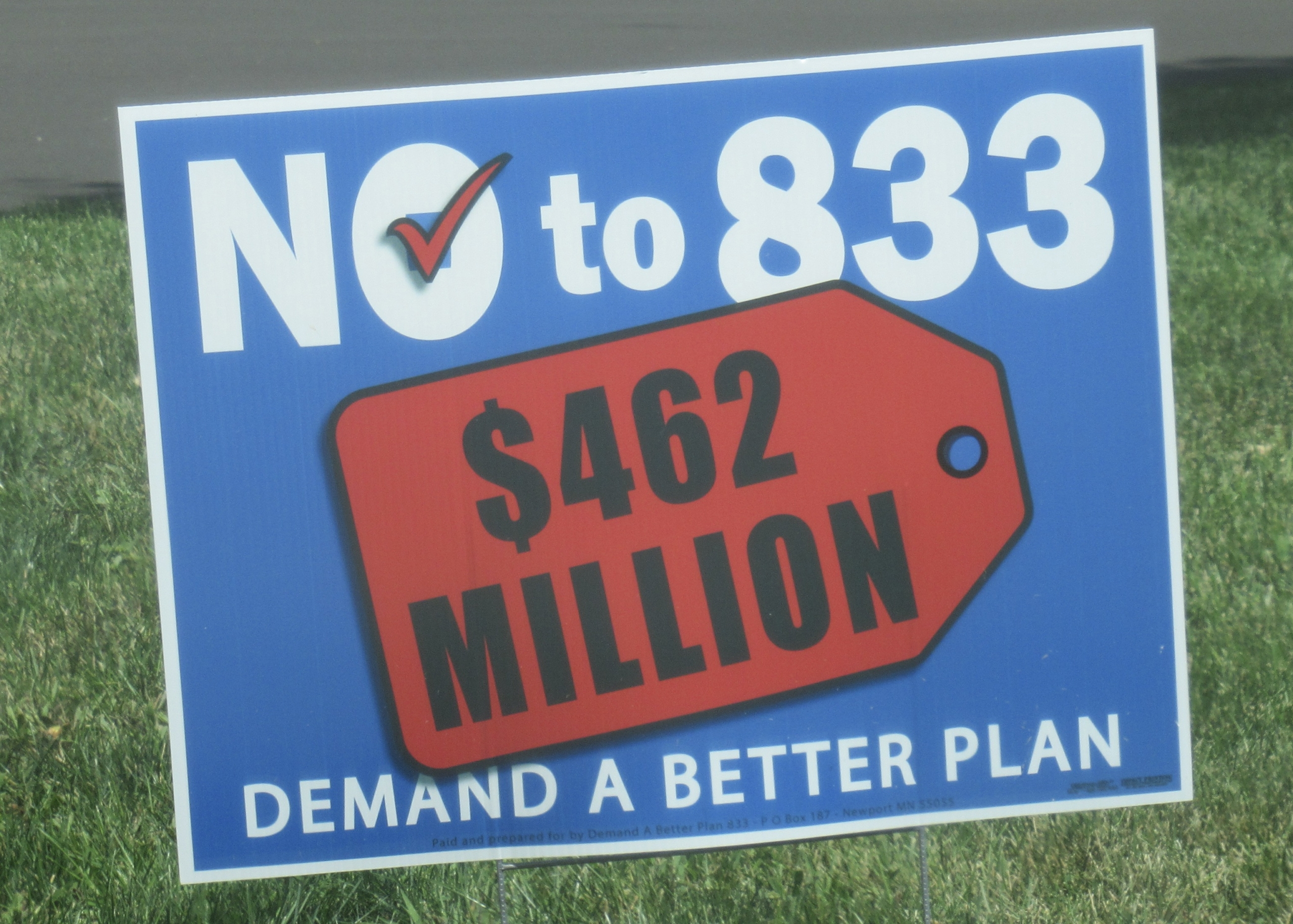 For several months, the School District had a complete description of the issue on its website, and on request I received a 4-page pamphlet describing the issue.  I had earlier publicized it to this list, and it is here: 833 Referendum 2022.  I had no reason to ask more questions, though I’m sure I could have.
This was the extent of the public information citizens had about this important election.
A “Vote No” mailer opposing the referendum came to us by mail at 6 p.m., August 9, 10 hours after I had voted.  Here it is: ISD833 referendum mailer 2022.  I doubt it would change many minds.  Demands, particularly without even suggested solutions, and being against, are not very positive techniques.
Elections do have future consequences.  Vote well informed.

POSTNOTE: For those with an interest, here is the data of all MN Primary Election results August 9, 2022:

PERSONAL VIEW: The referendum issue has been public information since  February, 2022.  On April 21, 2022, the School Board, in a 6-1 vote, approved the plan, which went to vote on August 9, 2022.  There was very public information at every step in the process.

As noted above, the community rejected the proposal, mostly, I believe, by not even bothering to vote when the opportunity was available.

There is the famous saying, made famous by Pogo, “We have met the enemy, and they are us.”

It is easiest to look for culprits, who are never, it seems, ourselves.

The biggest dilemma of democracy is its greatest gift: the right of people to vote.

The anti-referendum folks really did not win anything at all; everybody lost.

The school district is under strict rules when it comes to school elections: it can release the facts, but it cannot take sides.  It followed its rules in this case, with a great plenty of sunlight.

The anti- forces were not under such constraints.  All they had to say in their own networks was “vote no”.

The issue was non-partisan, so it was off-limits to use party designation on campaigning.

Personally, I voted yes, and I requested, received,  and then sent the four page leaflet prepared by the School District to people with an interest in the issue.  Personally, I didn’t know the full details:  that is what elected representatives are for.  All but one (6-1) approved the plan that went to vote on August 9.

Schools will open on schedule in a couple of weeks.  None of the plans voted on were immediate – they were for future needs.

The issue will doubtless come up again.  Who knows what kind of strategizing will happen for next time?

No matter, the issue remains and the beneficiaries or the victims of whatever happens will be the nearly one of five residents of District 833 who are too young to vote.

Thank you to the 833 School Board, and school district staff, who represent their interests.

Coincident with, but totally separate from the instant issue, came a most interesting lengthy article on the battle about public education generally.  For those interested, from Henry Giroux, here.

Molly, who sent the article, sent this note with it:

Hi Friends, This article is about American education K-12, and about the growing movements towards censorship of content, and of elimination of “how to” methods like teaching critical thinking skills.

The article—be warned–is a bit long—ie, needs a better edit job—but is an important, well-documented one (has a ton of references), & I think is worth it.

It scares the socks off of me. That’s partly because I was very very lucky, back in the Stone Age, to have a 2-year English class in high school that very deliberately taught critical thinking skills in our reading & writing…

It  has  been more and more evident to me that these skills are
increasingly lacking in US society, but I did not realize that they
are being consciously omitted/suppressed  in some educational systems…

from Carol: Sorry, but I’m going to disagree with you a bit on this one.  We voted early in-person.  It wasn’t until I downloaded the sample ballot that I actually focused that there was a school referendum.  (Sorry – like everyone, we’ve been a bit busy, not the least of which was battling Covid recently.)  Down in our corner of Woodbury, there were many lawn signs saying vote “No.”  I believed that was due to the district’s threat of closing Newport Elementary.  Now, I don’t know for sure if that is tied to this vote, but people here are not happy with the school district.  I’ve had friends who sent their kids to Newport, and they praised the school highly (one of them being very persnickety about where her kids got their education).

Also, in the past (altho’ you say the school district itself can’t campaign in these situations), I believe that we got mailings and phone calls from SOMEbody, encouraging us to vote “Yes” on a referendum.  This time, crickets.  The wording on the ballot was pretty generic.  I was one of those who voted – but skipped voting on the referendum, as I felt I definitely needed more information.  Now, that’s probably my own fault; on the other hand, we’re pretty aware of what’s going on, and we for sure support education.  So I’m guessing a lot of those who aren’t plugged into the system through their children felt a little blindsided as well.  That “ask” was for a lot of money.  They’ll regroup, and try again.
Response from Dick:  Many thanks for the comment. I hope the Covid has passed by.  There are things we all need to learn from this experience.  I personally started to pay attention to this when I saw the first Vote No signs going up, and, yes, they seemed more common in Newport (I drove over there specifically to see if this was true).   Without those Vote No signs, I would have been less likely to pay attention, though, as you know, at the polling place they called attention to the school district issue on the back.
I don’t follow this all that closely, normally.  In past years I do know that on some occasions there were Citizens Committees, unconnected with the official school network, that did get out the vote (probably similar to the Vote No bunch this time.  I do think that school districts, and perhaps other public entities, are constrained from ‘blowing their own horn’ in advocating for their own issues.  I’m not positive of that, but this election has caused me to look into that aspect further.
There certainly was no lack of easily available information in a timely manner – but one had to seek it out, and ask questions if need be.
https://thoughtstowardsabetterworld.org/wp-content/uploads/2022/04/thoughts-300x138-1.jpg 0 0 dickbernard https://thoughtstowardsabetterworld.org/wp-content/uploads/2022/04/thoughts-300x138-1.jpg dickbernard2022-08-12 11:02:372022-08-13 10:57:00Voting for our childrens future
1 reply

“The Day After”, the day after. (Thoughts after) The Installation
Scroll to top