77 years ago today, the horror of the Atomic Bomb was unleashed over Hiroshima, Japan.  Three days later, the act was repeated at Nagasaki.

The debate will never end.  The act must never be forgotten, or repeated.

Here are two remembrances about the bomb, and the folly and the myth of war itself.

Second, the below column by my long-time friend Peter Barus in OpEdNews in July 18, 2020. reprinted with permission of the author.

(Today’s rendition of the Peace Boat, the Golden Rule, sets sail down the Mississippi River, beginning at Stillwater MN on September 2, 2022.  Details, including changes, will be reported here as they are known.  Here is a description of  the 2022 Golden Rule Project.  More can also be read here, starting at “Three.”) 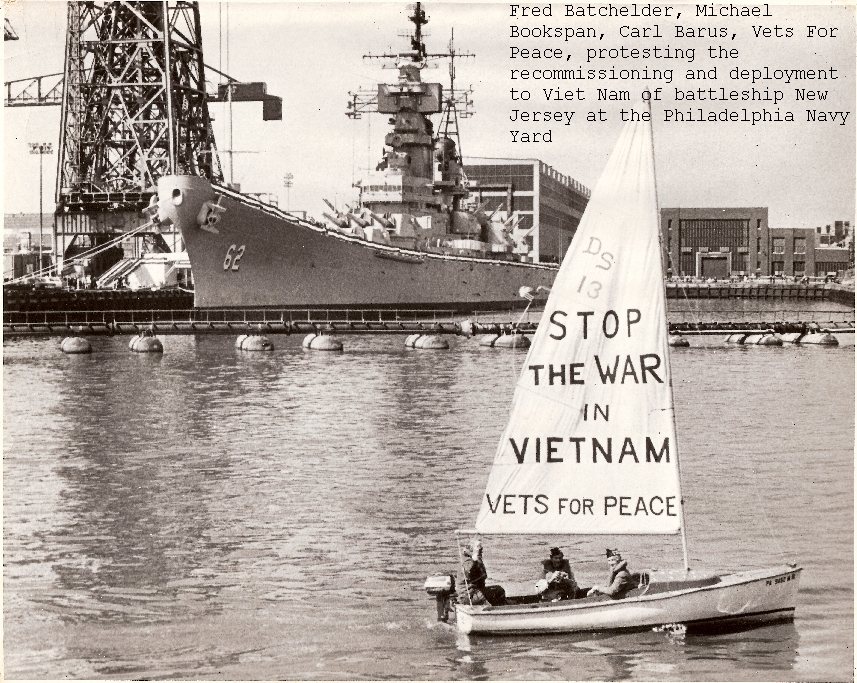 Vietnam War Protest ca 1968 Philadelphia PA, the Golden Rule photo from Peter Barus, whose Dad  is pictured in the boat.

Peter Barus: My father, a founding Vet for Peace, had served on the battleship Indiana in War Two, and years later was photographed with two members of the Philadelphia Orchestra in a tiny sailboat, tacking across the bows of another battleship being recommissioned in the Philadelphia Navy Yard, with STOP THE WAR IN VIETNAM emblazoned on the sail in electrical tape. There was precedent for this.
Some informal historical background…
“Golden Rule” was, and is again, a small two-masted sailboat that was sailed by Albert Bigelow and George Willoughby into the Atomic Test Zone to stop the atomic bomb testing in the Pacific that contaminated the Marshall Islands. They were repeatedly towed ashore by the Coast Guard, and were not vaporized. But they did raise public awareness of this awful crime against humanity, the Earth, and life itself.
That was in 1958, and at the age of ten, I went down to Fort Detrick, MD, for my first peace vigil. I believe I met “Golden Rule’s” crew there. We were all excited about Golden Rule. Albert and George had just returned from being jailed again. George was part of our Meeting, I think. Margaret Rawson, another Quaker activist, was there, and her husband was the head of the biological weapons lab inside the fort, which was the object of our protest. That afternoon Margaret’s husband was visited by the military commander of the fort, who said there was a crowd of “Communists” at the gate, and offered an escort home. “No,” he replied, “My wife is out there with them, they’ll be coming to our house for dinner, would you like to join us?”

At the time, the US Government was not only irradiating inhabited Pacific islands, and spreading plutonium across the landscape in the Southwest, but injecting it into indigent patients in a hospital in Cincinnati to see what would happen to them. They died horribly of course. But “indigents” is one of those words that means “not White,” so this was not considered newsworthy. In the late eighties a friend of mine had been a lawyer for the above-mentioned islanders, so shamefully treated by our government after being intentionally deluged with fallout in the tests the Golden Rule had been trying to stop. To this day they are still suffering the effects of that terrible crime, and have only recently been allowed or forced to accept a few hundred dollars and return to their original home island, with its glowing beaches. The islanders and the “indigent” patients had all been the unwitting subjects of a horrific experiment, the effects of which were already well understood in Hiroshima and Nagasaki to be a hideous variety of unbearable ways to die. I was told that in the Cincinnati case, by a court order, a commemorative plaque was installed in a boiler room of the hospital.
The following, sent this week by the Vets for Peace Golden Rule Project, is all the more poignant to me in light of these memories…

“Seventy-five years ago today – July 16, 1945, the United States detonated the first atomic bomb, which was named “Trinity,” in New Mexico. In less than one month’s time, the first three nuclear weapons had blasted the planet, unleashing a destructive force with consequences that will linger for thousands of years.
This issue of the Golden Rule eNews is devoted to remembering those horrible events and to educating ourselves about the continuing impact U.S. militarism in the Pacific, with particular focus on Hawaii.
The Golden Rule peace boat is currently in Honolulu, sheltering-in-place until Covid-19 restrictions can be safely lifted in the Marshall Islands and throughout the Pacific. In the meantime, we remain committed to our mission to rid the world of nuclear weapons and to sail for a peaceful, sustainable future.
Seventy Five Years Ago – July 16, 1945 The Atomic Era Began with the Trinity Test in Alamagordo, New Mexico. It Changed the World Forever.
Both the yield (21 kilotons) and the fallout exceeded expectations of the scientists by far. Wind carried the fallout over a hundred miles and rolls of film as far away as Indiana was ruined. “If the radiance of a thousand suns were to burst at once into the sky, that would be like the splendor of the mighty one. Now I am become Death, destroyer of worlds.”, said Robert Oppenheimer afterwards. Survivors and their descendants are still trying to get health care and compensation. Downwinders of that blast are still trying to get health care and compensation for the injuries to themselves and their descendants.
Because ten of the thirteen pounds of plutonium did not fission but were drawn seven miles into the stratosphere and rained back down on the planet, a huge area of the Southwest will be contaminated for 240,000 years with the most toxic poison known to man.
Just 3 weeks later, On August 6, Hiroshima, Japan was destroyed and 180,000 civilians died by the end of the year.
In five square miles of the city, 92% of the buildings were destroyed or damaged by the blast and fires.
On August 9, Nagasaki was bombed, with over 80,000 killed.
Tens of thousands died instantaneously and others died slowly and agonizingly as a result of burns and radiation. Survivors are still susceptible to leukemia, tumors, and post-traumatic stress. But the damage didn’t stop there – children and grandchildren of survivors had increased chances of small brain sizes, delayed development, blindness and increased susceptibility to leukemia and other cancers.
Atomic bomb survivors have worked hard all of their lives to assure that NEVER AGAIN will nuclear weapons be used!
Truman’s diary confirms that he knew Japan was trying desperately to get out of the war by opening a negotiating channel through Moscow.”

The salvaged and refurbished ship is in Hawaii, pinned there by The Virus on the road to Hiroshima. But the plucky little craft continues her voyage.
The list of outrages we now know about has grown in seventy-five years, and there are a lot of dots to connect. The persistent and rising resistance movement now includes and involves millions of people that Capitalism left in its toxic dust. It isn’t so much a movement as a kind of social sea-level rise, from the relentless heat of state repression. A system that can never provide either equity or environmental balance has defended the indefensible for too long.
But there’s a difference now. The surveillance is even more widespread, because it is in private hands, and therefore not constrained to secrecy so much as entitled to it. A Snowden inside The Book of Fe, um, Faces, for instance, might get sued, but wouldn’t have to leave the country for fear of being executed under some ancient sedition law or other. And the government can still get hold of your dossier the old fashioned way: buy it on the open market, like anybody else.
Except they no longer care about you. They’ve figured out that you are subject to currents and trends that are much more easily managed by software. You are just a data-point. It isn’t your opinion that matters, it’s where your gaze is pointed, that makes the big money now. And the big money decides.
There’s a new solidarity among people who are not in denial about what’s at stake for humanity. Old demographics have lost their meaning (which may explain why “targeted” advertising is losing so much money). It’s not the big names, Antifa or BLM or LGBTQ+ or “woke.” It’s much bigger than those great efforts combined. It’s simply people who don’t have a stake in “normal”. But it’s not that first wave of stake-non-holders, so clueless and terrified they flocked to a bloodthirsty psychopath. These folks watch and learn. They know the difference between shite and shinola. They know that money could be found to pay everyone in America to stay home until The Virus settles down, and build more homes for the people who don’t have one, and hand out enough PPE for everybody to change them often. Read up on this in Stephanie Kelton’s new book, “The Deficit Myth.” The banks and hedge funds just got trillions and what are they doing with all that loot? Sitting on it. Read all about that in “Levers of Power.” Kevin Young has just explained to us all how History Shows Disruptive Protest Works, where neither violence nor electoral politics can. And it’s just fighting fire with fire, as long as you identify the fire accurately: money is the fire, not the SWAT teams. They have to get paid to repress people. That means the people they repress have to spend money. And while you’re at it, look up Veterans for Peace, and see what you can do to help.
Just for starters.