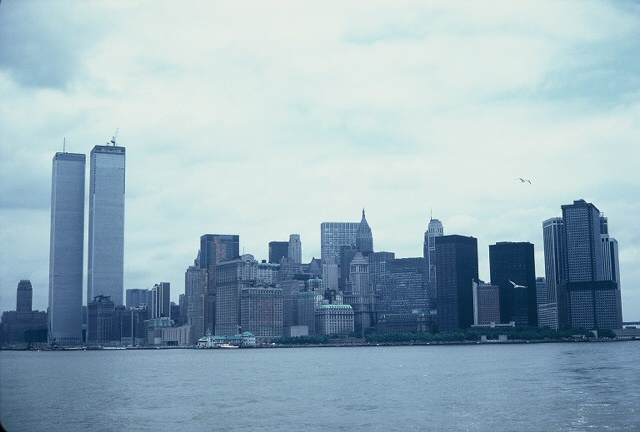 World Trade Center at the end of June, 1972 photo Dick Bernard from Statue of Liberty area

2,977 died on 9-11-01.  The death toll from Covid-19 so far is nearing 200,000 on this date.  At Shanksville memorial today the President noted “radical Islamist terrorists” and the “heroes” on the plane.  Earlier in the week the Presidents talk about other “losers” and “suckers” made headlines.  This mornings paper headlines this years terrorist attack: Russian hackers once again interfering with this years election, and the White House attempting to disappear this, or minimize it, blaming the Chinese and Iranians, and blocking full access to data by Congress to intelligence.  Yesterday news was of a whistle-blower about information control about who and how outside interference in the 2020 election is taking place.  Woodward’s book, and Peter Strzok’s…the Post Office fiasco.  The beat goes on and on.  Have we learned nothing in the past 19 years?

Voting in Minnesota begins September 18, 2020.  Everything you need to know is here.

I reached voting age (then 21) in 1961 seven months after the election of John Kennedy as President of the United States.

All elections have consequences; in my own life as a voter, none more so than this year.  On my 2020 ballot, there will be 34 offices for which I can cast a ballot.  I plan to vote here at home, as soon as my absentee ballot is received.

August 20, I wrote why I support Joe Biden and Kamala Harris for President and Vice-President.

More than anything else, we need to change the Tone of our country.  Recovery will be exceedingly difficult: Biden, Harris and the Democrats are up to the task.  Last week on this screen I saw the three words that effectively speak about the needed change: “Empathy, Kindness, Humility”, the  essential qualities in a united nation.  The words preceded an on-line statements by seven people, six women, six persons of color, including Kamala Harris, MN Lieutenant Government Peggy Flanagan and U.S. Senator Tina Smith.  The topic was the 2020 school year.  It was a powerful hour, hosted by Democrat’s leaders at local, state and national levels.

This is a stark year.

I can think of no election in which the American people face such a stark and crucial choice as this year: the 100th anniversary of women’s suffrage, the crucial decennial year of the U.S.census, the year when the Republican Party has de facto become the Party of Trump, throughout the ballot, everywhere.  And on and on and on.

Back on June 13, I wrote on national politics to a friend:  “My one statement for this letter is this: in the last 62 years only in the last three have I felt totally excluded – and in 35 of these years a Republican was President.“   Politics has always been a rough game, but never like now.  We are in an unannounced Civil War.  Change is up to us.

How I personally will vote is no secret; nor is the why.

This year I will vote by mail, as early as possible.  Normally, I’ve gone to vote on the day of the election.

As always, I try to cast a well-informed vote.  This is not difficult, but it does take time to be informed.

We contribute quite a lot to assorted political campaigns.  The most important thing any one of us can do is to network out our information to people in our own networks.

My incumbent state Senator is being challenged by the former mayor.  The Senator has become a state leader in her eight years in the State Senate (Minority Leader), and I’m impressed with how she’s done her job representing about 140,000 constituents in her diverse district.  Representing a diverse constituency is very hard work.  Obviously her Senate colleagues agree she knows the political process.  She gets my vote.  The challenger was a good mayor, to my knowledge, but she’s on the Trump side of the ticket…not a salable commodity to me, for certain.  I see her lawn signs cropping up, just emphasizing her first name – common tactic, which says nothing about her and what she stands for.

Down ballot races are as important to me as for President.  Many of the 34 positions on my ballot are for Judges of one sort or another.  There is a single contested race.  The Minnesota State Bar Association has a process where it’s members can weigh in on such.  You can read the poll result here.  You will note the poll shows 91% of respondents prefer the incumbent.  There is plenty of internet information about the challenger for anyone. wishing to ‘deep dive’.  The incumbent has my vote.

My towns city council has eight candidates for two positions on the city council.  One is incumbent; another incumbent is apparently not running again; a second candidate has impressed me with her energy and her qualifications.  I generally think my town is well run, and that is a strong motivator.

POSTNOTE: My plans are to have no further ‘political’ posts until the election.  I’ve said everything I can say.  I hope, in coming weeks, to do more retrospective things, largely based on a Covid-19 era project of looking through and classifying thousands of photographs taken over the years.  It has been an enlightening process, remembering assorted things from years ago.

A few days ago, Sep. 5, I did a blog, Road to Abilene. I said I’d watched only the first 40 minutes of the two hour talk.  Since then I’ve watched the entire workshop, and a good friend has offered a long comment to which I responded.  I really recommend taking the couple of hours to watch the entire workshop, which seems to have been presented to a military group in suburban Washington D.C. in 1981.  It is worth your time, in my opinion. 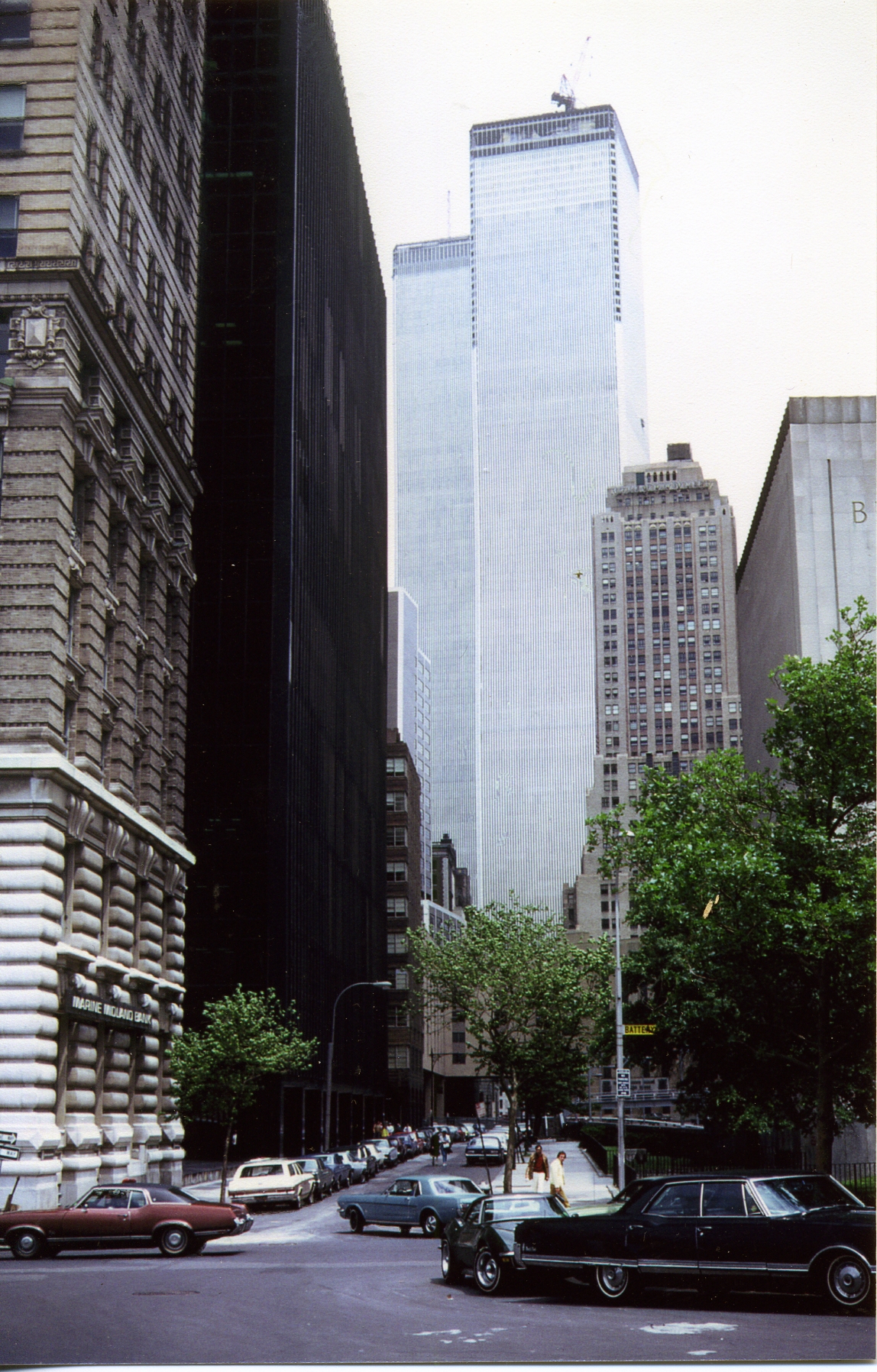 POSTNOTE: I planned this blog for Friday, but didn’t pay attention to the date, 9-11, till today.

I’ve noted, most, the dissonance with the continuing recognition of the tragedy of 9-11-01, as opposed to the relative disconnect with the seriousness of the Covid-19 pandemic in which we are now enmeshed, and the disastrous fires in the west, and so forth.

I won’t go into any detail other than sharing with you my own feelings about 9-11-01 at the time of 9-11-01.  You can read it here:9-11-01 Aftermath001and Post 9-11-01001 (click on each to enlarge).  There seems a dramatic difference in emphasis between today’s catastrophes in many areas, and today’s reverence for yesterday.

[in rereading the Post 9-11-01 memo, I note an item I did not forward, of, allegedly, Palestinians cheering the collapse of the Twin Towers.  At that time, 20 years ago, we were not yet besieged with misinformation – there was no such thing as YouTube or Facebook or Twitter – people were more trusting of sources.  Of course, I no longer have that source document, so I have no idea whether what I saw was correctly labeled, or where the photograph originated.  Lots of people look exactly like Palestinians, of course, including Israelis.  I am much more careful these days when nothing can be accepted at face value.  I always welcome fact-checking,]

POSTNOTE 2: 6 a.m. Sep 12: Overnight came Just Above Sunset, “The Chaos Agent” focusing on disinformation in the tragic fires in the western U.S.  It is worth your time.

Since the first reports of Minneapolis fires in the wake. of George Floyd’s death, I’ve had my suspicions about the perpetrators of the damage, and it has not been on the folks living in the affected neighborhoods, nor on Trumps favored invisible villain: “antifa”.

It will probably take a year or more, but the truth will out on who did what, when and where.  By then, it will be too late for the people who succumbed to rumors and fear and loathing.

As my writings right after 9-11-01 point out, our national response to 9-11-01 led to my becoming and remaining an activist.  19 years later we’re in the midst of an even greater disaster, aided and abetted by a President we freely elected, who is now shamelessly seeking reelection.

I repeat the too often used words: “caveat emptor”.  Let the buyers beware.

from Jermitt: I appreciate your sharing of your reactions to the news regarding trump and the up-coming elections.  The latest disgusting information about trump should be a strong lesson for everyone.  Unfortunately, many people will dismiss it.    I’ve seen and used the Road to Abilene in some of my workshops.  It provides a lesson  for all of us.   Thank you.

from Kathy:  Glad you included link for voting info.  The environment is so easily confusing for folks…registered, not registered, can I check if my vote has been received?  etc.

I am an election judge and talking to everyone that will listen as to options to vote.

I know where you stand and I am on the opposing side.   Have been Dem in the past but not any more.   I will vote for Capitalism which I believe is an issue on the ballot.   Biden is for Socialism / Communism as Obama said, “Biden and Bernie think the same.”    I will vote Absentee as an informed voter.   I have listened to both sides of the issues and agree with the Republicans.   Biden looks better on TV because they have factored in an old picture.   I do know that is possible — my friends in Canada have been photo manipulation for 40 yrs.
https://thoughtstowardsabetterworld.org/wp-content/uploads/2022/04/thoughts-300x138-1.jpg 0 0 dickbernard https://thoughtstowardsabetterworld.org/wp-content/uploads/2022/04/thoughts-300x138-1.jpg dickbernard2020-09-11 20:57:522020-09-14 10:10:18Voting
1 reply