Today is the return trip after Thanksgiving.  Despite warnings around Covid-19, many travelled, now returning home.  This seems a good day to reconstruct some travel in the old days, and this U.S. map, in a ca 1941 Shell Oil road map of Iowa, show the U.S. in those days (a pdf is also included below).  I’ll focus on my own family research. 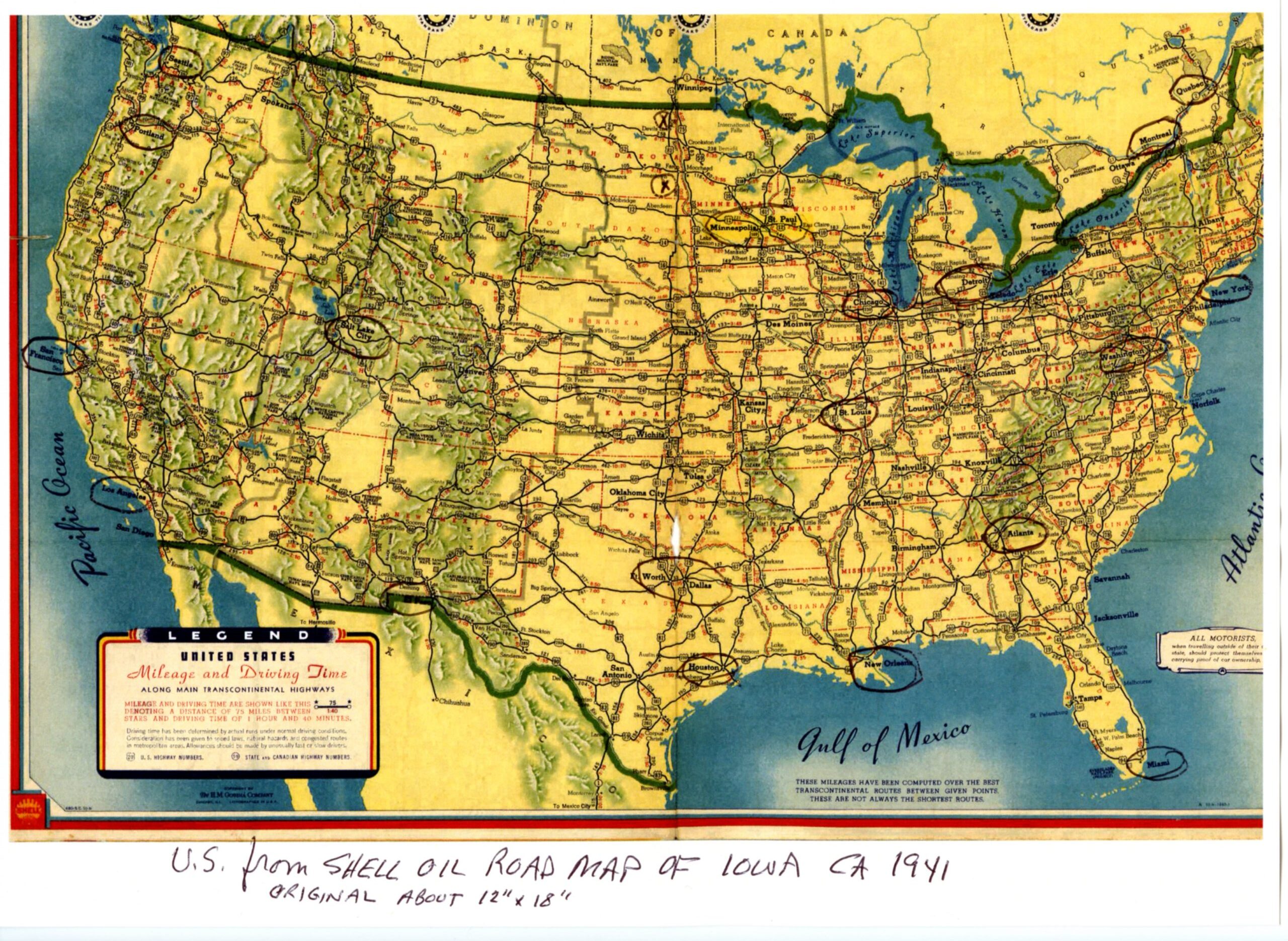 Traveling has always been a part of the life experience of immigrants.  All of my ancestors were immigrants to North America, the French side to Canada in the early 1600s; the German side to Wisconsin territory in the 1840s.

My first family reaching the Twin Cities (Bernard side) reached what is now the Minneapolis area (Dayton MN) somewhere around 1854, with six children in tow, from about ages 3 to 16.  My great-grandmother, was then about 5 years old, the second youngest.  Exactly how they came from eastern Ontario will forever be unknown.  Railroad did not reach this area until 1867; early roads were very primitive; riverboats did come up the Mississippi for those who could get to embarkation points downriver.  Doubtless there was lots of walking, but that would be an incredible task, particularly from home in eastern Canada with several young  children.

I know my grandparents Bernard took a major trip home to Quebec in 1925 almost certainly by train from Winnipeg, ending at Quebec City.  I have their photographs from that trip.

In 1934, my Aunt Josie moved west from Grafton ND to Los Angeles.  In 1939, living in Los Angeles, she made a major trip with friends to a Convention in Toronto.  It is possible that a reason for this trip related to Josie’s husbands death after a surgery.  They had been married only two or so years.  Years ago she gave me the AAA Road map which the group kept, which I adapted to simplify here: Josie Bernard trip 1939001.  It is a one page pdf with explanation (click to enlarge).  Josie was near life-long deaf, and the Convention was of an insurance company catering to deaf clients.  So, even in those days, there was mobility, certainly not to todays standards, but not unknown either.

In 1941, my Busch grandparents made a driving trip from North Dakota to rural Wisconsin, near Dubuque, the probable reason for the Shell Oil road map that is the source of the U.S. map above.  Family photographs revealed the reason for the trip. Grandma’s sister, her maid-of-honor at her wedding, Julia, was in the end stages of ALS (Lou Gehrigs disease), and this was a sad family reunion.  Julia died the next year, at about age 60.

Also, in 1941 as a one year old, I took my first long trip, from North Dakota to Long Beach California by car with my parents and grandparents.  It was on this trip that I met my Uncle Frank on shore leave from the USS Arizona, five months before he died at Pearl Harbor.  Dad’s writing recounted the route west.  A few postcards sent home to the Busch’s reveal that my parents and I came home via the west coast highway thence east from Oregon or Washington. 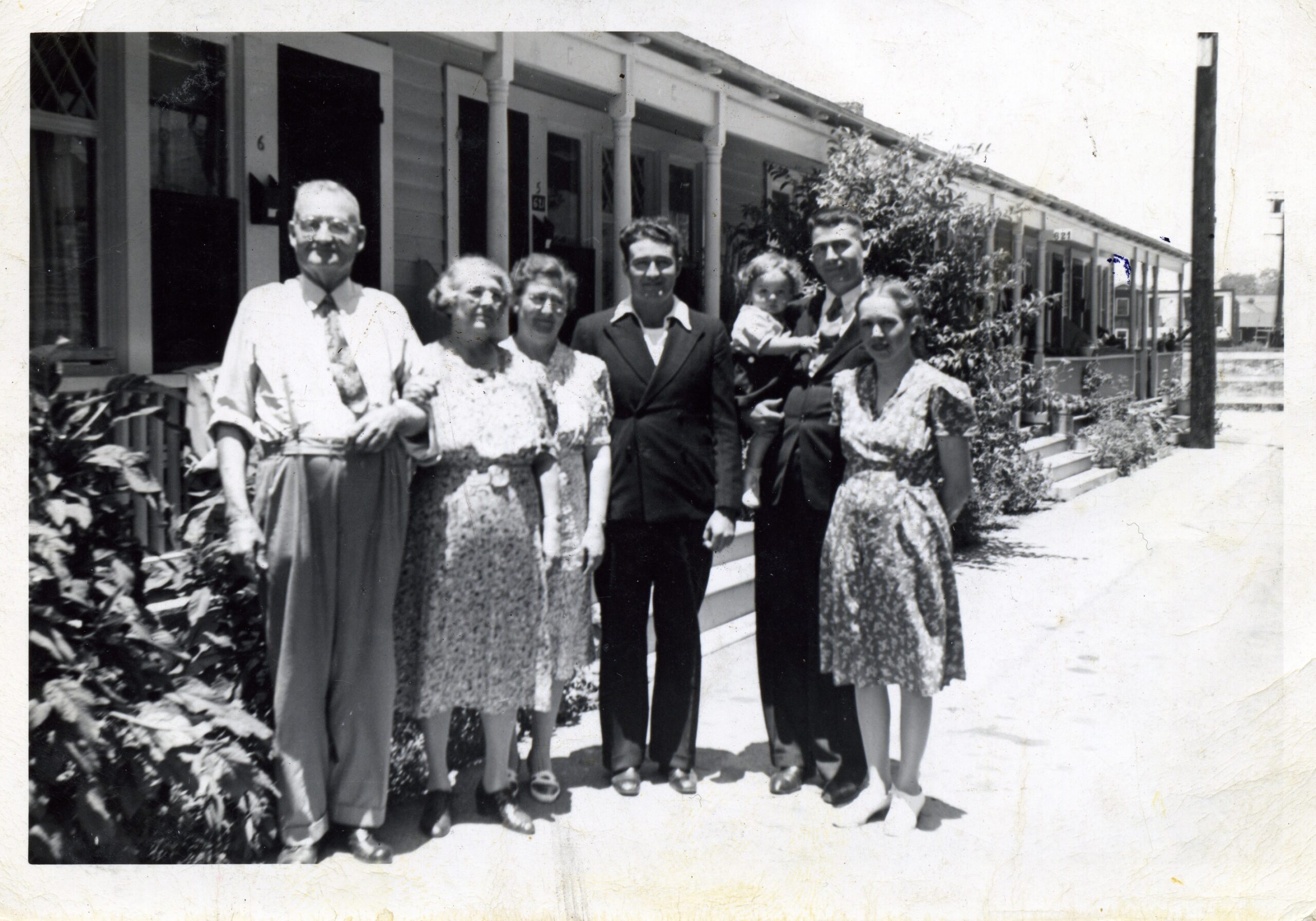 There were other similar trips, but they were pretty rare and on particular occasions.  The Busch’s probably went by train to Ft. Wayne IN for their youngest sons wedding in January, 1955.  The next month was their own 50th anniversary.  And so on.

But leaving the farm was not a routine matter.  There were cows to milk, just for one example.

But travel was not luxurious.  My memories begin when I was about 4, a year or so before the end of WWII.  I remember the trips as a kid would.

Those old cars were simply a device to get from point A to point B.  No seat belts, air conditioning, etc., etc., etc.

Now memories of the old days for a now-old-timer!