At my Thanksgiving post a couple of days ago, my brother, John asked me a family history question in the comments section.  I answered the question as best I could.  Thinking about this business of family and Thanksgiving got me to thinking about family gatherings generally in the old days. 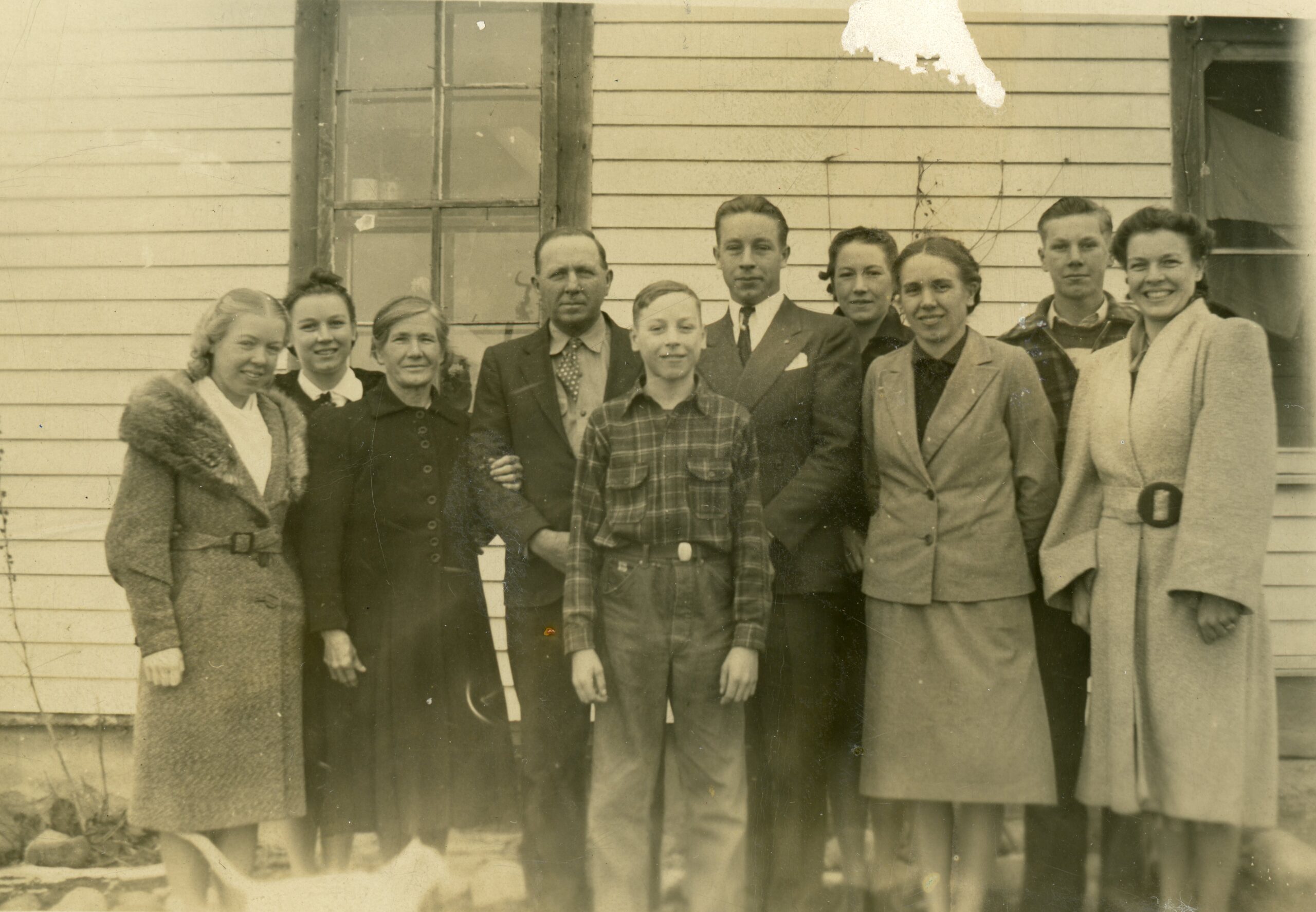 Luckily, the families from which I spring did a more than middling job of documenting life.  In those days, long before today’s technology, photography was not a simple matter.

From my own experience, any time we came to the farm, before we left for home Grandpa would haul out the old 1910 box camera and take a single picture, as the above.  As years went on, as children married additional cameras would document the farewell.  The above photo includes all of the children, someone’s husband, probably Uncle Duane, Lucina’s husband, clicked the shutter.

Not all photos were dated (by pencil on the back).  This was the case with this one.  Family historians have to become amateur archaeologists, so it is with this one.  Things like Lucina’s coat give clues.  I’ve concluded this one was probably late 1942, when Uncle George was making his last visit home after completing training at Great Lakes in Chicago, enroute to three years as an officer on the Destroyer USS Woodworth (DD 460) in the Pacific theater in WWII.

This would have been a pensive time.  We were at war.  Esther’s brother-in-law Frank Bernard, had gone down with the USS Arizona at Pearl Harbor a year earlier. The oldest child in this photo would have been 35.  Grandma and Grandpa were about 58 and 62 (they died in 1972 and 1967 respectively).

There was a certain rhythm to all of these family gatherings.  Weather dictated such visits, so they usually happened in non-snow times, usually spring, summer and fall.  There is no apparent snow in this picture, but no snow in December was not unknown.

If one child came home, likely two or three others were there as well.  Six of the kids were unmarried, three of them living at home.  The visitors came and went home the same day – motels were less available and the house was very small.

Dinner for company was farm fare.  Usually, the meat course was chicken.  Grandma would assess how many chickens were needed to feed the group. Fresh or canned vegetables and home-baked bread and dessert were always part of the meal.  This would have been after the Great Depression so food was probably plentiful.  Hard work kept the folks slender….

The house would have been very crowded this day in 1942.  Bathroom?  The outhouse.  There was radio, and telephone, no television.  Electricity wouldn’t come through rural electric till about 1949, though by 1942, the had a wind charger with storage batteries.  Entertainment? Probably a game or two or whist or canasta before the visitors headed for home.  And there was alway some singing.

POSTNOTE:  More about the Busch and Berning family at the North Dakota Historical Society.  Search archive collection 11082.  The collection is not yet complete – Covid-19 caused me to cancel my summer visit in 2020.  Maybe next year….