Thursday’s post, Seeing Ike, began with some comments about Afghanistan, but I said not a single word about the terrorist attacks on the same day.  Why?  Very simply, when I wrote the piece – published at 12:16 pm CDT, terror attacks in Kabul were not at all on my radar.  Kabul time is 9 hours ahead of here.  The major story was probably out there in fragments but still developing as I was writing, unawares.  Even in these times of instant communication, verification is sought before anything official is said, but difficult in the best of circumstances; still, essential especially because of so much misinformation.  (Earlier posts about the current Afghanistan Crisis are at August 16 and 19.  August 31, deadline day for withdrawal from Afghanistan, will be my first post relating to 9-11-01.)

The opinions are endless now, and in many ways “empty and meaningless” (to use a phrase I once heard that really applies here).  Everybody appearing behind a microphone is, as someone mentioned, in “CYA” mode: impolitely, “cover your ass”.  That is simple: deflect and blame.  The wisdom of hindsight is 20-20, of course, particularly when you can fashion your message without any intrusion of facts that don’t support your own position.

Molly, yesterday, sent an interesting blog post which seems reasonably fair and balanced.  Molly says: “Friends, This morning, a blogger I follow linked to this amazing story-within-a-story (which I had not seen elsewhere) regarding yesterday’s tragedy in Kabul… Quiet, unsung, acting for the reasons that make us proud and humble that these people represent our country and us. The Pineapple Express.  500 people. May we stay worthy of these Veterans and their work.”

Personal disclosure: my grandson, Spencer, is a Marine on active duty at this moment in history, although not in this particular theatre.

Thursday we elected to go to the program on the Gandhi Mahal grounds, as advertised in Wednesdays blog.  The program was outside; the forecast for the time was near 100% probability of rain.  The decision was made by organizer David Logsdon to hold the program ‘rain or shine’.  It was a hike to get to the site; there could be nobody there and a thunderstorm pending even if there were people.  We went anyway.

I would estimate that 30 of us, “soaking wet”,  showed up.  And the weather followed through, basically it was near impossible to avoid “soaking wet”.  Most of us huddled under a large umbrella; some of us, including organizer David Logsdon, decided to welcome the rain (which is badly needed here).  We were under the umbrella…it didn’t help much!  There was no wind, thankfully, but it rained for much of the time.

Nonetheless back home I wrote Dave and a few others:  “last night was one of the most inspiring events I’ve been to in many, many years.  Thank you for organizing it.  (The weather added to, rather than detracted from, the significance of the evening.)“.  Showing up is the essence of organizing.

The purpose of the event was to re-declare the site of Gandhi Mahal as a Peace Site, and to present owner Ruhel Islam with a temporary Peace Pole in anticipation of a new restaurant and complex in coming years.  The restaurant was destroyed by fire in the events following the murder of George Floyd in 2020.

“Ruhel Islam was honored with a PEACE POLE from Veterans for Peace & World Citizens on the sacred grounds of Gandhi Mahal restaurant – only a block from the 3rd Precinct in our beloved Longfellow community. The gathering was called Longfellow Rising: Another Evening of Peace, Love, and Curry.
As our friend Ruhel said following the loss of George Floyd, “Gandhi Mahal may have felt the flames last night [May 29, 2020], but our firey drive to help protect and stand with our community will never die! Peace be with everyone.” Ruhel also said, “Let my building burn, justice needs to be served. . . We can rebuild, but we cannot bring George Floyd’s life back.”
Gandhi Mahal is in fact being rebuilt at the very same location upon an even stronger foundation. To include an aquaponics community garden and fish farm.
As Mahatma Gandhi said, “We but mirror the world. All the tendencies present in the outer world are to be found in the world of our body. If we could change ourselves, the tendencies in the world would also change. As a man changes his own nature, so does the attitude of the world change towards him. This is the divine mystery supreme. A wonderful thing it is and the source of our happiness. We need not wait to see what others do.”
Thank you Dave Logsdon, Anita White, Thomas LaBlanc, Scott Fultz, Dawn Goodwin, Dick Bernard and so many others for participating and organizing this glorious event in the Longfellow neighborhood where my children where my children were raised.
Peace and all good Larry“

Here are some photos from the evening.  (It did rain buckets for a significant part of the two hour program; fortunately unaccompanied by wind and a minimum of thunder and lightning.) 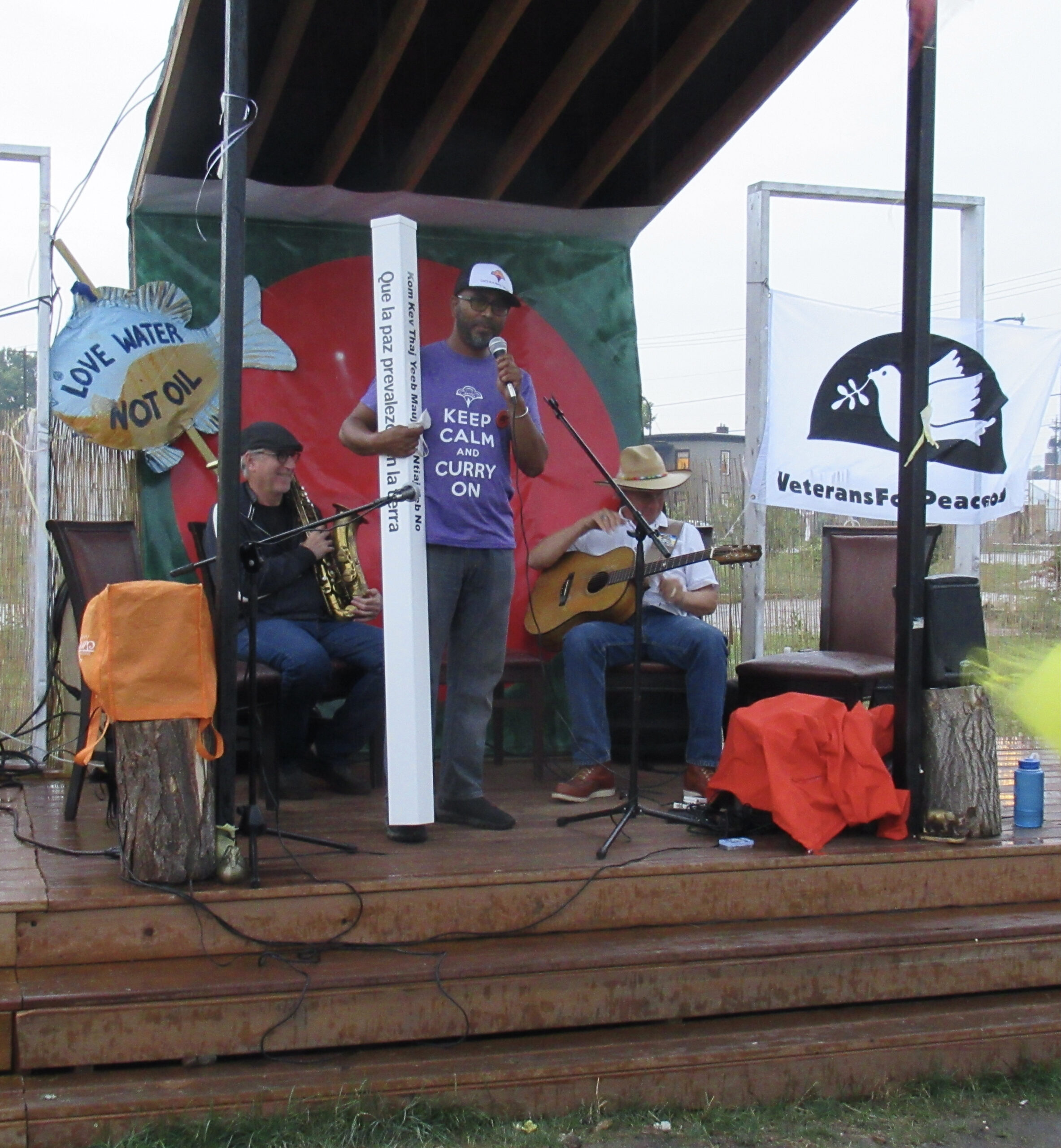 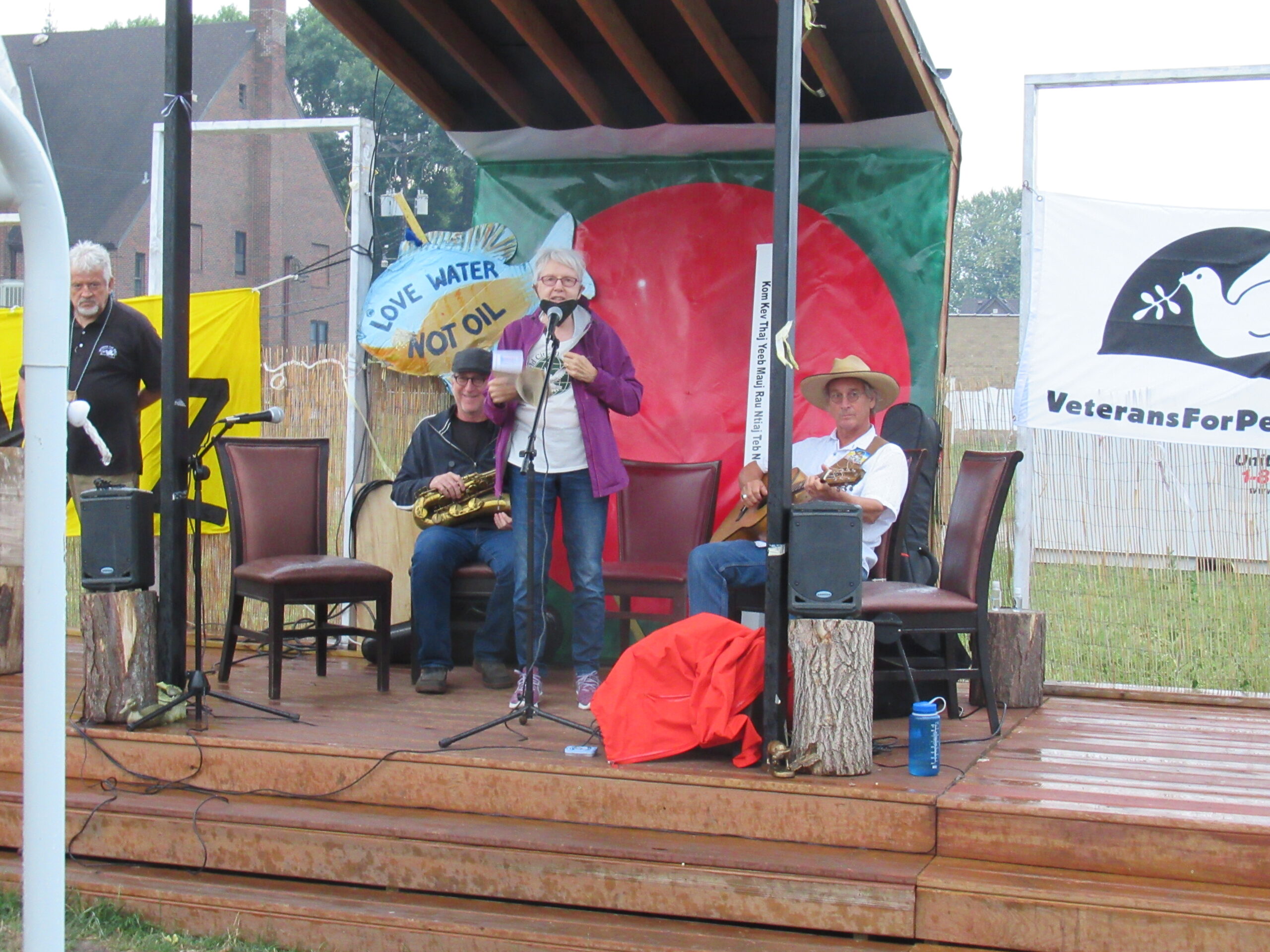 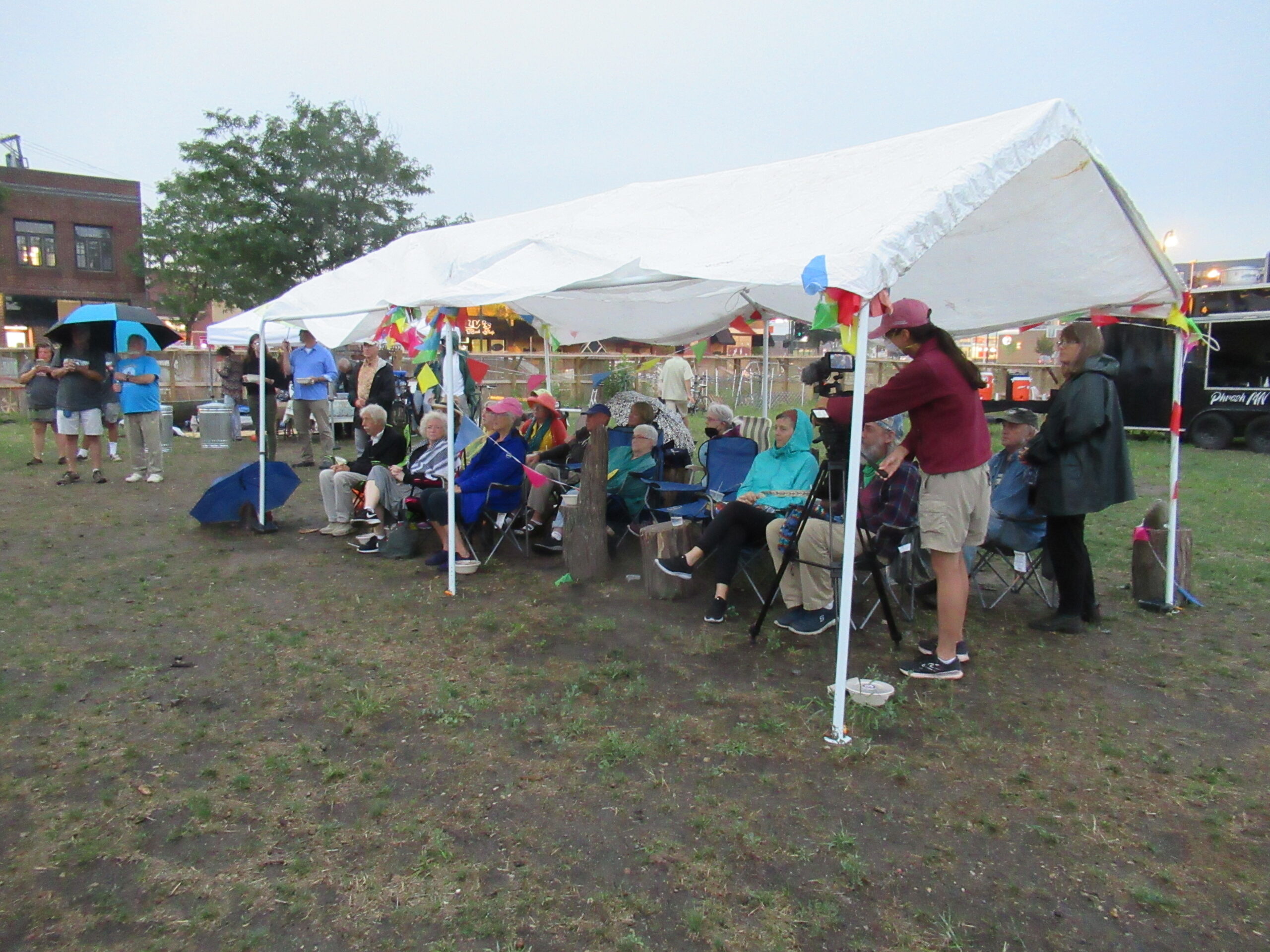 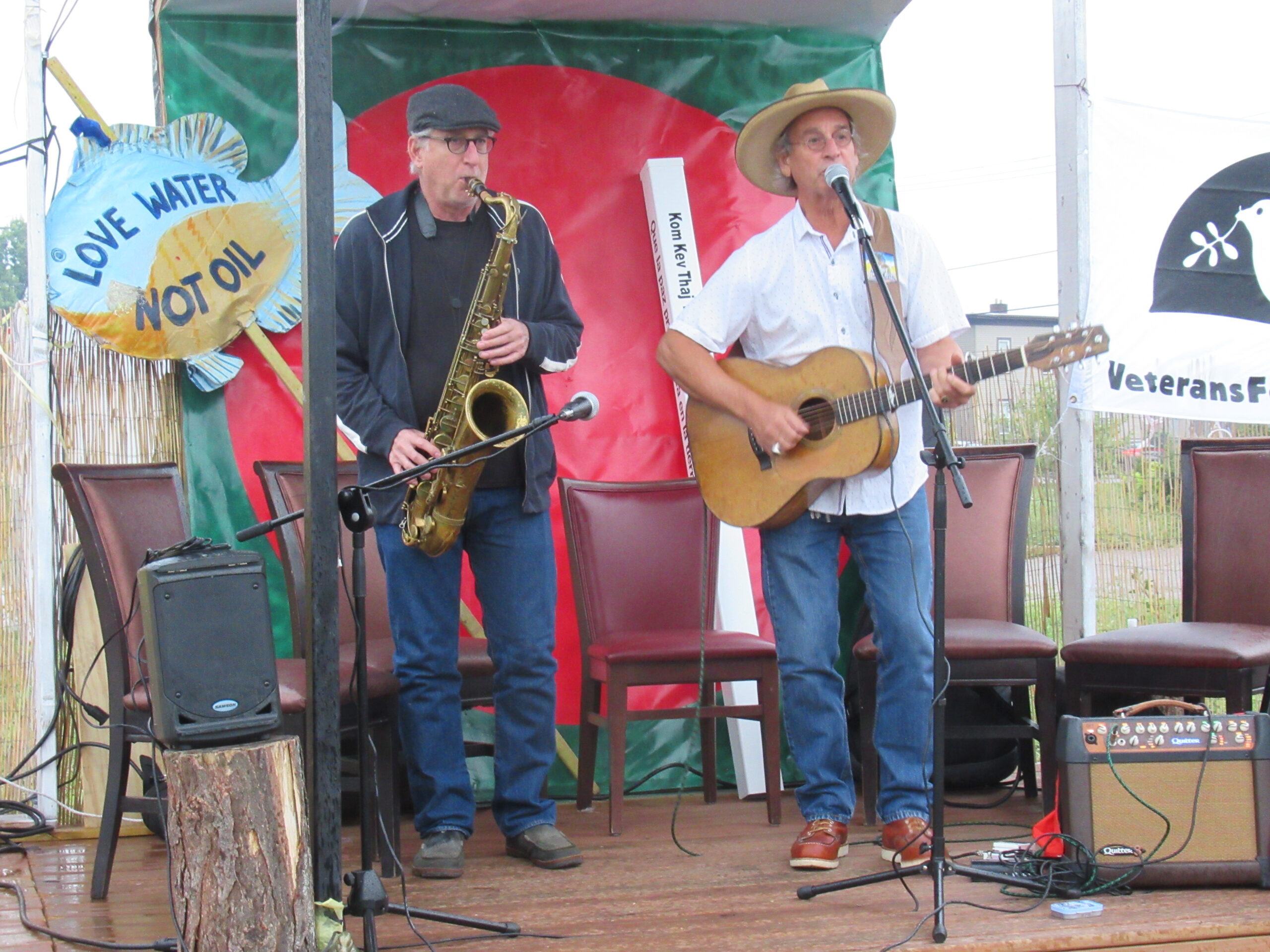 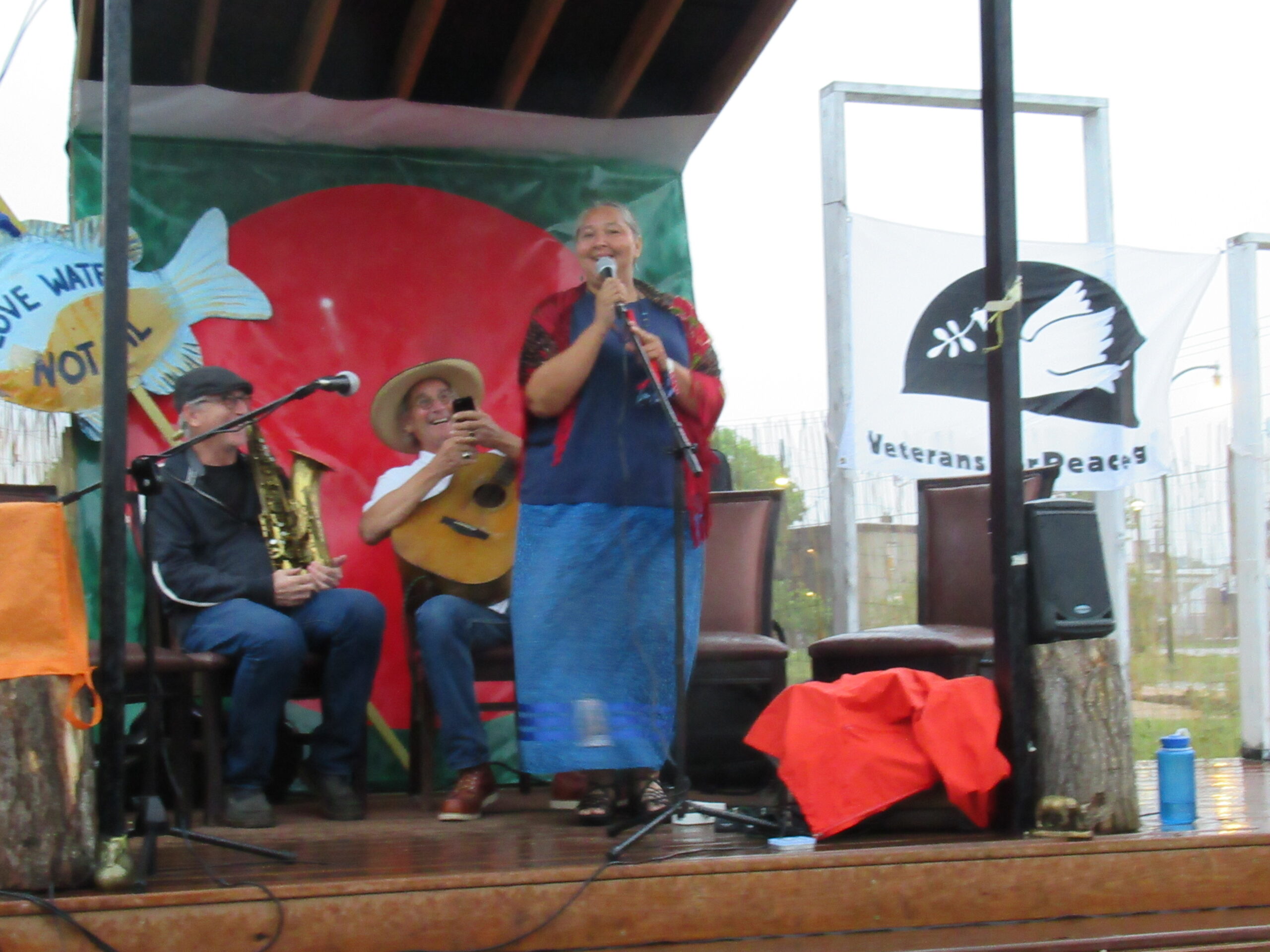 POSTNOTE:  Tomorrow, a few comments about Assumption; August 31, a post preliminary to the 20th anniversary of 9-11-01.  Do check back.

from Jerry:  Dick, thanks for the report on yesterday’s gathering at the peace site.  When you sent a notice about this gathering, I wanted to be there and support Rubel Islam and rebuilding Gandhi Mahal, but I knew my condition would not make it feasible.  I have good thoughts of this site.  I’m sorry you got wet but God knew we needed the rain.  I’m on a two week wait and see if my hip heals enough to avoid surgery.

Dick, responding to Kathy:  Thank you very much for this.  Here’s a good version on YouTube.  It was a spiritual moment for us, for sure.