The Exhibit is here through April 17.

The Exhibit is remarkably simple. There might be 15 banners in all, each with a brief story, presented as here: 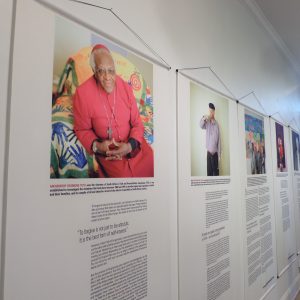 Each banner most often featured two people: the one(s) forgiven, and the one who forgives.

One is caused to think “where do I fit into this picture?” We all do….

A few hours before we attended the exhibit, I had a short e-mail exchange with a good friend, Donna. She had written with a very simple request, but with a far too short timeline. (Me) “Short notice! I’ll see what I can do.” (She) “We just found out yesterday…” So it went.

This morning I saw Donna and husband Rich at church, and she and I bantered a bit. (She) “I ask for forgiveness.” (Me) “Nope.” Of course, we were both in on the joke between us, and Donna will read this post as you are, and likely comment. It was a tiny thing, of course.

But how often do we let small things fester, and as they fester they become more and more magnified, however insignificant.

An example (one of many) comes to mind from about 2007. Somebody gave me a copy of the book “The Shack“, then new, today, still very popular.

I was smitten by the book (now also a film) – which is, in essence, a forgiveness story. So I let lots of people know about it.

What struck me was the response of the few people who didn’t like it, and told me so. The general response: “I just can’t forgive _____”, usually somebody who had wronged them in some way, sometimes a long while ago. From the outside, the complaint didn’t seem to amount to much, but living within it apparently gave their personal grievance a life of its own.

“The F Word” uses huge examples (Rwanda genocide; violence in northern Ireland – those sorts of things). Somebody killing someone else’s son, or brother or sister.

The stories are minimal, but gripping, and each draws the reader in, and perhaps even tempts the visitor to let go of some of his or her own baggage.

I encourage you to see the exhibit if you happen to live in Minneapolis-St. Paul area. If not, make contact with the coordinator, Louisa Hext, whose contact information is above.

The Stoop and the Postcard…. The American Monarchy
Scroll to top