A few days ago a friend mentioned that she hasn’t seen many blog posts from me lately. It’s true: I’ve been on-line less. Part of it is my wordpress has for some reason been cantankerous. Another, though, is a bit of disspirit. We are at a very dangerous time in our history as a nation, and too many seem to have the attitude, “What, me worry?” (Alfred E. Neumann, Mad Magazine.) We have an autocrat in chief; a Republican party controlling Congress that enables and exhibits enabling behavior that in the days when Alfred E. Neuman was born (1954) would have outraged that same party – coddling Russia and the like.

We’re in strange times. Just Above Sunset catches it this morning: The Old World Now Gone.

But I am an optimist, and I’ve had something of a mantra throughout life thus far that “patience and persistence pays”, and I’m not inclined to quit. So, at the end of this post is a bit of optimism from my state’s Attorney General, sent out a few days ago, and before that a couple of pieces of nostalgia from times preceding mine. Just some things to think about.

The Stoop and the Postcard:

Recently I came across two seemingly unrelated items: a photo I took of a door stoop in Norma Township ND in Dec. 1999; and a postcard sent to my grandmother in Henrietta Township ND in 1911. I offer them to encourage reflection about a country that was. 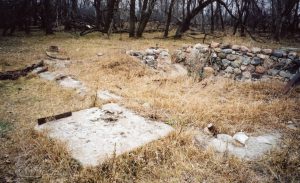 This was the entry to a country farm home where many children were raised about 100 years ago. My first wife’s mother was one of these, and this thus represents, now, five generations of Americans. All of us have our stories, our own stoops (that piece of iron on the edge – anyone who grew up on a farm, especially, knows what that was for – to at least put a dent in the farm dirt and manure from the barn….) 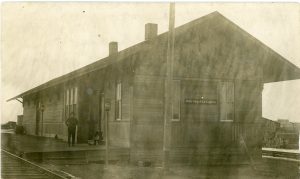 The contents of the postcard are below. Here is a pdf of the letter: Eagle Butte SD003 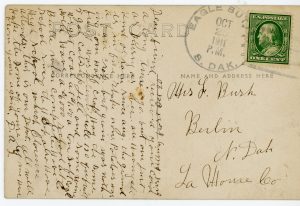 This was a card about relationship, the story never to be totally told. Grandma, then, was 27 years old, with two youngsters, four and two (the youngest my mother). “D.A.L.” was probably someone who had moved, perhaps a nearby farm wife, probably someone who’d taken up farming there about the same time as my kin: 1905.

I leave the interpretation to the reader. They needed each other then. We need each other now, more than ever. And we won’t survive if we continue to cherish individualism and polarization and power, at all cost.

“Leaders should inspire us to be our best. Our leaders achieve the most when they are optimistic about America’s destiny. The best leaders know that negotiated compromise, not unbridled polarization, is what moves America forward.

FDR’s optimism gave the country hope in the Great Depression. He observed: “The person with big dreams is more powerful than the one with all the facts.” And he described negotiation as follows: “For the young people here: practicality is a good thing. There are times where compromise is necessary. That’s part of wisdom. But it’s also important to hang on to what you believe.”

John F. Kennedy optimistically foresaw a moon landing, a Peace Corps to share America’s dream, and a new era of civil rights and individual dignity. To achieve progress, he noted in his inaugural speech: “Let us never negotiate out of fear; but let us never fear to negotiate.” He was quick to point out that “compromise does not mean cowardice.”

Martin Luther King, Jr. optimistically shared his dream that “…one day this nation will rise up and live out the true meaning of its creed…That all men are created equal.” He embraced optimism by declaring: “Let us not seek to satisfy our thirst for freedom by drinking from the cup of bitterness and hatred.” As to compromise, he said: “A genuine leader is not a searcher for consensus but a molder of consensus.”

Eleanor Roosevelt, a great inspiration for the women of her time, said: “The future belongs to those who believe in the beauty of their dreams.” Eleanor had this to say about compromise: “We must be willing to learn the lesson that cooperation may imply compromise, but if it brings a world advance it is a gain for everyone.”

Mahatma Gandhi described human progress this way: “Human life is a series of compromises, and it is not always easy to achieve in practice what one has found to be true in theory.” As to polarization, he said: “A principle is the expression of perfection, and as imperfect beings like us cannot practice perfection, we devise every moment limits of its compromise in practice.”

Social and economic progress occurs in America when we embrace optimistic leadership and treat each other with respect and dignity, not insults and name calling….”

Korea The F Word: Stories of Forgiveness
Scroll to top