For most of my adult life, I have made a practice of active citizenship, including following and participating in politics, though never an active interest in being a “politician” (which, generally in our past, has been an honorable profession).

Today we are in very dangerous times in our country. We freely elected a faux-King, a pretend -Emperor, and nobody in the assorted hierarchies seems to have figured out how to rein him in. Too many of us “drank the koolaid” (Jimmy Jones, for those who remember….)

It occurs to me that a retrospective might interest some readers.

I’m French-Canadian on Dad’s side, and by definition that’s Catholic in origin, coming to what became Quebec between 1617 (first known ancestor in North America) and 1757 (the last patronymic migrant ancestor; England defeated the French at the Plains of Abraham in 1759).

Back in those days, France was mostly the kingdom of Louis XIV and had essentially eliminated the Protestant Huguenots.

Last Saturday, I attended an interesting talk about the good old days of French Catholicism, and afterward sent some brief comments to others I knew who had attended. If you are interested, they follow, essentially unedited.

I did some pre- and post- reading about five items: 1) Catholic Popes of old Quebec time (1535-1759); 2) the three French Estates General (clergy, nobility and the rest….); 3) the French and European Dynasties – Louis XIV and the rest; 4) the Protestant Reformation (1517) and 5) the French Huguenots. The attached Kings and Popes001 and wikipedia articles [Estates General, France; Huguenots] will give at least a good beginning background for anyone wanted to pursue further.

Basically (it seems) the monarchy seems to have been its most dominant during the French-Canadian time. And thereafter, of course, came the first French Revolution (1789), Napoleon and all the rest. I was surprised to learn that Charlemagne was actually Germanic, not French! I knew William the Conqueror (Norman) brought French language to English nobility; that the current Royal Family in England is basically German.

The French structures carried over to Quebec, of course. The Church and Nobility were “tight”, and the Reformation [1517]brought troubled times, still apparent 500 years later. (I still have my 1955 Baltimore Catechism where there was much said about the superiority of Catholicism over the numerous Protestant pretenders. Page 21 had a chart headed “CHRISTIAN CHAOS (Simplified)”): 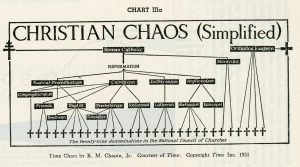 Christian Chaos, in the chapter “The Voice of History” in Understanding the Catholic Faith “An Official Edition of the revised Baltimore Catechism No. 3” . 1954

I don’t think there was a single word about Jews or Moslems.

Of particular interest was an aside about the suggested “schisms” of Abp John Ireland. Ireland never made Cardinal, largely, I would guess, because of his drumbeating for “Americanism” here. It didn’t fit the tenor of the times in Rome; perhaps he was not a good team-player. Of course, Ireland was trained in France; and had a great fondness for French-Canadians as witnessed by the side altar at the Cathedral to St. Jean-Baptiste. He was a Chaplain in the Civil War and moved easily with the movers and shakers of the day.

For the peasants and bourgeosie – the vast majority of the population then and now – the kings never had much to recommend themselves; nor the nobility nor the official church. Mostly there was an addiction to spiritual and temporal power. I say this as a lifelong Catholic. There were plenty of sins committed.

About a year and a half into the reign of King Donald the First, hopefully sufficient eyes are being opened so that we don’t repeat earlier disasters.

I close with a item sent along by Madeline March 18 – a memory from a Facebook post A Facebook originally posted a year earlier, March 18, 2017. Here is the originating link to Lincoln’s total speech.

“On January 27, 1838, Abraham Lincoln spoke to the Young Men’s Lyceum of Springfield, Illinois on the dangers facing American democracy. Lincoln was only 28, so it’s unlikely that many in his audience had him pegged as a prophet. But 23 years later, when the Civil War began, his words proved as prophetic as I believe they are today:

“At what point shall we expect the approach of danger? … Shall we expect some transatlantic military giant, to step the Ocean, and crush us at a blow? Never! All the armies of Europe, Asia and Africa combined… could not by force, take a drink from the Ohio, or make a track on the Blue Ridge, in a Trial of a thousand years.

At what point then is the approach of danger to be expected? I answer, if it ever reach us, it must spring up amongst us. It cannot come from abroad. If destruction be our lot, we must ourselves be its author and finisher. As a nation of freemen, we must live through all time, or die by suicide.

Lincoln did not anticipate the global reach of nuclear warfare, but his point remains sound. If American democracy fails, the ultimate cause will not be a foreign invasion. It will happen because “We the People” become so fearful of each other, of the economic, cultural, and security threats we believe to be posed by “the other” — and so dubious about finding a way forward while remaining true to democracy’s values — that we empower a fascist “strong man” who promises to make us “great” again. This is one way for a democracy to “die by suicide,” an act we seem to be contemplating at this very moment.”

The F Word: Stories of Forgiveness Kids, being the change….
Scroll to top