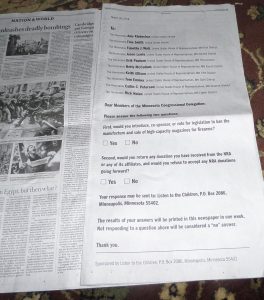 Much of this mornings Just Above Sunset was about Saturday in D.C.

I have just a few comments. (At the end of this post, some comments received about the earlier “Monarchy” post….)

I did not join a demonstration on Saturday. I thought this most appropriately a young people’s day, and it turned out wonderfully so. Going from home to a meeting in Minneapolis I drove by St. Paul and there were streams of young people on the bridges over my road, I-94, their demo just ending. The news spoke clearly for itself.

After Feb. 14, I noted that Parkland could well be, for todays generation, the 2018 Kent State (where 4 young people were killed by National Guard at Kent State University anti-war protest May 4, 1970.)

The message needs to go out to everyone, through everyone, that winning this fight (and many others) is possible, but it will take lots of stamina and creativity and willingness to break the established pattern of doing things, including playing by the rules established by money and traditional power.

Long ago I adopted something of a personal mantra “patience and persistence pays”.

Mostly, we tend to follow the dominant powers rules, and the result is predictable.

When the power people get into maintenance of power mode – using their particular means of exerting power – the task can seem impossible. But the tried and true works only if the subordinate group allows itself to be dominated.

So, for instance, people in power have learned over time that it is easy to simply wait out the opposition. Few in any “upstart” movement have the stamina to follow through, and power knows this. The NRA knows it has the time and the money to control the legislative conversation. BUT, legislators need more than anything else to be reelected, and if NRA PR and money becomes a liability to them rather than an asset, change can and will happen.

To change the conversation, the conversation needs to be changed by someone, and it can now be the kids, who will, after all, reap the benefits or the consequences of what the older people are now doing. The most heartening part of Saturdays demonstrations in Washington was that the speakers were only the kids. Adults not welcome on the stage. And the national and international response was extraordinary.

Everything else I have to say is superfluous. There is a lot of talent and determination out there, and a major election is less than seven months away.

Feedback from The American Monarchy:

from Onder: Thanks for sharing. It seems to me it is not democracy but liberalism that failed us. Spread of liberalism should have been accompanied by strong high level (UN and others) as well as self-governing local structures. They are, and have been for many years, not respected and ineffective. Is all we can ask from, say UN, monitoring of what happens somewhere in the world? Will it ever have a voice for justice and peace? Will it ever have an organizing capacity to coordinate, not military interventions, but advocacy for justice and large scale humanitarian help? Recent tragedies are so numerous to list.. Rwanda, Rohingya, Bosnia, Iraq, Yemen, Syria, Palestine… Without such organizing capacity to act, the field is left for evil few to wreck havoc on humanity. Vulnerable minorities can and do organize around principles to bond together or look for ways to build coalitions, but until majorities can organize around principles, we are left with watching fear merchants and charlatans turn a small group of ignorant people into a loud majority leading us into a national suicide Lincoln talks about.

from Marie: Thanks, Dick. Scary thoughts. I appreciate your research and sharing.
Alert, we must stay– and have conversations about this.

from SAK: Great post Mr Bernard, thoroughly enjoyed it!
Lincoln was incredible especially in that speech. It brings to mine the fall of the Hittite empire (here).

“The hieroglyphs revealed the name of the last Hittite King, his final war and more importantly the enemies he fought against. The archaeologist at last could learn the name of the foreign power that finally brought down the Hittite Empire, but the enemy turned out not to be foreign at all, the Hittite Empire was destroyed by civil war.”
I visited the site of that battle Kadesh between the Hittites & the Egyptian Pharaoh Rameses II – that was one of those battles that determined the history of entire regions. Nothing much remains to witness to the slaughter but not far from there the Syrian civil war raged about 3286 years later.

As Someone said history does not repeat but it rhymes.

Concerning “Back in those days, France was mostly the kingdom of Louis XIV and had essentially eliminated the Protestant Huguenots” I saw a French film “Saint-Germain ou la négociation” based on a Belgian novel by Francis Walder. It was very moving and showed, aside from negotiations over power, the effect of these religious wars on real people.

from a long-time friend: I liked the Christian Chaos chart. I recall writings about Martin Luther and the creator of the Episcopalian church traveling to Moorish Spain and marveling about how much better off the Christians were under Moorish rule than they were under the control of the church throughout the rest of Europe. These were the writings of the Biblical Archeologists. I didn’t recall any writings about Anglicanism. Can you elaborate on that for me and the head of that movement?

The American Monarchy Easter in North Dakota, 1905
Scroll to top