On February 28, 1905, my Grandmother Rosa Berning married my Grandfather Ferdinand Busch at Sinsinawa WI. They moved to Henrietta Township ND after their wedding. Their first Easter as a married couple was April 23, 1905.

Here’s an old card sent to them sometime in the early years of their marriage. 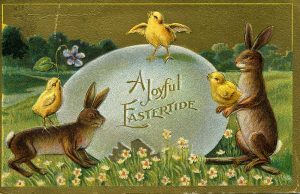 1905 was in the boom time for settlement in Dakota. North Dakota became a state in 1889; and railroads became the way to travel greater distances. Branch lines facilitated settlement in small towns far from main lines. Nearby Berlin got its depot about the same time the Busch’s arrived.

There was no local church until 1915, and it is possible that their first Easter might have been a rough 10 mile buggy ride to LaMoure. Church was important in their lives.

A treasure kept at the old farm was a bundle of over 100 letters written to the Busch’s in 1905-06 from their kin in Wisconsin, and others. In 2011 I compiled the letters into a book, “The Berning and Busch Letters 1905-06”, on file at the North Dakota Historical Society, Bismarck.

This morning I re-read the first few pages of the letters to get a sense of how it was, that first Easter on the prairie, for the 24 and 21 year old groom and bride.

The earliest letters were all from Rosa’s five sisters at home: Lidwina, Bertha, Julia, Celia and Kate. Brother August was also at home but didn’t write.

The letters indicate that Ferd and his brother Leonard, and relative John Terfruchte, who was a carpenter, came first, likely with an emigrant car, which included two cows, Spotty and Ruby; four horses, two of them named Jim and Jerry; and a dog Bruno. One horse was apparently injured enroute and had to be put down.

The home families contributed the animals.

The first tasks were to build shelter for humans and animals. This was apparently accomplished fairly quickly, perhaps with local help. Both bride and groom came from long established homes, and the beginning had to be trying, in many ways.

About a month later, probably during the last week of March, Rosa, her sister Lena, and possibly Ferd’s father Wilhelm, arrived.

The first letters from Wisconsin to North Dakota were written Sunday, April 2, all from the sisters and all very legible. One of them expressed worry about a March 28th tornado in St. Paul. Wilhelm writes on April 4, that he “came home [to Wisconsin] last Sunday” (April 2).

These were farm people, so the letters, all fascinating, were about farm things: nature, neighbors, activities back home in Grant Country Wisconsin.

Rosa and Ferd were the first to venture away from the neighborhood, and off to a strange new land, so there was, likely, lots of loneliness and concern on both ends. But, like young people in any era, they figured things out as they go. Their first child was born in January, 1907.

Grandma and Grandpa were married 62 years before Grandpa died in 1967, all on that rural piece of ground in south central North Dakota. Grandma died in August 1972.

Here’s to them, and the legacy they left in LaMoure County, and with their 9 children, all but one of whom lived to adult age, each leaving their positive example to follow.

Kids, being the change…. At the season….
Scroll to top