from Richard in California, overnite: What a Democrat Party Hoax!

Response from Dick: I have a diverse list (ideologically, virtually all are people I know or have direct context with).  The list is fairly large.  Normally there are few responses, none of which are censored, unless the writer specifically requests.  It occurred to me, with Richard’s, that the angriest responses, most always around ‘politics’,  generally come from elderly, white, men, frequently ‘immigrants’ to the west coast from the midwest.  It is just interesting.  As with Richard, above, the reasoning is five words long – in other words, even less than surface, totally emotional.  Guilt by accusation, not by evidence.

Just Above Sunset overnite: Stories Being Told about Day One of the Hearing in D.C.

Shortly the crowd enters the modern day coliseum, unlimited television screens all across the world, to watch the gladiators compete – the made for television round for the impeachment of the President of the United States.  This is the third such contest in my lifetime: Nixon in 1974; Clinton in 1998; now Trump.  Yesterday, the gladiators theater was the U.S. Supreme Court, and the legality or illegality of sending DACA’s back to Mexico or wherever – the Dreamers on Trial.  That wasn’t on television.  Then there’s the matter of finally killing “Obamacare”; refusing to deal with climate change, neutered by pulling out of the Paris climate accords.  On and on and on.

Killing Obama’s legacy is the aim, and along with it making people like myself politically irrelevant, the latter a Republican objective for many years.

This eagle, which has appeared on this page on several occasions, comes specifically to mind today.  I might watch the spectacle, off and on, when or whether remains to be seen.  As noted, I’ve followed this for years already.  This is a matter of the meaning of our United States Constitution. 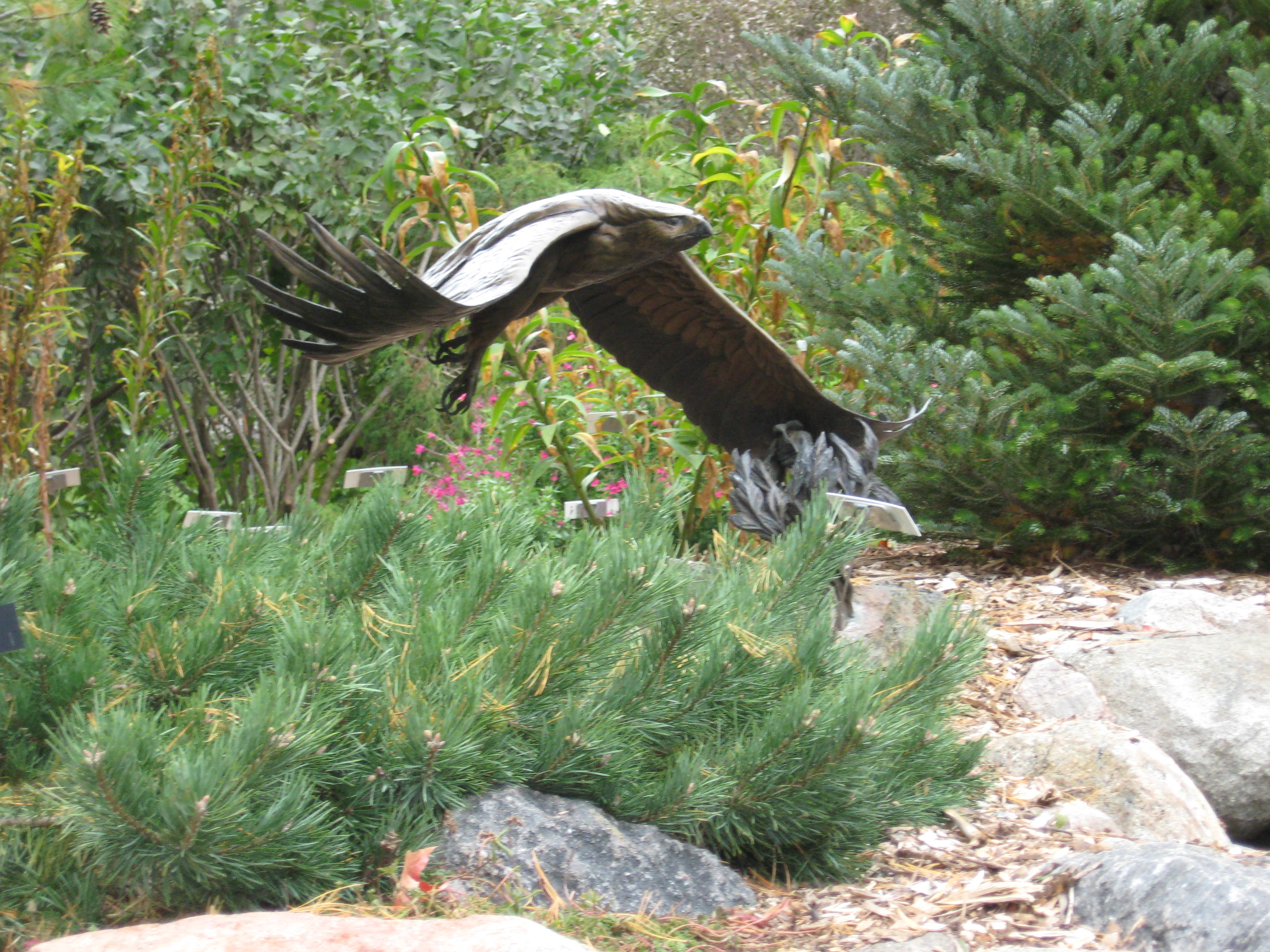 This eagle, like all birds that I know of, functions only when its two wings are fully functional and work together.  Of course there’s a tail – a ‘rudder’ – as well, and a body, and a head.  To thrive, they all must work together.  There are no useless parts.

A one-winged eagle is a dead eagle, regardless of how powerful its reputation.  So is a one-winged country; or a planet ruled by “heads” (autocrats).

And we are in a time, where one wing has come to near fulfillment of its aspirations to make the other wing irrelevant in the functioning of our country, and our world.  As in life itself, a body in disequilibrium is doomed.  And the public hearings which are about to begin will provide an opportunity to learn, and if we are smart, we will listen carefully, since the hearings are really about all of us as citizens of this still-great country.

11 years ago, about this time of year, my friend and colleague Mary Lou Nelson (pictured below, in pink) chose to gift to the Minnesota Landscape Arboretum in Chaska her favorite sculpture, which she named Messenger of Peace.

I was at the presentation, and as I remember her story, she had seen the sculpture by Chester Comstock several years earlier, and was one of those items she had to have (we all know the feeling!)  Her husband heard her, and later surprised her with the gift, which she treasured.  Comstock, at left in the photo, had titled his work “Hunter”, so I suppose there was some discussion about changing the Eagle’s name.  I am not certain why Mary Lou chose the name she did, but I did know Mary Lou.  While the eagle is, like all creatures in the wild, constantly on the lookout for its next meal, and is atop its particular food chain, it likely isn’t interested in accruing more than its immediate sustenance needs….

Mary Lou, who died in 2016,  was a long-time activist in peace and justice activities in groups like AAUW, United Nations Association and Minnesota Alliance of Peacemakers. Mary Lou Nelson 001

The dollar bill includes an Eagle in its symbolism?  Readers Digest has an interesting discussion of the symbols on the dollar bill, including the eagle.  Check it out. 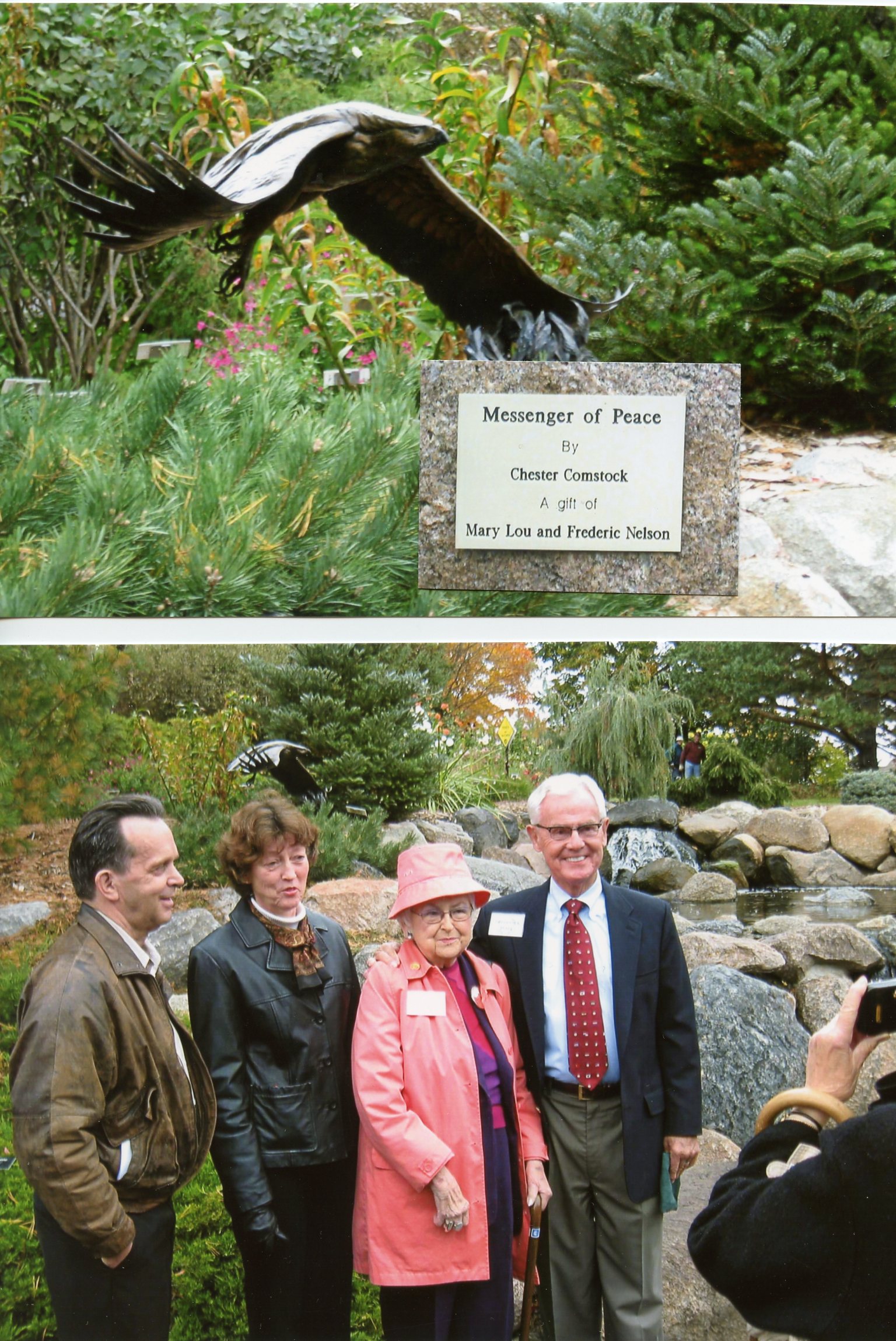 Mary Lou Nelson (in pink) with her gift to the Minnesota Landscape Arboretum, October 2008

POSTNOTE:  Comments are solicited.  I have no interest in watching the show on television.  I’ve been paying close attention to this for a long while.

Armistice/Veterans Day The World Is My Country
Scroll to top