Please note: Thursday, 1/20, Zoom conversation about the film “Until We Find Them”  with the filmmaker, Hunter Johnson.  Watch 31 minute film on-line beforehand.  These discussions are always very interesting. 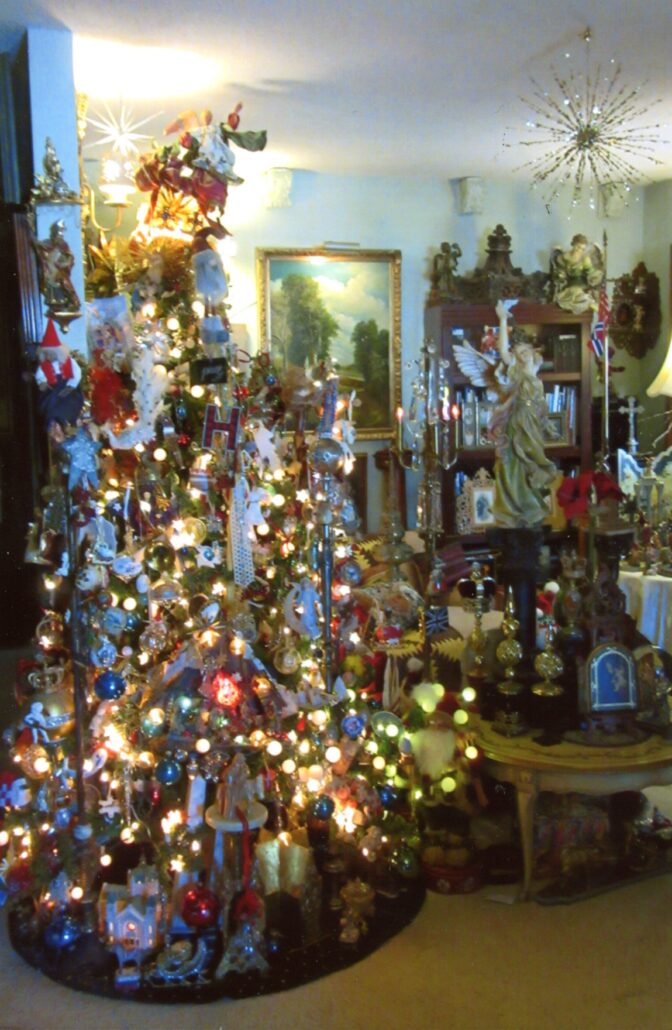 My Christmas present delivered on December 27 after a colonoscopy was to the point: “Adenocarcinoma” in the sigmoid colon.  “Moderate in size”, the report said.  Endoscopy found no problems in esophagus, stomach, and Duodenum.  Remote film capsule was swallowed (went down easy!), went through, and apparently found nothing in small intestine.

Dec. 26 I spent preparing for the colonoscopy, Dec. 25 was Christmas….

CT and MRI scans appear to show that the cancer has not spread, which is very good news.  Nobody guarantees anything – prudent.  But cancers warning shot for me, (in mid-October, 2021), was very helpful, and it was up to me to listen, and I did.

Enroute home from the Tuesday appointment, I met friend Kathy for breakfast and she showed me the above photograph she’d gotten from her friend, Ron, who was diagnosed with bone cancer in 1985.  The picture and the caption are his, from Christmas 2021.  This was his tree at the time of diagnosis in 1985, and its never come down.  His “Angel Tree”.

Life goes on.  I feel good.  I’ll keep you posted.

I come from a family where one branch has a rather high incidence of colon cancer, so it’s a known.  Mom died of it at 72, and it afflicted a couple of brothers of hers.  A niece died at 35 of it.  Doubtless there are others in the family…

So, I’ve been doing the colonoscopies since my 40s, usually every five years.  There was seldom anything of interest; the last one was clear.  That was six years ago and I was 75 – the point where such procedures usually end.  Why bother getting another one of those disagreeable procedures? Another lesson learned, at 81.  Sometime after the last one, the cancer began. It didn’t follow the calendar…or maybe it did?

Lesson: Genetics does matter, likely a lot.  Somebody recommended genetic counseling, which seems to make lots of sense.  Just knowing your own family history is helpful.  Three years ago I had my first major operation, aortic valve replacement.  I first saw that with my Uncle Vince, who had the same procedure at age 81…and died 7 years ago at 90.  In 2006, I had no idea that the same malady was brewing in me.

Not everybody will get a predicted disease.  Disease isn’t a death sentence, either, though the fact of the matter is that every one of us will die of something…it’s inevitable.

Lesson 2: We live in an extraordinarily advanced society when it comes to medical care.  I am amazed at the kind of service that is available to me, as a long-term Medicare recipient who can afford the needed supplemental coverage.  There is no reasonable excuse for not having ‘national health’ for everyone.  We owe it to each other.

A few days ago I was privileged to learn of a new film, Bending the Arc (Netflix) which tells the story of Dr. Paul Farmer and Partners in Health, a health initiative which began in impoverished Haiti about 1983, and expanded to Peru and Rwanda.  We watched the film, which is very interesting (near two hours).  We’ve been to Farmer’s facility in Cange, Haiti.  For the ordinary Haitian, I suppose it might be said that if you get sick, you either get well, or not. We generally don’t experience this harsh either/or fact in our society. Health care is a luxury few can access.   Bending the Arc, will bend your arc.  Take the time to watch it. 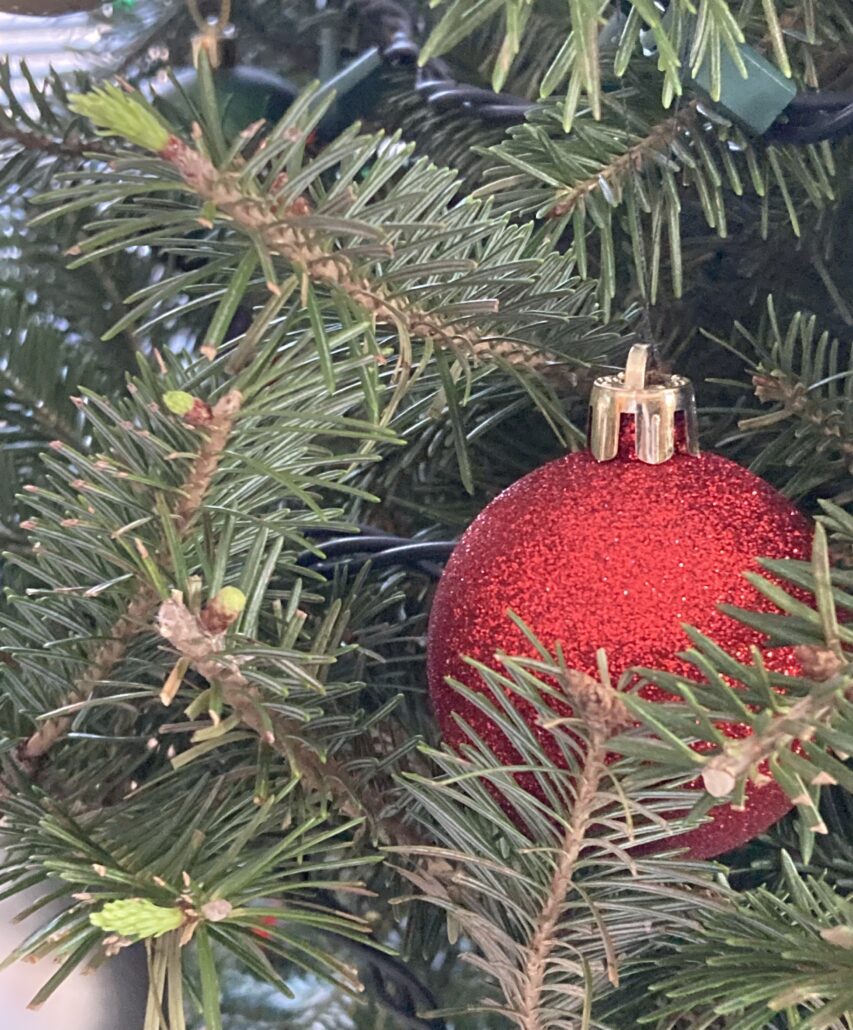 I believe you will come through with flying colors.  You’re important, ya know…  And I have an omen that the year is going to be a good one (after January, that is…  January we could just remove from the calendar).  Our Christmas tree is growing!  (Yeah, our inside tree.)  This is the 4th Christmas tree we’ve had that started to grow after the New Year – shooting out new sprouts all over the place – but it hasn’t happened for a long time.  I think that tree knows something.
*
response from Dick: there is something comforting about a Christmas tree…special kudos to a ‘real one’ that actually decides to sprout in the winter!
*
from Barry: Sorry to hear about the cancer Dick. Wish you well on that one. Glad they found it early. Good you have a positive attitude.
*
from Barbara: May the surgery be successful in getting you on your journey to be cancer free.
*
from Jane: I remember when in Haiti I asked how
An individual had died. They shrugged their shoulders. No one knew, even family. We are far from that, and so should they be…
*
Response from Dick: The second trip in 2006 we saw this kind of thing first hand.  I particularly remember a scene in a village in the interior.  While we we were there a group was carrying someone down the street, who was writhing in agony.  Medicine was basically inaccessible to them.  PIH, had just started a clinic in the area, but it was too late.  We also visited a TB hospital for younger people.  Really tragic place, the kind of memories that stick in ones mind.  We cannot imagine how good we have it, till we see the other side…
*
from Richard (my college roommate 1958-61): I like your attitude. We’re at the place in life where heath situations are going to be happening. I’m praying for you…don’t know if Methodist prayers work that well on you guys, but I don’t think they will do any harm. I hope things work well for you…
response from Dick: Not sure about the Methodist thing – you know how THEY are (this wouldn’t have been a joke in the 50s.  Catholics were even worse, if such is possible!). When you  and I started at college in 1958 ecumenism had just begun to sprout, as you recall.  May it never die!  Another friend is not a believer in “prayer” but sent the best wishes, to which I responded: “There is no copyright on the word ‘prayer’ of course.  I don’t think there’d be any universal agreement on an alternative descriptor either.  We’re all connected somehow, and some of us, like you and I and [another mutual friend], for instance, are a bit more connected than most.”
*
from Norm: Best wishes during your undercover review of the health care system, Dick!  (The polyp that they could not get out during a colonoscopy and had to be removed surgically along with a portion of my upper ascending was cancerous but was caught in time before it broke through the wall of the intestine looking for other areas to visit and become attached to. )
*
from Kathy: Well, be assured of our family’s prayers as you go into surgery with a positive outlook and healthy life beyond.
*

from Barbara: I’ll continue to follow you closely, at a respectful distance:

from Dan: Sending best wishes as you head toward surgery.

Your post was timely: I had my first general checkup in seven years yesterday, together with husband John (who’s not nearly so blasé). The doc suggested we consider DNA mapping, for its predictive value among other things.
*
from Larry: Thank you for sending BENDING THE ARC
*
from Gail: Thanks for the update, Dick.  Have a quick recovery!
*

from Lydia: I was sorry to hear of your cancer diagnosis. Your post was very indepth so, no need to ask questions about it.

My best friend of 30 years got a diagnosis 7 years ago , it keeps coming back but, he’s still here.
I hope your surgery goes VERY well. Early indicators (no spread) looks good.
You remain in my thoughts & (what passes for) prayers–asking the Creator to keep dear people in my life safe & asking to be a better person myself.
*
from Paul and Barb: We are sorry to hear of your cancer diagnosis but encouraged by your description of the extent of it and good feeling going into surgery.  We wish you all the best possible outcome.  Please know that we will be thinking of you over the coming weeks.
*
from Joyce: I will hold you in my thoughts, and in my heart; your friendship is very, very dear to me. The offer of assistance holds.
*

from Christine in France:  Covid is a nightmare too here….

It is a disease but also a political issue and scientists are not always saying the same……how do you want people to feel secured between those three points of view fighting between themselves….????
*
from John: Sending you love and good prayers for your health. I think you know that 6 or so years ago I was diagnosed with bladder cancer.  Caught it small
And early so it has been easy and things are clear now.  But it was a nudge.  A wake up call. A notice to use each day well.  I see that you already know that lesson.
Thanks, as always, for sharing your story and your wisdom.
*
from Arthur: It sounds like you will beat this one Dick. so glad you caught it in time.  You will be healthy and well once they get it out!
*
from Stephen: the best to you Dick
*
from Laura: Many prayers, Dear friend Dick!… I am with you in spirit!
*
from Judy: Thank you for the update.  I am sixteen years out from a double mastectomy and treatment for breast cancer. Modern medicine is wonderful.  I do hope you will do well and will stay in touch with your updates.
*
from April: I will be sending positive thoughts your way!
*
from Flo: Wishing you well and expecting to come down to visit while you’re in recovery from your colonoscopy. Yes, it’s a big deal.  Keep as active as you can, and find pleasure in each day. It’s the only one we can count on!
*
from Dick:
Somebody(ies) surprised me with package delivered yesterday.  Thank you to whomever it was. 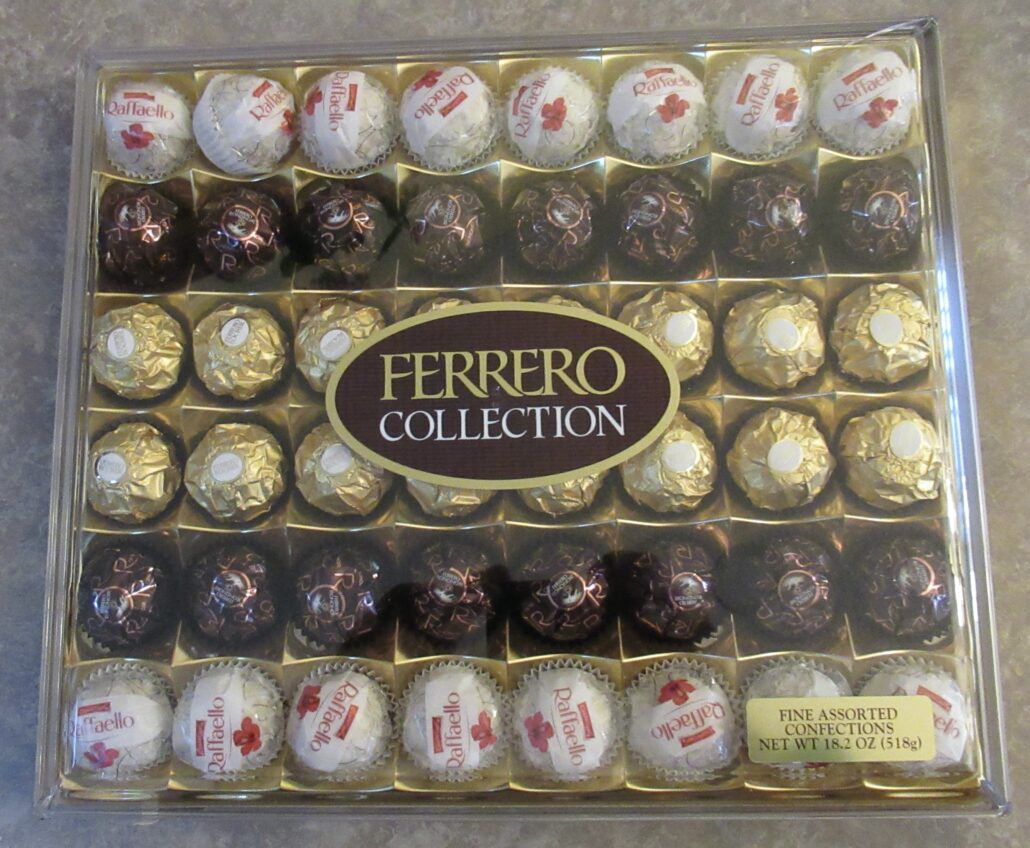