My friend, Jermitt, across the way in Wisconsin, has been sending rich memories of teacher organizing days in Wisconsin.  These are, literally, a book of many chapters, a great addition to history in Wisconsin.

A recent recollection, about Jermitt’s reunion with someone named Henry, got me to thinking back to my own old days in North Dakota…and my first trip through Wisconsin.

First, here’s the one page recollection by Jermitt of his reunion: Jermitt’s Reunion with Henry (click to enlarge image).  You won’t regret the diversion, I assure you.

I was “all country” in growing up years, and in 1955 and 1956 we made two most unusual (for us) trips from rural Mooreton ND (20 miles west of Wahpeton-Breckinridge) to Chicago.  Both trips were to visit Mom’s brother.   The first visit was right after Art and Eileen moved to suburban Chicago, the next, the following year, after their first child, John, was born.   The first year I was 15, the second 16.  This meant that on one of the trips I likely took the wheel once or twice on this great adventure; what an adventure for a kid!  Seven of us in the 1951 Plymouth Suburban.

Freeways were still in the future in the mid-1950s.  You didn’t go around towns; you usually went through them.  our most probable route through Wisconsin was U.S. 12, hi-lited on this map, borrowed from my 1961 Life Pictorial Atlas of the World.  Earlier, in Minnesota, our likely route was U.S. 52 from Fergus Falls to the north Twin Cities with a ‘pit stop’ near Anoka. 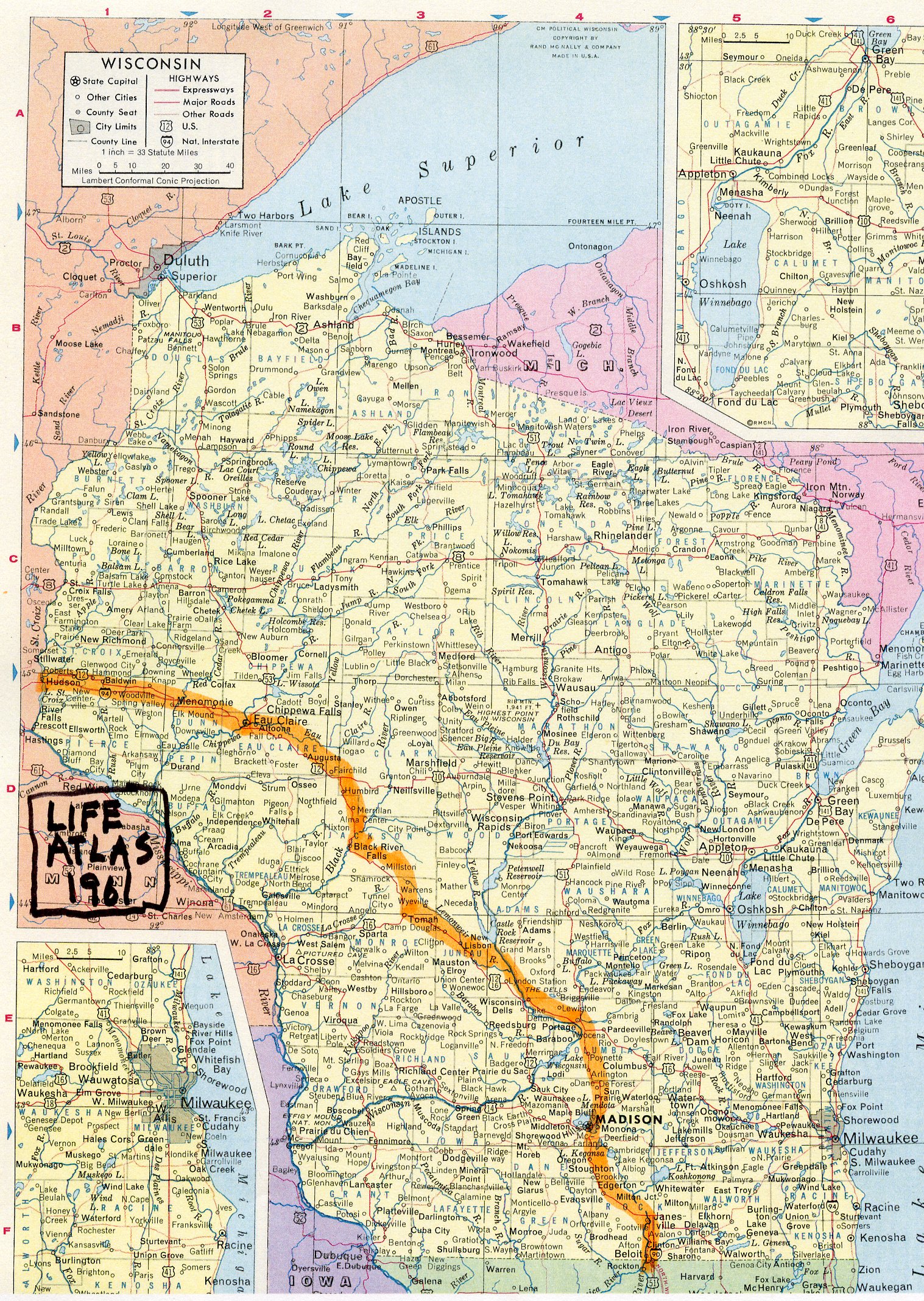 Being 15 and 16 years old, I wasn’t taking detailed notes on things like route, etc.  There is a family photo, apparently with me as the photographer, at the Rum River Park at Anoka MN, in suburban Minneapolis (below).  That would have been along Hwy 10.  I know, also, that one of the two years we stayed overnight with relatives in Rockford Il, south of Beloit.

In beween, I have two dominant memories: first, the long hills carrying busy highway 12 and its traffic, which were the pits if you got stuck behind a truck – not infrequent on the two-lane highway.  The second was the stop where my folks bought some absolutely wonderful Colby cheese, the  best I’ve ever had, a memory that will endure forever.  I wish I could remember the town.  I know it was small.

But I digress from Jermitt’s memory, which brought forth my own.

My Uncle and Aunt, newly married, had just moved to Chicago.  He began a career as a sales engineer for General Electric.  Both times we came to visit there we were able to take in a Major League Baseball game – something none of us had ever seen – this was pre-television in our family.  Both times, the White Sox were not in town, but the Chicago Cubs were at Wrigley Field.  So Uncle Art took at least myself and my Dad to see the Cubs.  We were down the right field line probably in corporate seats.  Both were quite the events for us.  Beautiful sunshiny days.

One of the years the opponent was the Pittsburgh Pirates, the other, the New York Giants.  In both years, I think both competitors were 7th and 8th (last) in the standings in the National League.  That made no difference to us.

I don’t recall who won or lost the two games.  It makes no difference.  It wasn’t until years later that I learned that hall-of-famer Ernie Banks was early in his career with the Cubs, and another hall-of-famer Willie Mays played for the New York Giants!  Both likely played as we watched.  Jermitt recalls another hall-of-famer – you have to read his writeup!

As one gets elder, thoughts more and more turn back to the good old days, which weren’t always so good, as we all know.  But along the ways there are memories that we treasure.  Enjoy them. 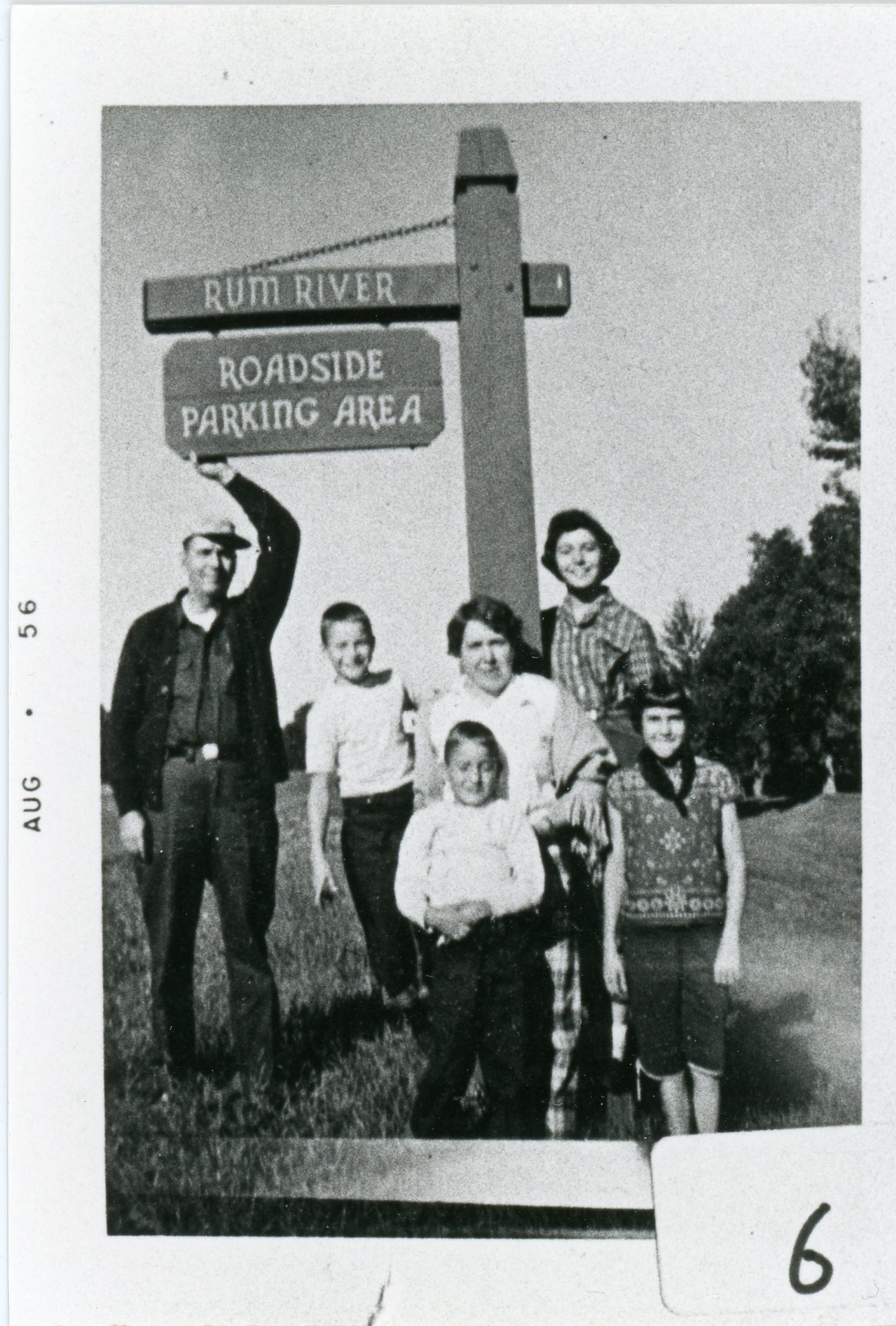 Aging brings memories…things that just stick in our brains, some whether we want them there or not!  It just is.

Jermitt’s memory of a meetup with a famous man before he became famous excited my own much more pedestrian memory, the two auto trips into Wisconsin in 1955 and 1956 (disclosure, today I live 10 miles from Wisconsin.  The people over there seem pretty much okay!)  65 years ago Wisconsin, and the ultimate destination Chicago, were hundreds of miles beyond the country road our 1951 Plymouth travelled to get to Minnesota, first, then the big cities of Minneapolis-St. Paul, then the far bigger big city of Chicago-land (actually, Broadview, where Uncle Art and Aunt Eileen first set roots.).

It has been an interesting trip down memory lane – all I remember is what is written above.

I’m a geography major, and I’ve always like maps, and kept many of them.

Our trip pre-dated the Interstate Highway system, credited to Dwight Eisenhower, ironically enabled by a Law passed in 1956, the year of our second trip east.   I first drove on brand-new I-94 between Jamestown and Valley City ND when I started college in 1958.  When I moved to the Minneapolis area in 1965, they were just clearing ground for I-35W going south from downtown.

Of course, at the time of our trip my short-term memory was consumed by not always cordial thoughts about pesky siblings, all younger than this 15 year old.  Oh, for “social distancing”, then!

I got to wondering what might have been our route in Minnesota and yesterday dug out one of the oldest road maps I have, from sometime in the 1950s of Minnesota.  Indeed, it perhaps was THE map for the trip described.  Below is the cover, Minneapolis St. Paul in pdf here: Stamdard Oil Map 1950s20200804

The old map reveals that Highways 10 and 52 joined about St. Cloud area, then diverted again, with highway 10 going into downtown St. Paul and thence on into Wisconsin as well.  I’m quite certain that highway 12 was then our route – it seems to have been the main connection.  .

The rest of the story is up to the readers imagination.  What are your stories?

Edge of the abyss…. The Bomb at 75
Scroll to top