POSTNOTE: from the Sunday, March 7 2021, Washington Post: well worth your time.  Excerpt from Chaos Under Heaven.

March 6, 2020 – it was a Friday – I stopped at my daughter Lauri’s home to tell her about an upcoming program of the Minnesota Orchestra I thought would interest the grandkids.  The previous day I’d read about it at the concert we attended at Orchestra Hall.  She expressed serious concerns about Covid-19, and got my attention.  We’d been to the Orchestra, and another event, the previous day, and at both there was some unease – like the calm before the certain storm – which prepared me for her concern.

There were 200 Covid cases at the time.  Lauri gave us hand-sewn face masks.  I still wear mine each day.

I doubt anyone could imagine the upcoming year.

My Covid Year started March 6.  Life as I knew it was cancelled.  The Orchestra like most everything else I valued shut down.  Of course, other folks have other stories, other dates.   What are yours?  It’s good therapy, I’m finding.

Monday of this week we had our monthly Zoom family call – there were nine of us, from New York to California to Texas, and a tenth sent a note – and I asked all of those on the call when their Year of Covid began.

The earliest was early February.  My sister, Mary, had been in Seattle and Vancouver, including a big conference in Seattle.  Hindsight, there were harbingers of the future.  The others gave various dates, the latest in mid-March.  My personal ‘life’ as it was ended March 15 – the last Sunday I ushered at Church. 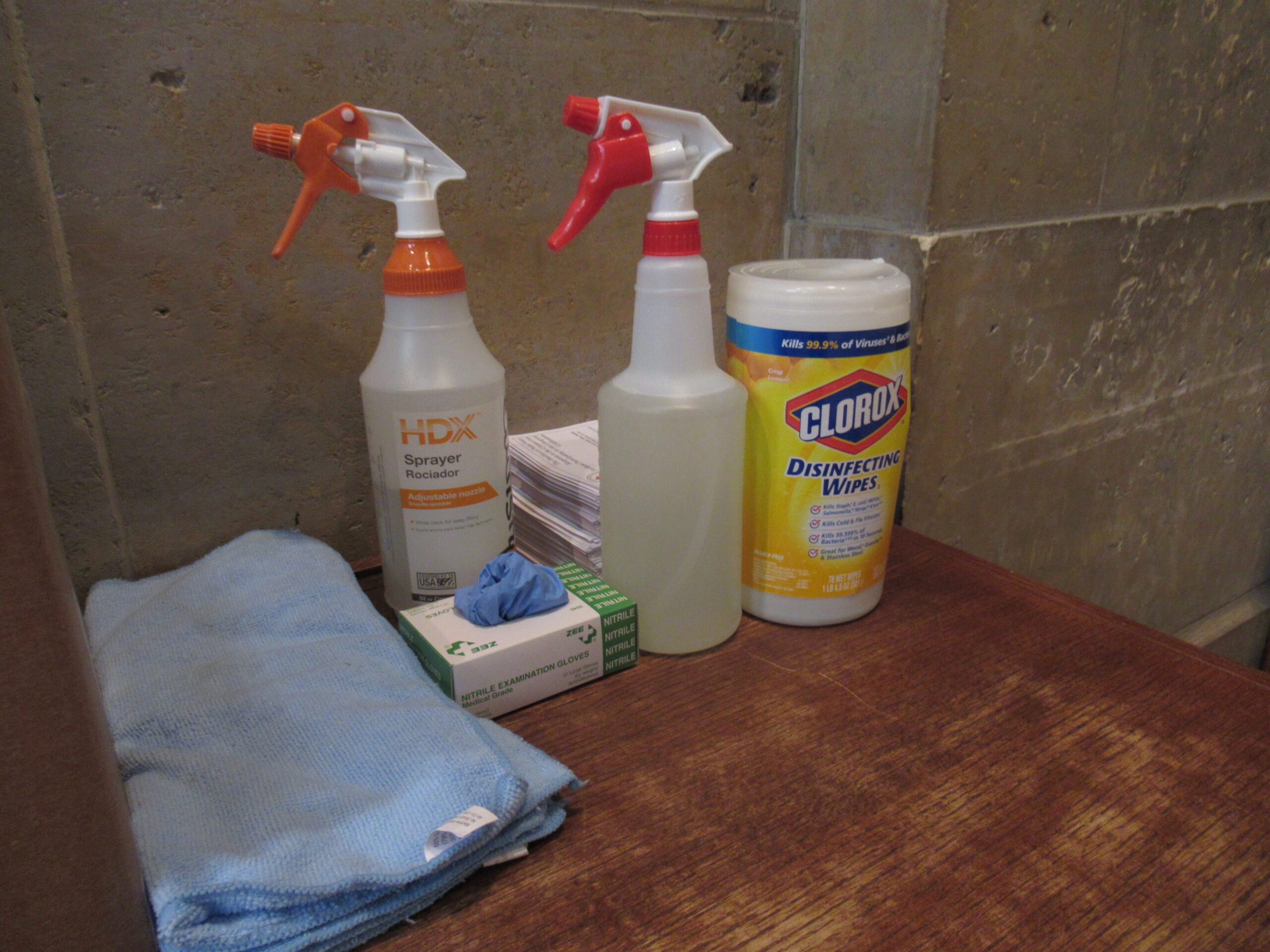 And on it went.

We each have our own stories of this 12 months in our own lives: thoughts, feelings, impressions.  All important.  Experiences we’ve shared, or not….

There is something to be said about new habits which I’ve needed to learn: masks, social distancing, washing hands…part of the caution litany of the year.  New habits can serve us well.

For me, I tend to follow the rules, and the science as known and conveyed.  We now know the evolution of the science as efforts were made to identify remedies to the looming crisis, which was looming by January, 2020.  I made mistakes on occasion.  But, as this first year ends, formerly unusual behaviors have become habitual.  I think this is good.  Recently someone said that mask wearing is as much a courtesy to others, as they are a necessity to the person wearing them.  It makes sense.  “Stop the spread” is a useful mantra.

A major “therapy” for me this past year was to take a drive every day, sometimes twice.  These weren’t long drives, mostly to rural areas nearby.  It was good to get out, helped keep cabin fever at bay, without risky behavior.

I turned 80 this year.  It was May 4.  Most everything was in lockdown.  A few days before, I took a photo of a street sign I had just passed by.  A nearby resident asked me why I was taking a picture of it.  He apparently thought I was up to no good.  He was at least nice about it.  I told him my story.  Oh…  May 4 there was no birthday party…a family reunion had been in planning…. 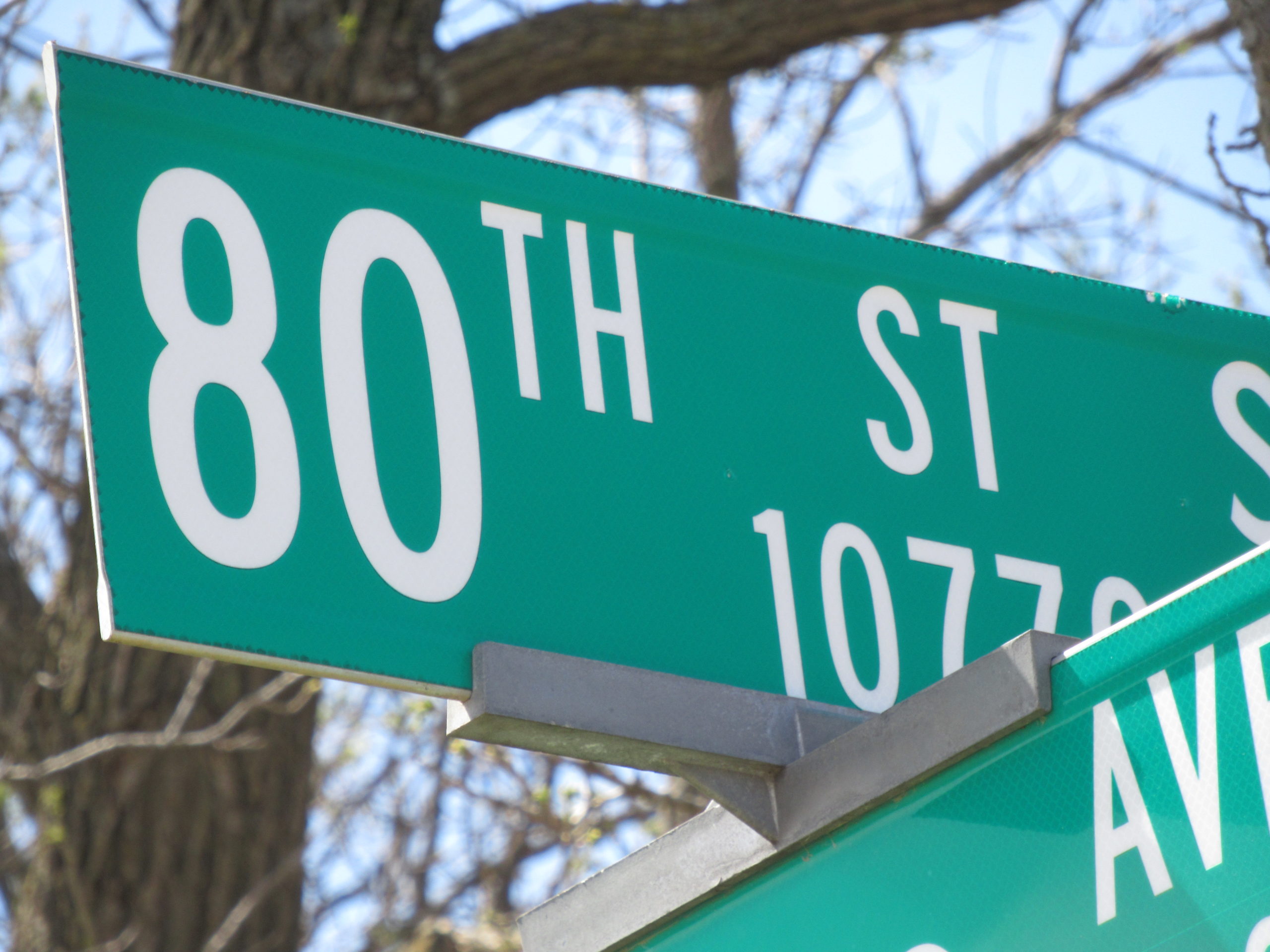 Wednesday of this week, March 3, I made my periodic “pilgrimage” over to the block where Gandhi Mahal restaurant, a favorite, stood one year ago.  It happened, this March day, that the apparent final truckload of dirt was filling the final hole remaining from what had been, a year ago, a busy vibrant block.  To my knowledge, no perpetrators have been arrested as of yet. 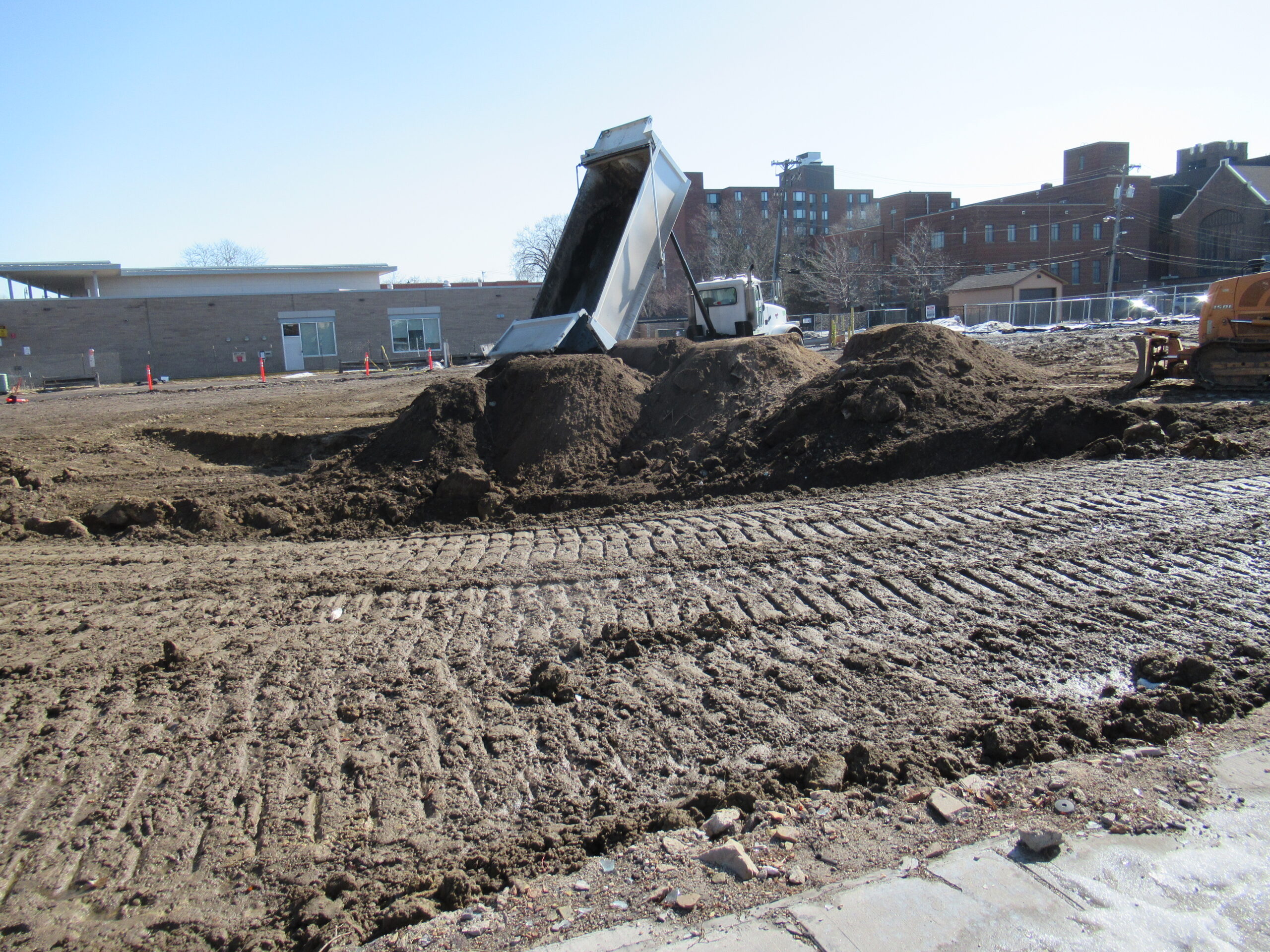 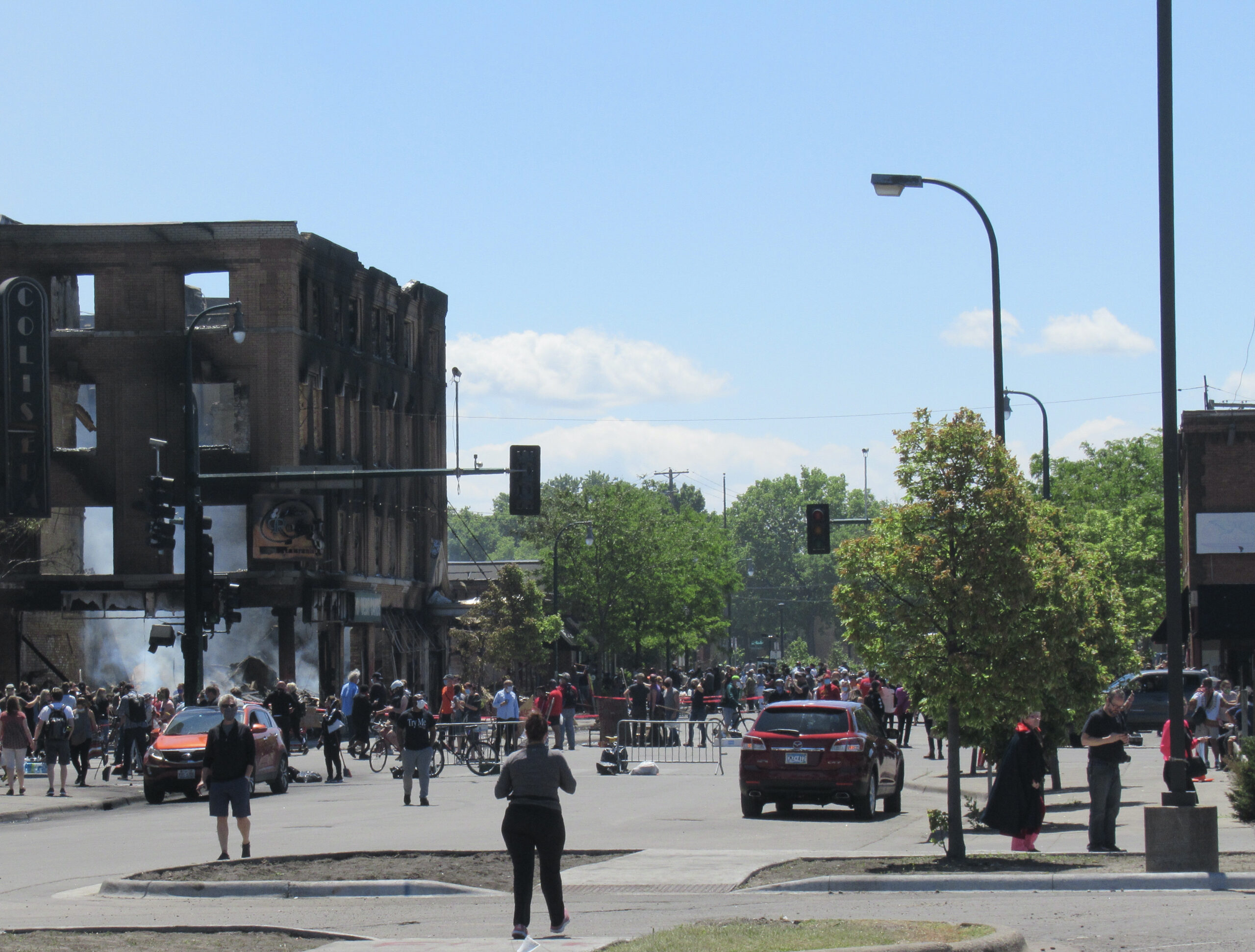 A year ago, Ruhel Islam and I had sat in the restaurant as I was planning an 8th annual program there for April 15.  That event was, of course, cancelled.

As I write, the trial for the policeman who killed George Floyd last Memorial Day – the genesis of the protests of last spring – is about to begin in Minneapolis.  The burning and the killing directly relate to each other.  All that is unknown is who burned down the block, and why….

At “my” Caribou Coffee – the place I started my day near every day since 2000, they now have reopened three tables, time limit a half hour, to see how it goes.  I sat there once, just to try it out!  First time in almost a year.  Strange how the familiar attracts.

The manager talked about the trip she hopes her family can take this summer…but will the attractions they want to take the kids be open?  They don’t know.  Uncertainty.

The manager of the FedEx next door, who I’ve gotten to know over the years, chatted about business.  The package delivery has been consistent and good, she said.  Walk-ins, like myself, have been way down.  People preparing advertising materials of all sorts, etc., have dropped off precipitously.  More people work from home.  Even retirees.  This week three Zooms for me.  It’s becoming a common week.  A year ago, Zoom was mysterious and rare.

What will the future look like, the two of us mused.  I said I thought that we would enter a new normal – the pandemic won’t end, like a bad dream, with no changes in how our environment looks and how people feel and act.  I think she agreed, but sadly.  We won’t go back to business as usual.

On and on go the stories…brief casual chats with cashiers and the like.  Most everyone has been adversely affected.  Not all.  The rich got much richer – the gift of 2017 tax cuts.  Deficits?  Not to worry…until now.

There will be life after this, though not for the half-million already killed by the pandemic thus far, and that’s just in the U.S.

Let’s make the best of this, folks.  We have no other choice.

from Peter: This year has been shockingly normal for me, except not spending nearly so much money (probably gasoline), and not having to drive to work.

It has been a year of annoyances, watching the tourists rushing to the ski resorts, sparking small outbreaks among my neighbors and friends who work at those places. The community heaved a great sigh of relief this year, when the Sackler family [oxycontin] sold their interest in one of the big ones.

I had retired from driving the local school bus, so missed the heroic food-distribution and wellness-checking duties that my cohort then had to engage in, while the system worked out how to keep children learning what we want them learning, and not becoming useless and dangerous attention-addicts like the president.

Other than that, Mrs. Lincoln, how was the play?

from Molly: directly relevant to the Covid year here.

…and oh, how tragic that it is still relevant…
Be sure to read the part about the author at the end, too.

from Sharon:  I really enjoyed reading your article. As I look back, the year has gone fairly fast which is surprising to me. I have to admit that we have not been bored, even though we have really missed theatre, music, church and sporting events. I have enjoyed going through old pictures, articles, etc. that I have saved over the years and getting more organized in our home. I so remember March 13th as that was the day that two granddaughters were sent home because of the COVID. Hannah, who was a member of the Concordia concert choir was on choir tour in the southeast. The choir was sent home after a concert in Nashville. She certainly did not know that it was the end of  choir, no more in school classes, and not even a graduation ceremony for her. Meredith, our other granddaughter, was on her way to dive in the NCAA diving championship finals in Ohio, when they were turned away from that on the final night. She still became an All American diver. In fact, she qualified again this year, and will be going to Alabama this year for the the championships. She is a sophomore at St. Cloud State University.

We have been seeing our family often, but friend lunches, etc. have been cancelled. We have lost many friends, only two from COVID, but have only attended one funeral.
I too, turned 80, and the family had a surprise family party for me for my January 4th birthday. We had more fun than a family could have. By the way, I liked your clever picture of the the 80th street sign.
Thanks for the great article.
https://thoughtstowardsabetterworld.org/wp-content/uploads/2022/04/thoughts-300x138-1.jpg 0 0 dickbernard https://thoughtstowardsabetterworld.org/wp-content/uploads/2022/04/thoughts-300x138-1.jpg dickbernard2021-03-06 05:43:182021-03-07 06:58:27One Year of Covid-19
6 replies