I have followed the Russia matter very closely since the beginning, and I will continue to follow it closely in the future.

Having said that, doing a search, I find I mentioned “Mueller” in blog posts in only three posts on two dates: 18 Dec 2017, and 17 February 2018 (there are two posts on Feb 17, the second here.  He’s mentioned in both – I checked).  NOTE: I mention these only if someone wants to fact check me.  They are there, not easy to find.

This matter is by no means over.

Don’t forget the boatload of indictments, and already the numerous convictions (which odds are will be pardoned) and issues galore waiting in the wings and outside the chief executives pardon authority. 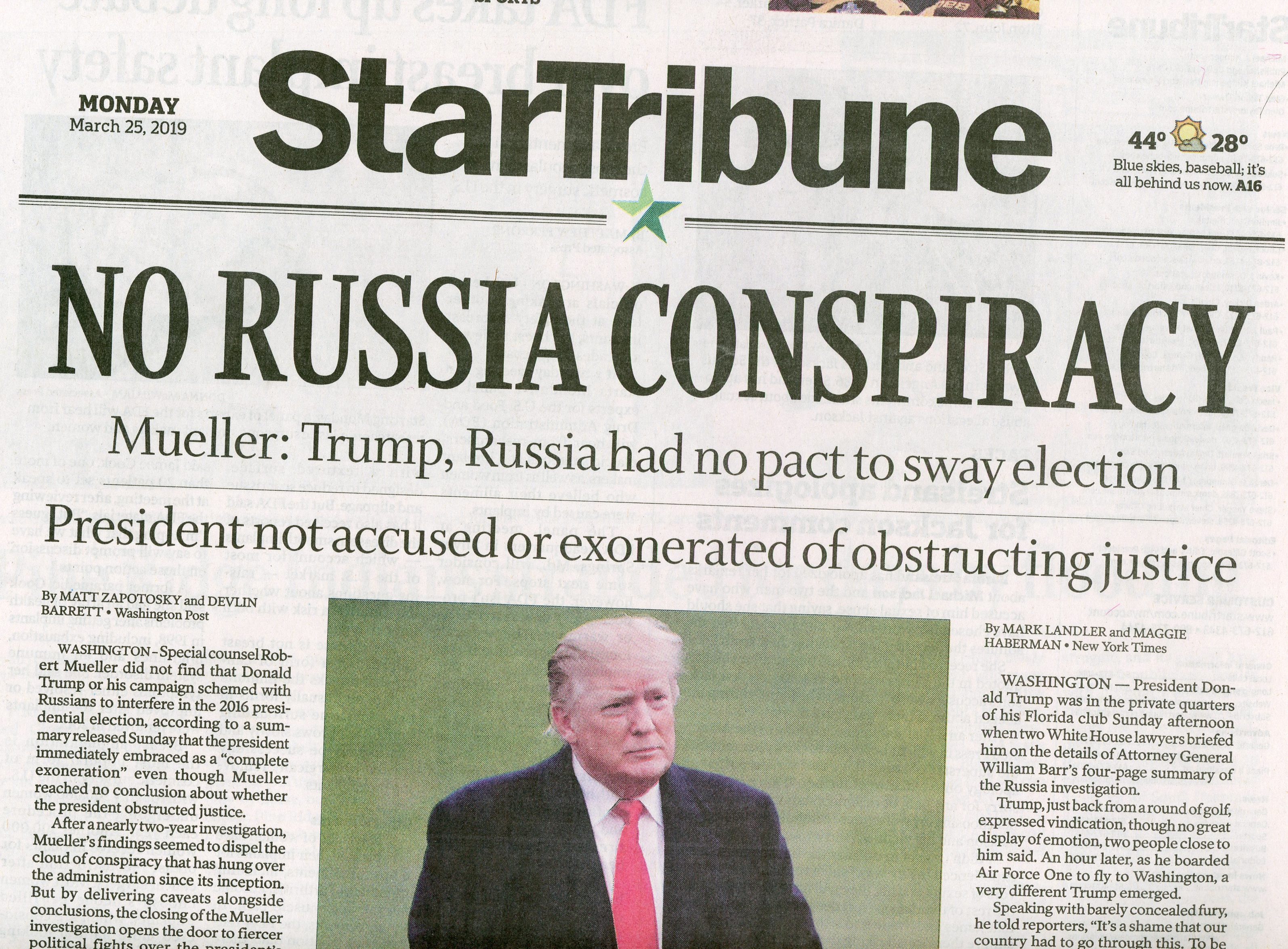 The morning Minneapolis paper page one headline.  The print headline is the old style version of a Tweet via Twitter…one doesn’t need to read the story to get the intention of the editors (who would certainly sign off on this one).

Not long before the morning paper came the Just Above Sunset summary of the previous days event: To Deepen The Pain and Antagonism, was long and informative as usual.

It is easiest, of course, to just read the headline…or the tweet…and come to a conclusion.  Depth is important to understand.

We’re now more than 24 hours into the debate on nothing at all.  The Mueller Report is in hiding, virtually no one has even seen the report except for very tiny snips; the President chose his conclusion; as has the Attorney General.  Nobody but a very few people know what is in the complete report.  Someday, perhaps.  I’ll comment when I know something more substantive than I do now.

This evening, March 25, we went to a very good meeting with Minnesota Attorney General Keith Ellison, and local legislators, Sen. Susan Kent and Rep. Steve Sandell.  We were in a room filled with people who give a damn about community and country; community leaders, and advocates for this or that issue, and just plain citizens.  It was a good place to be.

It was a refreshing meeting, very civil, question and answer handled in a superior way that I’d like to see used more often (note at the end of this post.). 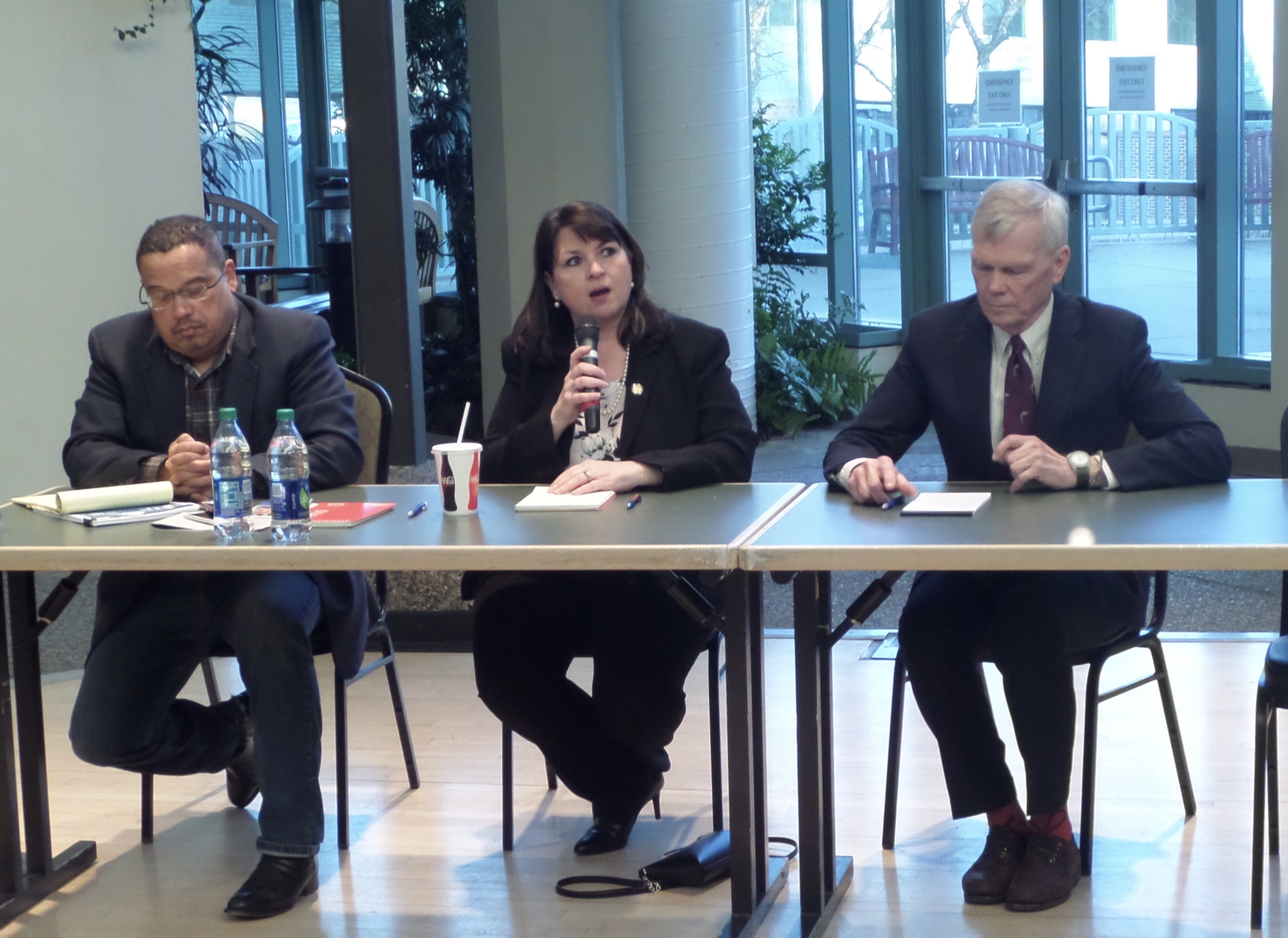 I go to lots of meetings.  I remember a previous meeting some years ago in this exact same space almost exactly ten years ago, April 9, 2009, (link above), called by then-Rep. Michele Bachmann (R).  That meeting was supervised by local police, and open questioning was not allowed.  It was not a welcoming place that night.  Your role was to sit down and shut up and feel privileged that you were even allowed in the place.  There may as well have been a wall between the speakers and the audience….

“What America Looks Like” is up to each and every one of us.  Last night was a good exhibition of this.

POSTNOTE: Moderator Keith Ellison gave all of us an opportunity to speak.  The ground rules: 1) no more than one minute; 2) several persons spoke; then each representative responded to any of the questions which pertained to them; 3) there was another round of questions, handled similarly.  Everything went very crisply.  The meeting was very orderly, ending on time….

Karla asked, after reading: “Dick if you have a minute, please let me know why this forum was so successful.  Speakers. Topics. Citizen participation. Trump.”  Carol, who was at the meeting, also responded:  “I agree!  That was a very good meeting.  I’m quickly gaining respect for Ellison in his new job.”   Probably, Carol and I would have differing reasons for agreeing the meeting was good.  I had a sense that people in the room, generally, felt respectfully included, including those who outed themselves as Republican (which they wouldn’t have had to do).  Even at one somewhat tense moment, discussing “stand your ground” position on gun control, Attorney General Ellison was very respectful in his disagreement with the person who had taken the position.  It was just a good meeting.  I’d like to hear from others who were actually there.  And from anyone who was at the April 9, 2009, meeting referred to above.

For Peacemakers… A Peace of My Mind
Scroll to top