PRE-NOTE: I pre-plan most posts, this one, days before news came about the collapse of the building in Miami where over 100 persons are still missing, and the death toll rising.  My thoughts and prayers are with all of those impacted by this tragedy.  I can’t help but think back to the Haiti earthquake of January 12, 2010, where over 200,000 died.  I had been to Haiti in 2003 and 2006, so I directly connected with that tragedy.  We are all one community.  Let’s not forget that.

Recently, sorting through old photos left by my Dad, I came across this: 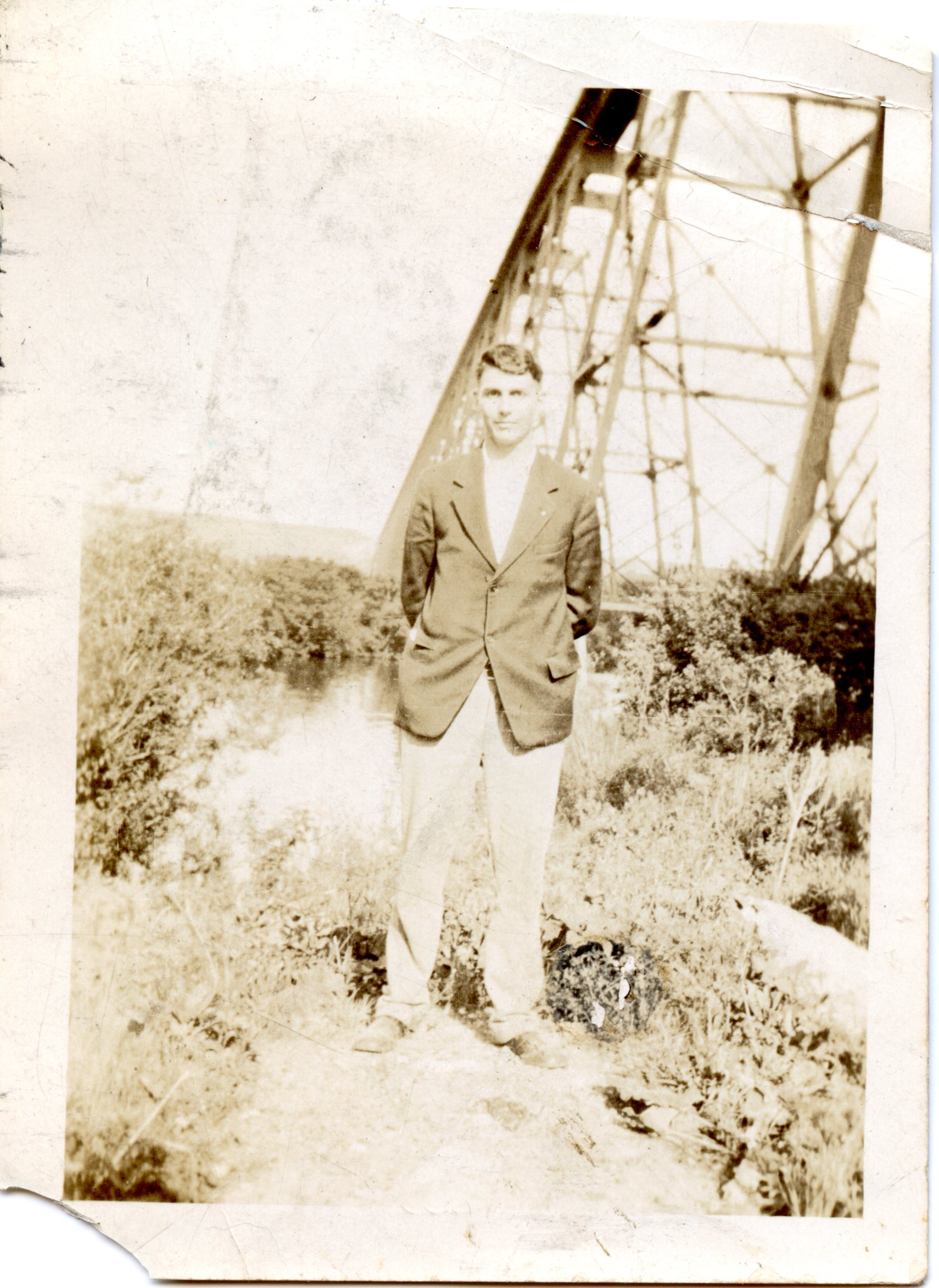 You have to have been there to know where this photo was taken.  Dad was basically under the iconic highline railroad bridge in Valley City ND.  The photo shows he was at the bank of the Sheyenne River.  Here’s the google map.  You should be able to clearly see the highline.  I’m guessing they were on the west side of the river.

The photo is unlabeled.   I fix it as early in the 1930s, taken by my Mom, Esther, sometime after they first met.   They were both country school teachers, and in those days those teachers would come to summer school to earn credits towards a full teaching credential.  Dad’s friend, John, and Mom’s sister, Lucina, seem to have been facilitators. Dad takes it from there, in memories he wrote in about 1980, in his early 70s.  “Esther and I did some dating during that summer.  We did a lot of hiking and I think we managed over the period of the summer, to walk up and down the ring of hills that surrounded Valley City.  I remember that Esther was taking a course called WEEDS and, in our wanderings, she picked up various samples for the class.  They were identified and pressed…[after the summer] we lost contact with each other….” (p. 130)

They reconnected, and married in 1937 “till death do us part” when Mom died in 1981.  After two years of teaching in tiny and depression-impoverished Amidon ND, they came back to Valley City where Dad finished his four year degree, and Mom had me.

This was a memoir of an ordinary man making his way in the often de-spiriting years of the 1930s. 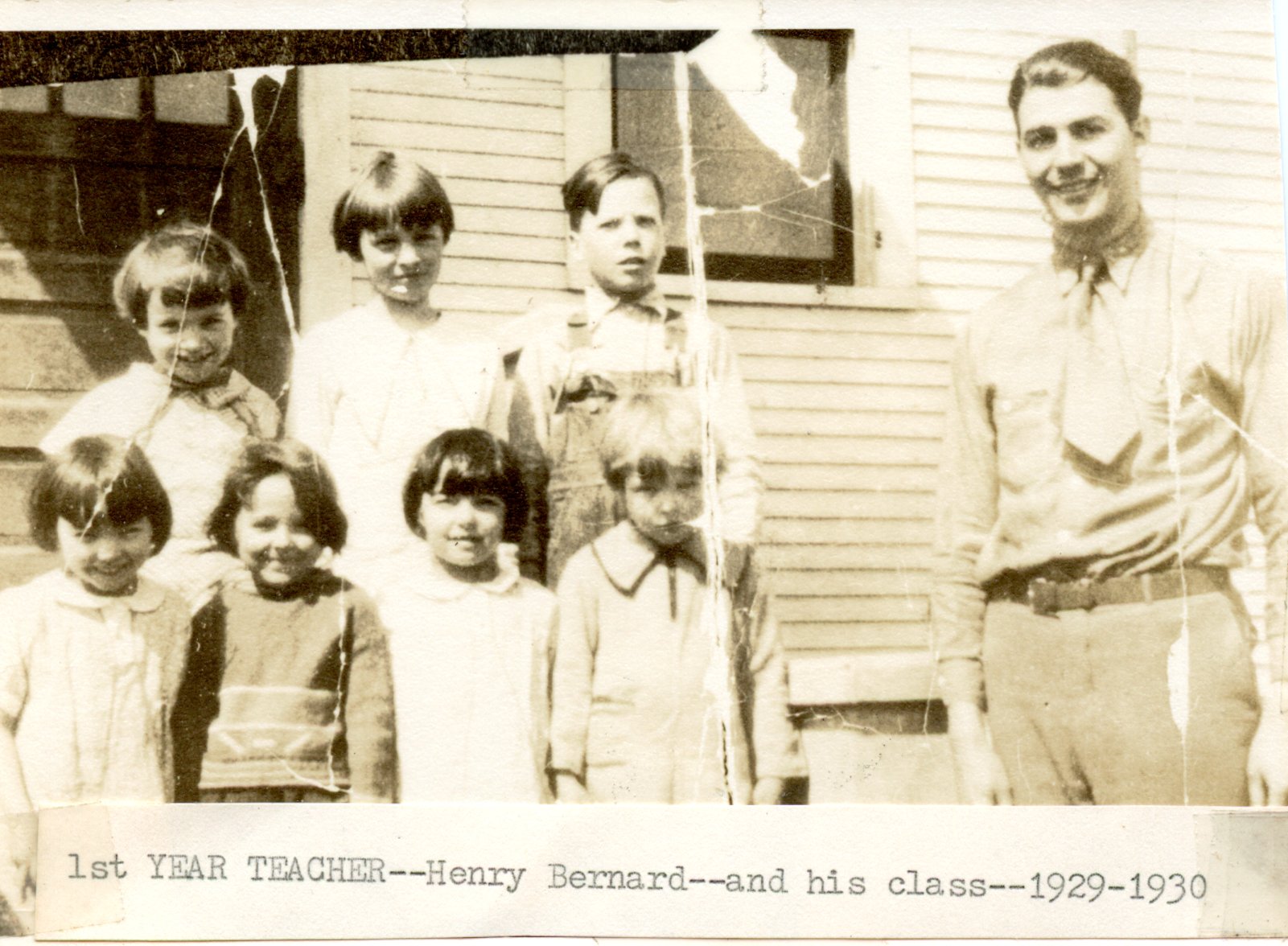 Henry Bernard with students at Allendale #1, 1930.

A legendary Catholic Priest in early Minnesota was Father Joseph Goiffon, a Frenchman whose first assignment was to the Metis in the Pembina River area in what later became North Dakota.

Here’s a photo of young Father Goiffon found in a 1905 History of Anoka County MN by Albert M. Goodrich. 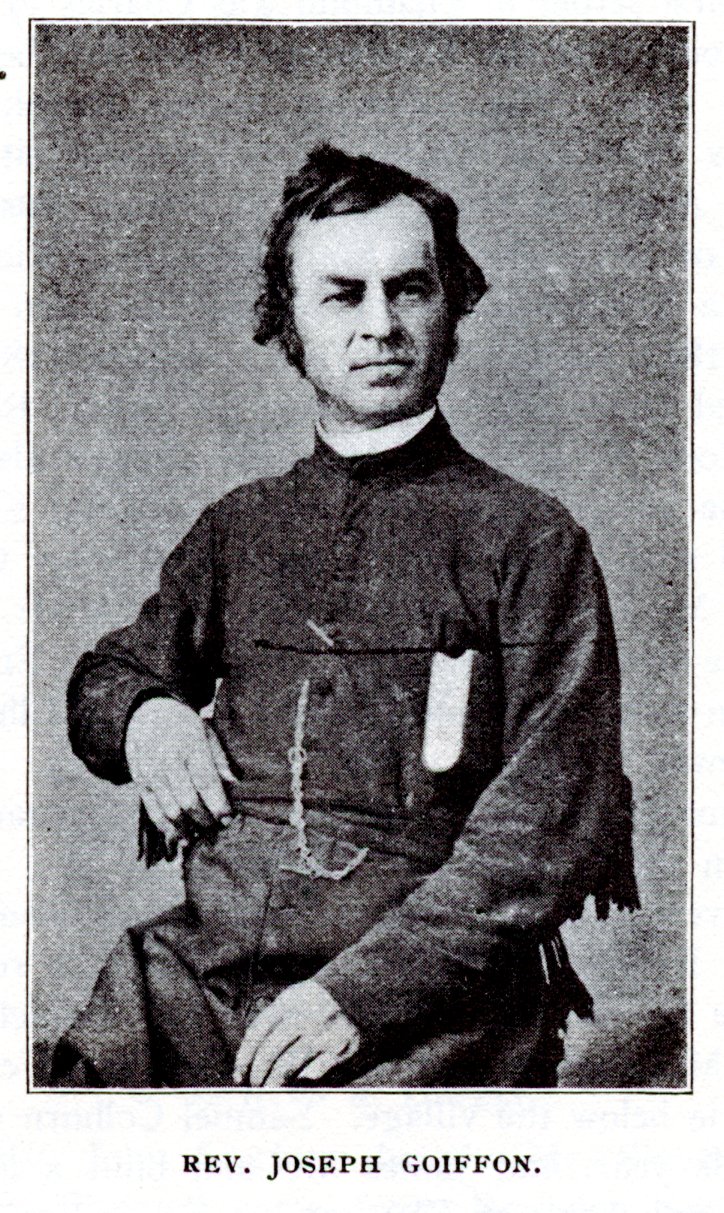 I first ‘met’ Fr. Goiffon about 1991, when a lady gave me a sheaf of papers written by him in the early 1900s, after long career as a Catholic Priest, mostly in the French-Canadian communities of Centerville and Little Canada, Minnesota (1861-91).  The memoirs apparently had been written in French, and translated by Mrs. Charlotte Huot.  Like Dad’s, they were written by someone in his 70s, remembering his own long-ago, and very interesting.

Fr. Goiffon was born in 1824, and arrived in then-Minnesota territory in 1857.  After he retired in 1891, and before his death in 1910, he wrote his memories of being a frontier Priest, in what is now northeast North Dakota.  One of the rich recollections was of an 1860 buffalo hunt with the Metis of Red River, which you can read here (click to enlarge, 9 pages): Goiffon Buffalo Hunt 1860 .  For other ND/Metis stories from the Goiffon memories, here.  Click Library, click Chez Nous and go to index under Goiffon.

POINT TO PONDER: I’m older, now, than either my Dad or the Priest when they wrote their memories.  Over and over I’m reminded that elders do have things to say, and they do make sense!  If you’re elder, write your own memories.  Someone will appreciate them, some day.

The stories have been in my possession for years, hidden in files.  What shook them loose was a conversation with my grandson about the 1987 World Series, which in turn began because  my friend, Kathy, had given me the old newspaper kept intact for years by her mother.  (Photo of the cover below).  I decided to give the paper to Parker, now 19, who is a college baseball player, and our conversation led me to realize that there are places in kids lives for elder memory!  Parker was born 15 years after that World Series, and initially thought that the World Series was at the old Met Stadium, rather than the actual location, the Metrodome.  The newspaper, and google, and my own memories, filled in some blanks for him.  We all have a role in the place of memory for our past, our present and our future. 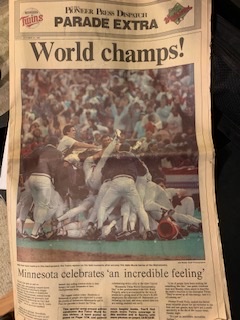