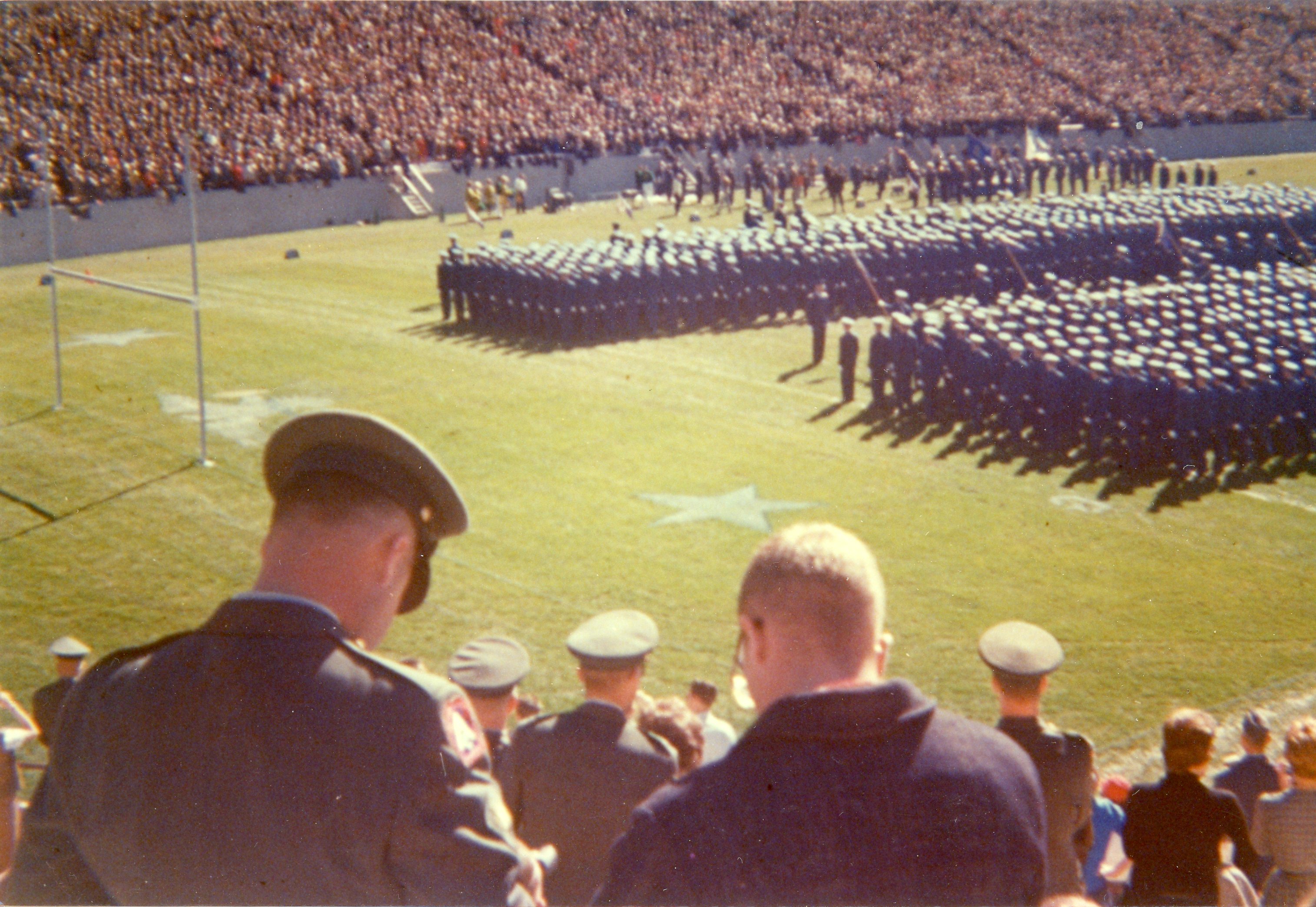 GIs from Ft. Carson at Football Game at US Air Force Academy, 1962. Photo by Dick Bernard

(The Air Force Academy was near brand new at the time, having come to its present Colorado Springs location in 1959.)

This afternoon we were invited to a recognition event at our grandson Spencer’s high school.  Spencer did a deferred enlistment in the U.S. Marines last summer, and when he graduates from high school he prepares to embark for California and basic training.

He and the other recruits to other branches of the service are being recognized this afternoon.  We won’t be going only because Spencer can’t be there: sectional track meet in which he’s a competitor.

But certainly we would have gone: we’re proud of him.

Also, today, Kyong Juhn is nearing the end of her over 300 mile walk from Rochester to Bemidji, re-enacting the walk of her parents from North to South Korea during the Korean conflict.  Her progress is being reported at Facebook page Walk for Hope and Peace, which can be seen here.  I was privileged to meet her early in the walk, on May 10 in Minneapolis, and I wrote about the walk on May 5, here.  Best I know, she stayed overnight the last two evenings with my sister and brother-in-law Flo and Carter in Park Rapids.  In between I think she walked part of the North Country Trail with Flo.  Her walk is scheduled to end on May 25 in Bemidji.   I learned of the walk through a group I’ve long been part of: Veterans for Peace Ch 27.   VFP provided the “sag wagon” for Kyong’s long walk. 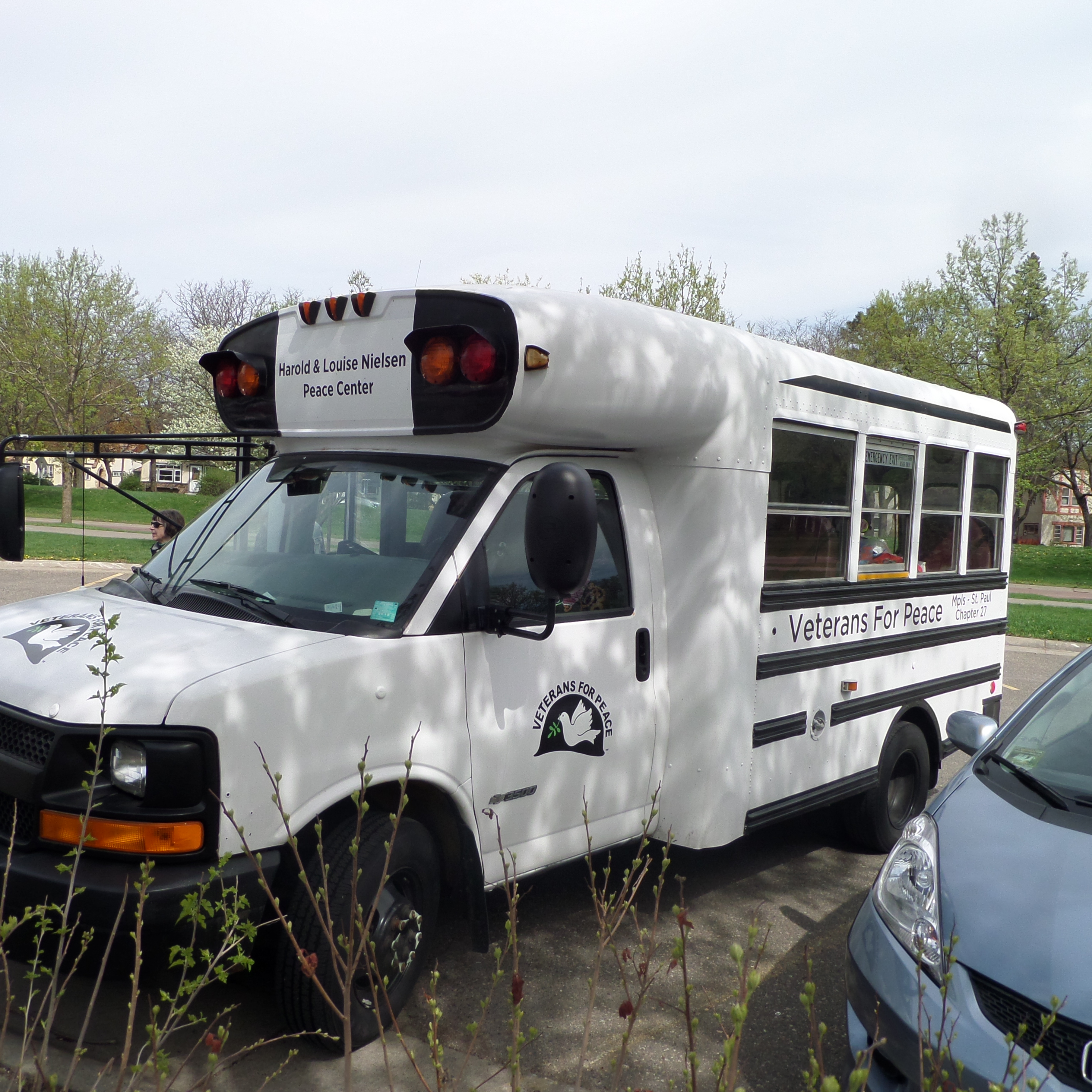 Talking about “heroes” and “patriotism” is not always an easy issue.

Personally, I belong to the American Legion and to the Veterans for Peace.  My clear preference is the ‘no war’ stand of the Vets for Peace, but it is complicated.  For me, now deceased Native American author Jim Northrup caught war best in a 2014 video I’m proud to have facilitated.  You can watch it here.  It’s the sixth video, Veterans for Peace, and Jim begins at 6:50 and continues for about 19 minutes.

Personally, I served in the Army, 1962-63.  I volunteered for the draft since that was almost a certain destination anyway.  I was a new college graduate.  Once I asked a brother, why did he join the Air Force (both kid brothers are retired Air Force Officers).  He said, “because you said anything but the Army”!  Well, perhaps I said that.  I saw him right after basic training.

But I never bad mouth the military.  For many of us it was basic training for life.  It is how the military can be and has been misused over time that is the big problem.  Who is commander-in-chief makes a huge difference.

I have briefed Spencer on what’s ahead in Basic Training.  It will be interesting to hear him talk about when he comes home on leave.  No doubt he’ll have changed….

Then, there is the other side of the story, and on Saturday, it will play out at West Point where the Commander in Chief gives the graduation address.  A commentary about that upcoming event is here.   “Duty, Honor, Country” is well worth the time to read.

Have a good Memorial Day Weekend.  Memorial Day I will be where I always am: at the Veterans for Peace Commemoration at the Vietnam Memorial on the Minnesota Capitol Grounds.

Pope Francis A Man of His Word SAK, My Great Friend from England, Observes US at Memorial Day
Scroll to top