This morning, Monday May 31, 2021, at 9:30 on the Minnesota State Capitol grounds, at the Vietnam Memorial, will be the annual Veterans for Peace observance of Memorial Day.  Except for last year, when the Pandemic made it a virtual event, it has been at the same site for almost all of the 18 years I’ve known about it.  I rarely miss it.  I’ll be there again this year.  All are welcome.  It is always meaning-filled.

The last year, particular beginning with the Pandemic, have seared us all.

This year my focus on this day is the contents of a single page piece of mail I received from my friend Padre Johnson on May 23.  Here it is in pdf form padre johnson philosophy, below in jpeg.  It is shared with his permission. 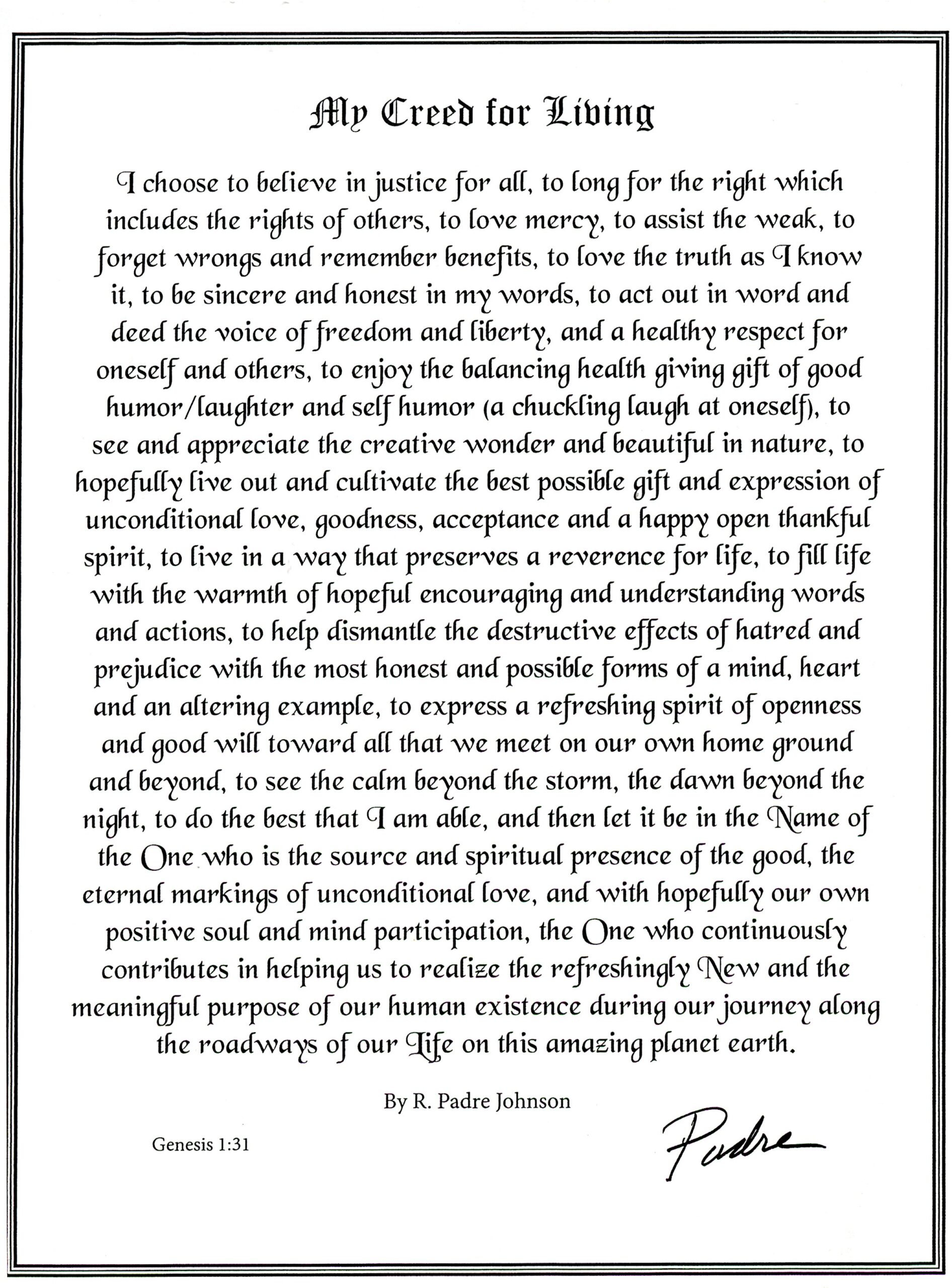 I’ve known Padre for more than a dozen years.  He’s my senior by a couple of years.  This one page creed is a single sentence, every phrase within food for personal thought by myself…and anyone.  He lives this creed.

A descriptor of Padre’s amazing career from 1992 is summarized here: Padre Johnson 20200304_12272801.  In specific context with today, here’s the portion about his service in the U.S. military: “…he was officially assigned for the first time in American military history to serve in an independent duty position as both the chaplain and in a leading field medical officer position with his Black Beret “River Raider” Assault force One Special Forces unit in Vietnam’s Mekong Delta Region.  For his many successful life saving medical rescue mission efforts under some of the most impossible combat situations during which he was twice wounded in two separate battles he was very highly decorated with two Silver Stars, the Legion of merit with Valor, the Bronze Star, the Vietnamese Cross and two Purple Hearts – becoming one of the highest decorated chaplains and medical officers in the history of the U.S. military.”

Here is the front cover of the book which includes the above descriptor:  Over a period of about 13 years, Padre spent significant time with people in 149 countries and all U.S. states.  The resulting art, by Padre, became a major exhibition at the United Nations in New York in 1992. 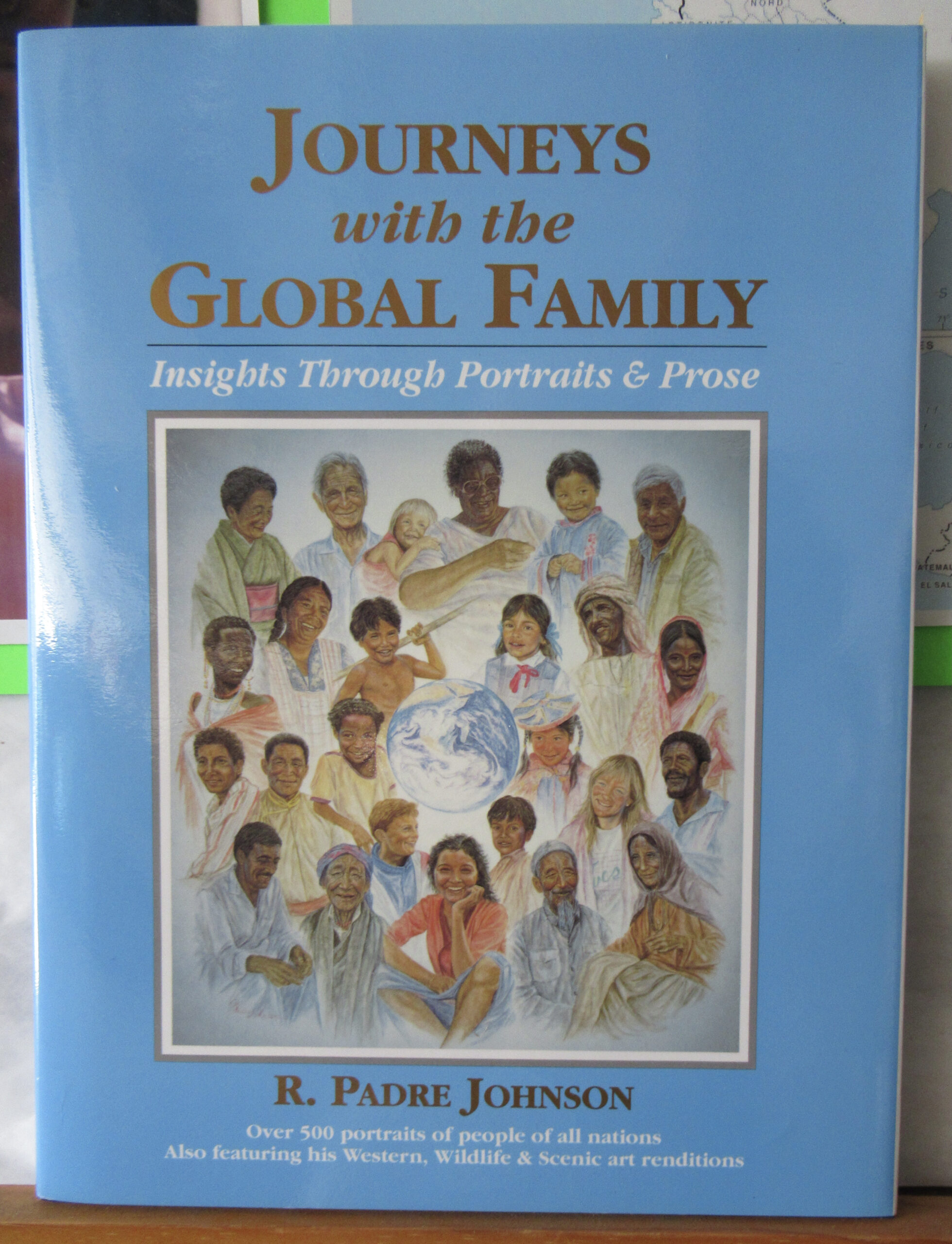 Let there be peace within ourselves, our families, our neighborhood,our communities, our countries, our world.

POSTNOTE: I also want to call attention to another gift, received recently from my friend and peace activist, David Logsdon, former President of VFP27.

POSTNOTE 2, after The Vets for Peace gathering:  Memorial Day is complicated, granted.  It is a day to remember those who died in service to or country.  But is is also good day to party and celebrate, etc. etc.  We watched the annual PBS Memorial Day Concert last night.  The emphasis was again on 9-11-01 and foreign wars, nary a mention of domestic in-tranquility, like Jan. 6, 2021.  We are a nation badly divided.

It is as it is.  I was at the annual event of Vets for Peace.  It is my tradition.  It was nice as always.  Beautiful weather.  There were about 100 of us, which is pretty usual.  Mostly the folks who have organized it for years are Vietnam Vets, not high on war, certainly.

Behind the speakers was the Minnesota Vietnam memorial wall.  I noted that the first Minnesota Vietnam deaths were 1962 – the first of my two Army years.  The worst year was 1968, sandwiched between 1967 and 1969 – the second and third worst.  One brother began with F-105s in 1967, if I remember correctly; My kid brother graduated from University in 1970, off to war, both of them were Air Force officers.
Our chair today, Barry, mentioned the three classmates of his killed in ’Nam, one of them among thirteen GIs blown up when a load of ammunition went up, how that happened unreported.  But these are the kinds of things that get remembered by warriors.
Several on todays program were Native American veterans: drummers and spoken word.  “Indians” in my experience are very patriotic.
My barber was a Marine in Vietnam.  He had close calls, but came home in one piece.  Every patrol was uneventful, until it wasn’t.  No one knew when or exactly where disaster would strike.  His kid brother followed him into the Marines, as my barber had followed his older brother.  His younger brother, Joseph, was killed in ’Nam less than a year into his enlistment.  His name is on the wall, in the group that is 1968. 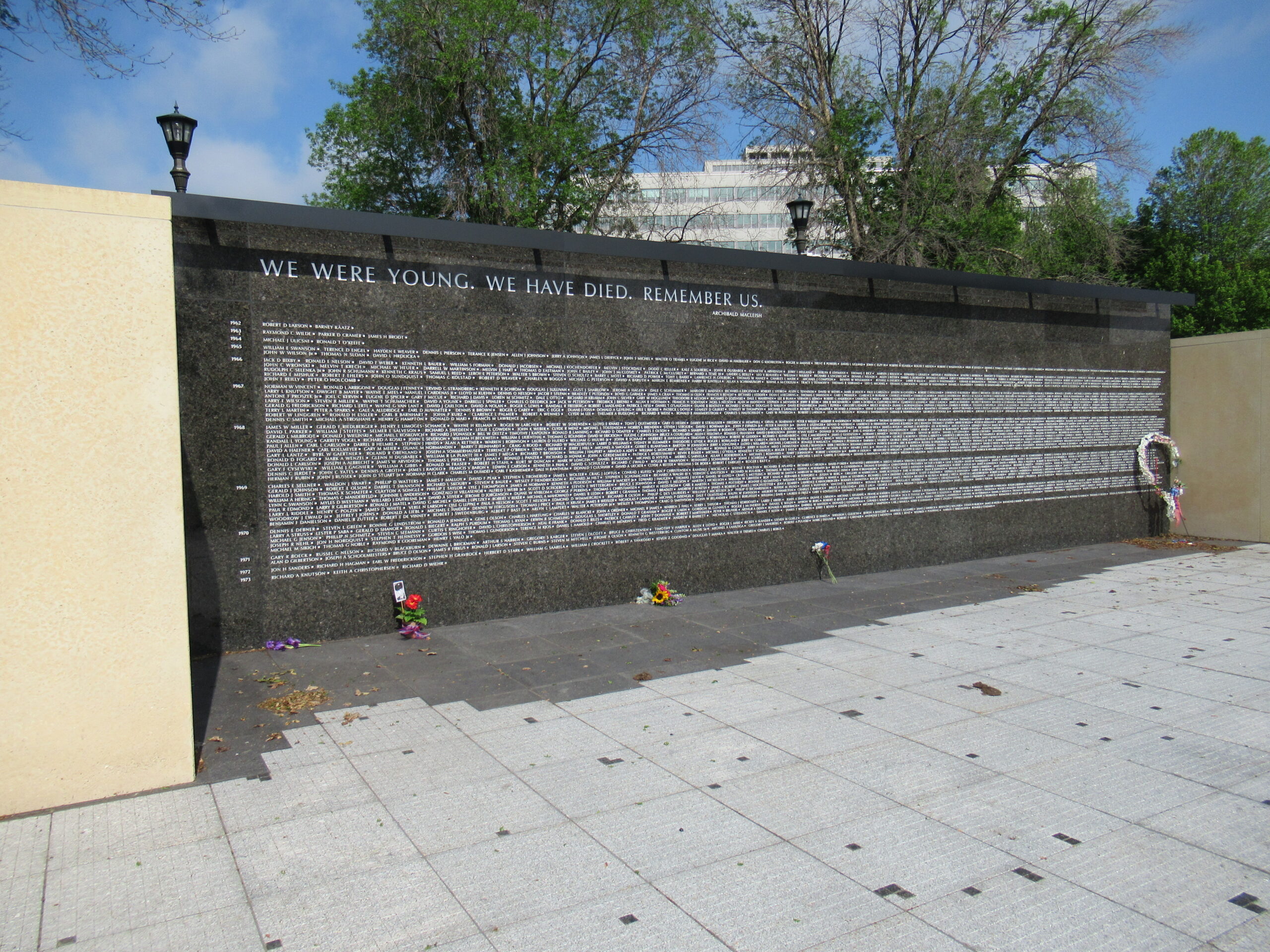 from Judy: A Blessed Memorial Day to you Dick who always remembers

with respect and affection those who have graced his life.
from Steve: The piece from Padre Johnson is a brave expression of human intention, reason and faith. Thanks for sending it along. The Memorial Day event in Woodbury was lovely–well planned by theVFW, touching, and very personal. The  high school honor guard was proud, the Civil War reenactors were impressive, the speaker was ins[irational, and they had a great crowd.
https://thoughtstowardsabetterworld.org/wp-content/uploads/2022/04/thoughts-300x138-1.jpg 0 0 dickbernard https://thoughtstowardsabetterworld.org/wp-content/uploads/2022/04/thoughts-300x138-1.jpg dickbernard2021-05-31 06:42:222021-06-01 06:35:21Memorial Day 2021
2 replies