50 years ago, March 5, 1968 – it was a Tuesday – the Hennepin County Board of Commissioners adopted “A Declaration of World Citizenship”. Three days later, on March 8, the Mayor and City Council of Minneapolis adopted the same Declaration. Less than two months later, on May 1, 1968, a large contingent of suburban Minneapolis mayors, as well as a who’s who of the political and civic leaders of the time, participated in a flag raising at what was to become Hennepin County Plaza.

The actual resolution is here: (click to enlarge, double-click for more) 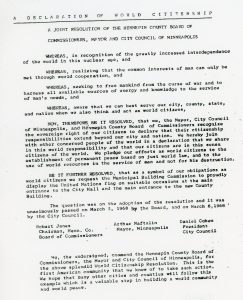 Declaration of World Citizenship March 5 and 8, 1968, adopted by Hennepin County and the City of Minneapolis.

Details about the events can be read at pages 3-10 here: MN Declarations Mar 18003. (The other pages describe several other significant and analogous events, and you see names like Richard Nixon, and Lyndon Johnson….)

50 years later, today, we’re a country in turmoil, possibly about to see the beginning of a trade war, where positive relationships between parties are a dim memory, and our country is in a state of acute dysfunction. “We, the people” elected the leaders 50 years ago and in more recent times. What has happened to us?

1968 was a worried time, of course. Everyone with access should take time to view the exhibit “1968” at the Minnesota History Center this year.

Still, the narrative in Minnesota, then, and other places was much as it was after World War II. We needed to figure out how to get along. War was a waste.

1968 now seems to have been such a quaint time. 2018 by contrast seems in so many ways so bizarre.

Getting to the Declaration in 1968 took citizen work. It was a years long process started by two Minneapolis businessmen, who in 1963 had seen in person the Tokyo government declare itself a World Citizen City. Tokyo in turn had followed the example of other cities, who had “mundialized”. Lynn Elling, one of the leaders, many years later recalled to me that when they took their idea to then-Minneapolis Mayor Arthur Naftalin, his first response was “what the hell is mundialization?” (See it described at the link.)

Of course, each declaration fit each communities circumstances. In Minneapolis/Hennepin County, 1968, the culminating event included raising the United Nations flag beside the American flag, fully in compliance with the U.S. Flag Code. Former Governor Elmer L. Andersen (Republican) gave what he considered one of his most important speeches that day. (page 6-7 at MN Declarations Mar 18003)

The most important subsequent events occurred in 1971 when Minnesota declared itself a World Citizenship State.

All were not happy campers, of course. Mayor Naftalins archive included 16 letters from citizens, 13 of them distinctly anti-United Nations; all but three of them from other states. The protests were vigorous, but hardly overwhelming.

The UN Flag flew at Hennepin Government Center for 44 years, until it was unceremoniously removed by the Hennepin Board of Commissioners March 27, 2012. They could, of course, fly any flag they wanted, but their excuse for taking down the flag – violation of the U.S. flag code – was false, and to this day I am not certain the chain of events which led to the flags demise (though I have some pretty clear ideas, I will not share since my opinions would likely be denied.) Four of the current Hennepin Commissioners were among those voting to take down the flag six years ago. They would know the story.

Two lengthy blog posts remain as a “file cabinet” for this issue, for anyone interested, here and here.

“We, the people”, in our democracy, have a huge responsibility: to elect those who serve us.

If we don’t like what we see from our government leaders at any level, we need first to look at ourselves – were we cause in the matter for change?

There exists today an international organization called Mayors for Peace. Take a look.

(3) Our National Insanity A Political Endorsing Convention: On Showing Up.
Scroll to top