Saturday was a very long, exhausting, yet energizing day at the DFL Senate District 53 Convention in Woodbury MN. The final credentials committee report showed 233 registered delegates. By the time we adjourned at 7 p.m. We had endorsed candidates for two state legislative seats, passed 36 resolutions, and elected 18 persons to represent our area at the upcoming Congressional District and State DFL political conventions.

The candidates vying for endorsement for DFL District 53A legislative seat, Greta, Tou, and Lila, Mar. 10, 2018.

“Politics” is easy to criticize, of course, and it is work to show up, to run for office, to even warm a chair for a long day indoors, where people argue about stuff, like procedures, and on and on. Thank goodness for those who show up, and persevere!

For the DFL (Democrats) this convention began with the Precinct Caucus in early February. I wrote about that meeting here. Of course, it began before the caucus, when volunteers did the necessary groundwork. “Showing up” doesn’t begin and end on election day.

In my Legislative District, we were blessed, truly, with three outstanding young people, all of whom decided to stand for nomination. They are pictured above. In the end – it took four ballots – Tou Xiong prevailed. He, and those who have preceded him running for any public office, know what is ahead. Getting elected is not a spectator sport.

I am gratified, truly gratified, that young people came forth to stand for office. It is their future, after all.

What I – We – can (and must do) is to provide support in the many ways that we can. No candidate is perfect, especially in this complex present day world.

I looked around the auditorium where we gathered, and there was, this time, what appeared to be a much larger than usual contingent of younger people, representing the diversity of this community.

Towards the end of the day we engaged in the time-tested process of selecting the 18 delegates to the next level – the sub-caucuses representing certain candidates or issues. I picked one, and one photo I took of the group more or less defined how I saw the folks who were at our Convention: 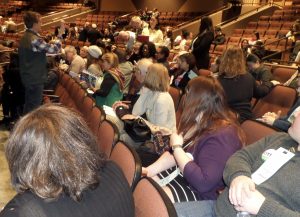 In my opinion, success involved lots of work and lots of cooperation.

We are in a society, now, where individualism and competition and winners are valued, and “losers” are discarded or dismissed.

Together we succeed. That’s the long and short…as I see it.

Thanks, Tou, Lila and Greta, for showing up!