Today is the last hurrah for John McCain.  I won’t review what has already been on the tube, in the papers and on the internet.  Among many such weeks in the past two years, the week just passed has been an exceedingly odd one, politically.

I’m reminded today of ten years ago – September 1, 2008, which happened to be Labor Day.  If you’re on Facebook, there is an album of 120 photographs I took during that week, click here.

2008, especially September, is not remembered fondly by many.   Our country was very near economic collapse.  Then-President George W. Bush did not even come to the 2008 Republican Convention.

Labor Day 2008, St. Paul was militarized to an absurd degree, thanks to the extremely aggressive Ramsey county sheriff.  I heard of a very few skirmishes here and there, some rare vandalism.  But one could not be sure, even then, if one or more of these incidents had been provoked, or even carried out,  by elements in the protest suppression cadre – so-called ‘agents provacateurs‘.

I was part of the very successful Peace Island Conference.  It was so peaceful that it was not newsworthy.  Even those on the ‘left’ who were covering events preferred more ‘action’ elsewhere in St. Paul.

Sadly, peace does not sell papers, attract viewers, or advertisers.  Violence and mayhem does.

In the photos is a gunboat on the Mississippi.   Not in the photos but memorable  was an intimidating line of unmarked vehicles which slowly and conspicuously passed by those of us on Harriet Island.

Circus over, the St. Paul convention tent was taken down and off the Republicans went, led by Mr. McCain and one Sarah Palin.

I’ve watched how an assortment of people have summarized John McCain this week.

For me, John McCain departs as a class act, unfortunately part of a vanishing breed of old-school Republicans.  Some poll of declared Republicans this week showed that 88% approve of Trumps performance; 35% of McCains.  Those numbers are astonishing, yet indicative of where we are presently, as a country.

I’m not of McCains brand, but I think he was a decent person, a contributor to a better world.

I was at part of the Veterans for Peace conference in St. Paul a week ago, and my favorite photo is this one, worn by a participant. 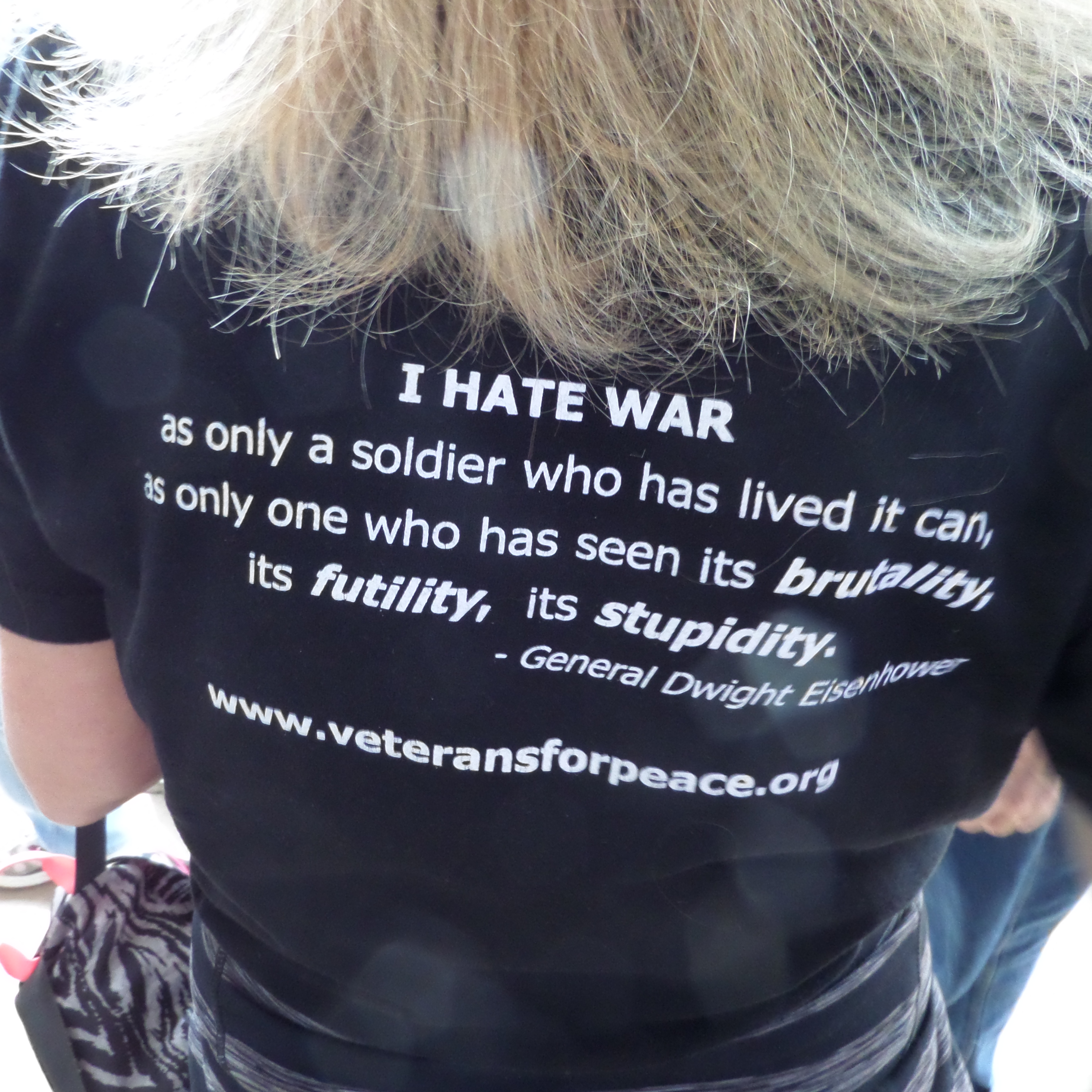 In our society, too many of us  seem to like to pick and choose the ways to glorify, or assassinate, friend or enemy, domestic or foreign makes no difference.  We seem more comfortable being against, than for….  We choose ‘war’ over ‘peace’.

My friends know where I stand on war and peace, and I would not stand in solidarity with Mr. McCain on many issues.

On the other hand, in a democracy such as ours (theoretically, at this point in our history), our lawmakers are chosen in free elections by the body politic – at local, state, national levels.  And anyone of us who lives in any kind of community knows that we do not all think alike, leaving our leaders in a quandary.  In the smallest of units, compromises and accommodations are essential for a civil society to survive.

(We live in a 96-unit, 24 building neighborhood with a homeowners association, and rules.  Even we need “laws” and “taxes” (dues) for the common good of our residents.  We do not always agree on everything.  Civil society is built on compromise.)

Bottom line, for me, is that as McCain completed his life, he was more than anything else a decent individual who made a significant and positive contribution to his nation.  He apparently knew relationships in his state pretty well.  His was a ‘safe’ seat.

No doubt John McCain made lots of mistakes in life – but don’t we all?

But he also took risks which most politicians would not dare to take – most notable for me was the very public rebuke of a citizen in a neighboring suburb of mine who, in 2008,  a person certain that Barack Obama – McCains competitor – was an Arab or worse: an enemy.

He could have let that act of stupidity go.  He chose to confront it, publicly.

He is at peace; the work is left with us.

“We must be the change we wish to see in the world.”  Gandhi

COMMENTS (see also Word Press comments at the end of these comments):

from Bruce: I don’t think John McCain would be caught dead with the above T-shirt on. He never saw a war he didn’t like in my opinion.

Response from Dick: I have no disagreement with you. War was central to his family history, of course. As it is central to many in this country. (One of Eisenhower’s trusted aides in his first term, especially, was Harold Stassen, former Minnesota Governor and one of the original signers of the UN Charter.) Many opinions make up the U.S. We are in a dangerous time when there is a war to control the conversation. I hope we survive this war. I think McCain is trying to send a similar message in his memorial service, in progress as I write. Thanks for comment.

from Fred:  Nice piece about McCain. I was particularly interested in your experiences as a protestor during the 2008 GOP convention in St. Paul. As an interested armchair bystander, I found the circus in downtown disturbing. There were shadings of the 1968 Chicago and Democratic Convention, but thankfully the St. Paul episode was minor in comparison. Of course, you were on the ground and might have a different opinion.  Very appropriately, you pictured Eisenhower’s great anti-war quote, one of my personal favorites, on a protestor’s t-shirt.

from Barbara: Kudos!  And with that rebuke McCain chose to speak to the person, not the camera, as Amy Goodman supposed he ought.  Did you hear the commentator on his 106 year old mother in the Rotunda ceremony? When she tried to rent a car in France at age 91 she was refused as too old.  So she bought one, drove it on her trip. Shipped it back – drove it home across the U.S.!

from JP: Like you I thought that John McCain was a good and a great American.