This post is really about Ukraine, and Kurdistan (not a country)….

First, here is the geographical environment (pdf is a map of the larger region surrounding Ukraine): Ukraine area.  Ukraine is slightly smaller than Texas, and 47th largest country in the world.  The map is the National Geographic Atlas of the World, 7th Edition, 1999, Plate 90 (Asia) and is modified only by the high-lighting of certain names and boundaries. 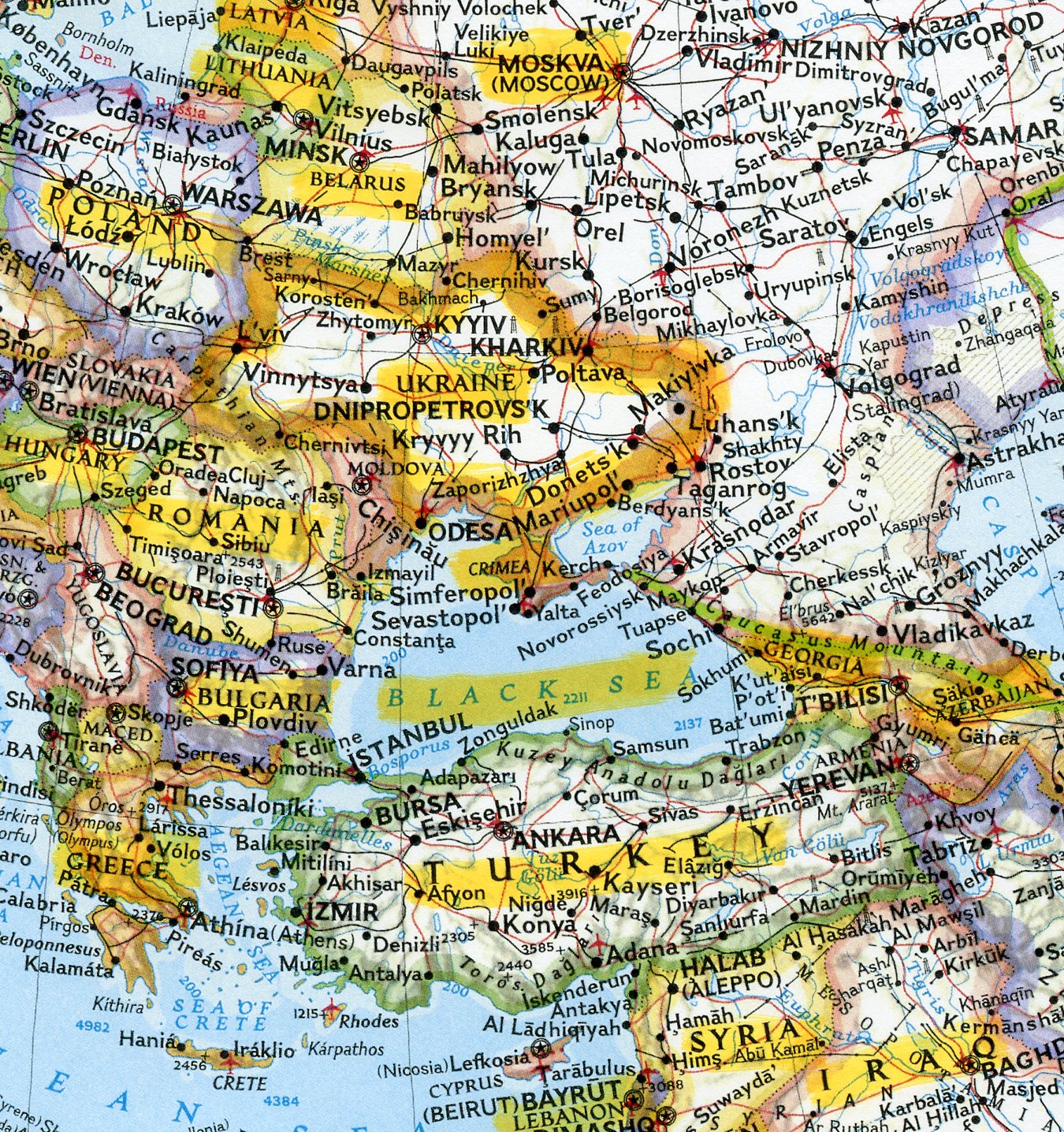 Kurdistan (there is no such country, but possibly there should have been, or should be) is worth knowing more about.  Here is the wikipedia article about the region called Kurdistan.

My friend since 8th grade in rural North Dakota traces his ancestry back to the border area of today’s Syria and Lebanon, and identifies himself as Syrian.  His ancestors migrated from this area in the early 1900s when the Ottoman Turks controlled the area and people like his ancestors were subject to conscription.

My friend is very knowledgeable about this region and its history.  Like me, he is an ordinary citizen.  Unlike me, he knows the history here very well.  This summer he sent me a couple of items worth revisiting: His own writing about ISIS, and a long academic article about Lord Balfours dream.  They can be read here (The Origins of ISIS_Abreviated) and here (Lord Balfour Project Lecture).  Succinctly, the catastrophe (my opinion) that has become the Middle East, began with dividing the spoils of World War I.  For my friend, there is no love lost for the British and for Winston Churchill.

Of course, Turkey (or rather its leaders) has not been especially angelic.  The Ottoman Turks deserve study.  The first genocide (as traditionally defined) was of the Christians of Armenia about 1915.  For Armenian Christians, this memory matches the intensity of memory of the Jews of the Holocaust.  In fact, at this moment at my Church is a photo journalism display of Armenians, which includes announcement of two public programs on October 27 and November 17.  Here is the flier I picked up a week or so ago describing the events: Treasures of Hope001.

When we watch the news and listen to the soundbites about situations such as these, we get only the smallest snippets of information.  Please take the time to familiarize yourself with this crisis.  Personally, I have always found useful the CIA Factbook.  Whatever your feelings about the CIA, its regional analysis is well informed.

POSTNOTE:  Pertinent to this conversation is the fact that large numbers of Americans, particularly in the Dakotas, trace their ancestry to the general area of Ukraine.  In my growing up, these people were referred to as “German Russians”; in more recent years the proper terminology has been “Germans from Russia”.  Their story is relevant to this conversation as well.  There are many internet references.  Here is one from North Dakota State University.  It is from a curriculum for 4th graders so gives the essential facts in an easy to read manner.  Personally, I lived in one community which was, at the time (1951-53) almost entirely “German-Russian”, where the first language was German.  The community was Karlsruhe, in the vicinity of Minot.

POSTNOTE 2:  friend Dave  noted this post and is ethnically related to the group “Germans from Russia” whose ancestors were first welcomed, thence essentially expelled from the area which is now the Ukraine, then the Soviet Union.  He loaned me a book, “The Old God Still Lives” which is all letters from the old country to the new about 1915-23, the period of huge trial.  Access to the Germans from Russia Heritage Collection, the publisher of the book, is here.

from Dave, whose heritage includes German from Russia:  Here is the introduction is a fascinating book he loaned me, of letters from the old country to new North Dakotans ca 1915-25: The Old God…001.  This includes the table of contents and the 5-page introduction.

from Judy: Dick, I watched a DVD last night titled UKRAINE, THE NIRTH OF A NATION.  I wept an was ashamed I have not known this history. From Dick: I think Judy is of Armenian ancestry, and the Armenian genocide is referred to in Treasures of Hope, above.  She mentions the DVD is available from Hennepin County MN Library System.

from Corky: Thanks for sharing Dick. We are in Europe where buildings are many years older than our country. Interesting to note how negotiations over really relevant issues in US can be resolved so quickly. Are these issues of the Kurds really being resolved?

from J.P. from Manitoba: Interesting. as we have visited most of those countries. FYI: Our federal election will be held tomorrow. Unfortunately it is shaping up to be a minority government.  The issue is caused by the Bloc Quebecois,who are pro independent folks and who are tied with the Parti   Quebecois on the provincial level.  We will wait and see what will happen tomorrow [Oct. 21].

from Darleen: Most interesting article on the history of the Germans from Russia (that’s where most of my ancestors fit).

from Larry: Thanks for your blog on Ukraine/Kurds.