Next Thursday is Thanksgiving.

Have a good Thanksgiving.

Consider making your own list of the positives that you can think of in your life, this past and most momentous year.

I have a favorite postcard for this day: 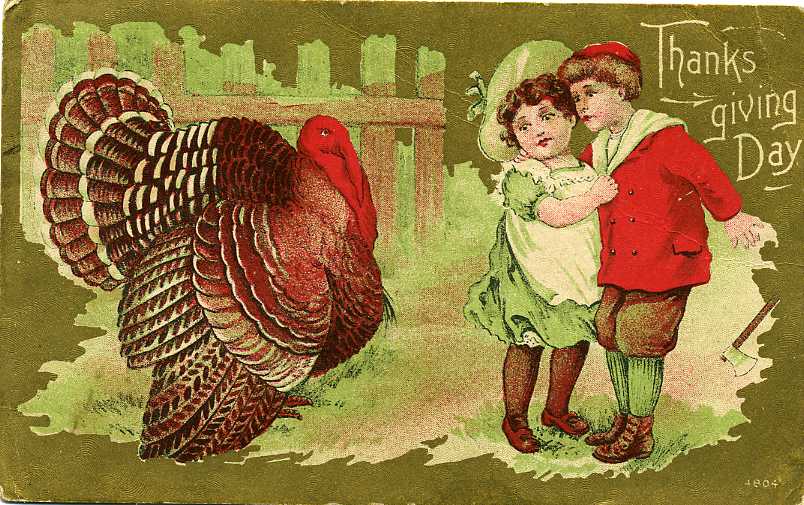 This is part of the Busch farm “collection” – old postcards saved by my grandparents primarily between 1905 and 1915.  They were young farmers on never-plowed land when they arrived in the spring of 1905.  Grandpa was 24, Grandma 21.  “Home” in Wisconsin was about 600 miles away, and they were the first from home to migrate.  Such cards took the edge off of loneliness.  This card seems to have been produced in 1904, and probably sent as an insert with a long letter (Here’s a story I wrote about the postcards in 2006.  Here’s the US Postal Service write-up about this means of communication.)

This Thanksgiving post is almost a week early, for a specific reason.

Yesterday we heard the Minnesota Orchestra and Minnesota Chorale do a wonderful performance of Beethoven’s Symphony No 9 in D minor.  This performance will be live this evening, Friday, Nov. 19, 2021, 8-10 p.m. CST on Minnesota Public Radio (MPR).  Here is the link to MPR.

Here is the program note on the concert both in jpeg and pdf: Beethoven Mn Orch Nov 18 2021. 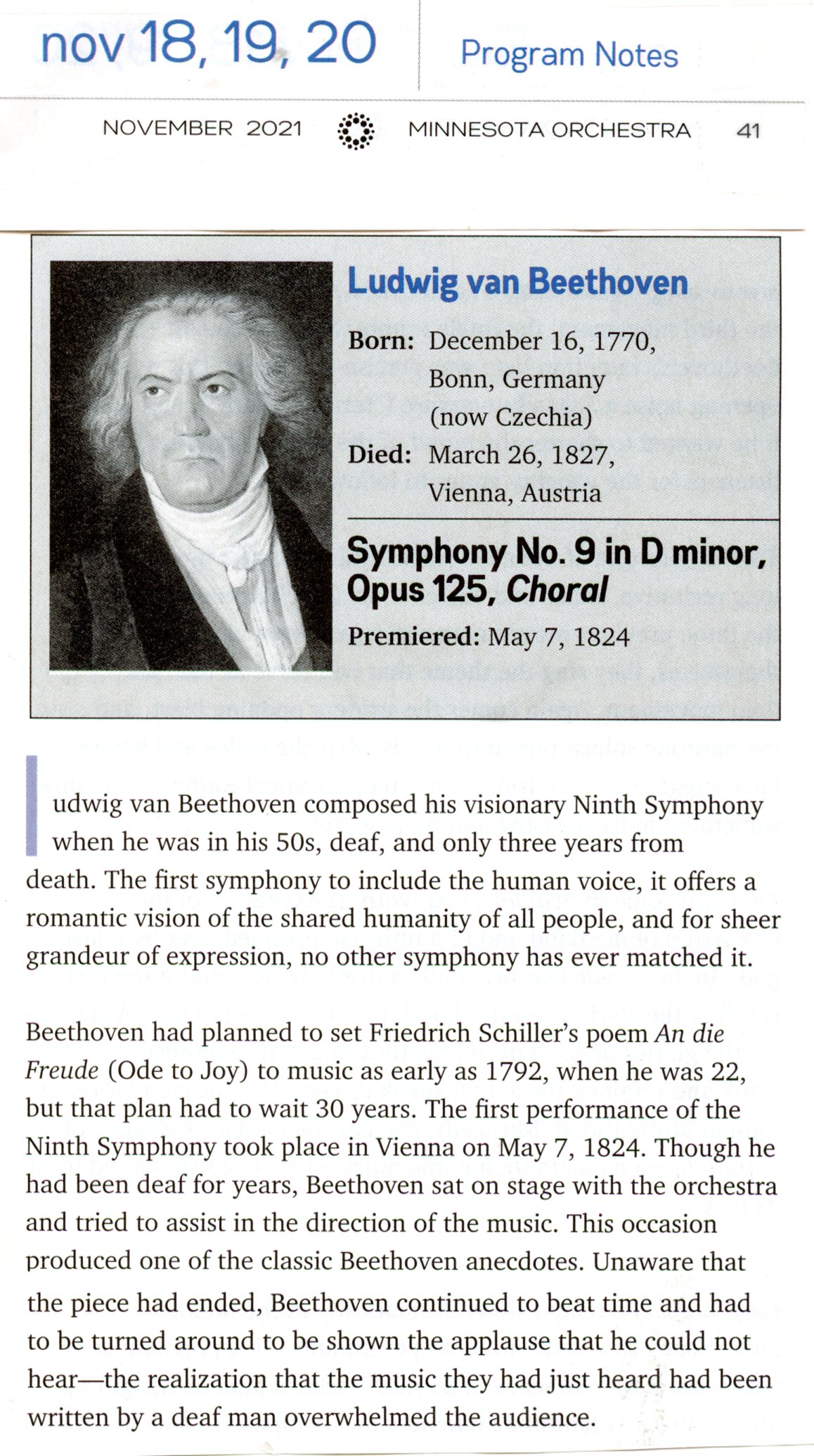 In the live performance, we in the audience saw the English text of Ode to Joy.  Here is the translation from the original German by Friedrich Schiller in 1785.   Here is an article about it.

Joy, beautiful spark of Divinity [or: of gods],
Daughter of Elysium,
We enter, drunk with fire,
Heavenly one, thy sanctuary!
Thy magic binds again
What custom strictly divided;*
All people become brothers,*
Where thy gentle wing abides.

Whoever has succeeded in the great attempt,
To be a friend’s friend,
Whoever has won a lovely woman,
Add his to the jubilation!
Yes, and also whoever has just one soul
To call his own in this world!
And he who never managed it should slink
Weeping from this union!

All creatures drink of joy
At nature’s breasts.
All the Just, all the Evil
Follow her trail of roses.
Kisses she gave us and grapevines,
A friend, proven in death.
Ecstasy was given to the worm
And the cherub stands before God.

Gladly, as His suns fly
through the heavens’ grand plan
Go on, brothers, your way,
Joyful, like a hero to victory.

POSTNOTE: I don’t publicize to my list each post I make.  The Rittenhouse verdict has just been announced, and at the conclusion of my post on Rittenhouse Nov. 15, 2021, I will be posting my own impressions as an individual, but not until a little later today.

from Jeff: The other day I was driving up Cty Rd 5 from my home to the Cub store, the speed limit is45mph.  there is about a 1/2 mile stretch up a hill between lights… and at the end there is a left turn lane at the stop light with a left turn arrow, one that does not turn to yellow flashing because it is a fairly busy interesection (5 and McAndrews).  I was in the left lane knowing I wanted to turn left at the top of the hill, I was going about 48-50, i.e. a bit over the posted limit. A guy in a small black sedan came up behind me and tailgaited for a few seconds, then when he cleared a car in the right lane, shot in there accelerated to 55 or 60 and passed me on the right and got into the left lane. we were both nearing the top of the hill and the turn arrow was red, however no one was coming from the forward traffic and the guy just took his left on the red arrow.

I don’t think I am a cranky old guy who rants about young drivers (i dont know if the driver was young but guess he was the typical 20 something male).  But really since the pandemic I have noted people speeding much higher than 5 or even 10 mph over the limit, and also alot of crazy driving. The type of driving which makes one think those drivers do not believe the rules apply to them. Or the typical rules are made to be broken crowd.  But I think its more.  The insurrection on Jan 6,  unwillingness to sacrifice in the face
of a pandemic over a few mins of mask wearing….ranting and screaming at people in stores , or in school board meetings or council meetings.   And of course outbursts on planes or in airports, and physical violence as well.    Is this just I’m mad as hell and I’m not taking it anymore?
There are apparently a majority of Republicans who believe the 2020 Presidential election was “stolen”.  They apparently dont mind their state and federal representatives glorifying violence or embracing outright violence. They support unfettered right to bear any type of arms it seems.  They see nothing wrong with military like dressed and armed people with semiautomatic guns walking around anywhere.  And of course Kyle Rittenhouse was acquitted by a jury of doing anything wrong in Kenosha.
There is now a precedent being set, that vigilante justice is ok, ok with our legal system, ok with a large part of the population.  And violent language, and threats of violence are become much more normalized.
It all bespeaks a part of the population feeling they are the law, that common sense rules, statutes and regulations  do not bind for them.  They are encouraged to bully and threaten, and even to hunt and kill in the name of self defense, when it is their activity in the first place that creates the situation where they are able to shoot in self defense.
I am gloomy this Thanksgiving and actually I am a dual citizen so I could take my wife and move to Europe.  If I didnt have grandchildren and family here, I would already be doing it. I fear that with a GOP victory in the 2022 mid terms and a change in the House, we will be on the razors edge. I suspect that what used to be the establishment GOP has gotten taken like the German establishment in 1932-33 to the siren song of the neo fascists and nationalists in their party…they will find that they cannot ride the tiger without being eaten.
And this country will likely descend into a confederation of disparate states with very different types of cultures and governments that will not be bound by an overriding Federal govt, because those laws do not apply to “them” in Texas, Mississippi, Idaho, South Dakota.  I truly believe we are headed toward a Hungary type situation here, with the option otherwise a slow burning civil war with violence and mayhem intermittently.
*
Dick responding: We have to adopt a belief that there is a lot of good out there, among ourselves, our neighbors and others we see every day.  The jerks, like the driver (I’ve experienced the same) are certainly out there, but I don’t think they’re any more than a small minority in the whole picture.  If we sit on our hands and do things like not voting at all, we guarantee the results that will bring us to the edge of Nazi Germany and the public attitudes that enabled it – and I agree with Jeff on that fear.  It’s a hard job, but somebody has to do it, and that somebody is all of us.  Just my opinion.
https://thoughtstowardsabetterworld.org/wp-content/uploads/2022/04/thoughts-300x138-1.jpg 0 0 dickbernard https://thoughtstowardsabetterworld.org/wp-content/uploads/2022/04/thoughts-300x138-1.jpg dickbernard2021-11-19 12:43:062021-11-19 16:21:13Giving Thanks.
1 reply