Today is the day of the Presidential Debate.  It is also the 4 month anniversary of the destruction of Minneapolis restaurant Gandhi Mahal by fire.

I last saw Ruhel Islam, owner of Gandhi Mahal, on March 5, 2020, at a fundraiser for Mn Interfaith Power and Light. Ruhel serves on the Board of this organization.  It turned out to be the last group activity we attended as the Covid-19 global pandemic took hold.

Not long before Mar 5, I’d scheduled our 8th annual World Law Day dinner for Gandhi Mahal, as had been the previous seven.  That event, scheduled for April 15, had to be cancelled due to the pandemic.

Everyone can tell similar stories to mine.  Few had their livelihood destroyed as Ruhel did.  I have shared photos and stories art this space several times since May 29.  I have no doubt that Ruhel and his family will recover, but it will take a lot of time.  They are equal to the task.

Most recently, on Sep. 25, I stopped by the restaurant area of 27th and E. Lake Street, in early afternoon.  Each time I’ve been in that area – perhaps 10 times since late May – there has been improvement.

The rubble and ruins which was the restaurant remains, but each time the surrounding area, including the restaurant area, seems to be preparing for future life. 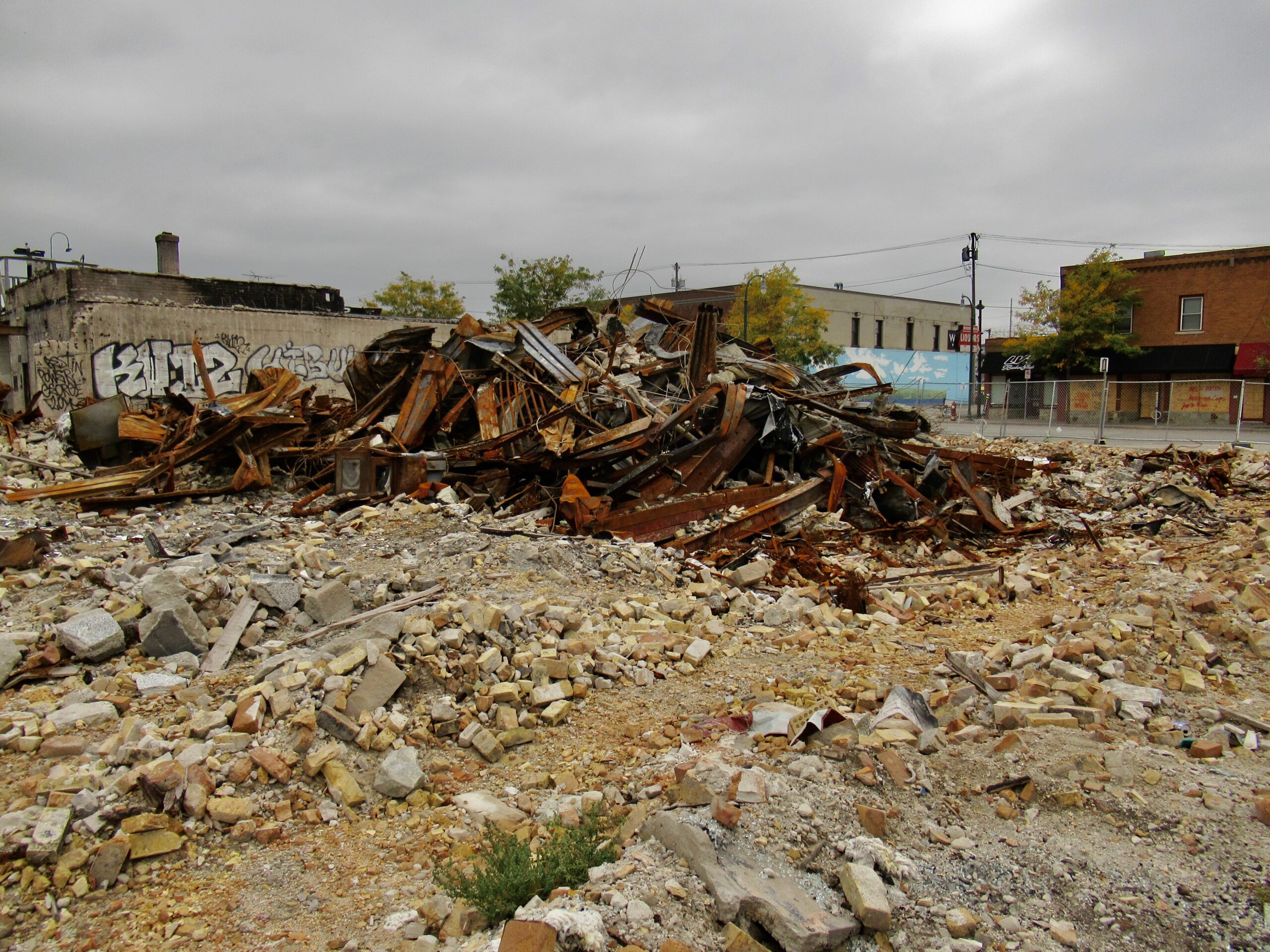 On the last visit, a few days ago, I had a chance to look more closely at the surrounding environment.  The postoffice, a half block from the restaurant and destroyed in the fires of May, was being cleared of debris, and the next trip I assume it will be cleared.

Just behind the restaurant is the East Lake St. Branch of the Minneapolis Library, which has been closed since March because of the pandemic.  It had been  basically ‘guarded’ by fence after May 28.  Friday I could walk up to it.  It appeared to have been undamaged – at least none of the many large windows appeared to have been broken, nor was there evidence of fire, nor has it been in the news.

I’m an ordinary citizen, so I don’t know any more than what I directly observed or have read.  But the same lack of damage appeared to have spared the apartments next to the library, and the church just across the way from the postoffice.

It was the businesses, including the postoffice, in the vicinity of East Lake Street that seemed specifically targeted in the aftermath of May 25, and these businesses have always seemed to cater to residents whose signage is often in languages other than English, etc.  Somebody targeted a neighborhoods infrastructure.

When the carnage began, about May 27, someone in lower town St. Paul identified the groups that would probably be seen in the ensuing protests and cautioned us to not paint with a broad brush people labeled as protestors.  The groups identified were: 1) Activists; 2) Grieving Citizens; 3) Rowdy Idiots; 4) Chaos Agents; 5) Professional Thieves.

Whoever burned Ruhel’s business, and damaged and destroyed others, and why, may never be identified, and if identified and charged, will probably not be charged and tried for many months down the road.  Of two things I am quite certain: Activists and Grieving Citizens were not the culprits; the places to be destroyed were targeted and very likely coordinated.  The investigation will be long-term.

After Minneapolis-St. Paul in late May came other high-lighted places: Seattle, Portland, Kenosha, clearing Lafayette Park …and talk about sending “federal troops”, and enforcing “law and order” in supposedly out of control “Democrat run cities”…and states.

The ball is in all of our courts. 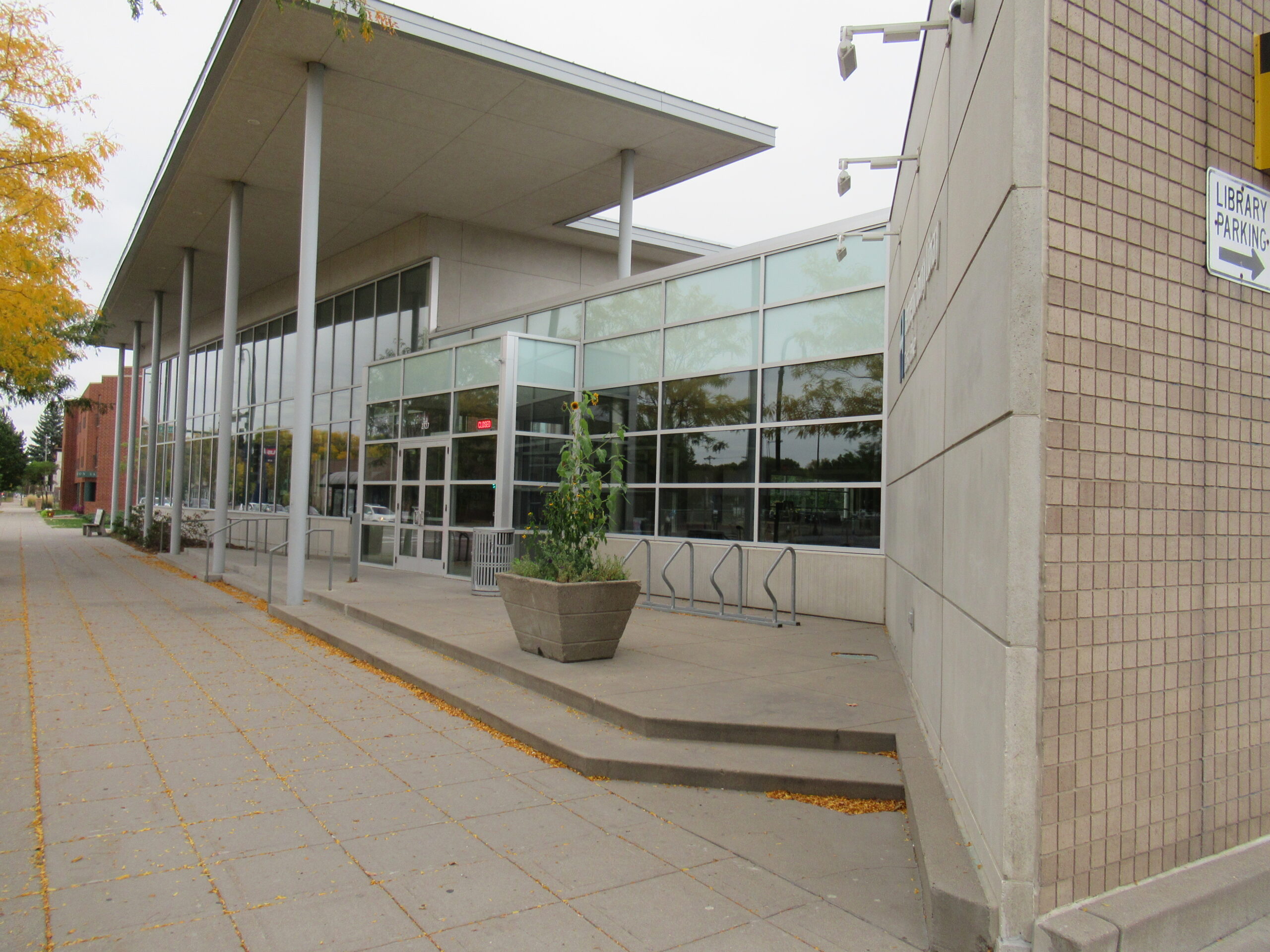 The East Lake Street Minneapolis Public Library Sep 25, 2020, one half block from former Gandhi Mahal restaurant.  I doubt that this building was damaged in the events after May 25. 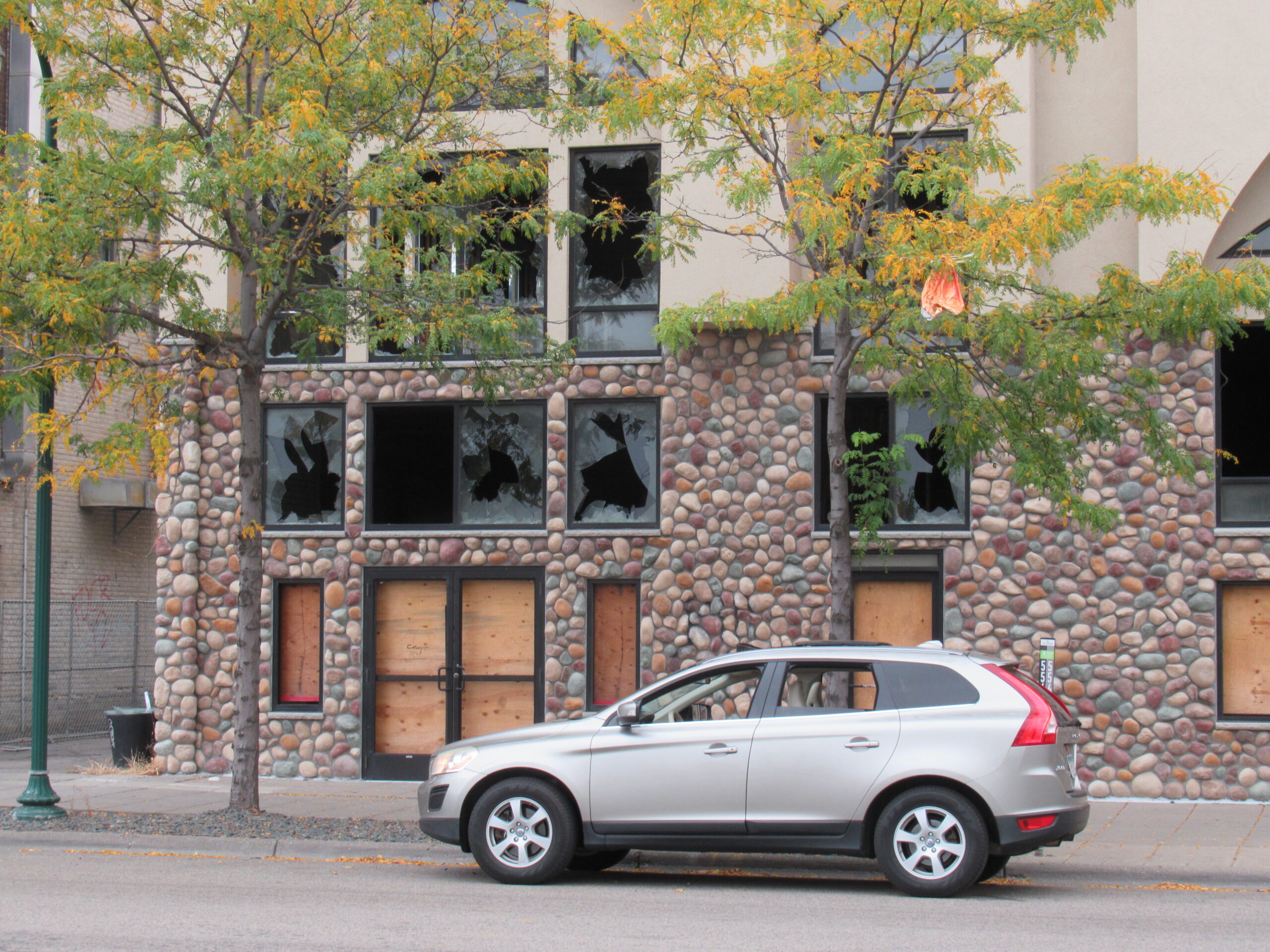 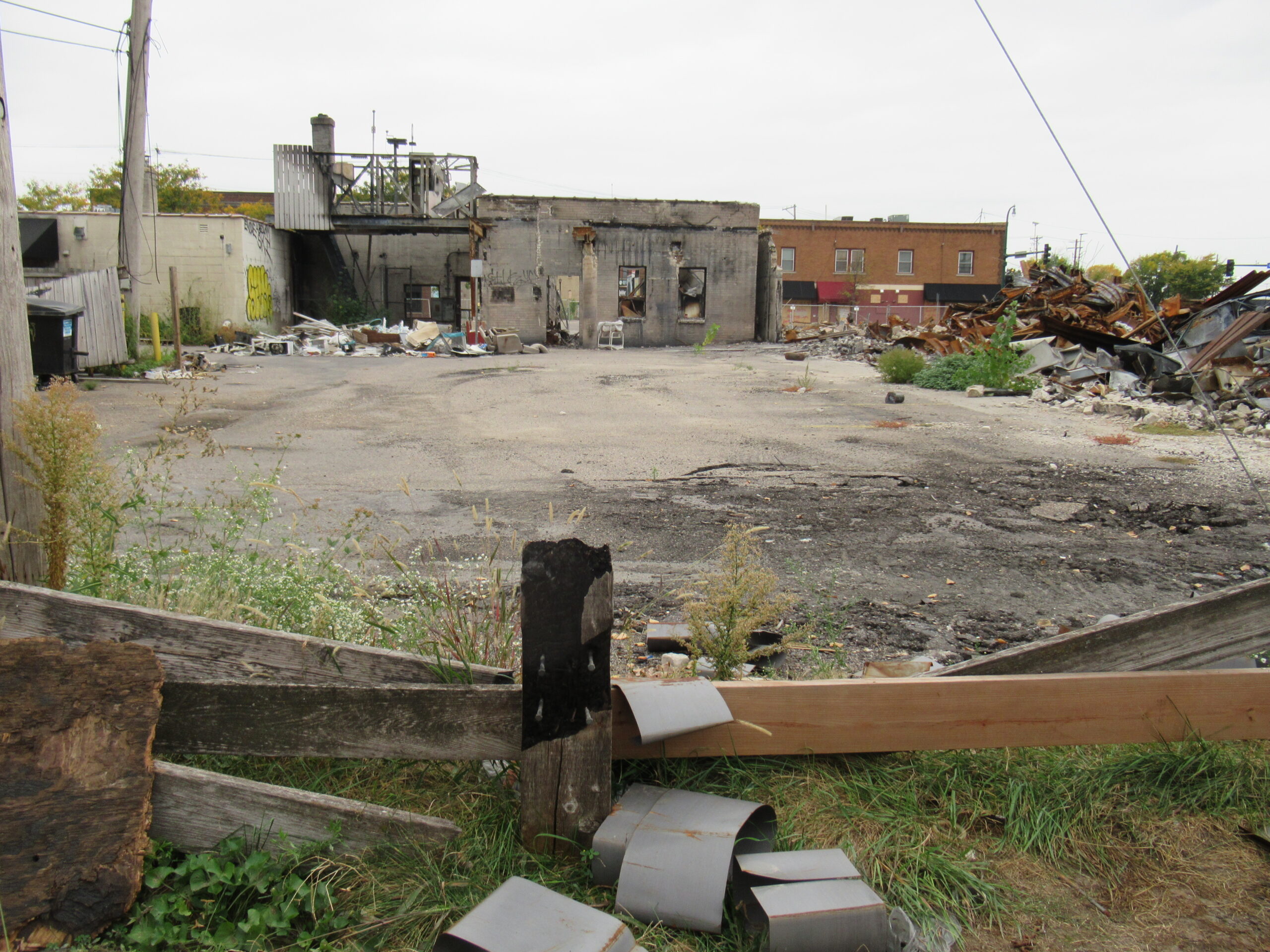 Gandhi Mahal area from the Library, looking west. Sep 25, 2020. The back walls of the restaurant remain standing. One room of the restaurant was not lost in the fire, and the street walls of that single room also stand. The businesses which would have been to the right in this picture all were destroyed, as was the postoffice, which would be off the photo to the left. 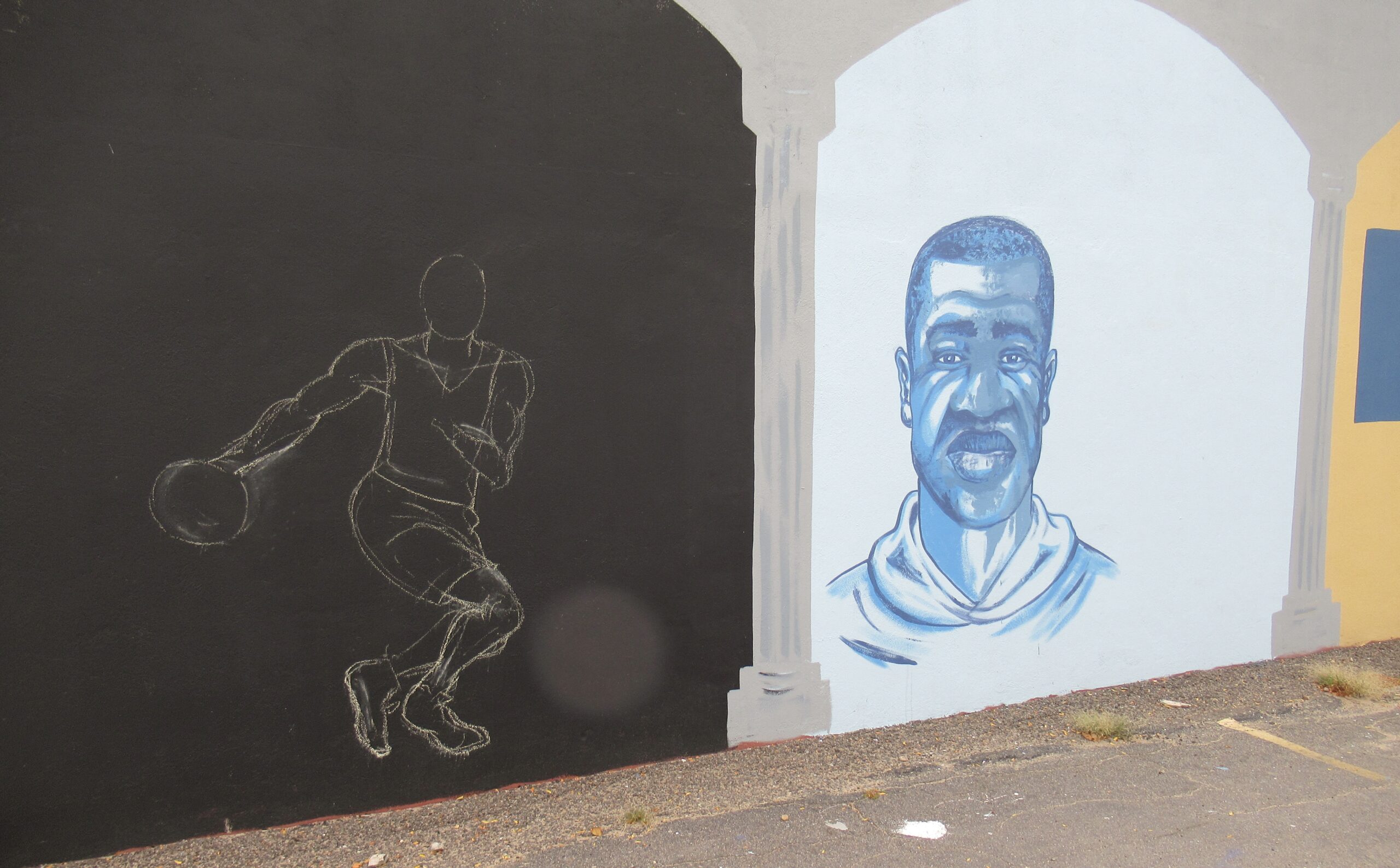