Friday afternoon  we were on the way home from a few days at a lake in northern Minnesota.  At a stoplight, we ended up behind a car, whose decorations caught my attention: 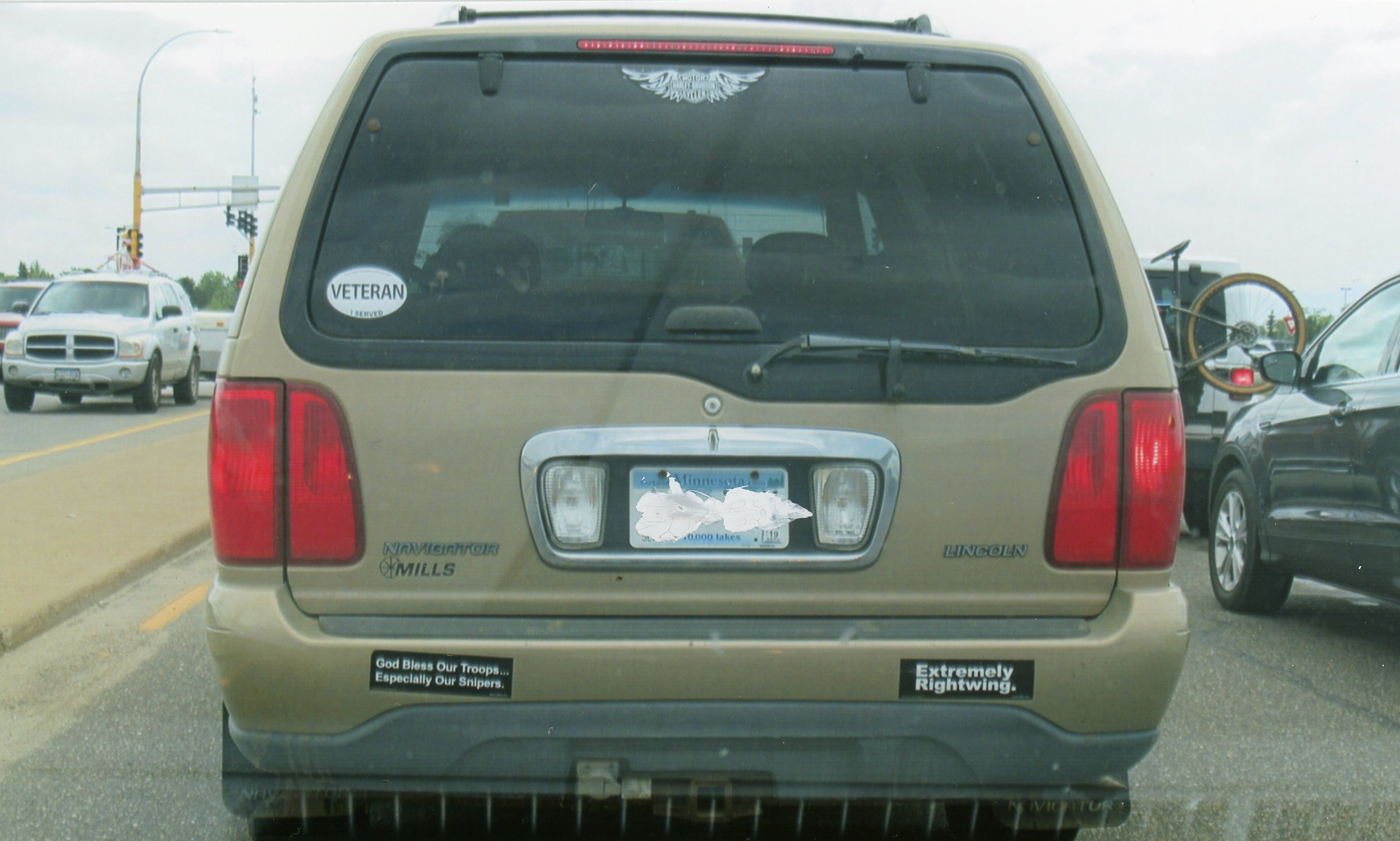 If you can’t read the decals, here they are: “VETERAN”; “God Bless Our Troops, Especially Our Snipers”; “Extremely Rightwing”.  It was a Minnesota license plate, which I’ve whited out.

A day later, the carnage in El Paso, and in Dayton.   Separate but equally pertinent, Jeff sent a very interesting article from the Grand Forks (ND) Herald about the fight among politicians and contractors over the spoils for constructing Trumps border wall across from Mexico.  You can read that here.  One snip from the article: “President Donald Trump has redirected $3.5 billion in Defense Department funds to the border project, promising to build 500 miles of barrier before the 2020 election. [ND U.S. Sen.] Cramer said the president has bestowed him with special responsibilities to oversee progress.”  A ND contractor wants the business and has paid considerable tribute for a big piece of the action.

And on it goes.  If you’re reading this, you’ve been following the news this latest tragic disgrace of “America”, my country, too, sold out to so-called “white nationalism”.

Today commented back to my friend, Norm, who’d written his thoughts to another list, as follows: I’ll basically only say this: Human history is littered with the likes of our current demagogue using conflict as a prop, and young killers as the facilitators.  El Paso and Dayton are the latest examples.  The assorted politicians are simply trying to represent what they think their constituencies demand. The price, their reelection, or not.  You know that.

I’m often led to think back to the duped nationalist, Gavrilo Princip, 19, who assassinated Archduke Franz Ferdinand June 28, 1914, and in so doing lit the smoldering tinder that resulted in the deadly WWI.  Then I think about young zealot and WWI veteran Adolf Hitler, who, at about 30, nursed personal and German grievances about the humiliation and resulting poverty after WWI into what became the Third Reich; the Thousand Year Reich, they said, which lasted about a dozen years more or less.
It never ends well for the tyrant and the zealot, but the public in one way or another facilitates it in all the assorted ways which are so familiar.  “We, the people” are adept at cooking our own goose….
None of us will survive if we let past be prelude and pretend it doesn’t matter whether, or how, we vote, and work within the political process, beforehand.
Thanks for the commentary.  All of these events are awful.  I wonder who will be the next perpetrator, carrying Trumps message of white supremacy. 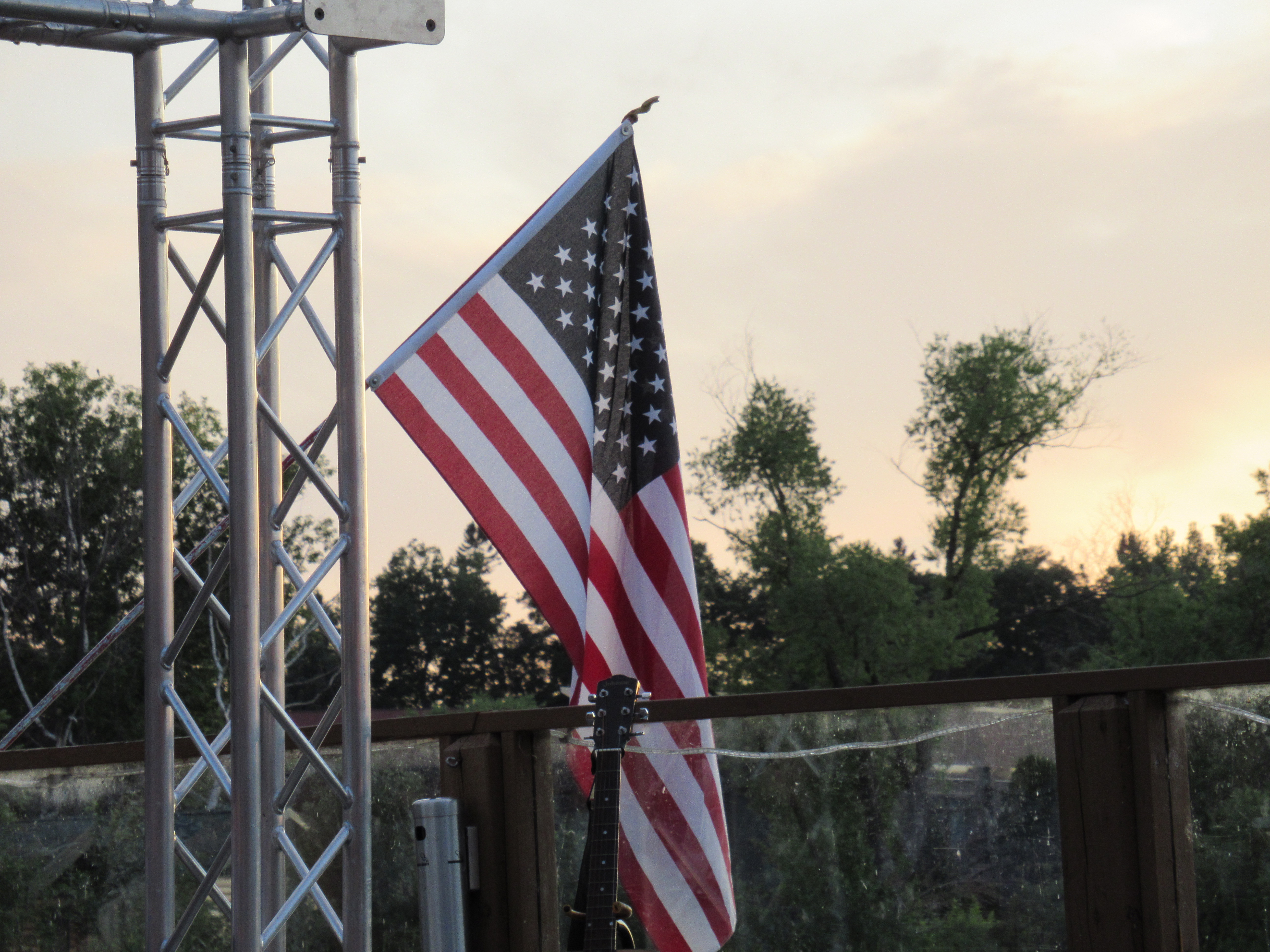 “Crown thy good with brotherhood from sea to shining sea.”

Each year at our resort an Elvis re-enactor (an excellent performer) does a Saturday night program, and this year was no different.  This year, three men showed up with an American flag, and there was a short discussion with “Elvis” before hand, which didn’t seem either tense or friendly; but it didn’t seem part of the plan.  Elvis opened his show with a well done rendition of America the Beautiful, whose lyrics include the “brotherhood” comment.  The show went on.  I don’t think I was the only puzzled witness.  These days, the flag is too often used as a weapon, one side against another.

from Norm: Great observations and comments, Dick!  One difference between the Austrian dupe and the German guy is that Trump was elected by Americans to be their president, something that makes me shudder when I think about it.

from Carol: Comments?  I don’t know why you bothered to white out that car’s license plate.  He wants to make a public statement – let him…(Oh, I see someone beat me to the punch on that comment.)

from Fred:  What a dismal few days. I decided not to listen to the president [no ‘sic’ for the lower case ‘p’ please] read to us the words he was incapable of writing. Later I caught a snippet. Think back to the Army–McCarthy hearings when the gentlemanly Robert Welch, in frustration and disbelief, uttered those great words to Tailgunner Joe:  “Have you no sense of decency, sir. At long last have you left no sense of decency.”  [You can listen to the comment here.]

Better yet, check it out on YouTube along with the commentary regarding McCarthy by the peerless, fearless Edward R. Murrow. Such comments are long past due for the current occupant of 1600.  [Murrow’s comment is here.]

from Dave C (DC):  NOTE from Dick Bernard.  Only the first portion of this very long response is included here.  Most of the ten single spaced pages which followed were data about 37 occurrences between 2010  and 2016 in the United States, all of which were familiar to me.  I sent the entire response to DZ (Dean Z, below).  DC’s first paragraph: “Do your homework DZ. The statistics [no source of data provided by DC] show the number of mass shootings in the United States between 1982 and August 4, 2019, by race and ethnicity of the shooter(s). Between 1982 and August 2019, 64 out of 114 mass shootings were initiated by White shooters. The Las Vegas strip massacre in 2017 had the highest number of victims between 1982 and 2019, with 58 people killed, and over 500 injured. 19 by black, 10 by Latino, eight by Asian and 12 by others. The list below is a list of mass shootings from Jan 2009 and Jan 2017. I am sure you can find a way to blame that on the current President….. wait it must have been Bush’s…. Reagan’s….? Sorry to interrupt your liberal parade.

from Maria: Thank you Dick. My heart is broken.

from Jermitt: Thanks for your comments, Dick.

from Judy: Greetings Dick,  I am always grateful for your words of wisdom.  Thank you for your thoughts in the midst of the tragedy that grips the nation.  Peace, to you.

POSTNOTE, Dick Bernard, after the President visits to Dayton and El Paso, Aug. 7, 2019:   Just Above Sunset, overnight, “Not Wanted”, summed up yesterday, effectively as usual.

There have been a number of private opportunities to engage in off-line conversations since I first sent this post, some support what I say, a few angry and challenging.  By no means, however, do I feel like I felt after 9-11-01, when only 6% of Americans felt like I did, that bombing the hell out of Afghanistan was a lousy idea to resolve a serious issue.  It was a lonely time for someone advocating reconciliation and work for peace.

Relevant to this conversation: If you enter the word “guns” in the search box for this blog, you will find that 72 (of nearly 1500) posts since March 2009 use guns in some way in the article.  Since I write these posts, I can attest that in not a single instance have I advocated for an abolition of guns, though I have never purchased or had a gun in my possession.  I certainly do advocate for regulation of weapons….

In the days since the carnage of last Saturday, I’ve mostly thought of my personal memories of mass murders that made the news.  I’ve done no past research – things like these tend to stick in my mind.

The first two seared into my mind happened in the summer of 1966 :  Richard Speck, who killed the student nurses in Chicago, and Charles Whitman who spread mayhem, shooting people from the bell tower at the University of Texas.  I was in summer school at the UofIllinois at Normal that summer.  The country reeled from these tragedies.

The next that come to mind were, as stated in Just Above Sunset this morning, “the Oklahoma City bombing in 1995 and George W. Bush’s visit to a mosque after the terror attacks of Sept. 11, 2001….”  Columbine in April, 1999, sticks in my mind, vividly, since my son and family lived, and still do, just over a mile from the high school, and I was there, with them, a week after the carnage.  That one was 20 years ago, and ushered in 20 years of carnage.

There’s been a great plenty of wanton killing in this country of ours over the years, but the era in which we are now seems different, in many ways.  It does seem that this can possibly become a time in history where sanctioned terror can in fact have the opposite, and positive, effect.  As a country, we may be getting sick and tired of accepting an evil status quo.

Sure, it does seem hopeless, but as the saying goes, “it’s always darkest right before the dawn.”  It’s up to us to change the conversation – it’s up to us – and make no mistake, that is going to take lots of individual work on our own attitudes.

PRE-NOTE:  Not related to above, but perhaps of interest to some readers.  Al Gore was in Minneapolis for a workshop (here).  In 2005 we had the opportunity to see his talk about An Inconvenient Truth, then in production; and in 2006 we saw the film.  I wrote about both events.  Here: Inconvenient Truth001