Someone asked me about my Mom a few days ago. Esther (Busch) Bernard died August 20, 1981, at age 72, cancer. A few months before her death I turned 41. She was a remarkable person…then again, all persons in their own ways were and are remarkable. We all have our own memories of our own missing persons in our own lives. Likely in that can of human hair I found in the possessions at the North Dakota farm where she was born and raised is some of hers. Today is a time to remember and to reflect.

Happy Mother’s Day to all Mom’s, in all their infinite variations.

A few days ago I featured the quotation of an immensely accomplished mother of six, Eleanor Roosevelt, in a newsletter I edit. Mrs. Roosevelt said this: “Believe in yourself. You gain strength, courage and confidence by every experience in which you stop to look fear in the face…You must do that which you think you cannot do….The future belongs to those who believe in the beauty of their dreams.”
(p. 4, here: CGS News May 2017001)

Among her many accomplishments, Eleanor Roosevelt was the leader who led the process leading to the Universal Declaration of Human Rights by the United Nations in 1948.

Today’s post, however, is about a son, Benjamin Ferencz, 36 years younger than Mrs. Roosevelt, but nonetheless tied together with her by a shared history – WWII. I can only begin to explain by these few words. Perhaps you’ll want to follow up. I didn’t know Mr. Ferencz existed till a week ago.

Yesterday I was organizing a bunch of assorted papers on world peace passed along to me by Joe Schwartzberg, who had previously received them from the family of Martha and Stan Platt, two giants of the twin cities peace community back in the days of Eleanor Roosevelt. The assortment was from the early 1950s to the early 1990s.

The task was one I had avoided for a year or more. There were many musty old file folders, probably from the Platt’s garage, unceremoniously parked in a torn grocery bag, which in turn was placed inside a kitchen garbage bag.

Rummaging through the files among hundreds of items I came across the below letter, referencing a then-upcoming book by Prof. Benjamin Ferencz: 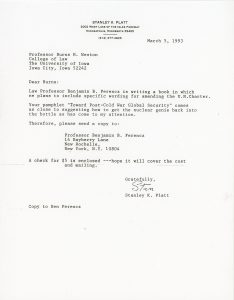 (The book referred to was published, and some copies are still available for the inquiring reader here.)

I knew of Stanley Platt and his wife by reputation, though they are long deceased. I never met either, but they were legendary in peace circles in the U.S.

May 7, long time friend Dr. Joseph Schwartzberg, sent a few of us “this gem of a beautiful interview with Ben Ferencz that [he] just found” which aired on PBS July 14, 2009.

A couple of hours later, CBS “60 Minutes” had a feature segment on the same Ben Ferencz, now 97 and still a stalwart for dealing with the insanity of war.

So, in the space of a week, the unknown Benjamin Ferencz became much more a known in my own life, through a 2009 PBS program, the segment on 60 Minutes, and a 1993 letter.

The quick note is this: a newly minted lawyer as WWII ended, the 27-year old Ferencz happened to draw the short straw as the lawyer who “prosecuted 22 German officers at Nuremberg for murdering over a million people in World War II….” (from the PBS text).

The longer story, accessible in the programs above, is worth your time.

These days, it is easy to feel there is no hope; that individuals and small groups cannot make a difference.

Making a better world takes all of us, women, men, Moms, Dads, boys, girls, all the time.

Margaret Mead said it best, years ago: “Never doubt that a small group of thoughtful, committed citizens can change the world, indeed it is the only thing that ever has.”

To all, everyone, Happy Mother’s Day.

Anne Dunn: “Keeper of the Hair Bowl”, from her book, “Fire... Mark Petty: Witnessing at the United Nations Human Rights Council in Geneva...
Scroll to top