Pre-note: Early in March, Mark Petty who is on a volunteer board with me, announced he’d be absent from our next meeting due to a pending trip with The Advocates for Human Rights. Following his return from the March 18-25 trip to Geneva, Mark filed the following report, which speaks eloquently to a citizen working to make a difference. His report is presented with his permission. Related, Thursday evening in Minneapolis Daniel Wordsworth of the American Refugee Committee will speak. All details are here: Wordsworth May 18 17001 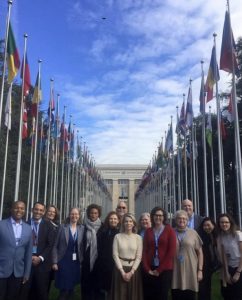 I along with other volunteers of the Advocates, partners and The Advocates staff lobbied more than 100 UN Human Rights Council delegates in March. We traveled to Geneva as part of The Advocates’ work to help end violence against women and the death penalty, and to advance the rights of religious and racial minorities.

While in Geneva, the team met one-on-one with Human Rights Council delegates about recommendations for countries’ Universal Periodic Reviews; delivered 14 oral statements to the Human Rights Council; presented at parallel events on violence against women, human rights in South Africa, and domestic violence legal reform; participated in closed-door briefings with UN treaty bodies, including the Committee on the Rights of Persons with Disabilities and the Human Rights Committee.

“The work of our volunteers at the UN is priceless, from making oral statements, to presenting information to delegates, and so much more,” Jennifer Prestholdt, director of The Advocates’ International Justice Program. “They make a world of difference.”

The Human Rights Council (Council) is the principal United Nations inter-govermental body responsible for strengthening the promotion and protection of human rights. Based in Geneva, the Council is made up of 47 United Nations Member States elected by the General Assembly but all 193 countries in the United Nations plus observers can participate in the Council discussions. Only nongovernmental organizations in consultative status with the United Nations Economic and Social Committee (ECOSOC) can be accredited to participate in the Human Rights Council’s sessions. The Advocates for Human Rights has special consultative status with the United Nations, allowing its representatives to make oral statements at the Council. On behalf of the Advocates for Human Rights, I made an oral statement relating to the Democratic Republic of the Congo (DRC) as part of the Council’s interactive dialogue on the situation of human rights in DRC. The statement, which I made during the discussion of recent increase in political violence in DRC, provided the opportunity for The Advocates to highlight the human rights abuses that force their Congolese asylum clients to seek safety in the U.S. The next paragraph relates to my experience leading up to the delivery of my oral statement on March 22, 2017.

The night before I was to present my oral statement was difficult. I went to bed early but woke up at 11:30 pm and couldn’t fall back to sleep till 3 am. At 8 am, March 22, 2017, we returned to the United Nations. I went upstairs by taking the escalator, passed through security by showing my United Nations badge, entered the Human Rights Council chambers and sat down. Jennifer Prestholdt, the Deputy Director at the Advocates for Human Rights, recommended I listen to what was being discussed in order to know when I would be called. Generally, the order for delivering statements was for the Human Rights Council, then the interested countries, and then the nongovernmental organizations for each country under review. The Ukraine was under review at this point. Earlier that morning I had bought a bottle of water to keep my mouth from drying out. As each person gave his/her statement, my anxiety rose. I looked at the high domed, multicolored ceiling and at the seated delegates around the room. Before I knew it, the water was gone. Now Guinea was under review. Each person called meant a step closer to my deliverance of the oral statement and an increase to my nervousness. The other volunteers and everyone from the Advocates were very supportive. Some thoughts running through my head as I sat there were: “If I mess this up, how would the Advocates react? Would I be allowed to continue my volunteer work?” and “My employer will be seeing this as well…..” During the review of Guinea, I asked Jennifer if I could fill up my water bottle. I was so relieved when she said “yes”. Before I knew it, the Democratic Republic of Congo was under review Statements were presented, and my oral statement drew closer and closer. As I looked down at my bottle, I saw there was a single swig of water inside, and my mouth was dry. I had to save those precious drops of water. The nongovernmental organizations were next. The Advocates were second in line, and the gentleman to my left was just called. As the Advocates’ name was called, I drained the last remnants of water. As I pushed the red button to turn on the microphone and illuminate the red circular light at the end of the microphone, a sudden calmness went through my entire body and then I said “Thank you, Mr. President….”

Video with Mark’s presentation can be seen here. (You need Adobe Flash player to access.) Mark’s statement begins at 1:26:32

“The Advocates for Human Rights thanks the Human Rights Council for its ongoing concern about the human rights situation in the Democratic Republic of Congo (DRC), including recent election-related repression and increased violence by both State actors and armed groups.

“With the help of pro bono attorneys, The Advocates for Human Rights provides free legal services to hundreds of asylum seekers each year. We serve many clients from the DRC who have been forced to flee the human rights abuses. Our Congolese clients have shared with us firsthand accounts that corroborate the continued violence and serious crimes, including sexual violence, committed against civilians by both armed groups and State agents, including security forces and police.

“Our clients from the DRC share their stories of abduction, arrest, detention, interrogation and torture, including kicking, whipping, beating with batons, rape, and prolonged deprivation of food and water. Our clients also report that the situation in the DRC has gotten much worse for those who are actively involved with opposition parties, as well as organizations working to end sexual violence and recruitment of child soldiers in the DRC. They describe threats, intimidation, arrests, detention and restrictions on their movement in violation of their rights to peaceful assembly, opinion and expression.

“The Advocates for Human Rights calls on the Human Rights Council to continue to monitor the security situation in the DRC. The international community should support justice mechanisms that ensure the investigation, prosecution and punishment of human rights violations and serious crimes in the DRC. Further, the Government of the DRC should take immediate steps to begin implementing measures from the agreement to hold elections in 2017, including releasing detained political leaders, civil society activists and journalists.