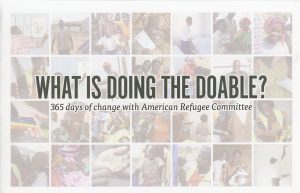 Entire Brochure can be viewed here: ARC – Doing the Doable001

Thursday evening Daniel Wordsworth of the American Refugee Committee (ARC) gave his perspectives on the “Global Refugee Crisis”. It was a powerful evening for the 50 of us in attendance. 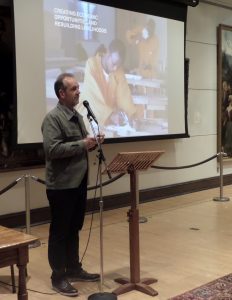 There are tens of thousands of “NGOs” (non-governmental organizations) like ARC. Indeed on a recent podcast I participated in, a lady from South Africa suggested there were 1,000,000* or more NGO’sworld-wide. And I think that seemingly wild estimate is even plausible in this planet of over 7 billion people. ARC, like many NGOs, functionally act as partners for governmental entities, including the United Nations. They work together.

In the end, all that matters are often small – and unsung – groups of folks who care to do good for their fellow inhabitants of this planet we share.

Sometimes the task seems impossible, but then I looked at the people in that room on Thursday night, some of whom I know from their “day jobs” as volunteers in retirement. And whatever discouragement I feel day-to-day is replaced with a renewed sense of optimism – maybe there is good happening.

Indeed, I saw it in the enthusiastic participation of my colleague Mark Petty, whose actions I shared recently. Mark and I are on a Board celebrating French heritage. But I learned of his activism with Advocates for Human Rights when he said he wouldn’t be able to be at our regular meeting – he’d be in Switzerland.

A little earlier, Donna Krisch, who was at the Thursday session, witnessed about her volunteer time with refugees from Central America at a shelter in Texas. Several of her colleague activists from Basilica of St. Mary attended Mr. Wordsworths session with her.

The stories go on and on and on.

Daniel Wordsworth had the requisite power point on Thursday, but his presentation was minimalist, and thus far more powerful (to me) than hundreds of pages of data.

I took no notes on Thursday. I was listening, hard, for well over an hour.

For example, the essential message about refugees, anywhere, any time: they are human beings. They deserve to be treated as such.

In our country, we are endlessly bombarded with stereotype messages inculcating fear of the other. Really, though, they are simply human beings, seeking to survive under sometime terrible conditions.

Mr. Wordsworth shared stories of absolutely heroic efforts by people within the camps (ARC tends to be most active in Africa and the Middle East).

At some point a few years ago, a staff person at ARC made a suggestion at a meeting: let’s ask people on the ground in these camps for ideas. In my recollection, the first reaction was that wouldn’t work – after all, on the ground is constant crisis management.

But the idea to seek ideas persisted, and the first year was very successful, and in each succeeding year has been more and more successful.

One particular slide will stick with me, probably permanently. It was of a man, carrying his young son “piggy back”, looking back at the boy. They were walking away from the photographer.

We were asked to pay attention to this photograph. As I recall, they were at the very end of a 54 day flight from somewhere in the Middle East. The destination, a refugee camp, was in sight. The young boy had just asked his Dad, for perhaps the thousandth time, “are we almost there?” (Parents know that drill!)

The next day, at the destination, tear gas was used. What a welcome.

I got to thinking about our 90-year old friend, Annelee Woodstrom, who is just completing her third book, “And So It Was“, relating to her growing up in Nazi Germany. Her last task has been to choose a cover for the book. The design she chose (which I haven’t seen) apparently shows a girl appearing to walk away in a woods. Annelee said the scene reminded her of near the end of WWII, when she, starving, walked over 90 miles home, sleeping in ditches or wherever, eating whatever could be scavenged. It was an experience that she will never forget.

And she did get home, but then the home in which she had grown up was taken and used for other refugees who were themselves left with nothing.

Human beings are just that, human beings. We must do what we can, small and large, every day,

Thanks ARC and Daniel Wordsworth and everyone who does anything, anytime, for the betterment of our world. 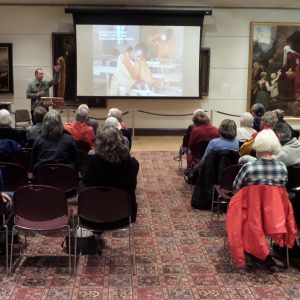 * Even in today’s world of very big numbers, 1,000,000 seems immense. It translates, if taken literally, into a single NGO representing about 7,000 people, and NGOs are rarely only a single person, but small or large groups of persons of similar minds.

For years, I’ve been aware of the line in Bob McCurdy’s “Last Night I Had The Strangest Dream” about “a million copies made”. The line from the 1949 song talks about a million paper copies, of course. When I wanted to give tribute to a couple of persons I thought had gone far beyond the basics, I developed a website which I names AMillionCopies.info. It still exists. Take a look. A million copies is still difficult, but certainly doable.