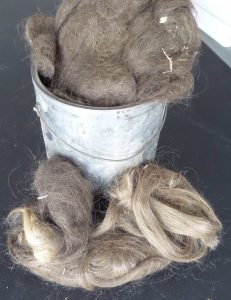 Note: Anne has honored this space with her work on a number of occasions. With her permission, I present this story from her wonderful book Fire in the Village. Ordering information at end of this post. Regarding the photo, see note at the end of this post.

Grandmother died suddenly, as so many had during those difficult days. For that reason, her eldest granddaughter began to clean th old woman’s small tar-papered house by the big lake.

If Grandmother had sold the valuable lakeshore property she would have been a rich woman. But she’d held on to the land so she could leave something for her surviving children. Eventually, however, the land had been divided and bit by bit, it would be lost.

But today her orphaned granddaughter, Rose, would discover an old mystery carefully wrapped and packed in the bottom of a wooden barrel. The barrel was full of rug rags, colorful yarn and remnants of fabrics the old woman had been saving for quilts.

So it was that Rose found herself holding an exquisite bowl. After turning it around several times to admire the shape and design, she looked inside. She was startled to find a long braid of human hair coiled in the bottom of the bowl. It was an old braid from an old person. The braid had been tied at the ends with faded red ribbons. Rose wondered whose hair it was and what her obligations were now that she had become the keeper of the hair bowl.

Thoughtfully she put the bowl and its mysterious contents into a box of things she would keep for herself. Then she went on sorting the rags and folding the fabrics in neat stacks for the giveaway, which would celebrate Grandmother’s life one year from the day of her death.

After the four-day wake and burial, Rose turned her attention to the hair bowl. She fully recognized her responsibility to the hair and decided to seek counsel on the matter.

On a bright spring morning Rose made a bundle of several carefully chosen items from Grandmother’s possessions, put the hair bowl in a bag and went to visit Maggie Sore Eyes.

After a warm greeting followed by three cups of maple-sweetened wild mint tea and four fig cookies, Rose placed the bundle on the table between them. Maggied opened the bundle and found a tin of tobacco, a pair of blanket slippers, an embroidered apron and three skeins of yarn. She smiled at Rose and thanked her.

When the gift had been accepted, Rose showed her the hair bowl. The elder woman lifted the braid and held it in her hands for several long minutes. Then she laid the hair on the table, opened a nearby chest and removed several items.

She placed a large abalone shell, a bundle of sage and a sweetgrass braid on the table. Prayerfully she prepared and lit a cleansing smudge. The women sat together in silence as the shadows of the tall trees crept across the yard.

At last Maggie spoke. “We will be visited in our dreams. After you dream, you must come to me with the hair bowl. I will be waiting for my dream, too. When we receive instructions we will know what we must do.”

Rose was greatly relieved as she walked home late that afternoon.

That night she had her dream. An elder woman, whom she’d never seen before, came to her and said she wanted to give her a gift. Reaching up, the elder cut off one of her braids with a stone blade and held it out to Rose.

When she woke up she dressed quickly and hurried to Maggie’s small house. After sipping a cup of hot coffee, Rose told her dream. The elder woman listened the told her dream to Rose.

Maggie lit the smudge. Together the women prayed for guidance and understanding. Afterwards, they discussed what must be done. They decided to create a ceremony of compassion, burn the hair in a nearby balsam grove and wait.

It took several days to gather everything they needed for the ceremony. When all was ready they went to the grove, performed the ceremony and waited. At last, another woman joined them. Rose recognized her as the woman in her dream. Her braid had been restored and she was pleased. Now she could continue her journey.

For many years Rose kept her own hair in the bowl. She burned the hair under a full moon several times a year.

Eventually she became the mother of several children and her eldest son was married. Tanya, the young bride, was interested in the ceremonies of women.

But before the newlyweds could celebrate their first anniversary, Tanya became ill and Rose prepared a cleansing ceremony for her healing. She also decided to give Tanya the hair bowl. So she presented the gift with a braid of sweet grass inside. Tanya looked into the bowl for a long time. Then she said, ‘I must tell you my dream.”

The young woman spoke softly: “An elder woman came to me. She said she wanted to give me a gift. Then reaching up, she cut off one of her braids and held it out to me.”

Rose was overcome with emotion and turned toward the window to hide her feelings. Then it was that she saw four women standing in the yard. They were her mother, her grandmother, Mattie and the elder woman she had seen in the balsam grove so many years before. The women smiled at Rose, then looked beyond her at Tanya who smiled back. Slowly the four women faded into another dimension and were gone.

Tanya reached across the table to hold Rose’s hand. They sat together in the gathering darkness and thanked the visitors for coming.

Sharing the same dream would enrich their long relationship. The women would enjoy several good years together and many times they would be asked to make ceremonies for the healing, cleansing and guidance of other women and their children.

POST NOTE FROM DICK BERNARD: Anne, longtime friend, sent Fire in the Village to me as a gift a few months ago. Its contents are 75 stories similar to the above.

“Keeper of the Hair Bowl”, at page 195-97, spoke to me immediately. Anne won’t know, till she reads this post, that in the possessions of my last surviving elder from my mothers side, I found in a trunk at the former family farm in North Dakota the container pictured at the beginning of this story. It was a possession that spoke to me, profoundly, but what does one do with a can full of old hair? It has been safely stored in our garage for the past two years.

I took the photograph, without embellishment, on May 8, 2017. For the first time I disturbed the contents to see what was within.

There are no labels with the various cuttings of human hair.

Of course, I have read the story, and it brought tears to my eyes as I read it now.

For any reader who wishes, how would you advise about the future of this can full of hair?

It is one of those treasures without price or money value. Just some old hair…but much, much more than that.

And one of her granddaughters: Tonya….

COMMENTS
from Kathy: My thoughts about the hair-
Many of us who sew or make quilts, save old scraps in hopes of piecing these remnants together someday. Often these scraps get relegated to the back of a closet or put away into boxes or plastic tubs and are soon forgotten in life’s whirlwind.

The hair scraps made me think of the antique hair wreaths I’ve seen in museums. My friend also has a tatted hair wreath displayed in an ornate frame, passed down in her family from the 1800s – bits of hair from family members…a sort of tapestry of family dna samples.

I suspect that’s why your bucket of hair was being saved – a treasure.

Dick Bernard: A visit to the “Canyon of 60 Abandon”; and music in... Dick Bernard: Reflecting on Benjamin Ferencz
Scroll to top