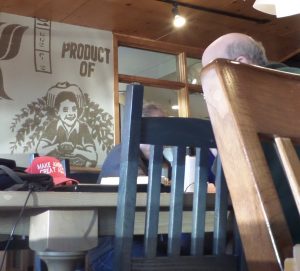 Sidenote to begin: A piece of junk mail today from Brave New Films, with a preview link to the film: “40 people, 50 Questions”. Take the 7 1/2 minutes.

The “repeal and replace” of “Obamacare” is on hold in the Senate.

Last night for the first time in a long while I watched no news at all, and didn’t read the paper this morning. It helps to have a bad cold, but I didn’t miss the parade of spinmeisters.

The summary as best I can understand such things:
1) Repealing Obamacare will make things much, much worse for tens of millions of Americans in terms of access to and affordability of health care. The victims are far beyond just the poor, about to be tossed over a cliff.
2) the tradeoff is massive tax cuts for wealthy people who already have far more than enough.

The Republican “talking points”, nor Trump, who’s a case unto himself, won’t mention either of these; but these are the desired results.

Caveat Emptor (Let the Buyer Beware). Obamacare, with all its faults (which were massaged and exacerbated from the beginning by the Republican leadership), was a great gift to every citizen of this land.

Repealing Obamacare, lowering taxes on the rich, and abundant other schemes, will negatively impact every single one of us, including the rich, even if we keep our own coverage.

How about people who depend on us? Within our own very modest family “fortune” – our inheritance to our heirs, as it were – there goes their inheritance when someone or other, perhaps within family, but not necessarily exclusively, unexpectedly comes on hard times and asks for financial help. I don’t think that we are yet at a place in our society where we’d let someone just die in the street. But….

More money in Scrooge McDuck‘s money bin? (I always liked Scrooge McD cavorting in a bin of investments that seemed full of quarters, when a quarter was a lot of money to a poor kid) helps no one unless it is in circulation to millions who can’t afford to save, and spend every nickel and beyond, maxing out credit cards (if lucky enough to have them) to survive.

Trump is positioned to get even richer, because his primary clientele is the already very rich. You can only make so much with “Make America Great Again” hats (which I have seen only once in public since the election. See beginning of this post.)

What can an ordinary person do? I hear very good things about the group “Indivisible“. Check in there if you want to do something to help. There are many other options.

The solution is by each and every one of us, one action at a time.

Watching a wreck in progress.

We’re not even 150 days into this administration – about 10% – and its difficult to imagine anything other than a catastrophic long term outcome, including with a President Pence, or President Ryan with their own predatory agendas for their narrow special interest… Oh, there will be some who wish for this, but they are not anywhere near the majority of the people of this country. They will learn that Freedom isn’t Free.

From the moment Donald J. Trump descended the gold escalator at the Trump Tower (June 16, 2016), we have known what we were in for; we had ample opportunity to adjust and correct our impressions of this serial liar, for whom the bald-faced lie has long been a part of his winning formula. He won because he reflected every single voters worst instincts, one negative message at a time.

The strategy has worked so far. We did elect him, and it is our responsibility.

In the rational world, if we come across a serial liar in our own circles, we come to believe nothing that the person says.

In the surreal world of American politics, where “we, the people” elected Donald Trump and others, we seem to like the deer in the headlights drama and are transfixed by the performance. Sooner than later it will be too late, and our collective carcasses will have been field dressed and stored. Unlike the deader-than-doornail deer, we’ll be thawed out in time for the next election in about a year and a half. And so it goes.

By then it will be too late, unless we are the “boots on the ground” through groups like Indivisible and the like.

The working press was faced with a quandary when Trump took office. Nobody likes to call a liar, a liar, most certainly not the media.

The problem began with a simple reality: every politician, and every one of us, shades the truth. It is a survival skill; it is expected. We tell “white lies” about each other all the time. The totally honest office holder or Diplomat would not survive if completely transparent. Lying in appropriate circumstances is a necessary survival skill, acknowledged and respected by all parties.

Now we have Donald Trump, the totally dishonest “lyin’ King” for whom the constant and continuous lie is a crucial job skill. He is a hideous role model for our young.

A couple of days ago the New York Times took the issue on. You can read the analysis here.

The same day, appeared an important article in Lawfare, here. entitled “Reading and Taking Seriously the President’s Tweets on Tapes”. The gist of the article is that Trump can reach 107,000,000 Americans on Twitter – that is one third of all of us, about half of adult Americans. And the legal community is now monitoring all tweets of the President for their construction, since not all of the Presidents Tweets are apparently composed by the President. You can read the article yourself.

So, government by Twitter has seemed to replace government by information, and we make judgements based on 144 characters scribed by someone for whom the truth is being irrelevant.

And a last word on lying, from Mitch McConnell, Bipartisanship in the 21st Century. This from a speech three years ago. The only consistency is inconsistency.

If you’re still with me, today’s Just Above Sunset was once again a very good compilation.

COMMENTS:
from Florence: I’m having a hard time being public about my deep feelings about our Republican President. Every day I feel sick that he was elected. Every day I make at least five contacts to elected/government officials with the support and encouragement of our local Indivisible Group. Recently I named for myself the three categories of concerns that I’ll try to be more focused on: Women’s issues (yes, health care is one of them!), Environment, and Voting (including redistricting, a major factor that is mostly over-looked by most voting citizens.)

In my community I’m a small minority, but I know that nearly everyone could easily describe three things that they’ve done to show that they really do care about someone/thing other than themselves. We can have common ground, but still look very differently at the what I’d call the “big picture”. It’s frustrating.

Thanks for sharing your perspective through outsidethewalls.

from Just Above Sunset, overnight: here.

from Don: Dick, I just read your latest piece, and enjoyed it. Fortunately, too much is true, The world does seem to tip upside down.

from Christina: You’ve put a face on all of the rhetoric being thrown around! Thanks. Comments? A couple of quotes: Paul Wellstone- “We all do better when we all do better!”
I’m not sure exactly how this one goes or to whom it is attributed but “The measure of a society is how they treat their most vulnerable.” [Editor: I think this paraphrases a quote by Hubert Humphrey in 1976.

from Mary: Nice comments…..I love it when there are positive anecdotals and we have all been enriched by these family stories! Good day, everyone.

from Dick, responding to Mary: Mary is a sibling of mine, and was responding to an added note I had added to a family letter which included this post. I said this: “Here’s my wonderful poster child for medicaid. (Attached photo from June 25). Heather is Down Syndrome, 41, living with an implanted heart pacemaker since she was four years old. One of those medicaid leeches I suppose (and medical miracles). I have more such stories, just in my own larger family. We all have our stories. When you get down to the real world, it is more difficult to pretend that everybody [else doesn’t] matter. Medicaid is the heart and soul of a either for anything. In their inimitable ways, they enrich lives…Do get involved.” At left is daughter, and sister of Heather, Joni. 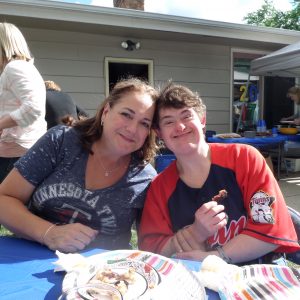 from Annelee: 1947—An insurance salesman came to our home: I heard Kenny say. “We don’t need health insurance.” I agreed. Why would we buy health insurance when every one is covered anyway?
I was shocked into reality when I needed to be hospitalized during a difficult pregnancy and the admittance nurse asked, “Kenney, SINCE YOU HAVE NO INSURANCE, how will you pay?’ [Annelee grew up in Germany, where everyone had health insurance as an entitlement]

from John: Nice posting, Dick, My mother depended on Medicaid in the last years of her life for assisted living. This is a fight for all who care about human needs more than a tax cut for the rich.